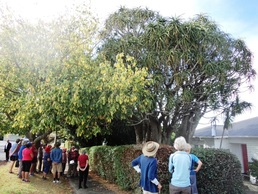 The tallest tree aloe in Auckland.
​​Tree Aloe:   Aloe bainesii
Aloes are mostly native to Africa or the islands off Africa (such as Madagascar). Most tree aloes grow best in warm, dry, arid, climates. A few can do well in a humid climate.  They have colourful flowers and they can flower at different seasons, depending on the location
To be classified as a tree aloe, it must have a clear trunk of at least one meter.  They do not form wood – the trunk has densely packed fibres instead –  so there are no annual rings.
Australian Laurel:   Cryptocarya obovata
A native of Australia, where it’s called a pepperberry, it’s a member of a large family of trees, the Laurels.  The family is represented in NZ by Taraire and Tawa. Camphor, cinnamon and bay are other examples, some of which are used in cooking, others as medicines.
The specimen we saw in Epsom may be at least 125 years old.  It was probably planted by Judge Gillies, a keen Victorian tree collector and president of the Auckland Institute and Museum. 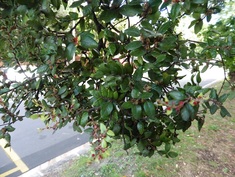 Male black beech tree in flower, seen on the recce in February.
​
​Black Beech:   Nothofgus solandrii
There is a story behind how this tree got to Epsom: it was brought up from the South Island in a sugar bag and planted in a private garden.  Beech grows well in its native climate, but this specimen has not suffered by translocation!
Black beech is evergreen and monoecious.  This tree is a male, with red stamens on its white male flowers.​
​Queensland Kauri:   Agathis robusta
This tree is over 150 years old and was planted by George Bergoyne Owen; it could grow up to 50m in height!  (There is another in Albert Park, overlooking Wellesley Street.)
​Oak:   Quercus spp.
The term oak is used for about 400 species of oak trees and shrubs in the genus Quercus (from Latin "oak tree”). The oaks are native to the northern hemisphere, some are deciduous and others evergreen.  They extend from cold latitudes to tropical Asia and the Americas.
Oaks have spirally arranged leaves, with a lobed margin in many species; some have serrated leaves, others entire leaves with a smooth margin.  The flowers are catkins, produced in spring. The fruit is a nut called an acorn, borne in a cup-like structure; each acorn contains one seed (rarely two or three) and takes 6-18 months to mature, depending on species. The "live oaks" (oaks with evergreen leaves) are not a distinct group.

Nettle Tree:   Celtis australis
This tree is valued as a park or street tree and its spread is as wide as it is high.  The specimen in Outhwaite Park has the characteristic exposed roots near its trunk.   Other Celtis species are native to the Northern Hemisphere.

Moreton Bay Fig:   Ficus macrophylla   (aka Australian banyan)
Well known for its enormous buttress roots, it makes a wonderful playground for kids in the Auckland Domain!  Seed germination usually takes place in the canopy of a host tree and the seedling lives as an epiphyte until its roots establish contact with the ground.
Figs are only pollinated by fig wasps, and fig wasps can only reproduce in fig flowers (obligate mutualism).

Port Jackson Fig:   Ficus rubiginosa   (also a kind of banyan)
Beginning life as a seedling, it also grows on other plants or on rocks, but lacks the huge buttress roots of the Moreton Bay Fig.
Other fig species – Ficus religiosa (aka Bo Tree).  Most of the many edible varieties of fig are cultivars.

Lemon myrtle:   Backhousia citriodora  (aka sweet verbena)
Myrtaceae:  There are about 5650 known species.  Eg. eucalypts, pohutukawa (Metrosideros excelsa), clove, guava, feijoa, jumbu (a delicately flavoured, pink or green tropical fruit).  The leaves of myrtles are evergreen and there is phloem tissue on both sides of the xylem tissue, sandwiching the latter.
The genus Metrosideros occurs in Chile and Argentina also, and all myrtles are native to the southern hemisphere.  In New Zealand we have some lovely flowering myrtles planted as street trees & in gardens and flowering in Summer.
Other myrtles are:  Syzigium maire (Maire tawaki), Melaleuca (paperbark, a health product is made from it) and a mangrove plant called Osbornia found in Borneo, Philippines and Northern Australia, but now threatened due to coastal expansion.

​Silver birch:   Betula pendula
Branches are very supple and therefore droop down, leaves diamond shaped. Reddish bark turns grey with age.  Catkins are gold in autumn.  Many bird and animal species are found in birch forests.
It is not long-lived (lifespan is < 100 years) but due to prolific seed production, it is a good pioneer species after glacial retreats, because its light shade allows nursery plants to grow.

Camphor laurel:   Cinnamomum camphora
With aromatic leaves, this tree is long lived and tends to form single-species communities.  Shallow but dense root system prevents other species from growing under or near it.  Prolific seeding and quick growth makes it a very successful species.  Also, birds and other animals eat the seeds and disperse them.
Beech:    Fagus grandifolia
Good for firewood, making furniture and for smoking ham and some cheeses.  Beechnuts (called mast), though edible, are bitter.  Beechwood tablets were used in Germanic countries for writing on and today, the word for “book” in many European languages is derived from the word “beech.”
Copper beech - Ornamental in parks & gardens, this tree is prized for its bronze coloured leaves that stay the same colour through the year.
NB:  these beeches are a different family from the New Zealand native beech, which is Nothofagus.