DOC describes this as “one of the most spectacular bush tramways ever built”.

​The track follows the Waitawheta River and the tramline used in the early 1900s to extract kauri logs and timber from the area.   It runs for almost 10km from the top of Franklin Road, inland off the Karangahake Gorge.    At the end of the track is the Waitawheta Hut situated on the site of the old sawmill and cookhouse.   This was a step too far for us, we turned around at the 5km mark. 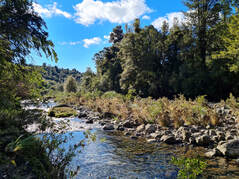 Setting off up Franklin Road,  we townies stopped briefly to watch some pigs make short work of their morning snack (celery!).    Then, after a pleasant if slightly boggy walk across farmland, we entered the bush.

In places we could see remnants of the kauri tramline tracks, plus iron fixings we tried not to trip over.   The track is wide and flat but stony and uneven, meaning sturdy footwear is essential.
​Along the track a number of excellent illustrated information boards told us of the why and how the tramway was built and operated.   Life back in the kauri logging days was brought to life vividly by the heritage photographs and by the quotes from “Ruth’s diary”.   Ruth was a 12 year old girl who lived at the Waitawheta bush camp and worked at the camp cookhouse.   We discovered that many years later, in 2004, 92 year old Ruth returned as guest of honour at the opening of the new Waitawheta Hut!
​It was great to see good boot scrubbing stations and extra gravel being laid on the track to help protect the area from kauri dieback.     And we were delighted to see a number of younger kauri flourishing.

Our walk ended on a high with a close encounter with some kereru that took us all by surprise.

To learn more about bush logging and Ruth's life, see the children's fiction book based on Ruth's diary - Kauri in my Blood by Joanna Orwin 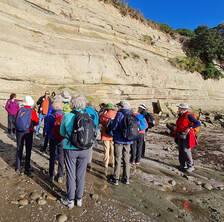 ​After mixed weather all week we were fortunate to have a bright and sunny morning for our walk with 30 club members.
We started our day at Eastern Beach by walking to the north end where geologist, Richard Barker,  explained the rock formation above us, around us and out towards the sea.  After a question from one of our walkers Richard also explained how the eruptions on White Island and Mt Ruapehu occurred. Both quite different events. 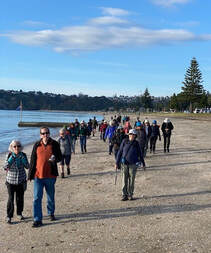 ​
We all showed our appreciation to Richard in the usual way before heading back to the other end of the beach for a brief morning tea stop. The tide was on its way in and it was a very peaceful picnic spot away from the hustle and bustle of the city.

Next we walked up the hill at the back of the small park and followed the path through Macleans Reserve, pausing to learn the history of the Maclean’s farms and the college beside the reserve.
​ 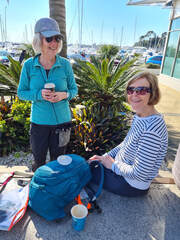 ​We enjoyed the panoramic views towards the Hauraki Gulf and nearby islands.  After coming out of the reserve we crossed Bucklands Beach Rd and continue walking down the road towards Takutaki St and after a right hand turn we proceeded down the steps and onto Little Bucks.

​We had crossed over from one side of the peninsula to the other and then followed the boardwalk ahead around to Half Moon Bay and the marina.   Here walkers enjoyed a very pleasant lunch break sitting in the sun and watching the activity in the estuary and at the nearby cafes.
After lunch  we admired the heritage photos at the ferry terminal before climbing up to the walkway and along the clifftop, stopping now and then to take photos and enjoy the fantastic view out towards the estuary.  At the end of the path our bus driver was waiting to take us in to Howick Village. 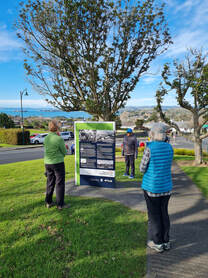 ​On arrival in Howick we climbed Stockade Hill at the beginning of Picton St and learned a brief history of the first settlers and how they lived.  We were given time to look at the site and enjoy another spectacular view out across the gulf and at the surrounding suburbs.

Across the road we viewed the site of the first bus company in Howick. To protect the view Manukau City Council bought this land and transformed it into a beautiful reserve which is used for concerts.  Then we walked through the cemetery of Our Lady Star of the Sea Catholic Church and noted some of the very early graves.

As we continued down Picton St we saw the site of the first hotel, which was burnt down and replaced by another building. The playwright George Bernard Shaw stayed here in one of the early buildings.  Another point of interest was the site of the original Monterey Theatre and nearby we saw the area where the current local market is held each Saturday morning. ​
​The final part of our walk included a viewing of All Saints Church which was built in 1847 and is still used today. Our bus was ready and waiting by Hawthornden Reserve, the site of Colonel Peacock’s home (he supervised the building of Stockade Barracks) and Lieutenant Jack Gandy’s home, Green Gables. An interesting find in Jack Gandy’s garden was an old safe which was used to house ammunition for the Home Guard during World War II.

After a wonderful day with panoramic views,  we all boarded the bus for our journey back to Auckland city.

A big thank you to Elane and Dawn for showing us this lovely part of Auckland!
Text - Elane
Photos -  Dawn, Elane, Praemi, Frankie, Bev, Sharleen