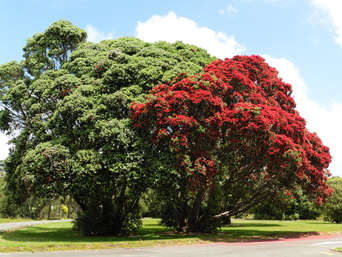 Pohutukawa in all its glory
Today was the final walk of 2015, the year of our 90th anniversary.   Long Bay Regional Park was our choice and it was a good place to hold our Christmas picnic with lots of wide open spaces, shady trees and picnic tables.

We walked the 6km to the Okura River, enjoying the scenery as we passed by Granny's Bay and Pohutukawa Bay on our way along the coast in light rain.   By the time we arrived at the river, the sun had decided to shine and we could tuck into our morning tea on the sand, looking across the river to Dacre Cottage and Stillwater, areas we had walked to earlier in the year.

Once back at our picnic site at Long Bay it was time to relax with a drink or two, a leisurely lunch and a wonderful dessert of chocolate log, pavlova and strawberries organised by Derek and Gail.   It was good to have time to catch up with some members we haven't seen for a while due to illness, and to welcome them back.
So that's it for this year, we look forward to our first walk next year on 17 January and further on to our next weekend away to Coromandel at Easter.

Thanks to Derek and Gail for the very enjoyable day. 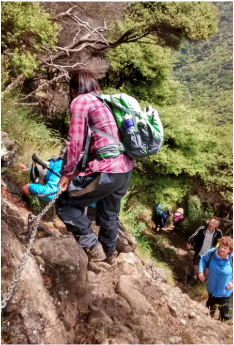 Rain was falling as we arrived at Whatipu, but it stopped before we left the bus and continued to improve.    The A group set off and encountered a large puddle  after about 100 metres, then another at the start of the track so we all had wet feet.   The climb up Gibbons Track was uneventful and the walk along the ridge had good views.   After morning tea we started the descent which was steep but not too slippery.   There were plenty of trees along the side of the track which helped.   The bush and scenery were great.    Then we got to the exciting bit -  a rocky outcrop across the track with a chain embedded to hold on to.  Luckily we all managed to negotiate it without mishap.  Lunch was at the Pararaha campsite behind the beach with views of a waterfall and the rugged hills.  We then had a river crossing which was well above our knees so we once again had wet feet and this time wet trousers as well!  The rest of the walk was through sand dunes then through the historic tunnel at Tunnel Point, this being part of the old railway which transported kauri logs from Karekare to Whatipu Wharf.    We walked on to Karekare via the beach where the bus and the B group of walkers were waiting.

The B group also had an interesting day.  Firstly we walked out to Paratutai Island at Whatipu to see what was left of the old wharf.   Unfortunately we couldn't get all the way to the island because of the seawater so we scrambled up a bank and were able to look down onto the two remaining posts from the wharf.   On the way back we passed the Whatipu Lodge, part of which had been built in 1870 and we were invited in to have a look at the dining room and a cup of tea (couldn't stop as short on time).  A very hospitable host though.  We then drove to Mt Donald McLean and climbed up to the lookout over Whatipu and the Tasman Sea and on the other side up the Manukau Harbour to Onehunga and all of Glenbrook on the right.   We continued on to Karekare by bus via a very scenic route which was lovely and on arrival made our way up to the waterfall which was spectacular because of all the recent rain.   Our time was running out though and we barely made it down to the beach to meet the A team coming in.
Many thanks to Don and Anne for organising and leading these two great walks. 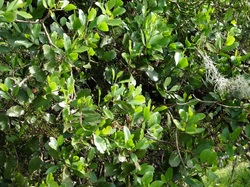 Green mistletoe on a totara branch
It was a beautiful, sunny morning when twenty one members and one guest set off for Mahurangi Regional Park.  Before reaching the park, we stopped to look at some prolific mistletoe growing by the road.  There were several specimens growing on a totara tree and even some growing around a fence, but attached to a nearby tree.

We  then drove to the regional park and, pausing to have a quick look at the seabirds on the shore  (oystercatcher, dottrel) and the numerous ducks hoping for a handout from nearby campers, we set off on the Mita Bay Loop Track.  On a high ridge overlooking Mita Bay we gazed out at the deep blue water, with numerous small boats bobbing around on it.
​Along the ridge were some superb pohutukawa trees with huge “beards” of aerial roots and numerous puriris with their leaves glimmering in the sun.  These two types of tree seemed to grow prolifically in this regional park.
​Returning to the campground area, we set off again in the opposite direction, heading for the Cudlip Point Loop Track.  This, too, was a steep climb out in the open sun, but then we found relief from the sun in the small bush area leading to Cudlip point itself.  Birdsong was heard here and signs that kereru feasted on karaka fruit was found everywhere:  young karaka seedlings popped up all over the bush.  This short bush track went past two magnificent taraire trees, where a pair of kereru were chasing each other.  All too quickly we were back in the sun, heading down to the estuary and along the way we noticed different coprosma species, one with a black-tipped stipule in the leaf axil. 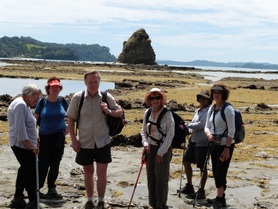 The closest we got to aptly-named Pudding Island

​Walking around Cudlip Point along the beach even at low tide was no picnic, the water still came up to the rocks for a large part of the way.  After walking on rocks for ages, we abandoned any ideas of walking to Pudding Island and stopped on the rocks to have lunch, before completing the walk back to our bus.  However, the rocks along the cliffs and the platforms were fascinating so we had a good look around at them too before stopping for lunch close to an unsuspecting pied shag.
Pudding Island and others like it along this coast were once part of the mainland, but wind and tidal erosion over millenia have created these wonderful landforms.
​We finished the day with an impromptu visit to the Puhoi Cheese Factory, where each one treated themselves to ice cream, coffee or cheese as the fancy took them, before heading back home to mow lawns, plant vegies or water newly sown lawns: an early finish was much appreciated by everyone!
Thanks to Sharleen, Joan and Praemi who organised the day and to Sue, Don and Dhammika for their help on the day.