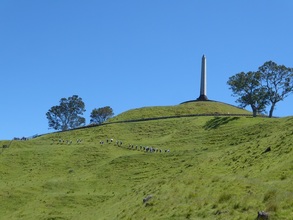 Spot the line of ants halfway up the hill
​Over forty members gathered in Cornwall Park to learn about the history of the development of this wonderful park, such a treasure, enjoyed by so many in Auckland.  Of course, it was not just the history of the park itself, but its natural history too that we learned from Des.
We learned that there was not one but many volcanic cones here and noticed the evidence of early Maori settlement: there is evidence of kumara pits and large areas flattened in order to build shelter for people, food stores and the like.

We heard a number of birds too, enjoying the first Sunday in summer, and even saw a pheasant strutting around fearlessly.  We walked past a grove of wild olive trees (as opposed to those that had been planted), saw a grove of young kauri (surprisingly, not fenced off to protect them from phytophthera) and a grove of eucalyptus trees.

This park is a surprising mix of native and exotic trees:  dawn redwoods, oaks,  cedar, horse chestnuts, karaka, pohutukawa and rewarewa.  We were also interested to see where a large cottonwood tree had fallen the previous week, trapping a woman in her car.
​
At lunchtime we found a shady place  and enjoyed a lovely spread of sweets organised by President Sharleen and Past President Derek.   A BIG thank you.    This “down time” gave everyone a chance to have a chat and exchange good wishes for the holiday season.

Thank you to Des and Derek for the walk and Molly for carrying the loudspeaker so that we could all hear Des in spite of the traffic and the crowds.
Text and photos: Praemi. 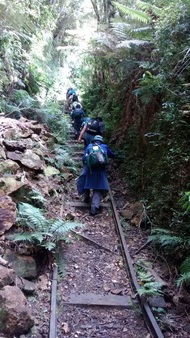 Rather steep!
​A great day had by all.   We started off on the Low Level Loop Track, the original pack-horse track around the gold fields in Waiorongomai.   The B group veered off on the Bendigo Battery site track to look at 'Dawson Superba' or tree moss which grows only in NZ and a little bit in Australia, while the A group continued onto Butlers Incline - 400m long and at 25 degree steep - a challenging climb to the top.

We had two or three streams to cross and very muddy puddles to navigate (after all the rain we have had) and lovely waterfalls to admire plus the remnants of mining equipment, train rails and tunnels to study.

We returned home via Morrinsville and stopped there to admire the forty plus painted fibreglass cows on display to celebrate Morrinsville's centenary.

Many thanks to leaders Anne and Don 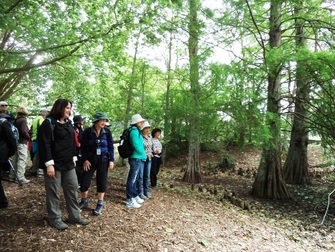 "Knees" of the swamp cypress trees
This walk followed our club’s 91st Annual General Meeting in Western Springs.  After the meeting and a lovely morning tea of homemade scones, we were all ready for some exercise in the sunshine.
Just as we had crossed over the road a green Wellington tram drove along the rails on its way from MOTAT to the zoo entrance, the passengers waving excitedly.

Starting off in Western Springs Park, John led us around the 15 acre lake and down pathways many of us had never walked before. We saw the eels from the bridge and enjoyed watching the antics of the geese, swans and coots with their young. Several geese were extremely vocal in warning us to keep away from their rather cute “babies”.  Brian explained that the green rectangular floating islands tethered round the lakeside help maintain the quality of the water. We paused to look at the swamp cypress with its weird looking conical knees (“breathing roots” or pneumatophores) poking skywards from the underground roots.     John had a short history lesson for us as he outlined the area’s past as Auckland’s source of water for some 25 years in the late 1800s before Auckland’s population growth required dams being built in the Waitakeres to meet the increased demand.

After climbing through bush beside the zoo we saw the three 150 year old wooden houses on Old Mill Road built by the council for the workers in the municipal abattoir across the road, and admired too a row of 90 year old concrete cottages there. Continuing on through Jaggers Bush the track followed  Motions Creek.
Our lunch stop was a leafy spot in Westmere Park beside the harbour’s edge and a welcome chance to chat some more.

On our return the route took us down Leamington Reserve where we could see how the pneumatophores of the NZ mangroves growing in salt water conditions differed from those of the cypress. Then it was across the Seddon fields and past the zoo to follow the secluded path alongside Meola Creek and finally arriving back at our starting point at the Horticultural Council building for an early finish.

Thanks to John for working out such an interesting walk (with help from Fiona and Bev)
Text Sharleen/John,     Photos Sue 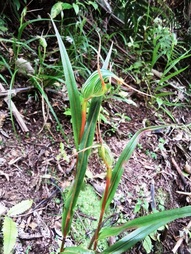 Greenhood orchid on the Wairoa Loop Track
We travelled by bus to the Hunua Ranges Wairoa Dam. As we approached Hunua the road became increasingly undulating, winding between hills with cascading streams flowing through the valleys. The Hunua Ranges extend from sea level to over 600 metres.   The area contains more than half (over 100 species) of New Zealand’s native ferns and related plants.

On arriving in the Hunua Ranges Regional Park it was a short walk along a gravel road to the entry to the Wairoa Loop Track. We ascended through bush for around 40 minutes to the lookout.  Along the way we saw the first of many more greenhood orchids (Pterostylis banksii),  a small rimu tree, and some magnificent rewarewa in flower, with bright red petals and brilliant lime green stamens. There were numerous bird calls, though the birds were well concealed in the trees. The view of the Wairoa Dam from the lookout was limited by the height of the trees, which are obviously growing well.

We followed the path uphill to the Repeater Station, where we stopped for morning tea in a clearing with several rewarewa  in flower adjacent.  We continued along a gravel road,  past impressive views of the Wairoa Dam, and then continued onto the downhill section of the Wairoa Loop Track. This was a long descent, with many steps, and a frequently narrow track, alongside interesting vegetation, streams and small waterfalls. There were numerous patches of greenhood orchids and a spectacular variety of ferns, including several climbing species.

Following a picnic lunch we ascended a gravel track to a short level walk alongside the Wairoa Dam, then started out on the Suspension Bridge Track, following the Wairoa-Cossey Track for the first part.  This took us uphill to another lookout, which provided a good view of the dam, and surrounding vegetation. From here we continued on down some long flights of steps through the regenerating forest.  Again there were many greenhood orchids, also the fleshy tree orchid Drymoanthus adversus in bud  and numerous ferns. It was a rewarding day out.

Thank you to our leaders Sharleen and Elane
Text Viv, photos Sue.