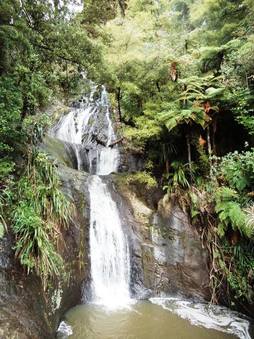 ​
From Tawari Road the A group started off down the Old Coach Road, so named because it was part of the original road from Henderson to the West Coast. Sir William Goodfellow had donated this 70 hectare pocket of bush to the Centennial Park and we shortly reached the Goodfellow Track named after him. Here the virgin bush was lush with miro, rewarewa, rimu, ponga and mamaku tree ferns and lots of smaller ferns too. We stopped for morning tea at a gap in the trees allowing a view north over the city then continued on again noting some big kauri and orchids along the way.

Arriving at the main Fairy Falls Track we proceeded down it meeting the ascending B group which had started from the Mountain Road entrance.   The falls were spectacular after all the recent rain. There are good vantage points to view the water cascading down several drops and we made full use of these as we descended to the bottom. It was thrilling to note how many family groups were taking advantage of this walk in our  wonderful Waitakere Ranges. From the bottom of the falls the track followed along the stream with some four crossings, groups of wheki fern and  another city glimpse framed by tawa.
Raincoats on, we ate our welcome lunches by the informative signs at the Mountain Road entrance before ascending the full length of the Old Coach Road Track and back to the waiting bus.
​
Meanwhile the B group had walked the Spraggs Bush tracks discovering some native orchids and small blue fungi along the way.

Thanks to John & Don for a damp but exciting walk!
Text: John
Photos : Sue 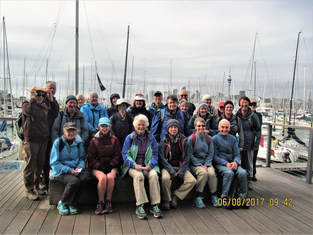 No prizes for guessing where this was taken
With a significant number of historic sites and places of interest to visit, Molly had prepared in-depth notes for the 27 people who gathered at the Ferry Building on this rather grey, drizzly day.
After mentioning the history of the Ferry Building and pointing out the Maori Warrior Sculpture directly across the road, we headed off to Westhaven via two bascule bridges in the Viaduct and Silo Park.  At Silo Park we found Tecomanthe Speciosa, a single plant was discovered on a cliff and out of reach of goats on Three Kings Island in 1945, cuttings have been cultivated and it is now commonly used in gardens.   An unexpected treat awaited the group in Westhaven – Janet managed to obtain permission from the Royal Yacht Squadron for us to view the America’s Cup.  Definitely impressive up close!

We then headed off around the foreshore, under the Harbour Bridge, up into Herne Bay and around to Sentinel Beach.  The weather had by now improved making this an ideal spot for morning tea with great views of Auckland harbour and the Bridge.
​
It was a pleasant walk around to Cox’s Bay with a large number of lovely homes to admire along the way.  Des outlined the industrial history of the bay area – Cashmore Brothers’ sawmill transporting logs and timber using the bay and creek, as well as the growth of Hellaby’s meatworks.
We continued on the path, via the playing fields, up through Hukanui Reserve.  No eels sighted but certainly plenty of mangroves.  On to Ponsonby via a couple of suburban streets, including Pompallier Terrace (named after the first Roman Catholic Bishop of NZ). 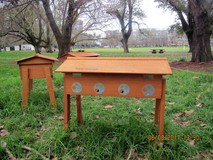 A small park adjacent to Mary’s Café (in the old fire station) on St Mary’s Bay Road was the lunch destination.  Our view from the park was of The Leys Institute, a historic (1905) Edwardian Baroque piece of architecture.  Half the group headed directly down St Mary’s Bay Road to the reserve bordering the northern motorway, whilst the other half opted to make their way down Jacob’s Ladder (originally built in 1800’s to provide access to the foreshore).  The Jacob’s Ladder group stopped in New Street to admire the beautiful St Mary’s chapel built in 1859 and Bishop’s House built in 1894.

​ We met up at the recently installed beehives in Victoria Park, home to 5,000 bees.   The last sector of the walk had us making our way back to the city using the path around the Viaduct Basin.  There were plenty of historic plaques to read along the way and a couple of sculptures to admire as well.

Special thanks to leaders Molly and Linda for a walk with plenty of highlights.
​
Text: Linda, Photos: Molly, Janet 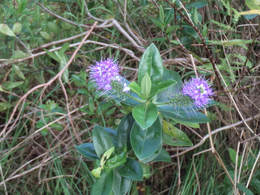 Flowering natives a welcome sight
​Although many parts of Auckland were flooded, twenty five of us were still able to follow the eastern part of the original Maori walking route from Orakei to the Tamaki River.
Starting from Apirana Avenue at the impressive archway entrance to the Eastview Reserve, we followed along the stream as it wound its way through hidden parks in the middle of suburbia. The Taniwha Reserve, the Maybury Reserve where pukeko were enjoying the wet grassy areas, along the Tom Court Memorial walkway stopping to view the Pacific Island themes painted on tyall posts, through an avenue of feijoa trees (no fruit at present), finally crossing Elstree Avenue to squelch along the Point England School fence-line and cross the Point England Reserve to the shore of the Tamaki River for our welcome cuppa. Restarting north on the shell walkway along the Tamaki River shoreline (the tide was out) with pied stilts, grey herons and seagulls spotted (but no oyster catchers), we crossed a bridge and continued in shade on the bush tracks of the Waiotaki Nature Reserve.
​Presently we reached the Tahuna Torea Reserve with its informative signs. eg.”Pukeko live in family groups with several males and a small number of females. Only the males build the big nests but help sit on the 4 – 5 eggs. They can fly and are good swimmers. They feed on soft vegetation, insects and eels”.   Other birds heard here included tui and grey warbler.
In 1982, a Glendowie School year 4 class had planted nikau, puriri, karaka, totara, taraire and included three kahikatea “The Three Sisters” which are now magnificent 35 year old specimens. 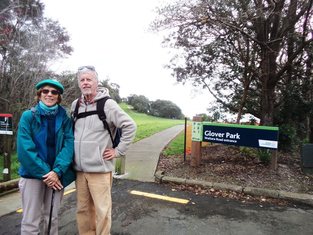 Babeth and Philippe
​
​After lunch in the Roberta Reserve at Glendowie,  we walked along paths through the more open Churchill Park (American soldiers camped here during WW11) to be treated to the birds-eye view of the Hauraki Gulf islands as we were finishing at Glover Park – the crater of an extinct volcano.
A shortish day’s outing in mid-winter, full of interest.

​Thank you to John and Joan for putting together a great walk. 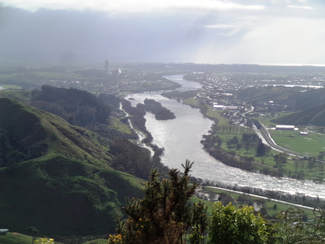 Waikato River and Huntly from the lookout

​This walk was a late addition to our programme and replaced another walk which had proved to be unsuitable when the recce was done.  It is always disappointing when a planned walk has to be abandoned, but we remind ourselves that this is why we do recces, checking bus access and parking and suitability and safety of the tracks, amongst other things.
As often happens the day promised to be showery and bleak, but actually we managed to dodge the showers and even had some sunshine! 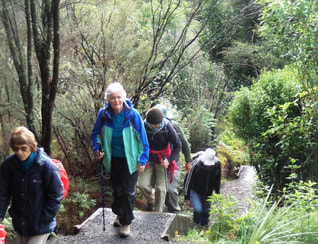 Steps and more steps!
​After the obligatory spraying of our boots we started out from the carpark on Parker Road, stretching our legs and getting the heart rates up climbing a long flight of steps.  At the bottom of the steps was a pile of bags of shingle for the ongoing job of keeping the track in good condition, and the suggestion that if you want to test your fitness here is your chance to carry a bag up as far as you can and leave it beside the track to help out the DOC workers.  I could be wrong but I didn’t see any takers!!
​
Half an hour later we were at the junction where we turned right onto the loop track.   A group of well-labelled native trees here gave us the opportunity to have a close look at some young trees.   We were really pleased with how well our new portable voice amplifiers worked in the bush.  Those at the back could hear John clearly as he talked about the trees.  Thanks again to Katherine for donating these to the club. 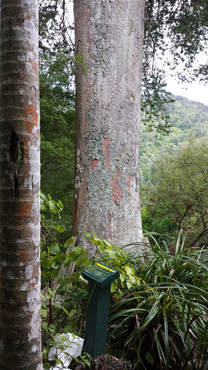 Kauri Loop Track, this kauri estimated to be 1000 years old
Further on we came to one of our favourite old kauri, this one estimated to be 1000 years old, and a great spot for a photograph.  The track continued on through a grove of young kauri (rickers) to a lovely viewpoint out across the forest and the perfect spot for a morning tea break.   A few decided that they had walked up enough steps and returned the same way, the rest continued onwards and upwards to another lookout, this one north over Huntly,  the north Waikato Lakes and the Waikato River.
​
The river was a silver ribbon in the winter sunlight and mist shrouded the distant landscape -  a lovely view and perfect for an extended stop.  The fittest of the group then took off and climbed another 20 minutes in rougher and muddier conditions to the southern lookout with views over Hamilton and to Tongariro National Park on a clear day.

​Once back at the bus (some of us more than a bit muddy!)  it was off to Lake Hakanoa in Huntly for a quick lunch and comfort stop.   The resident flock of Canada Geese cruising  on the lake intrigued our driver, Okie, the first time he had seen them. 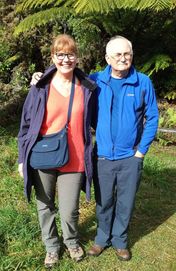 No trip south is complete without a Pokeno icecream which was enjoyed by all, especially our two British guests, Keith and Angela, keen walkers and Lions Tour supporters, now back home.    Lovely to have had your company and thank you for the NZ birds field guide you gave us.
​
A big thank you to John and Elane for making this walk happen at short notice, a good winter walk.