Twentyfive walkers had booked to walk the hilly farmland of the Karamu North Walkway, so there was much relief when on Sunday the rain had stopped.

​The bus arrived at the Four Brothers Reserve entrance to find the car park deserted. After a quick morning tea we started up on a well formed track through a special section of lush Waikato bush, with rewarewa, tree ferns, nikau, parataniwha  etc.etc.
​After about 20 minutes we were out of the bush, climbing over the stile at the start of the Karamu Walkway itself. From here as we walked along the ridges we looked out over the Waikato Basin and Hamilton to the east.  We pressed on, more undulations, a steepish downhill section where sticks were useful, another stile, all along the way we were provided with 360 degree views over the open farmland.
We stopped in a sheltered spot for lunch overlooking several limestone outcrops - these proving that New Zealand was once covered by the sea.  To avoid the worst of the slippery clay section of walkway we turned back after lunch and returned through the bush to the waiting bus.   ​
​.   As the cloud lifted to the west the sails of the Te Uku Wind Farm could be seen, relentlessly turning in the high wind, generating enough power to supply Hamilton.
​ We then went on towards Raglan to the magnificent Bridal Veil Falls.  This is a very spectacular sight with its 49 metre drop after all the rain. Unfortunately the bride must have slipped over in the muddy section of the Karamu North Track hence the brown colour of the 5 metre deep pool at the bottom of the falls! 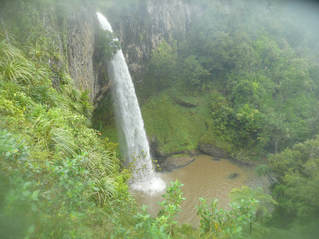 The impressive Bridal Veil Falls.
Another great Club day out in the fresh air.  And of course a trip south is never the same without an ice cream stop at Pokeno on the way home.

Thank you to John and Don our walk leaders today, who coped with so many changes of plan.
​Text: John; Photos: Bev, John, Praemi 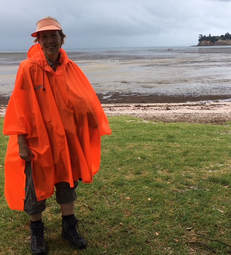 Anne was well prepared for the rain that was predicted!

Well, mad dogs and Englishmen go out in the midday sun,
but we went out  in the rain without any dogs!

Despite the inclement conditions our group of 29 keen walkers set off to the start of the Heritage Track where having gone through the predator proof fence by means of a special gate, we  had an early morning tea,  walking shoes sprayed to prevent spread of Kauri die back  and  a chance to read the information boards  provided.  There was a good deal of information about the birds and plants we could encounter on our way.

​
​The Heritage Track took us first through Waterfall Gully, an area of remnant forest, with its taraire, tawaroa, karaka, pohutukawa and puriri with small patches of kauri forest on the upper slopes.
​
​
Whether you have visited this park before or it is a new experience, it is well worth stopping to view the Hauraki Gulf from this angle, the brooding clouds over the sea and the islands with their history and secrets. In order to get our bearings and check the names of the outer islands we could consult the map provided up on the lookout.
​Taking it slowly on the wet downhill Lookout Track we made our way to Te Haruhi Bay, along the beach.   After a short steep climb on the Okoromai Track, we could view the sweep of the bay below. The track then lead us through pasture and past surprised looking cows. 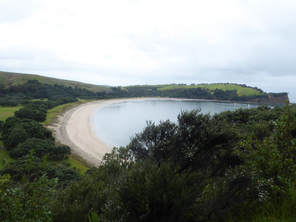 Yet another stunning view!
​From here it was down the hill again, to another gate in the predator proof fence and along the beach to Okoromai Bay. As the tide was out we had the opportunity to observe dotterels (tūturiwhatu), stilts (poaka) and white-faced herons (matuku-moana). 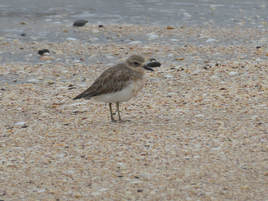 Dotterels are very hard to spot on a sandy beach: they are so well camouflaged!
This was a good place for us to stop and have lunch before picking up the Heritage Track again which went around the edge of the wetlands area and back to our bus.
​By now some of the group were happy to rest on the bus while the rest of us walked a track right around the Okoromai wetland area. Manuka, flax, cabbage trees, species of glasswort, salt marsh ribbon wood and mangroves all flourish here. The various low growing sedge grasses with their muted colours, were a pretty sight in the now warm sunshine. 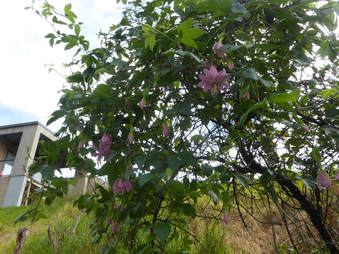 The very unwelcome banana passion fruit vine!
We are lucky to have such an interesting well maintained park so close to the city. So we were not so mad after all setting off in the rain! Next time we may see some of the many native lizards that shelter there and also those cute quail which are so elusive.
A big Thank You to Fiona, our sole leader today, who stepped into the breach left by Shirley's domestic accident.
Report: Fiona;  Photos: Praemi 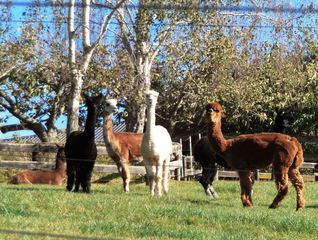 Alpacas of many different colours at Awaawaroa.
​Forty of us set off on a fine morning for Awaawaroa Alpaca Farm, in the rolling hills near Pukekohe. We were greeted by Bruce and Lynda Mathews, who provided a most interesting and informative session on alpacas.
​
​We particularly enjoyed seeing the young alpacas with their mothers, and discovered how gentle and intelligent they are. We saw both huacaya and suri alpacas, in a wide range of colours, and many products made from alpaca wool. We also appreciated the delicious morning tea they provided.
​We then went to Henry’s Reserve in Patumahoe. On entering the walkway we immediately heard the nearby waterfall and tuis in the trees overhead.
​
The track led downhill through a forest dominated by taraire, easily identified by the numerous dead leaves on the ground. Other trees we saw included tawa, totara, puriri, kahikatea, rimu and pukatea, with smaller kawakawa, mahoe and nikau, where we saw some friendly fantails. 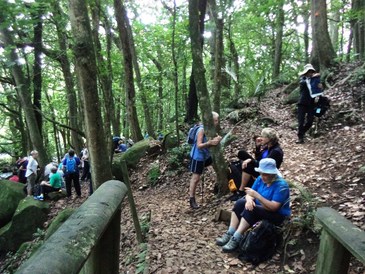 Our leaders found the most beautiful setting for our lunch break.


​We proceeded to the viewing platform, then sat on the rocks to eat lunch adjacent to the lower cascades of the stream, below the waterfall.
​Following this we proceeded to Clive Howe Road Reserve walkway, also in Patumahoe. This walkway benefits from community involvement, and we were impressed by the tidy grass approach, the stones which had been placed around the Sacred Spring by local school children, Puff’s seat and the numerous markers which helped us find our way along the undulating trail, which meandered through the bush, passing under branches and over streams.  The forest floor here was littered with mahoe leaf skeletons which looked as if they were made of lace.
Finally we stopped in Patumahoe village for welcome ice creams, before heading back to Auckland.
A big Thank You to our leaders Elane and Vivien.
Photos: Sue  and Praemi; text:Vivien. 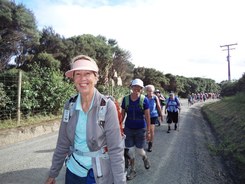 Anne leading the group
​Another wonderful day with the Auckland Natural History Club, this time out at Muriwai and Goldies Bush.    Firstly we did a bush walk from Constable Rd down to the Mokoroa Stream and swing bridge.  We were impressed with the standard of the track upgrade, well formed steps and shingle surfaces throughout.

Mindful of the huge problem of kauri dieback, we were careful to stay on the track and thoroughly cleaned and sprayed our boots and pole tips as we entered and exited the bush.   There were several stands of young kauri beside the track and although there were numerous steps (hundreds)  our eyes were soon distracted by the lovely bush.

​
The stream was a great spot for morning tea and once 'fuelled up' we were able to face the numerous steps back up to the bus. 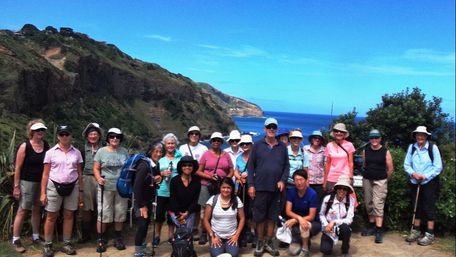 Thanks to leaders Derek and Anne for a lovely day.
Photos:  Sue and Sharleen
Text: Anne