We had the most beautiful day for our meander around Helensville  After alighting from the bus, we wandered around the very old but interesting Helensville cemetery.  All 27 of us then strolled down Garfield Road and walked up side streets, pausing at various historic buildings along the way to read the plaques outside significant buildings.  Morning tea was held opposite the Regent Theatre, where members went inside to peruse the antiques.  As we made our way to the railway station, two gentlemen from the Model Railway Society offered to open the doors for us to do a tour. Very interesting interlude.
Lunch was on the jetty overlooking the Kaipara River observing some birdlife. Finally a lovely stroll along the river walkway to the Helensville Pioneer Museum where there was many a memory shared by all of our members.
A very fascinating place to spend time.
Trallea did a great job leading this walk and wants to thank those who helped on the day. Thanks Trallea. 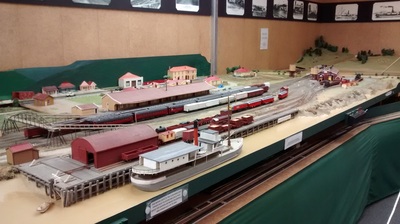 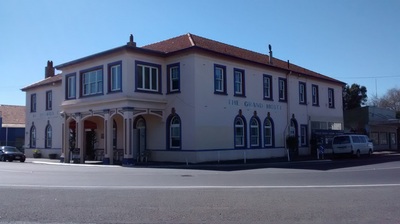 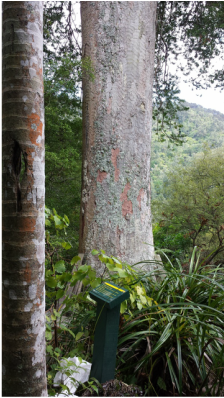 1000 year old giant kauri
Two lovely walks today in the Hakarimata Scenic Reserve near Ngaruawahia.  There are a number of tracks in this range but we chose to do the Kauri Loop Track at the northern end and then the waterworks Walk further south.  Starting from the Parker Road carpark, we made our way up a long flight of steps to the Kauri Loop Track junction.  We were amused (but not tempted) at the challenge from DOC staff to test your fitness by seeing how far up the track you could  carry their bags of shingle  (to save them some work!!).  One of the largest kauri trees in the Waikato, estimated to be 1000 years old, was a great stopping off point, and a little further on we passed through a grove of young kauri known as 'rickers'.  There were several wonderful lookout points on this walk with views over Huntly and the north Waikato lakes, and south to Hamilton and Tongariro National Park on a clear day,  making it well worth the climb.
Our second walk was the beautiful and historic Waterworks Track, just an hour there and back and easy walking alongside the Mangarata Stream with its tumbling waterfalls and luxuriant ferns.   At the end of the walk was the old dam which supplied Ngaruawahia's water from the 1920s.
Thanks to John and Brenda for organising this walk. 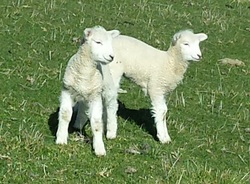 A good day was had by all.  The weather was fine for most of the walk, just a couple of brief, light showers which didn't bother anyone.   We went into the park from the Waterfall Gully end, through bush and up to the lookout for morning tea.   We then continued on the Tiritiri Track (with a short unplanned detour past the remote-controlled model airplane enthusiasts flying their planes) and spent a few minutes watching and dodging the planes.   Great views of Tiritiri and the Gulf and a chance to get that Spring feeling watching the antics of all the lambs - lot of twins and even triplets!
Then on down to Te Haruhi Bay for a leisurely lunch where the bus was waiting for us  Some elected to stay with the bus, the rest continuing on the Lookout Track and the Heritage Trail Track back to the carpark at Army Bay.
Thank you to Elizabeth and Wendy for a lovely day. 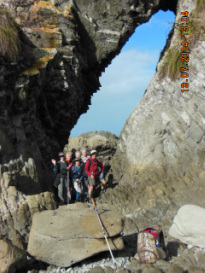 The 'eye of the needle'
The Mangawahi Beach and clifftop walk was blessed with sunshine and calm - a gem of a day following a week of easterly storms.

Together our small band set off along the beach, however due to the tide being on the high side, we met our first rocky obstacle which naturally created our 'A' and 'B' separation.   The 'A' walkers continued along the beach until we reached the track entrance and climbed the 200-odd steps to the top of the ridge.   Following the track along the clifftop we experienced amazing views north and south along the coastline, as well as out to sea to the Hen and Chickens and Little Barrier Islands.

The track took us through varying native bush of Nikau palms in berry, Mingimingi, stunted Manuka ('m' for 'mean' because the leaves are sharp) and Kanuka ('k' for 'kind' because the leaves are soft), Taraire, Totara, Puriri, Pohutukawa and many more types of vegetation that can cope with the harsh coastal environment.  Once down on the beach we arrived at our lunch stop and first amazing rock formation called 'the keyhole' or 'the eye of the needle' - like Alice in Wonderland we stepped through the keyhole into a coastal treasure trove of rocky outcrops, sand and pebble bays, old dead trees petrified into a rock cliff, shell drifts and sadly too many beautiful little birds (we think Prions) that did not survive the storm.

At the other end of the beach our intrepid 'B' walkers had opted for a number of adventures: first being a steep incline  from the carpark, battling with a slightly overgrown, lesser-used track to enjoy an elevated view of Mangawhai Heads and inlet, followed by a climb up the bush covered knoll behind the surf club to enjoy a different angle of the Heads and the sand bank inlet.  With receding tide they set off along the beach once more, skirting the rocky outcrops which had amazing pale green pounamu type stone set into the seaside rocks, to arrive at the track entrance, ascending the 200-odd steps and arriving at the lookout to enjoy the truly spectacular view of the coastline.

Our final treat for the day was a visit to the Bennetts Chocolate Factory and cafe in Mangawhai Village - good company, exercise, fresh air, chocolate and coffee - can't get better than that.
Thank you for your support, welcome to our two new walkers and I do hope you all enjoyed this day at Mangawhai.
From Lynne and team.

Thank you Lynne and helpers for this great walk.