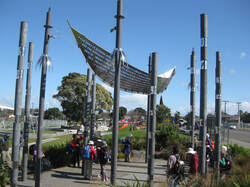 Memorial to David Lange
​Today we enjoyed a ramble over historic Mt Richmond in Otahuhu, followed by a trail along the old Maori portage route and visits to some other significant parts of the area.

Some of the magnificent trees on Mt Richmond date back to the 1890s and tower over the two volcanic craters, kumara pits and the terraced remains of the pa.  From the summit we could see for miles out over the surrounding area.

A visit to the old cemetery revealed some interesting stories (including a grisly 19th century murder) and prompted thoughts of  the fencibles who settled in Otahuhu in the 1840s.   We then journeyed down Portage Road, feeling grateful that we weren't hauling our waka as the Maori did in order to get from the Tamaki River to the Manukau Harbour (over the narrowest part of New Zealand).

Our next significant stop was at the sculpture which commemorates the life of David Lange, New Zealands youngest Prime Minister at the time, from 1984 - 1989.   This stunning piece of sculpture is by Virginia King and we spent time admiring the symbolism and artistry of this work so well situated in its beautifully landscaped location on Mason Avenue.

Next on our trail was the famous triangle of land on the corner of the Great South Road and Mangere Rd where three war memorial monuments are sited - the Nixon Monument, the Mounted Soldier and the Railway Workshops sundial memorial.       Close by, and our final stop, was the Lao Buddhist temple in Nixon Avenue.   Attracting our interest here was a very unusual tree - the Bo tree, or sacred fig (Ficus religiosa).   These trees are said to be descended from the original tree under which Buddha received enlightenment.

Thanks to Fiona and Sharleen for leading this walk and to Praemi for her research. 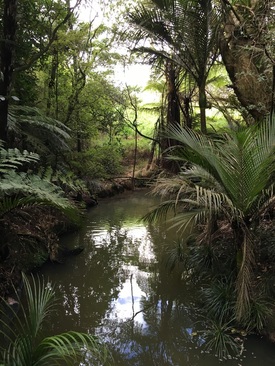 Murphy's Bush
On Sunday 14th August thirty one club members and visitors enjoyed walks to three reserves in the South Auckland area. The walks were each about one hour in length and we were lucky to have fine weather.

The first walk was in Murphy’s Bush which is out in the Flat Bush area of Auckland. This bush reserve is a beautiful podocarp broadleaf forest with several examples of tall kahikatea trees and a giant totara. Originally the reserve was part of a farm but much of the land was sold off for housing.  We appreciated being able to walk through the reserve and appreciate the quiet atmosphere and some birdsong in spite of the proximity to housing and a busy road.
​
Then it was on to the Puhinui Reserve which is bounded by the Puhinui stream in the east and the Manukau Harbour in the west. It was an important place for the gathering of food, craft and medicinal resources, and shelter for the settlement and gardens to the east by Maori in pre-European times.  We enjoyed a walk to the lookout across open fields where there are two equestrian events annually. Some of the horse jumps looked very challenging indeed. A bonus was being able to cheer on the mountain bikers racing around the crater where the show jumping takes place at equestrian events.

Our final visit was to the Otuataua Stonefields. We walked along the Watercare walkway towards the stonefields, appreciating the stone wall remnants and remains of food storage pits used by Maori. Also European farmers settled here and built stone walls to contain their sheep and cattle. We returned along the coastal part of the walkway which had lovely views of the Manukau Harbour at low tide. Bev, one of our members, spotted a skylark and pointed it out to us.
These walks were relatively easy as the terrain was mostly flat and there were very few steps so it suited people of varying fitness levels.
Thanks to Joan and Janet, our leaders for the day. 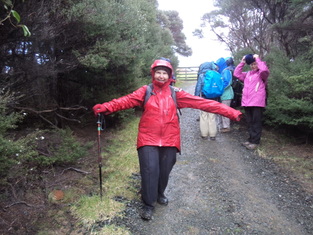 Margaret - Happiness is being dressed for the weather!

​A great day was enjoyed by all at Tawharanui Regional Park, an open sanctuary and marine reserve.  First off we had Dr Richard Taylor, university lecturer and researcher at the Leigh Marine Reserve Laboratory, talk to us about the marine reserve and creatures of the intertidal area.  A very interesting and knowledgeable person, it was unfortunate that the inclement weather cut it short.

Despite the wind and rain our walk over many good tracks (beach, bush, and farmland) at Tawharanui was great.    We were able to appreciate the fabulous views out to the islands of the Hauraki Gulf, the huge amount of native planting that has been done and enjoy hearing and seeing amazing bird life, such as takahe, kereru,  bellbirds and the noisy saddleback.   A great Regional Park.
Thanks to Molly and Anne for an excellent walk. 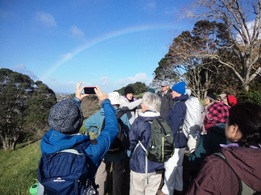 We began our trip by looking up at Mt Albert and envisioning the ballast line that sent quarried scoria hurtling down the mountainside. The noise of the rocks, the smell of the fumes from the machinery and the rattling rail wagons, drove the early settlers to write many letters of complaint to the Railway Board. Mt Albert was quarried for 88 years to provide ballast for the railway from Auckland to Helensville as well as fill for many roads. Later in 1959, the scoria was used again to form the Northwest Motorway, all of which caused the Mountain to lose a third of its height.
We continued up to the top of the Mountain, where we looked down towards the Waterview Interchange and Meola Reef. 50,000 years ago lava had flown in these two directions, although, it was interesting to learn that Mt St John had originally formed the reef.
Our views to the north, to Kingsland, gave us an idea of the extent of the land that Allen Kerr Taylor had bought and then subsequently sold for small farms and housing. Throughout the rest of our walk, we continued to meet these early settlers, viewing their homes, street names and hearing about who became the mayors of the largest borough in New Zealand.
Another place of historical significance was the original Karitane hospital, formerly the Caughey Mansion and now Hebron School. We also saw the site of one of three Industrial Schools in NZ. At this time delinquent children were sent to jail and later, along with neglected and orphaned children, they lived in a large old house to be trained to become useful members of society. This site is now the Alice Wylie Reserve, which also has a huge bronze statue which recognises the strength and endeavours of women.
A resident who had a major impact on Auckland, was Arnold Turner who became the inaugural Chair of the ARA Centennial Park and Regional Reserves Committee.
We entered the quiet, tranquillity of St Luke’s church and it’s graveyard behind, where many of the early settlers’ graves can be found, including a large monument for the Kerr Taylor Family.
After a long board walk opposite the St Lukes Shopping area, we progressed to Mt Albert Grammar School and walked up to its ASB School Farm. This small oasis in the middle of the city has just had its 99 year lease renewed.
We concluded our trip with a talk by the curator of Alberton House, the former Kerr Taylor residence. Here the group of 21 were free to walk around and admire the Christmas decorations of yesteryear.
Researched from many Mt Albert Historical Society newsletters and the book, “In Old Mt Albert’ by Duck Scott.

Text: Ruth
Photos: Sue
​Thanks to Ruth and Elane for organising this great walk.