28 July -  Tawharanui Regional Park
​The Ecology Trail was being upgraded so we took the Ecology Trail Alternative Track. It crosses a wooden bridge on the top of a small dam built by the Americans during the war to supply their camp. The track meets a farm road by which we returned to the Hut. Some of us took a short but steep grassy track opposite the hut onto a promontory giving a good view of the beach. The waters off here have been a marine reserve since 1981. 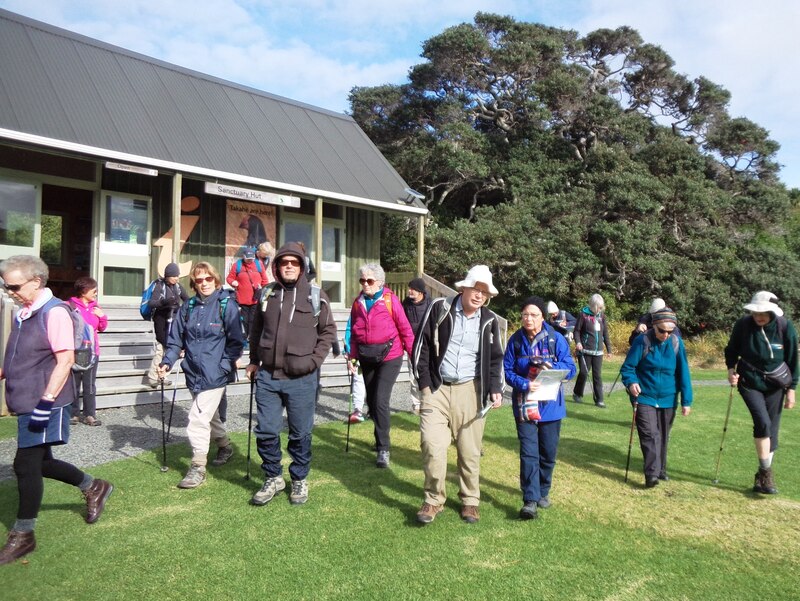 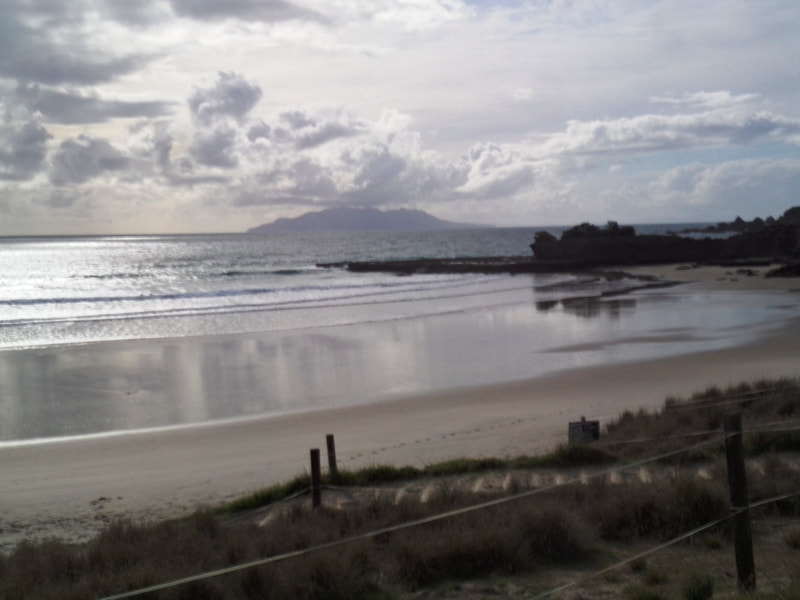 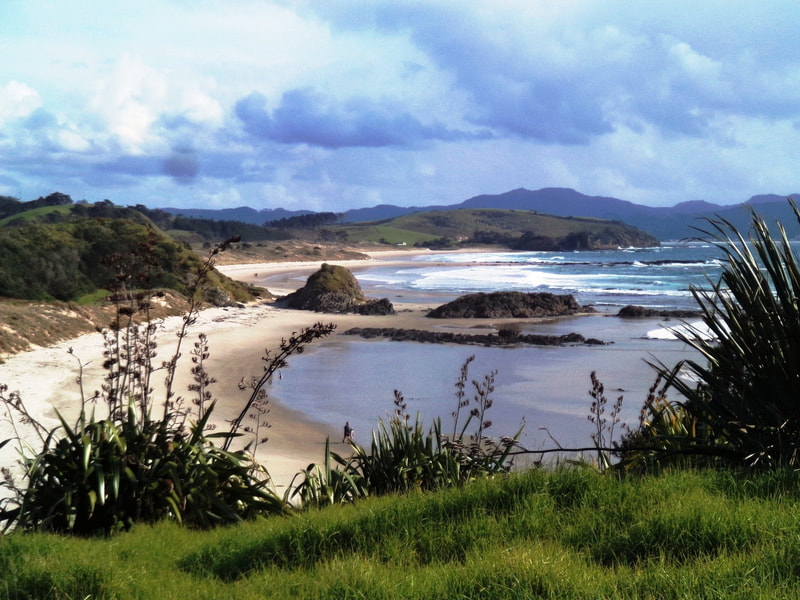 ​The West End track heads inland from here through a flat field beneath hills. There were cattle in this field but we didn't see any more on our walk. The track leaves the sanctuary through a double gated cage with boot cleaning facilities. From here there is a climb of about 500 metres to another gate back into the sanctuary. We needed to find a place for lunch but the open fields up here were exposed and breezy. We turned right onto the Mangatawhiri Track which dipped below the ridge and gave us a good place to stop. 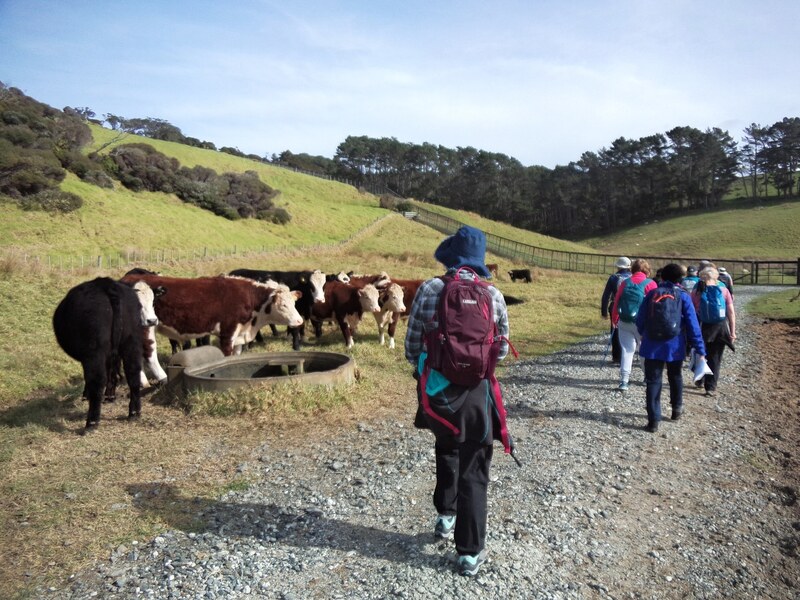 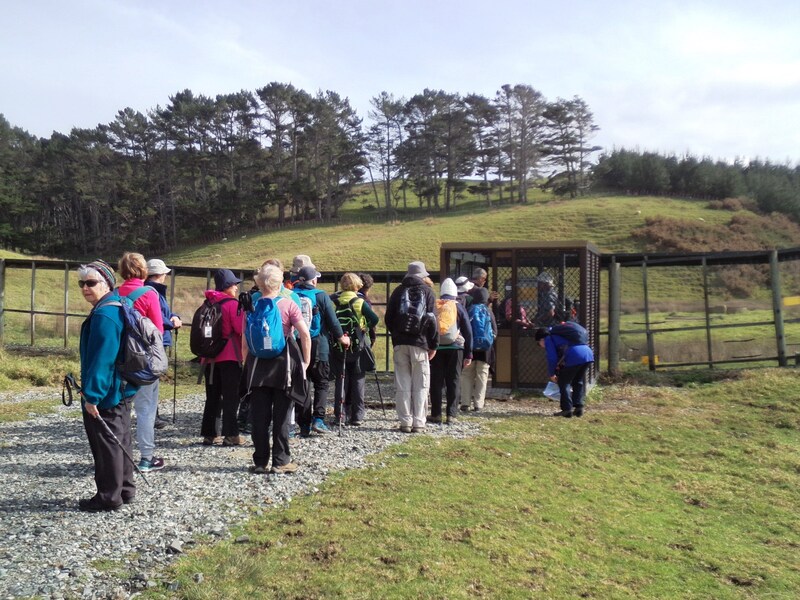 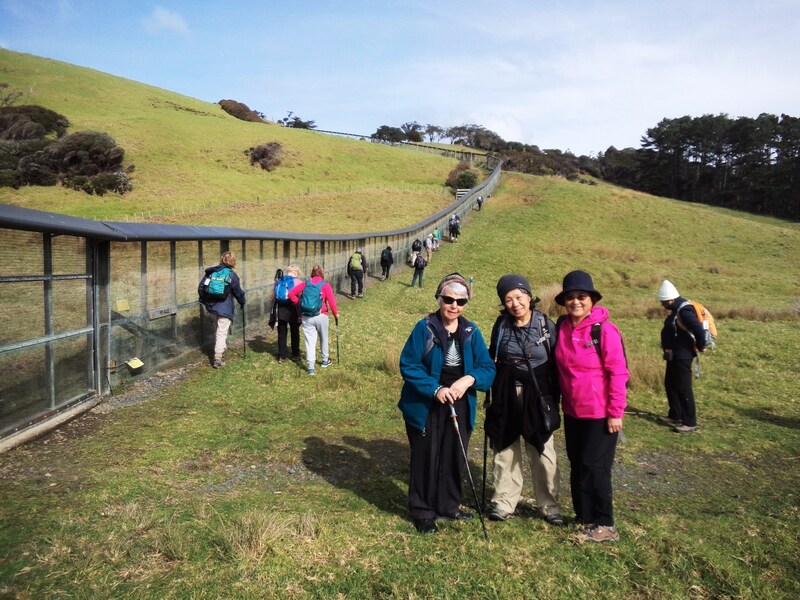 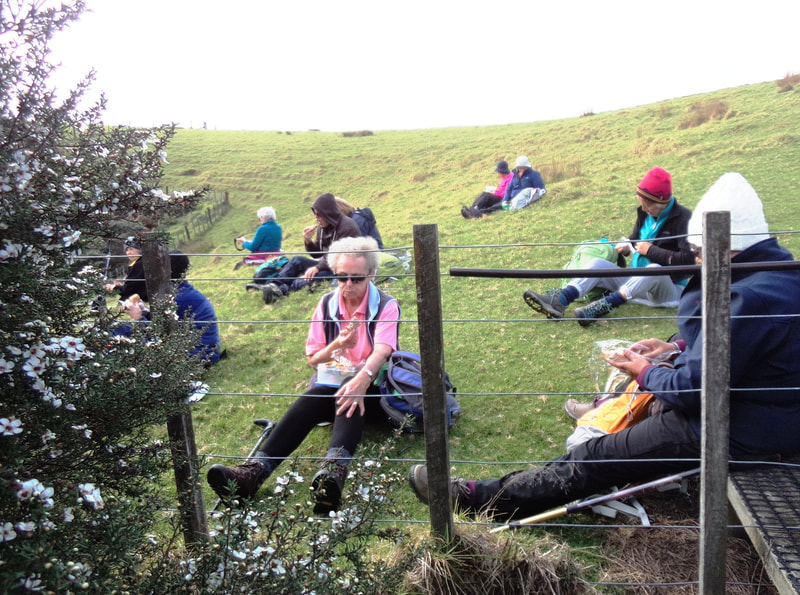 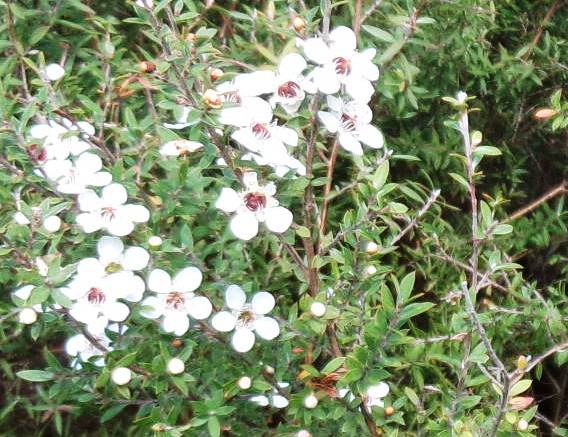 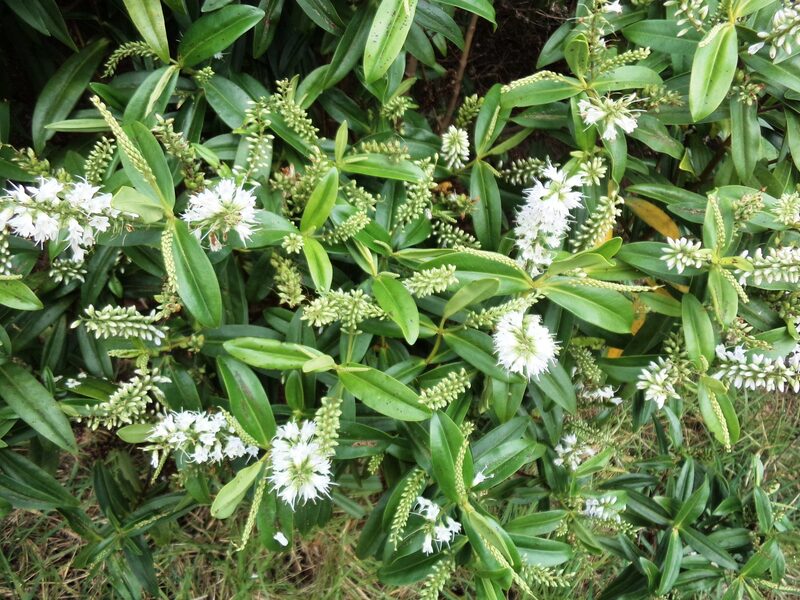 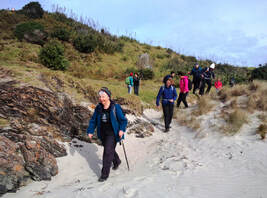 Heading to the bus
​From the beach it was a short walk back to the bus.

​​Well, we did know there was a good chance we’d be getting wet today, but that didn’t stop our hardy group of
twenty-one walkers.   So often we are lucky and the predicted rain never arrives.
​ 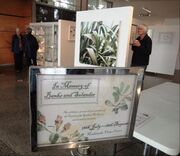 ​A wet day is always better with good coffee so we started with a quick stop at Café Miko at the Auckland Botanic Gardens.  By happy coincidence a botanical art and nature-inspired jewellery exhibition had just opened in the gallery there so we could browse a while.   The artwork was in memory of famous naturalists Joseph Banks and Daniel Solander who collected, described and identified many of our native plants during Cook’s Endeavour expedition of 1768, so we learnt a little about them at the same time.

Pahurehure Walkway in Papakura was our first walk.  The tide was going out and the stumps of old mangroves  (Avencenia marina) revealed themselves allowing us to see the scale of the mangrove clearance that had been done several years ago - a huge chopping out and helicopter removal operation to reclaim the inlet.

We heard about the ill-fated plans to install tidal gates at the southern motorway causeway entrance to the inlet.   There was a lot of support from the community for an artificial lake to be created for kayaking etc by closing and opening the gates several weekends a year, but opposition from iwi meant approval could not be gained.

​
​A group of volunteers, the Pahurehure Inlet Protection Society, work hard to maintain and further develop the area and the results of their efforts in planting, removing juvenile mangrove seedlings and pest control are impressive.   This is an easy, flat walk, popular with locals, but deserted today – even the wading birds and kingfisher usually in abundance were in hiding.   The red berries of the Chinese Wonder Tree (Idesia) were admired as we passed by.
Later we set off to do a loop walk through wetland reserves and onto the Wattle Downs Coastal Walkway.      We started off from Wattle Farm Reserve ponds, with the resident flock of geese watching us warily as we took note of the wattle trees  (Acacia) cloaked in yellow, a  wonderful winter splash of colour.
This is another easy, though longer, walk which is in two parts – north and south, which can be joined together by travelling on a few nearby streets.  It is a shared path, wide with an excellent surface,  and suitable for walking, cycling and even strollers.

With the waters of the Manukau Harbour on one side, and lovely homes and gardens on the other, plus playgrounds, picnic areas and a good beach, the pathway has several easy access and exit points from local streets.
​There was a definite “envy” moment as we passed a couple soaking in their patio hot tub as we plodded on in our wet weather gear.

No sign today of one resident who we spotted another time on the beach picking up the odd piece of rubbish,  with her pet parrot firmly attached to her shoulder!   Great to know some local people are taking pride in their area and looking after the environment.
Eventually we decided enough was enough, we would shorten the walk and call our trusty bus driver, Joe, to come and pick us up.   A hot shower back home felt so good, as did the satisfaction of a good walk in good company.

Thanks to Elane and Sharleen, our leaders, to Praemi for the botanical notes on mangroves and wattle, and to everyone for your cheerfulness and resilience! 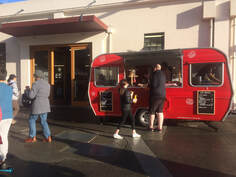 Food Truck - Market Entrance
​
​A lovely way to start a Sunday morning – coffee and pastries at the Hobsonville market.

​Catalina Bay is a very pretty inlet and the huge Catalina hangers have been sympathetically converted to a brewery, restaurants and a market and there are plenty of signboards giving information on what
happened here. 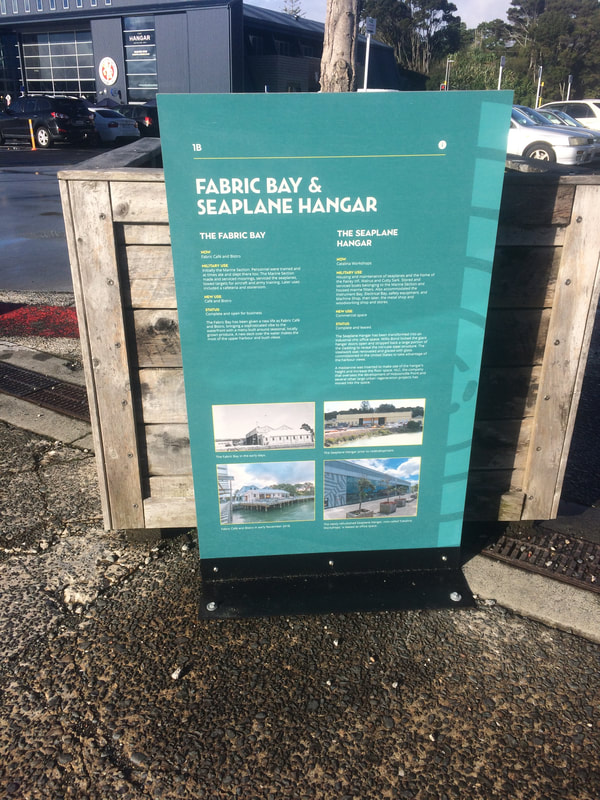 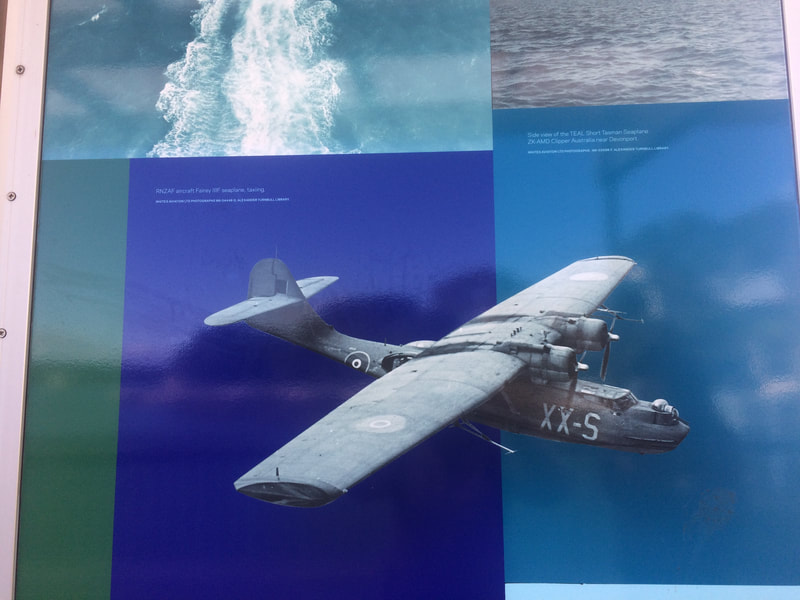 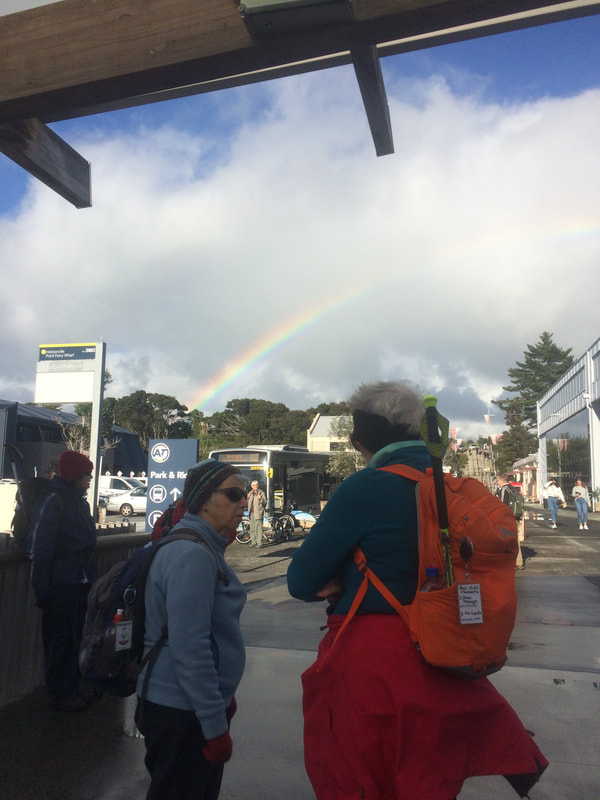 ​The Te Ara Manawa walkway (pathway amongst the mangroves) takes us round the coast past the officers’ quarters and Chichester House (built 1927).    Plenty of large native trees to admire including two huge Miro, the largest ever seen by members of the club. 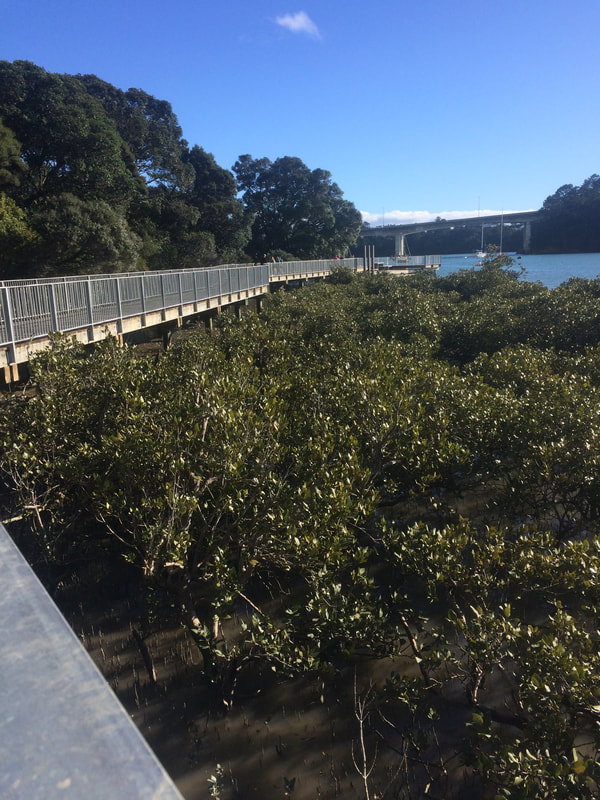 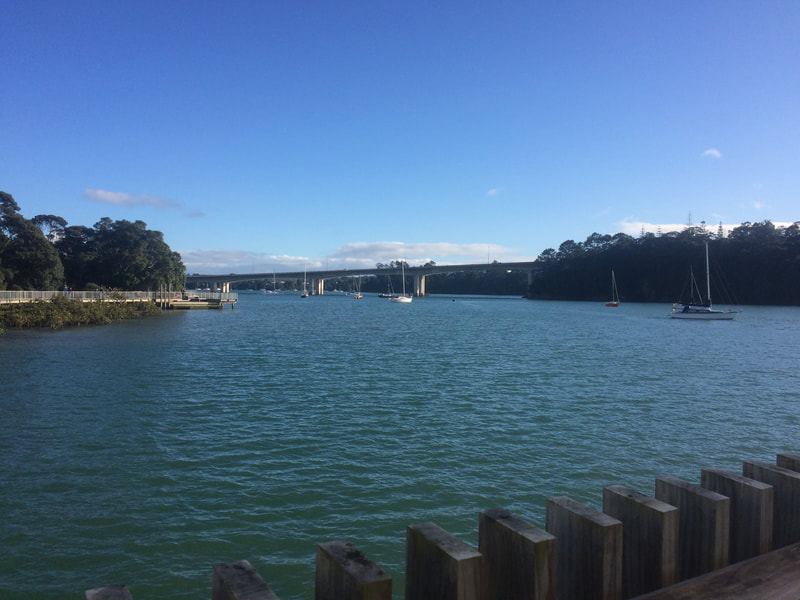 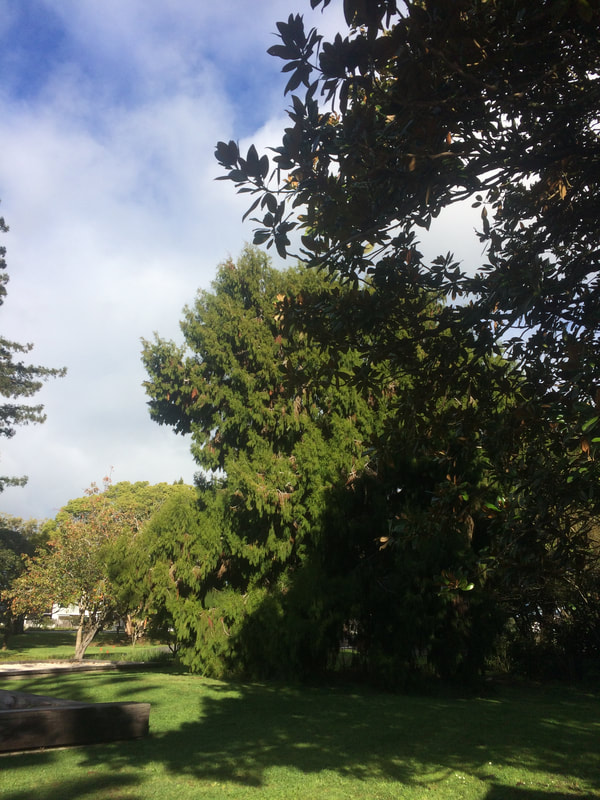 Thanks to leaders Marilyn and Anne for such a varied walk.
Text:      Anne
Photos:  Linda 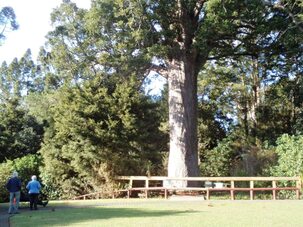 The McKinney kauri, named after Rev. McKinney, previous owner of the land.

Our merry band of walkers couldn’t help but remark to each other the well-known saying, “what a difference a day makes.”  Where the previous few days had brought cold wind and heavy showers, we fortunately had superb walking conditions.

Parry Kauri Park, five minutes south of Warkworth covers 8.5 hectares and provided a pleasant surprise to many of our group. The two gigantic 800 year old kauri on show at the park entrance attracted photographers keen to take advantage of being able to view the height of the tree against the background of an unblemished blue sky. As well as young and very old kauri, the park held many other native trees which were numbered from 1 – 14,  with information given about each tree. 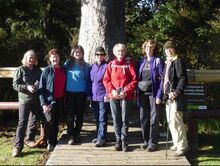 ​Several walkers commented that they didn’t know that such a large stand of kauri was tucked in here. Of course, there is nothing like a day out with the club to discover new parks and places. The mesh covered boardwalk with railings where thought needed, wound through the greenery and made for easy walking. For extra enjoyment a bird viewing platform had been provided, from which we could watch silvereyes feeding from the predator proof feeding station.
​ 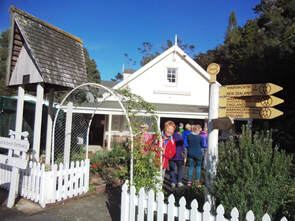 The corner with the display of the achievements of ardent botanist Lucy Moore was worth taking in. Those with time to explore the museum’s outer buildings were surprised by the old dunny complete with dummy occupant! 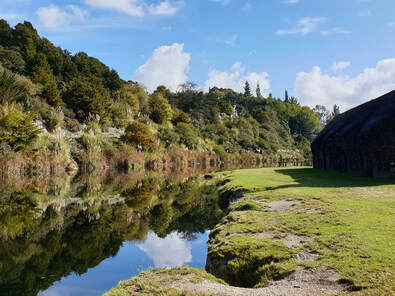 The former lime quarry, now a popular swimming hole
From the park a ten minute bus ride brought us to the  ruins of Wilson Cement Works, a relic of the days when it was the first manufacturer of Portland cement in the southern hemisphere, and now a significant industrial monument to those days.

On such a beautiful  day those keen to take photographs jumped into action again to capture the contrasts of the blue sky, grey ruins and lurking shadows. One of our leaders read out some brief background information and history of the ruins. This was added to by a knowledgeable, cheerful local resident who happened to turn up. The eerie atmosphere of the ruins, not surprisingly, has been known to give rumour to there being ghosts drifting around!

The Warkworth Riverside track started from the behind the ruins and on our walk much discussion arose, opinions sought and phones consulted as to the identification of some lesser known trees, the Indian Bean trees (we think) bringing forth the most comment.  Lunch time approached so we settled down in Lucy Moore Park in Warkworth, most people managing to be seated on a long circular bench which surrounded the base of an old oak tree.
​ 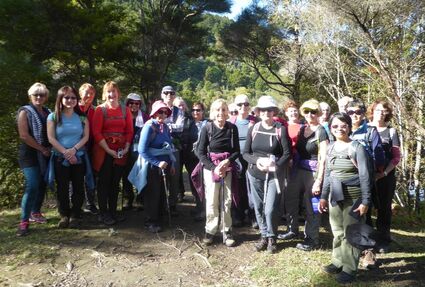 In Lucy Moore Park
After eating we walked into the township nearby, admiring the Jane Gifford moored at the wharf, which reminded us of our great Christmas trip on her a couple of years ago.

The metal plaques set in the brick walkway alongside the river showed the names and dates of craft, which in days gone by had also tied up at the wharf here.
​ 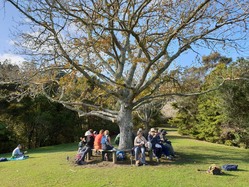 ​The easy path for the last hour of our walk, gave us the opportunity to watch shags diving, birds enjoying the shallows where the river spilt over rocks,  and patches of deep green moss. At the end of this walkway we quickly found the start of the 150th Anniversary Walk. This was a gentle path still following the river and presented us with picturesque views up and down stream. After walking for thirty minutes we turned around and made our way back to the township where our bus awaited us.