When the bus picked most of us up at our usual bus stops Joe, our driver, was greeted by members dressed in our “Sunday Best” instead of our usual tramping attire.  Some, who live out West, had already arrived by car when Joe drew up at Soljan’s Winery.  Still others, much valued former members of the club, were “chauffeur-driven” by a few members to show them our appreciation of their contributions to the club in the past.

On arrival we were greeted by President Derek and his Welcome Team:  Wendy (Treasurer) who had dealt with all bookings for the occasion and Margaret who used her calligraphic skills to write out beautiful name tags for us all.  The next stop was the drinks table, where a glass of beautiful sparkling Rosé, sparkling Sauvignon Blanc, sparkling water or fresh orange juice was available to each arrival.

Entering the restaurant, we were delighted to find tables decorated with vibrant potted cyclamen and festive helium-filled balloons, a tiny sprig of dried kauri at each place setting and the table mats created from laminated copies of documents from the club’s archives –  Molly and her helpers had been imaginative and enterprising!  Previously, Molly had sent out her “timetable” for the day to the committee: no military campaign could have been planned more precisely nor any wedding with so much sensitivity and included so much fun. 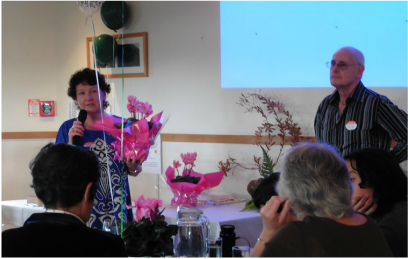 Molly thanking Derek for her present, given in recognition of all her hard work done in preparation for the day

Seating was not allocated so we sat where we pleased, knowing full well that we could and would find occasions to wander around and talk to anyone we had not seen in a while. At one side of the room was a table decorated with a large dry kauri sprig and a kiwi made of icing sugar, next to the big cake that Derek and  Gail had made and that Derek had decorated with various birds also made of icing sugar.  Leaf shaped cut-outs were left on the same table, so each person could write their name, with a comment and drawing if they so wished.

The proceedings were started by President Derek, who welcomed everyone and gave a short speech to thank all the members and past members who attended the event.  He also read a note from a member who described how their horizons were widened by ANHC: having the chance to learn about new places and plants, make new friends.  A few of the older members and former members then gave short speeches regaling the gathering with stories of their own or others’ exploits on club outings.  As MC, Janet thanked all the speakers and invited guests to go up to the buffet tables for the main course.
The lunch was delicious, with a smoked fish pie, thick slices of roast beef with a mustard sauce and other dressings, roast vegetables (parsnip, potatoes, baby beet) and a salad with aubergines, courgettes, pine nuts, cranberries and capers.  We had a short break in between main course and dessert, and were pleasantly entertained by a medley of songs from professional singer, Candice Crow.   Dessert consisted of fruit salad, apple crumble and Tiramisu with custard, cream, etc.  A self- service table with coffee and tea was also available. 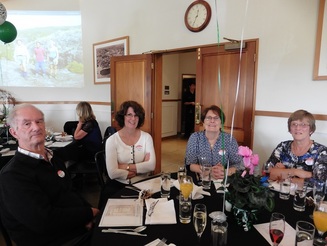 Ralph, Sharleen, Jo and Gail; Trallea (back to camera) watching the rolling display of photos from our trips
Conversation continued among guests for a while and then it was time for the group photographs:  many of us with digital cameras were keen to have a photograph of the whole group taken on our own camera, so one of the obliging waiters did duty as photographer too.  This is certainly going to be a treasured memento for each and every individual who attended that lunch.

Returning indoors, Derek invited three former ANHC members to cut the cake: the honours went to Beryl, Heather and Melva.  We then enjoyed the rich fruit cake that Derek and Gail themselves had made. 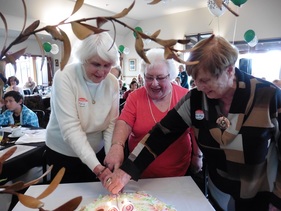 L to R: Melva, Beryl and Heather cutting the cake
A testament to Molly’s faultless planning and organisation and to Janet’s efficient handling of the event, the bus was loaded and ready to set off from the restaurant by 4:05 p.m.  Those who had travelled by car waved the bus off and made our way homeward, happy in the knowledge that we had all had a memorable day. 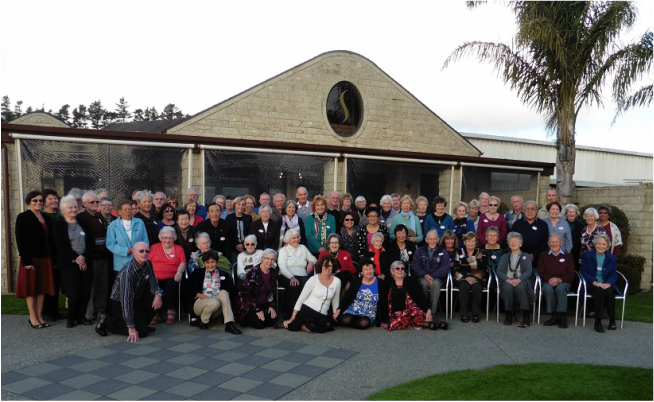