Twenty of us looked forward to a weekend packed with a variety of experiences and activities.  We started from Auckland later than usual, allowing the workday traffic to die down and only stopped in Wellsford for a short break, before heading to Matakohe. 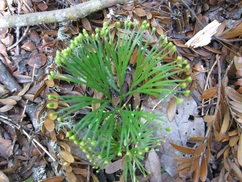 Kauri fern with the "comb" opened into a "fan."
Our first walk was in the delightful Bushman’s Reserve just short of the Matakohe Kauri Museum.  This is a small area left with a few large kauri, with an understorey of developing kohekohe.  On the recce a few weeks before we had seen masses of kauri fern (aka comb fern or fan fern) in superb condition: the “combs” open, showing the spores borne at the ends of the fronds.  Now there were some still left, but not in the best condition.  We took our time in this tiny bush area, finding unusual fungi and looking at the lovely young kohekohe plants with their shiny leaves.

​
After that it was lunch outside the Kauri Museum and then a quick look through the museum, greatly extended and with many more exhibits than in its early days.  The beautiful furniture in the first few rooms alone was worth a lingering look; the tale of how a mighty kauri is cut down and made into usable planks of wood is always fascinating.  Also, the exhibits showing different aspects of the kauri industry were informative and interesting.
​Here are two Kauri gumdiggers at work- 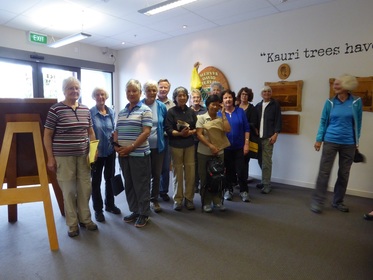 At the new entrance to the museum.


​We dragged ourselves away eventually, because we had a schedule to keep to, and arrived in Whangarei in good time to relax and enjoy Happy Hour before setting off to the RSA for dinner.  Here, some were inspired to dance to the live band that was playing some golden oldies!

This was our eagerly anticipated day at Whangarei Heads when we were going to do a “serious” walk!   The scenic coastal drive out to the Heads was relaxing but we knew that Mt Aubrey was ahead of us and waiting to be climbed!   All except six of us took on the challenge of this spectacular climb with its 360 degree panoramic views over Whangarei Harbour, Marsden Point oil refinery and on up the Pacific coastline.   Mt Aubrey is part of an ancient chain of volcanoes, its craggy peaks stabbing the skyline dramatically.      ​

It was a relief to reach the top and then descend to join part of the Reotahi Coastal Walkway, a gentle walk between Little Munro Bay and Reotahi Bay.  The Reotahi Marine Reserve is in this area and the walkway also passes through the Historic Places ruins of the ill-fated Reotahi Freezing Works.   Burned to the ground twice, in 1915 and again in 1921, only concrete foundations and some walls remain of what was once a thriving community.   Interestingly, all of the buildings which were not destroyed in the fire were relocated by barge to Whangarei, the most notable being the expansive single men’s accommodation building which was reinvented as a private hotel and still exists in Kamo.
The charming settlement of Pataua was in our sights for lunch by the water, followed by an easy walk across the estuary’s footbridge and on through the holiday homes to a beautiful surf beach with views out to the Poor Knights Islands. A very peaceful, unspoilt part of the country and home to many seabirds.
The road back passed by the iconic Parua Bay Tavern and the temptation was too great.   Good beer, good coffee, and a welcome short break on the water’s edge.
​ 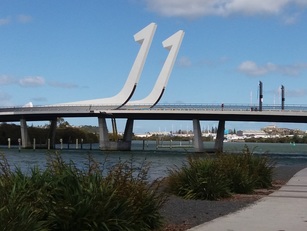 The graceful outline of the bascule bridge.
Finally, we had a surprise treat when we headed back towards the motel: red lights started flashing as we approached the bascule bridge and we watched the road ahead of us lifting up and a sailing boat with tall masts going across.

Back at our motel that evening, dinner was delivered in the form of gourmet pizzas and wedges accompanied by salads and fresh fruit and chocolate for dessert.   Smiles all round!
​

On day three we all keenly climbed into the bus for a trip out of Whangarei to the Abbey Caves. The three main caves in this limestone area are Organ, Middle and Ivy, which are set in the area known as the Abbey Caves reserve covering 18.7 hectares.  In order to view the caves, we had to scramble carefully into the   dark damp interiors and peer in where the land had dropped away. Fortunately no one was surprised by any cave wetas!  After the caves we took a leisurely walk through the area which is studded with limestone outcrops of fascinating size and shape. The attractive area holds  native bush with podocarp hardwood forest. Here we took time to admire the Puriri. Having climbed over many stiles on our walk we became most agile by the end of the morning. 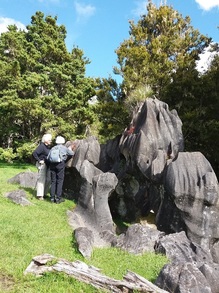 Looking at the fascinating rock shapes near Abbey Caves
Botanica Whangarei was our next stop. We strolled through the Marge Maddren Fernery ,the Snow Conservatory and the Cactus House. In the conservatory we  were delighted  to see orchids, palms bromeliads and a wonderful display of  colourful Amaryllis Hippeastrum.
​ 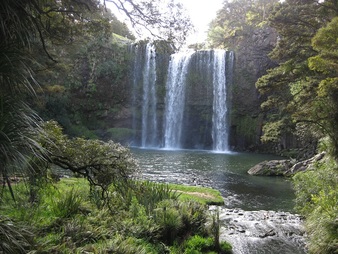 Impressive Whangarei Falls with its surrounding basalt columns.
By this time we were ready for the bus to take us to the  Whangarei Falls where we had our lunch and watched local boys jump from the trees into the river.

The Hatea River Walk  which leads away from the Falls  and follows the river ,was our walk for the afternoon. From this walk we were able to access the A.H. Reed Kauri Park with its 500 year old Kauri. There was an option after walking for an hour to return to our accommodation by bus or to continue walking  the track for another hour which would bring us  back to our base at  the Holiday Park.
​Most of the group continued the pleasant walk.

What a great day, seeing so much of interest and intrigue, leaving many of us wanting to find out more  later.

Before heading back to Auckland we visited the Whangarei Quarry Garden, a well established garden of many delights.  Met by a volunteer helper, we were shown around the garden after being enlightened about its history.  The bromeliad collection alone would have made it worth the visit for many of us; they grew in profusion in a very large area.  The landscaping too was impressive, natural features of the quarry are not just taken into account, they are made into features to delight the eye. It was hard to drag ourselves away from this wonderful project run entirely by volunteers and revived after some setbacks a few years ago.  The Puya, Indian Fig and Pseudopanax ferox were some rare plants we saw there.
We then spent some time at the Town Basin, where we could shop, sit and drink coffee and wander around to look at the many features of the area.  A few who had never been into the clock museum availed themselves of the opportunity to do so and were impressed by the sheer number and ecstatic about the variety of clocks they were shown.
​ 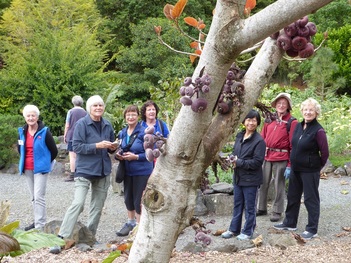 Another rare tree: the Indian Fig.
Finally it was time to head home and our friendly, efficient driver Peter used his local knowledge to avoid SH1 for much of the way and bring us back to Auckland in good time, before the traffic jams.
​

A huge "Thank You" to Molly for her excellent organisation and attention to detail!
​Thanks also to her helpers Linda, Praemi and Sharleen and all the others who helped in so many ways during this trip.

A special thanks to Fiona and Sharleen who supplied the text for the reports and to Cheryl, Sharleen and others for the images.