19 May - Te Atatu Peninsula and Henderson Heritage Walk
​But the stars of this track are the ngaio (Myoporum laetum) trees, many with well- developed crowns unhindered by other, larger, trees.  Karo (Pittosporum crassifolium), another coastal plant, is also abundant along here. 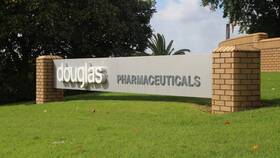 ​
​Opposite this, are the premises of the Douglas Pharmaceutical Company.  Set up by Sir Graeme Douglas, the company is a New Zealand success story, seldom heard.  Starting as a dispensing chemist, Sir Douglas developed a company (now in the hands of his elder son – with a current staff of 700), that manufactures and exports pharmaceutical products to over 40 countries.  The Douglas family are also recognised for the charities they support, especially Starship Hospital.
​​After lunch at Falls Park we headed for Mill Cottage to learn some local history from two ladies of the West Auckland Historical Society who came in especially on a Sunday to share their knowledge with us and to demonstrate how a trip dam works, using their very fine model by the cottage.  We also saw a special Hebe in the garden, Hebe bishopii, which only grows close to the Waikatere Ranges.
​Thanks to:  Praemi and Margaret for a varied and interesting day.
Text:             Praemi and Margaret
Photos:        Sue, Praemi and Sharleen 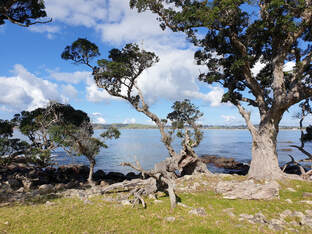 ​
​Forty three of us set off on a fine morning for a day of contrasts in the Leigh area. We appreciated the rural scenery and coastal views as we travelled north, and along the narrow winding road to Ti Point.

Our first walk started from Ti Point Wharf.  We proceeded on a gravel track and boardwalk, passing large old pohutukawa trees and huge boulders along the shoreline,  leading to a grassy area with views out towards Omaha Beach and the entrance to Whangateau Harbour, which made a pleasant area for morning tea.

​We continued on a narrower track along the coast past several sandy coves, with puriri, nikau, flax, and further open grassy areas with good views. One of these made a good resting point for B walkers, while the A walkers continued along the track for fine views out to Little Barrier Island, and a glimpse of Leigh Harbour. 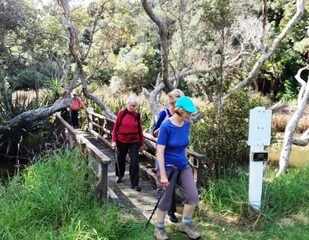 ​​Our next stop was Matheson Bay, where we enjoyed lunch on the reserve next to the beach.

Noted geologist Dr Hugh Grenfell  joined us here as our guest leader for the afternoon. First he led us on a short bush walk along the side of the Kohuroa Stream, and climbing up, passing pohutukawa, rimu, totara, kauri and kahikatea trees, listening to numerous bird calls, to a series of waterfalls. At the top of the main waterfall he pointed out the oldest rocks in the area. These are greywacke rocks, which were formed under water some 150 million years ago. He explained these rocks have been protected by the tree and bush canopy.
​We descended back to the beach and at the western end clambered across some of the rocks, which were exposed at low tide. Hugh pointed out weathered rocks here, including greywacke in the cliffs, which had become paler in colour through exposure, and other layers which had been deposited millions of years later. These later deposits were influenced by warmer water, and included limestone, shells and gravel. He pointed out fossils in shallow marine rock, formed about 20 million years ago, and told us stingray outlines and feeding hollows can be found in the rocks surrounding the small island.
Finally we climbed down to the beach below the cliffs at the eastern end of the Bay. Here Hugh pointed out Waitemata sandstone, black rocks, and stacks comprising these above the older greywacke.

Our thanks to Hugh for pointing out and interpreting the interesting rock formations and fossils which are exposed at low tide.

Thanks also to Viv and Elane for a most interesting day.
Text: Viv
Photos: Sue, Praemi and Sharleen 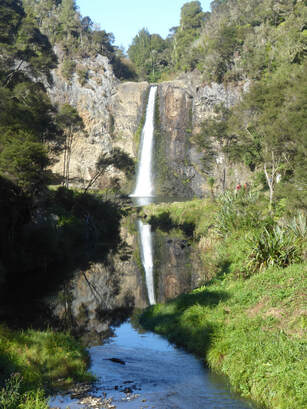 ​
It's not often you see a waterfall flowing in two directions at the same time!   This was the view from the bridge over the Wairoa River at Hunua Falls on Sunday.   The pool was crystal clear and it was one of those "Are my eyes deceiving me?" moments.

With much of the Waitakeres closed, walkers and trampers are turning in increasing numbers to the Hunua Ranges for their forest "fix".

Many of the high risk Hunua tracks have also been closed and great efforts are being made to protect the healthy kauri before it is too late.  There are excellent new manned hygiene stations, extensive "in your face" signage and a pop-up kauri dieback education caravan on site at the falls.   ​

​
​The Hunuas are remarkable in a number of ways.   The four reservoirs - Cosseys, Mangatawhiri, Wairoa and Mangatangi, supply 68% of Auckland's water and the forest contains a huge diversity of trees, plants, ferns and fungi.
Intensive pest control has resulted in an increase in the population of the endangered kokako and the rare Hochstetters frog also lives here. 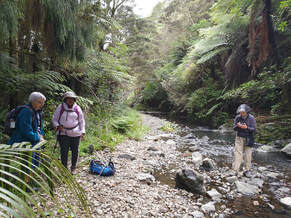 ​The tracks we chose took us on a three and a half hour loop - first the Massey track on a steady climb to its junction with the Wairoa-Cossey track and on to the Cosseys reservoir, before descending on the shady Cossey Gorge track.
Here was our rock-hopping encounter of the day, across Cossey Creek,  but very little water flowing so just a bit of fun.   Lovely bush - tawa, rimu, nikau, otara, taraire and lots of tanekaha, some rata with the odd bloom.
​
There was plenty of birdsong, including grey warblers, the heavy swoosh of kereru in flight and the dizzy dancing of fantails was never far away.    Not as many sightings of fungi as we had expected (there are 600 odd species of fungi in the ranges).  However always a thrill to spot some different fungi even if we have trouble identifying them.    Fern fans were not disappointed, the kidney ferns and filmy ferns were looking fresh and lovely.
​
The small group of B walkers tackled a good chunk of the Massey track then walked back down to  Cossey Creek for a leisurely lunch, beside the water and in the warm sun, before spending time on the Hunua Falls loop walk.   A good chance to see the falls from different vantage points, as well as getting close enough to feel the mist.

Bonus - a real fruit icecream truck at the carpark on our return!

Thanks to leaders Anne and Sharleen for a happy day.
Text: Sharleen
Photos: Praemi & Sharleen