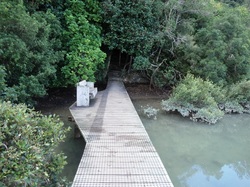 Well maintained boardwalks on the walkway
Today club members and visitors  enjoyed a morning walk along the Mangemangeroa Valley  Walkway which is east of Howick.  Mangemangeroa means the valley of the mangemange, a twisting climbing fern used by Maori for making raupo huts and eel traps.  The weather was wet and did not let us appreciate the wonderful estuary views that can be seen on a fine day.  However we enjoyed the coastal native bush of mangrove and saltbush vegetation and the forest trees –taraire, puriri, karaka, kohekohe and kowhai and a small stand of totara.

Birds were fairly quiet, maybe because of the rain. A fantail was seen and we heard the sound of a kereru flying overhead.

We started the walk at the end of Sandspit Rd, climbing down steps to Shelly Park Beach, walking along the walkway to the end of Hayley Lane and then doubling back to rejoin the bus at the Barn on Sommerville Rd. The tide was in and it was interesting to see how wide the Mangemangeroa Creek was when we first started, like a tidal estuary,  but narrowed down to a stream hidden by coastal bush at the Hayley’s Lane end.

We had lunch at Howick Beach during which we had a heavy downpour. This led to the historical walk around Howick Village being cancelled as we really needed fine weather for it. It will be rescheduled some time soon  and hopefully we will have a fine day.
​
Many thanks to leaders Joan and Anne for this lovely walk.

​Coast to Coast Walk with a Difference
​10 April 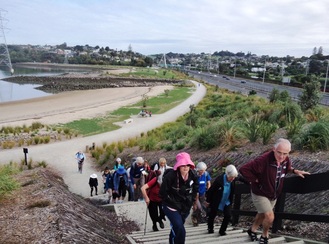 Going up to a bridge across the motorway beside Taumanu Park.
It was a lovely mild autumn day when 34 members and guests started our special Coast to Coast walk.  We first visited the newly planted Taumanu Park on the Manukau Harbour, which has not only been planted with a variety of native plants, but landscaped using very large and medium sized rocks scattered at the water’s edge to form a breakwater.  Every single rock was put in place manually: a feat worth remembering!
​
We then diverted (hugely!) from the usual Coast to Coast route today to look at some of the most unusual trees on the Auckland isthmus.  We saw them in private gardens and in public parks, natives and exotics, some thriving under the mild conditions prevalent in Auckland after being translocated from their native habitats, others woefully misshapen after pollarding.
​ 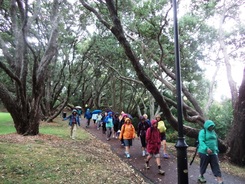 Walking down Pohutukawa Drive in the rain.
We noted some very successful street trees too:  the ginko(Ginko biloba), limes (Tilia sp.) and poplars (Populus sp.) along Princes Street were some examples.  They can withstand a high level of pollution, need little in the way of nutrients in the soil and do not have spreading roots that lift up pavements!  Of course our own pohutukawas seem to be able to grow anywhere, on anything!
There were the myrtles (no longer flowering prolifically as in summer) and the oaks (400 species worldwide) that gave us plenty to think about:  the myrtles comprising 5650 species include eucalyptus, Metrosideros spp., clove, guava, feijoa, jumbu, and innumerable flowering trees; the oaks consist of about 400 species, classified in different ways such as red/white/black or according to their leaf shapes.  Still others are evergreens, such as the Holm oak.
​There were unique trees like the tree aloe near One Tree Hill and the Ombu in Albert Park.
Finally, when we were getting too cold and wet (it had been raining since mid-morning) we decided to forego walking down to the waterfront and called for our trusty bus driver to pick us up.  Everyone agreed it was a worthwhile trip to have undertaken:  we seldom appreciate what is under our noses, and some of us will certainly look at the trees down our own streets with a different perspective.

​For a list of the trees we saw today, go to Tree Walk.

​Thanks to Sharleen and Praemi for a novel walk and good learning experience.
​