June 24 - Sculptureum at Matakana and Omaha 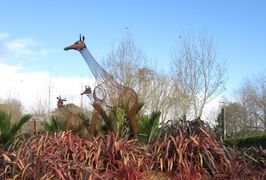 ​Not at all our usual kind of club trip, our visit to the fabulous Sculptureum gardens and galleries at Matakana was perhaps the highlight of our programme so far this year, with a big group of 47 enjoying the day.  Many of us are plotting and planning to make a return visit, there was so much to see and three hours wasn’t enough for some! 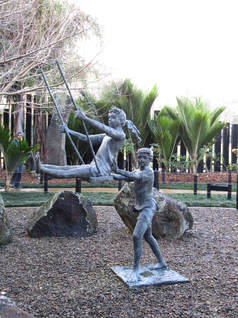 Girl on a Swing
​​
​Sculptureum (the name made up from “sculpture” and “museum”), designed and created by Auckland barrister Anthony Grant and ten years in creation, contains the owner’s private collection of more than 400 works sourced from all over the world and an amazingly mix of classical and whimsical works of art.

The three outdoor gardens, immaculate with palms, carpets of mondo grass and even a grove of young kauri have different themes.  So we saw vibrant and playful pieces in the Pink Snail Garden, beautiful and fun glass, metal and ceramic works in the Palm Garden and the Garden of Creative Diversity was just that – stunning works of art, inspirational quotes and a celebration of art and nature. 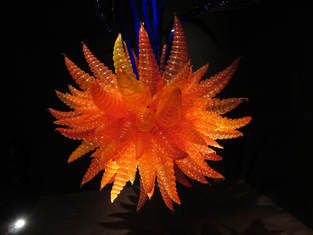 ​​Indoors the galleries contained a treasure trove of fascinating pieces – we were spoilt to have Anthony show us through here and share some of his stories.   The piece de resistance was the stunning glass “chandelier” by world famous artist Dale Chihuly.

​
​Some made time to enjoy a glass of local wine while being tantalised  by the wonderful aromas coming from the onsite Rothko Restaurant  (that’s for another day). 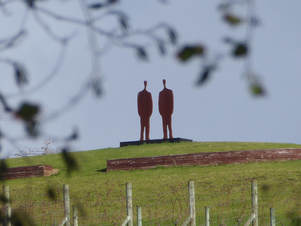 ​
​
​Thank you to Grace for her warm welcome and to Anthony for being so generous with his time chatting and showing us around.  ​
Then it was on to Omaha Beach where we spread ourselves about and ate lunch before embarking on a 90 minute walk.   Starting at the Surf Club we followed a well trodden path alongside the dune conservation area and masses of hardy, wiry looking meuhlenbeckia.

Along the way we passed several pou which were carved by local Ngati Manuhiri representing guardianship and local history -  sadly now missing their explanatory plaques, and admired some of the beachfront homes.
​

Mark Twain
​
Down onto the sand briefly then it was back up and onwards through a wetland area planted with natives.  Most of us took the chance to climb the 72 steps up to a lookout with views out over the spit, noting that this was the tsunami evacuation area!
Lastly a wander back through the streets to our waiting bus and the journey home.


​​On this grim looking day a small group of 17 walkers started along the western beach heading for Musick Point.  The cliffs along this stretch of coast are interesting, showing layers of silt and mudstone laid down successively to build up the cliffs.
This all happened over a period of about 18 million years ago and it is sad to reflect that due to the severe storms that Auckland had experienced in recent years, some very special features such as an anticline along these cliffs have been destroyed. 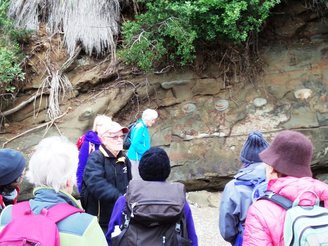 Round sandstone concretions in the cliff look like canon balls!

​One unusual feature still visible are the rounded concretions consisting of hardened Waitemata sandstone found embedded in the cliff and in the sandy beach.  They look like cannon balls left by some ancient army!
​A walk along the beach is always a good time to catch up on news with friends and we were at the base of the steps leading up to Musick Point before we knew it.  Though a short climb, the steps are steep and we were happy to stop for some morning tea soon after the climb.​ 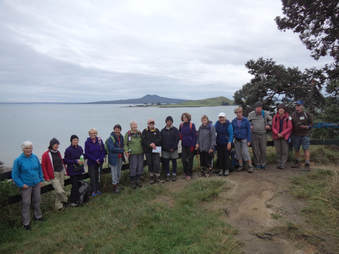 At the morning tea stop.
​
​In this area Des pointed out some unusual plants: the mountain holly (Olearia ilicifolia), tainui (Pomederis apetala) with its rough leaf surface distinguishing it from its close relative kumarahou and the coastal variety of five-finger (Pseudopnax lessonii) which has no petioles, with the leaf coming straight out from the stem.
Next, we were fortunate to be allowed into the Musick Memorial Radio Station by one of the radio enthusiasts, Anne, who told us the amazing story of Edwin Musick, the Pan Am pilot for whom the radio station has been named.  The building itself, in the shape of an aeroplane, is a memorial to the seventeen coast- watchers and five civilians killed in Kiribati by the Japanese army during WWII.  The radio enthusiasts’ website (musickpointradio.org) has a wealth of information about this building and the history associated with it.
Being a Natural History Club, we could not fail to notice the vast number of aloes planted all around the building, many still in flower and one with a flower head easily twice as tall as a person!
One last bit of “botanising” before walking back to the bus: Des showed us the difference between shining karamu (Coprosma lucida) and the ordinary karamu (C. robusta).  The former has green tipped stipules at the leaf axils, the latter has black tipped stipules.
After lunch Derek took us through Maclean Park, a lovely surprise!  Except for those who lived in the area, no one else knew that there was a bush area so close to Howick.  The devastation left by the recent heavy rains was evident but made no difference to our walk, on a well- made track. 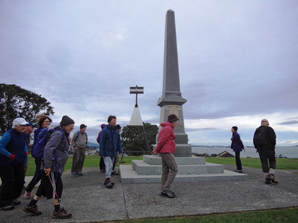 War Memorial at the stockade in Howick.
​Finally we saw the remains of the stockade at Howick Domain and Judson’s oak tree and heard about his exploits in WWI.  Judson’s decorations included the VC, DCM and many others.
A big thank you to Des and Derek for a most interesting and informative day!
Text: Praemi; Photos: Katherine and Sue. 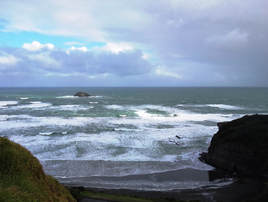 Amazing surf today
​On an overcast Sunday morning the bus took 21 intrepid walkers to a different location, changed from the programme because of the Waitakere kauri dieback rahui. With showers predicted and westerly winds expected to reach gusts of 27 knots (50 km/hr), the Muriwai parking area was strangely empty.

Undeterred we started off, shortly to shelter from a fierce rain squall, then off fighting our way westwards to reach calm in the bush of the short Maukatea Bay Track and climb to the start of the Quarry Track.

​​Rain during the week had not affected this all-weather ascent through beautiful nikau/pohutukawa coastal bush and the 88 intermittent steps were no problem. Then the easier gradient of the Edwin Mitchelson track soon found us up on the main road ready for a steady walk down Wairea Road. Here we were treated to spectacular views out over the Tasman Sea and Oaia Island, a nesting place of the gannets. The sight of the wind buffeted waves with their white-caps gave us a hint of what was to come - treat in store? 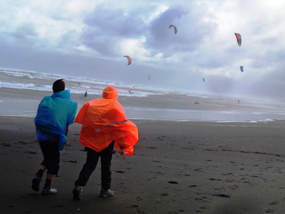 Windsurfers and walkers - we nearly took off ourselves!

After morning tea taken in the bus sheltering from another rain squall, we set off walking north along the main beach. Immediately we were treated to the  spectacle of the wind surfers. The strong on-shore wind was ideal making them speed along over the waves, frequently rising meters into the air lifted by the colourful sails of their kites.

Great numbers of ram’s horn shells were spread everywhere along the hard surf-pounded coastal sand. These flat spiral shells from the inside of squids consist of many chambers with tiny holes between each. By varying the amount of air and water in the chambers the squid is able to rise or descend in deep water. Blue Portuguese man-o-war with their long stinging tails had also been blown ashore. 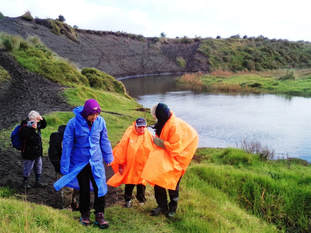 ​​Leaving the beach by the 4-wheel drive access road we walked along beside the picturesque Okiritoto Stream. After the recent rain there were many fast-flowing sections but still some quiet ponding areas too - open country now. Fortunately we found a sheltered area under pine trees to have lunch sitting on dry pine needles.
After lunch it was back to the ford and head for the bus. Now there was relief from the wind as bushes on the seaward side of the Coast Road track broke its force.   Then finally back to home and civilization early.  A refreshing day at the wild West Coast, all our cobwebs blown away, ready for another week in suburbia.
Many thanks to Marilyn (who found this walk for us) and John, our leaders today.
Thanks Sue for the photos and John for writing up this report. 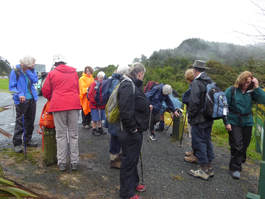 Shoe scrubbing and spraying before we enter the kauri area
If there was a theme for this walk, it could have been "mud and mushrooms".   The Beverley Price Track in the Pohuehue Scenic Reserve is a bit rugged at the best of times with a "tramping track grade, experienced walkers only" sign at its entrance.  It is however a good challenge and climbs through some lovely native bush bursting with interesting fungi at this time of year.

​Overnight and early morning heavy rain hadn't helped the muddy patches but as luck would have it, the rain cleared and a determined sun shone through as the day progressed.   Nobody got wet!! 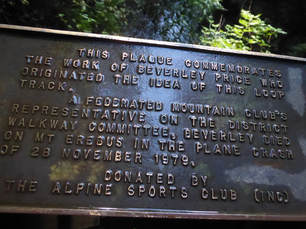 ​The track is named after Beverley Price, one of New Zealand's early trampers and mountaineers and a strong advocate for the establishment of walking tracks in areas of native bush.  Another area commemorating her is the Oakley Creek walkway in Auckland.    Sadly she was killed in the 1979 Mt Erebus plane crash in Antarctica.   A plaque in Beverley's honour can be seen on the viewing platform above the falls on the Waterfall Track which is also in this reserve. 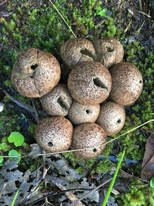 ​There were masses of colourful parataniwha gowing alongside the river and we noted several kauri growing strongly well back from the track - hopefully safe from trampers' feet and the threat of kauri dieback.  Rimu, taraire, puriri and nikau were also thriving and some of us were kept very busy spotting a big variety of fungi.
After detouring to the Waterfall Track, we retraced our steps and climbed steadily until we emerged onto a forestry road, before re-joining the track through pine forest and a carpet of pine needles underfoot.   We were very happy to see that DOC had reinstated missing signs and track marker posts since we did the recce a few weeks ago.    We had alerted them to the vandalism of some of the posts which made identifying where the track goes a bit tricky in places.   Thank you DOC!!
Only a few of us were keen to do the one hour  Puhoi Lookout track loop after lunch, but those who did enjoyed great views over the village.   The rest of us were content after the morning's efforts, to just wander around Puhoi taking in the historic church, museum and pub and then indulge in coffee and ice cream!

Thanks to those who braved the bad weather forecast and thanks to Vivien and Sharleen for organising and leading this walk.
Photos:  Catherine, Bev, Praemi
Text:  Sharleen
​