19 July - Exploring Parnell - Auckland's Oldest Suburb
A day of much variety – harbour views, historic buildings, an art exhibition, churches, beautiful homes, a native bush reserve, a palm and cycad reserve plus lunch at a French market.
​
We began the walk by heading down a very steep Takutai Street to join the Hobson Bay Walkway.  The tide was out and the clouds were low – a very grey start to our day. 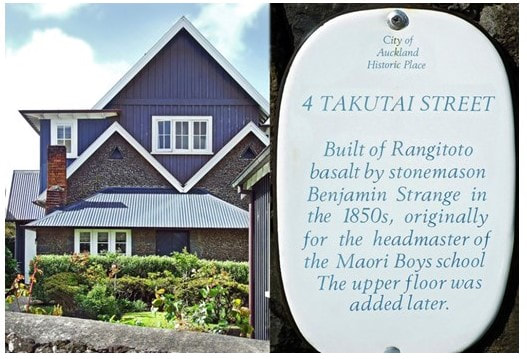 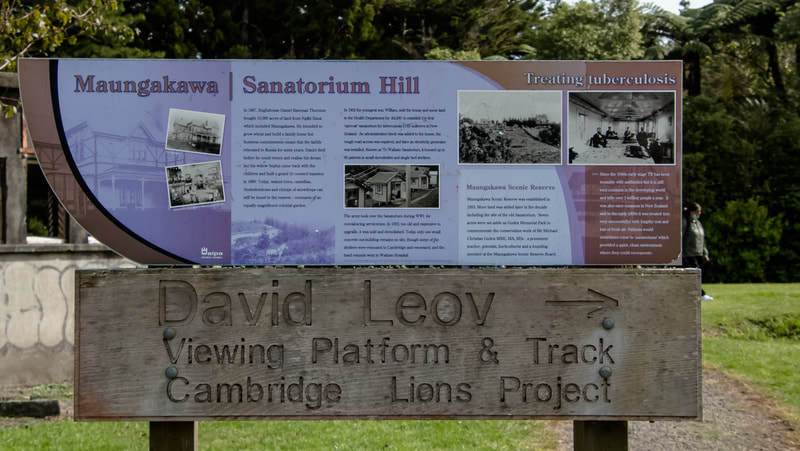 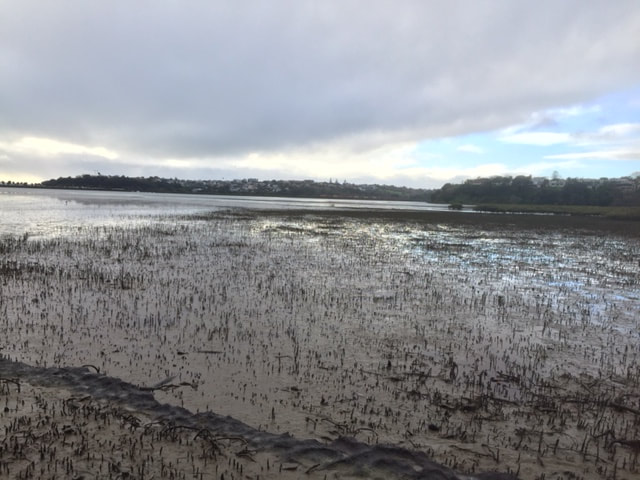 ​After stopping for morning tea at Newmarket Park we headed up Ayr Street – first stop, Ewelme Cottage.  We had only planned to take a peek at the garden, but we were fortunate to be met by one of the volunteers there and she regaled us with the history of both the house (home of Rev. Vicesimus Lush and family) and the garden, that included an old camellia that produced three different coloured flowers. 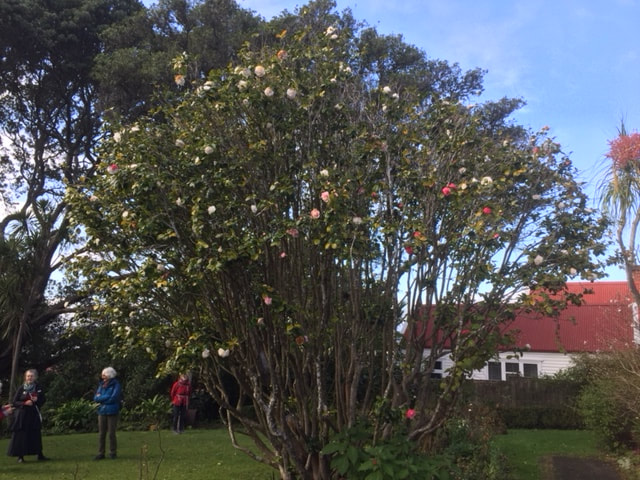 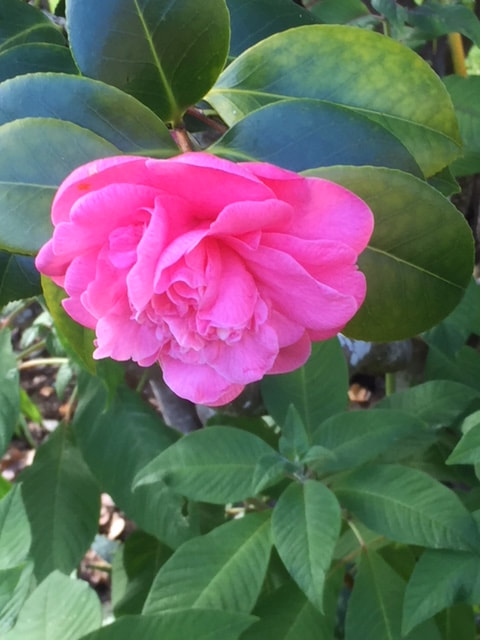 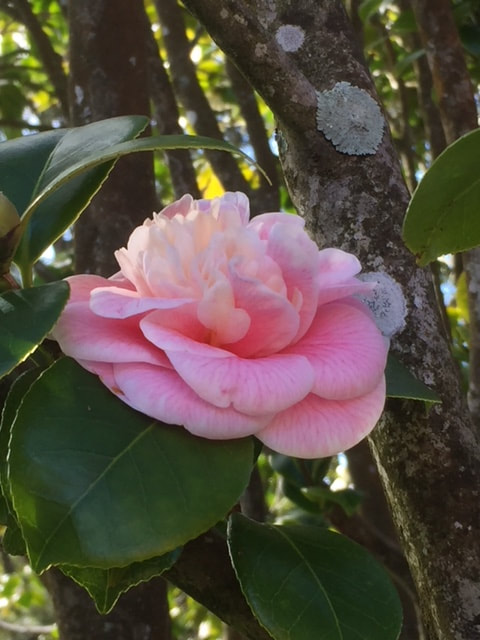 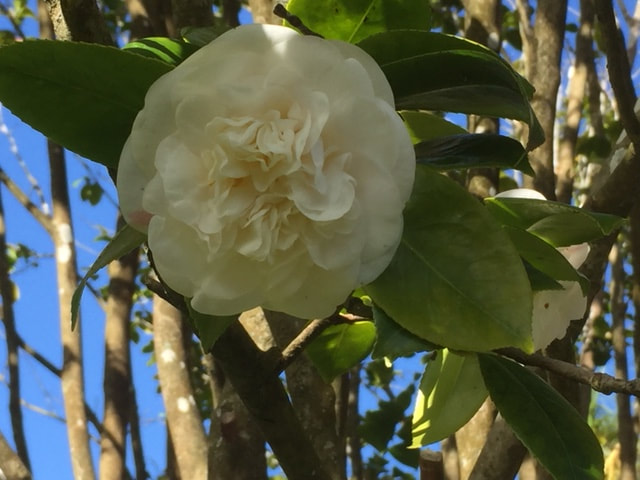 After the curator elaborated on the history of the House, we were able to view the current exhibitions – photographs of Auckland then and now, some of John Kinder’s original watercolours and the sculptural works of Oliver Stretton-Pow entitled “Make History”.
​As we reached the junction of Parnell Road and St Stephens Ave, we stopped and read the history board outside St Mary’s-in-Holy Trinity (built in 1886 and moved across the road in one piece in 1982), admired the stained glass windows at Holy Trinity Cathedral and inspected Terry Stringer’s Mountain Fountain that was moved from Aotea Square in October 2008. 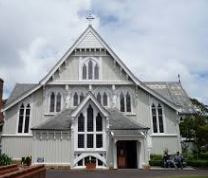 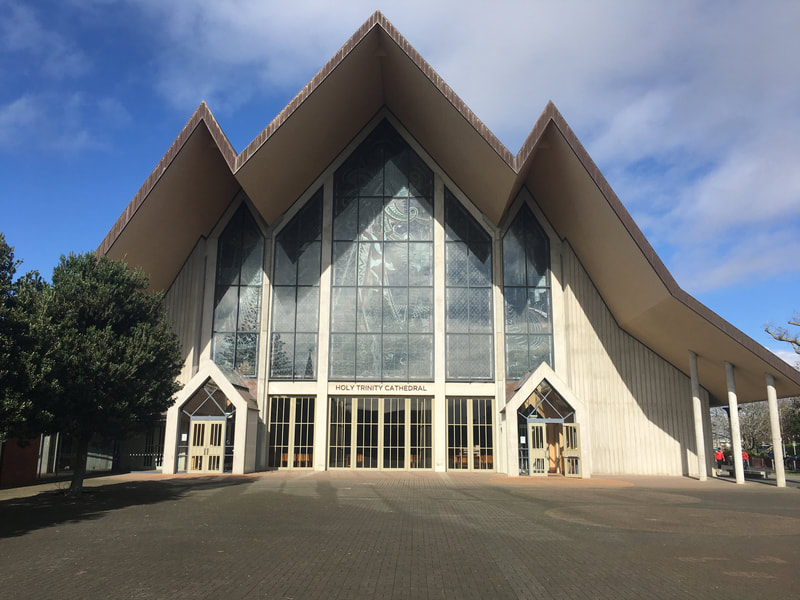 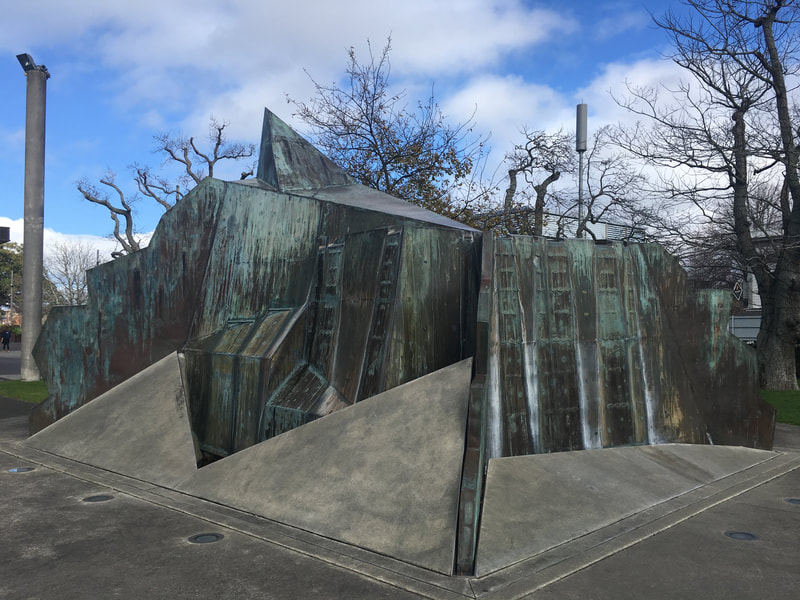 Then it was off down St George’s Bay Road to La Cigale Market for lunch – many yummy choices including ham on the bone bread rolls, salads, pastries and of course coffee. 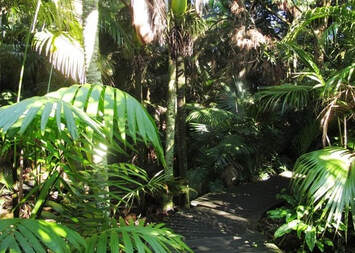 ​With our fuel tanks replenished, we ventured into Alberon Reserve.  George Cozens began planting palms here back in 1907 but the Council forced him to sell the 2 acre property and the area was put aside for a park.  25 years ago, the Palm & Cycad Society of New Zealand undertook more planting and now there are numerous mature specimens.

After we completed the boardwalk loop, admiring the truly amazing collection, we exited the reserve onto Gladstone Road. 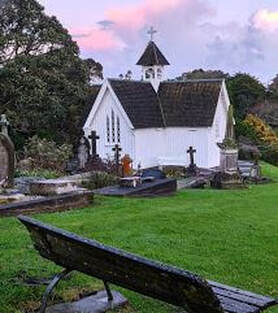 We took a short detour into the Parnell Rose Garden to admire a small stand of trees before heading down to Judges Bay Reserve.  We ​spent 10 minutes here soaking up the sun, gathering strength to make our way up the hill to St Stephen’s Chapel and Cemetery.

​The small historic chapel (built 1856) sits proudly on the hill surrounded by gravesites of many prominent early settlers, missionaries and church people.


​
​With a little time to spare, we made our way to Resolution Park to admire the 180 degree views, before heading back to the bus. ​
​Thank you to Jackie and Linda for organising the day.
Text:       Linda
Photos:  Katherine, Frankie
5 July - Mt Wellington and the Panmure Basin
​Today’s walk was a section of the Stonefields Heritage Trail and started at the Maungarei Wetlands, originally part of the old Winstone Quarry which began here in 1936.   Three natural springs have been made into three large ponds with lovely wetland planting and boardwalks.   There is a variety of birdlife including New Zealand’s only diving duck – New Zealand scaup (known as papango or black teal).
​The trail continues along the top of the quarry rockface and three pou installations, created and donated by Ngati Paoa, Ngai Taiki Tamaki and Ngati Te Ata, appear along the way.    A good view of the numerous houses that have been built at Stonefields can be had from this path (an eye opener if you haven’t been in the area for a while). 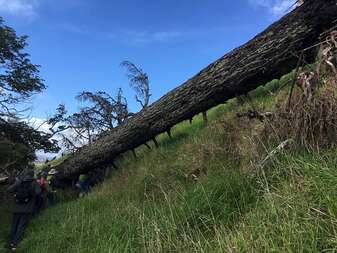 Spot the walkers - bottom left!
​
​Our walk continued around the base of Mount Wellington (Maungarei) along a narrow path through the grass, and over and under large fallen trees until we reached the Winifred Huggins woodland area.

Winifred founded the New Zealand Tree Society and planted natives and exotics around Auckland and the rest of the country to beautify wasteland areas.  The deciduous trees were difficult to identify in this particular area but there was a beautiful golden totara to be seen.
We then headed towards the smart new Panmure Bus and Train Station and through the road works at the Panmure roundabout (no doubt this section will look as smart as the bus station in a few months!) and into the Panmure Basin.
​Over the Jubilee Bridge and a left turn brought us to the nesting trees of the New Zealand pied shags (phalacrocorax carbo).  There didn’t seem to be so many there this time.  Perhaps they had found a more sheltered place on this cold and windy winter day.   The tide was out at the basin but this didn’t matter.   There was still plenty to see as we walked past the pond for the model boats, the mini train track, the yacht club and not to mention the private gardens. 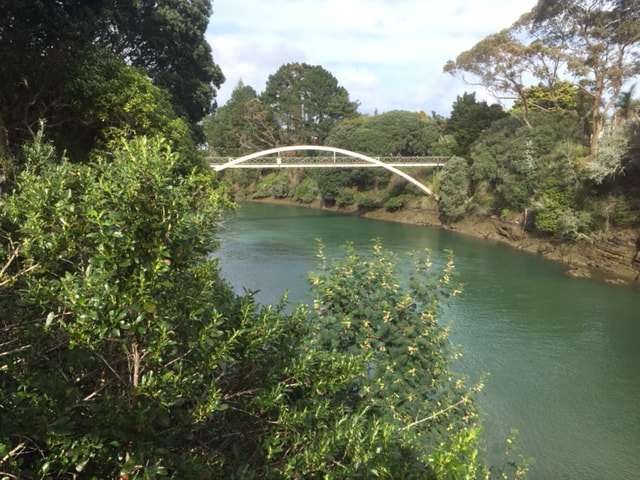 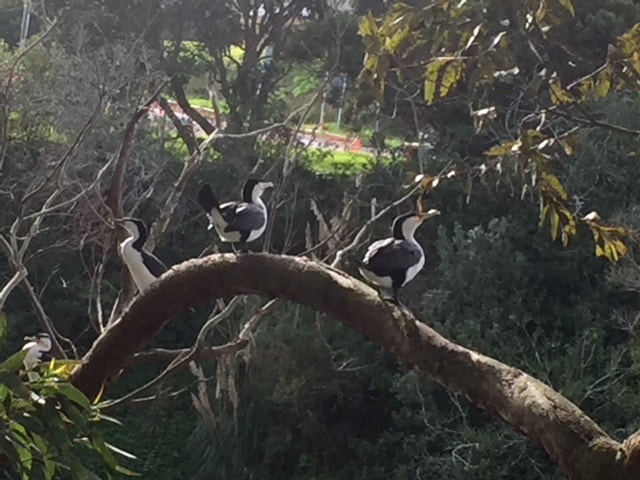 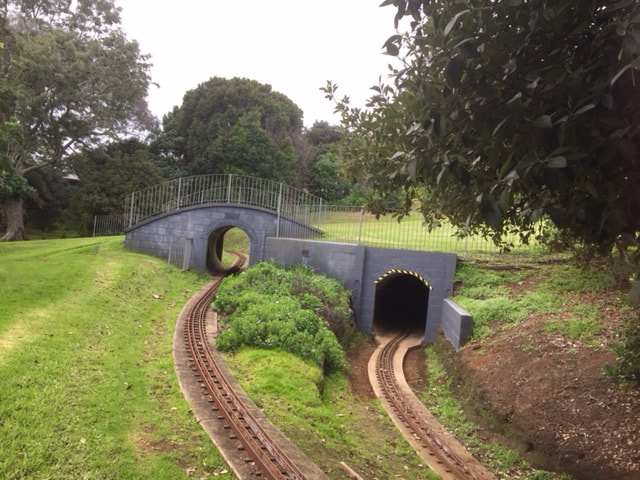 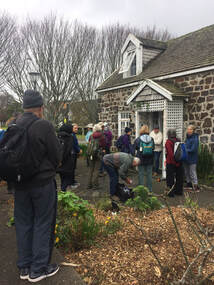 ​​We continued up to the end of the main street of Panmure where one of the original Fencible stone cottages has been erected for display.   Most of the Fencible cottages were wooden.   We had arranged a private viewing of the cottage for our members (in small groups because of its size!) and the custodian was very knowledgeable.


​​A great day out and what we couldn’t complete will keep for another day.


Special thanks to our leaders - Anne and Lawrie
Text:        Anne
​Photos:    Frankie, Katherine and Linda​

Our long-awaited return to climbing on a bus and heading off for a good walk at last!  It had been a long and strange fourteen weeks since we had done that.
So, off to Pukekohe to try out the “Five Summits Trail” developed by the Pukekohe Tramping Club, and opened late last year to celebrate the club’s 50th anniversary.    The trail links five volcanic hills and several reserves and parks in the area.

​We chose to do around half of the trail, starting at the railway station, heading up to Rooseville Park, on to Raven Rock and Cape Hill and finishing with Hickeys Reserve.   Taking the odd shortcut, it was around 10km.   The entire route is 21km.   It was a bonus to find old club friends, Derek and Gail, waiting to say hello as we set out walking. 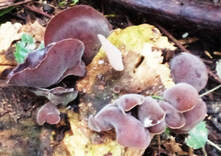 Tremella fungus on a tree trunk
​
​Walking into the lovely remnant forest at Rooseville Park, we could reconnect with some of our favourite trees, rimu, totara, giant puriri and nikau,  and also savor  the  wonderful smell of the damp forest floor.  Some interesting fungi too.

Part of the trail here passes close to the exposed volcanic layers of the crater tuff ring and we had a close look. 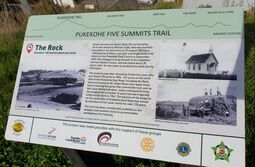 At The Rock summit
​​Our second summit was The Rock, or Raven Rock, a short, sharpish climb but well worth the views from the top.   A story read on the information board at the summit related the misfortune that befell two of the former landowners.  William Scott was killed by a Maori raiding party in 1863 and nearly 100 years later, Julian Raven was killed by a charging Jersey bull.  An unlucky hill perhaps? 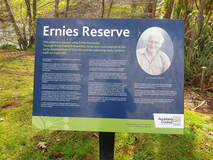 ​​A host of noisy ducks and other birdlife greeted us from the lake at Ernie’s Reserve where we noted what a great community man Ernest Alexander (Ernie) was.   Some of the walks and reserves we were enjoying today were partly due to this man’s time and effort.

​Cape Hill summit was reached next and from here, a different perspective of the crater.  We were now standing on more of the remnant of the tuff ring and could see just how big the crater was.
​
A short walk away we came to Hickeys  Reserve, its crystal clear stream a natural spring which had once been the site of a dam and also the source of Pukekohe’s first water supply.

​The vibrant bronze foliage of an ancient swamp cypress planted by Jeremiah Hickey over 100 years ago is a wonderful sight at this time of year, as are some of the other old trees here.

One of the great things about this trail is it can be as long or short as you like -  there are many interconnecting  public walkways that can be used to design a variety of walks.  Lots of possibilities!

Great little laminated pocket maps have been produced and are available at Pukekohe Library, the Council Customer Centre and at Kathmandu, and of course out-of-towner trail walkers can arrive and depart Pukekohe by train, using the station as their start and finish point.
Thank you Pukekohe Tramping Club!      And thanks also to Sharleen and Lawrie for organising the day.