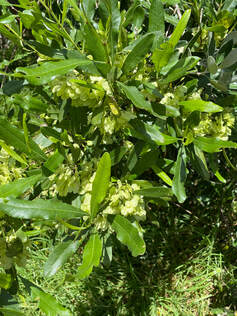 ​​Right at the start was an akeake, welcoming walkers into the bush track. Akeake is perhaps unique in the plant world, its flowers have no petals! On the bush track were puriri, kohekohe and tanekaha, all easily seen.  High up in the canopy was the rewarewa, which we located only when we found the toothed, elongated leaves on the ground.  The red matipo (mapou) was also found all along the track.
​​Keeping to the Perimeter Track, we went past the farm and alongside the swamp next to Te Puru creek.  There we found a great deal of raupo and Avicennia marina (the common mangrove plant in New Zealand). 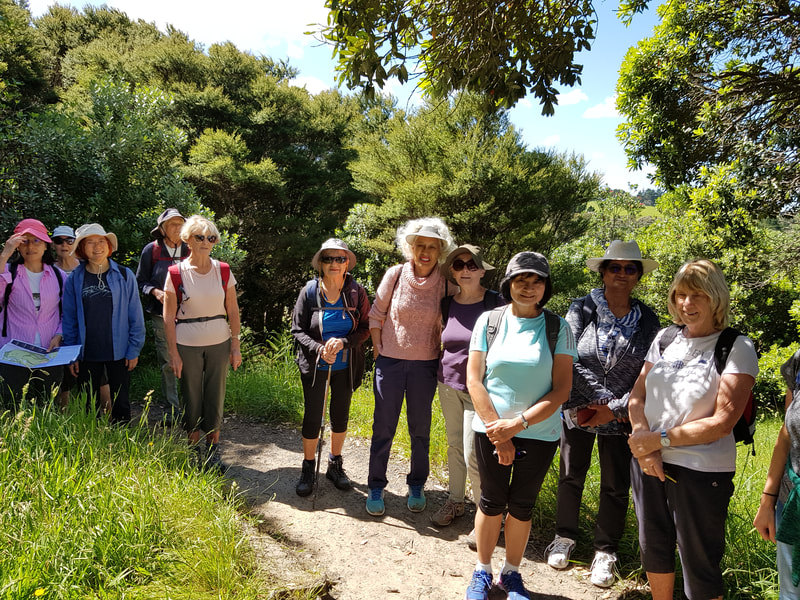 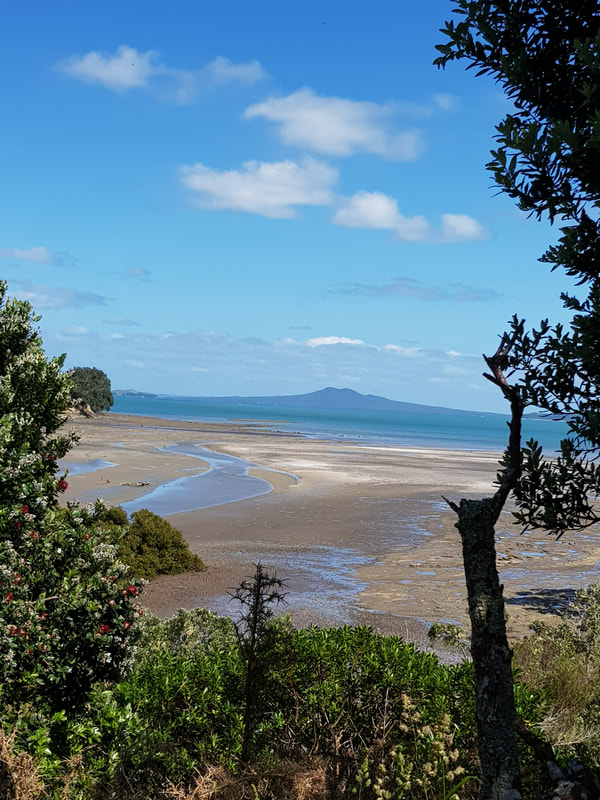 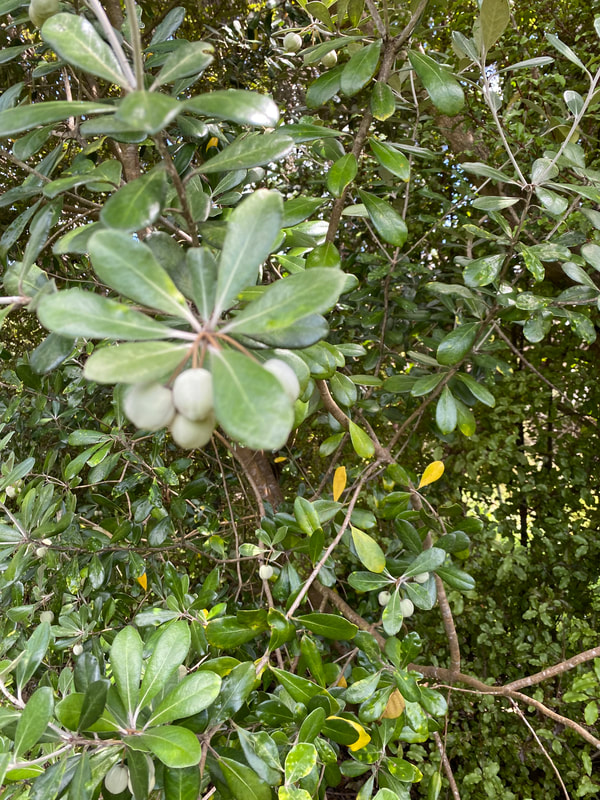 Eventually, leaving behind the bush, we reached the northern edge of the Regional Park, from where we had splendid views not only of Rangitoto, but saw the full length of Waiheke Island also. 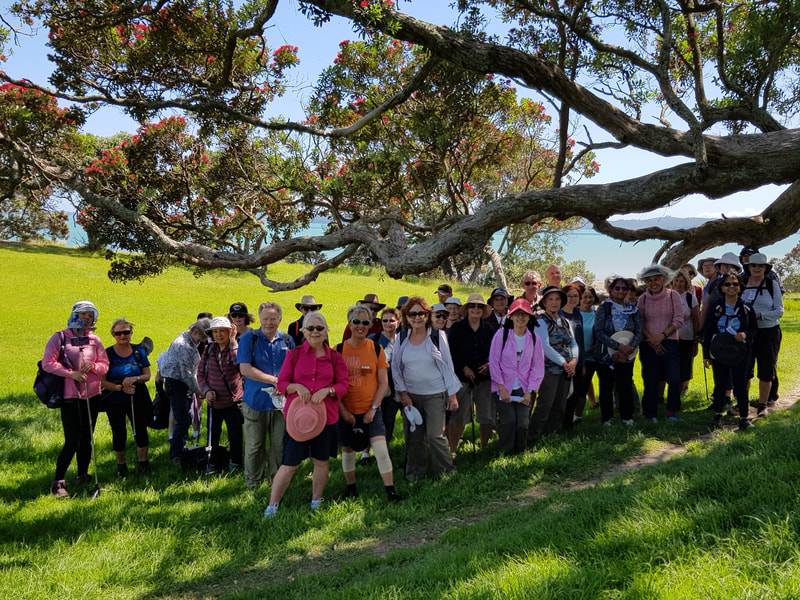 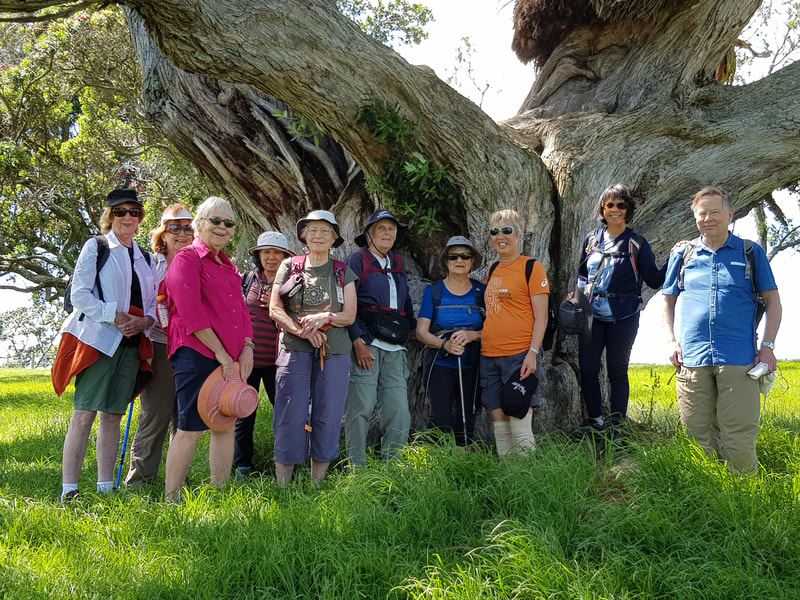 When we returned to our pre- booked picnic spot, we found that Linda, our President, had already cleaned the tables and barbecue area and laid out drinks and sweet treats for us.  We were ready for a drink in the shade of the flowering pohutukawa trees and had plenty of time to chat again while eating lunch.  This was a welcome experience after the solitude of using our own cars to meet for local walks nearly all year round! 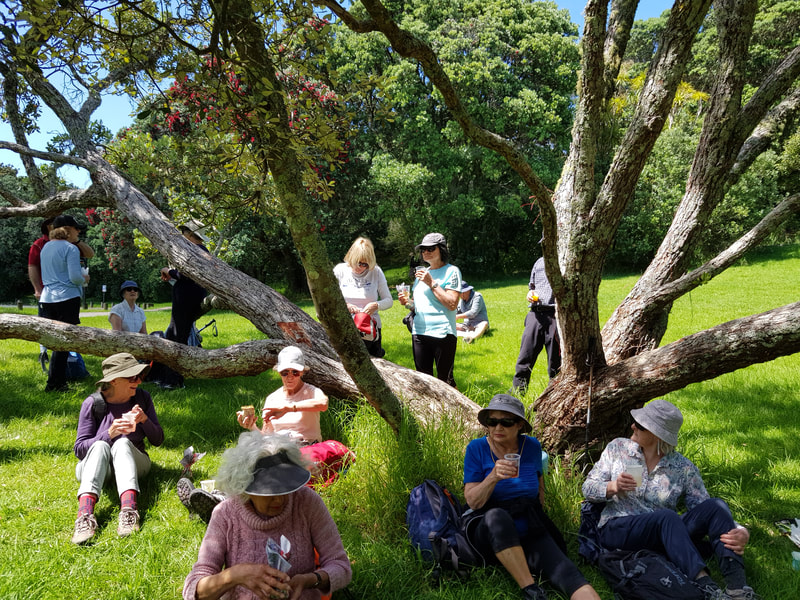 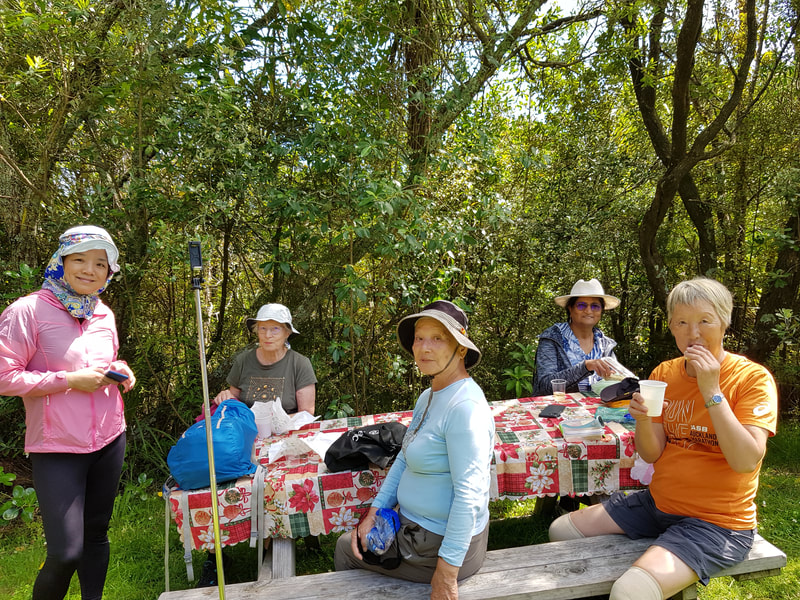 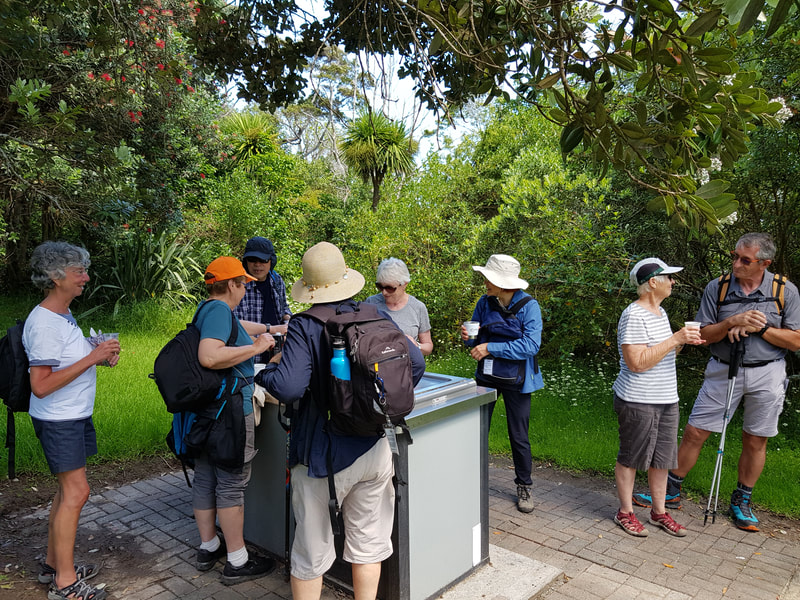 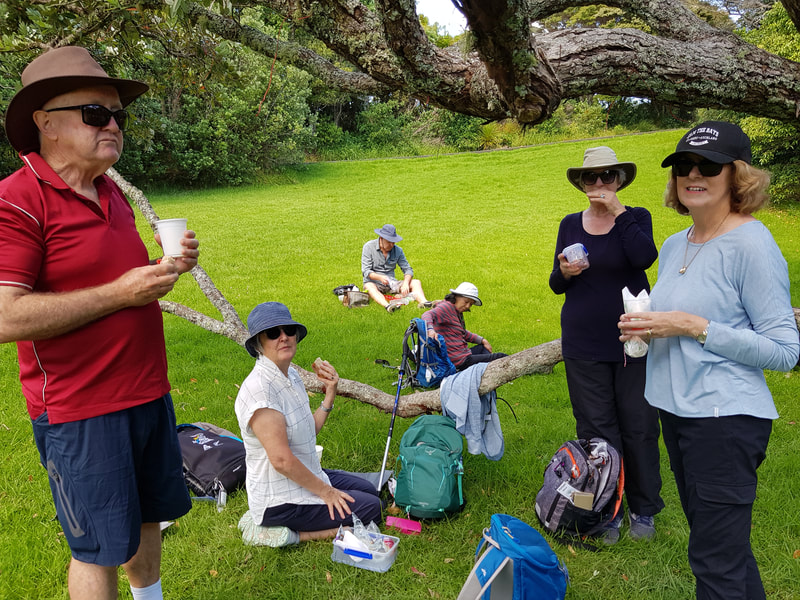 After a somewhat prolonged lunch break, we set off again, taking the coastal path to Maraetai which, after a while, turns into a delightful undulating path going through more native bush.  There was an opportunity then for a swim in the rather cool water, a paddle, a coffee or an ice cream. 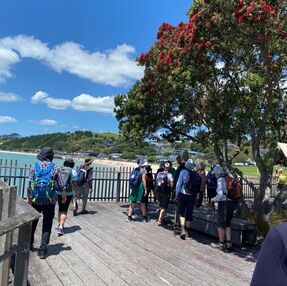 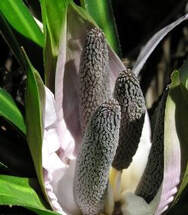 Today, 27 of us boarded the bus and made our way to Tawharanui, stopping briefly in Warkworth for coffee.  On arrival, we were stunned to find the whole carpark, including the bus parking area, was full of surfers, their vehicles, and their boards!
As we made our way to Sanctuary Hut in Anchor Bay, the bus headed off to find an alternative waiting place.  We took a few minutes to read about the park before making our way to the start of Fishermans Track. 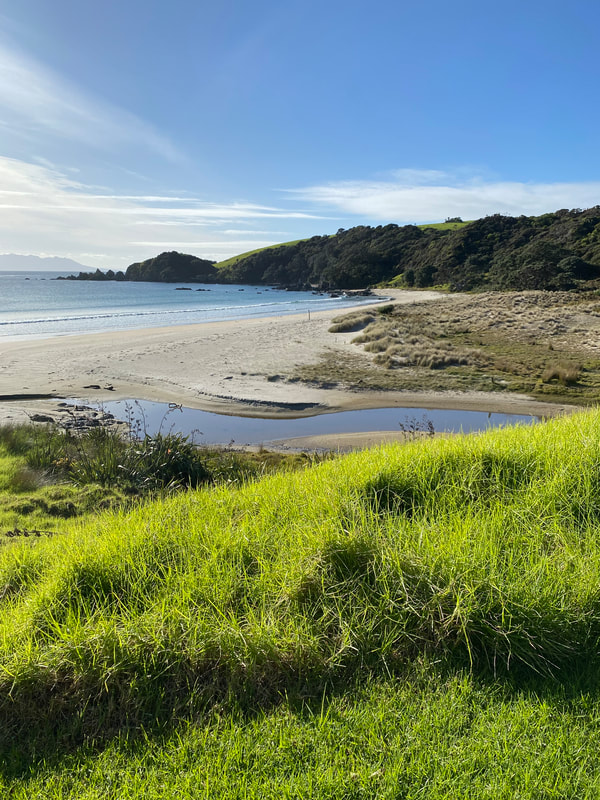 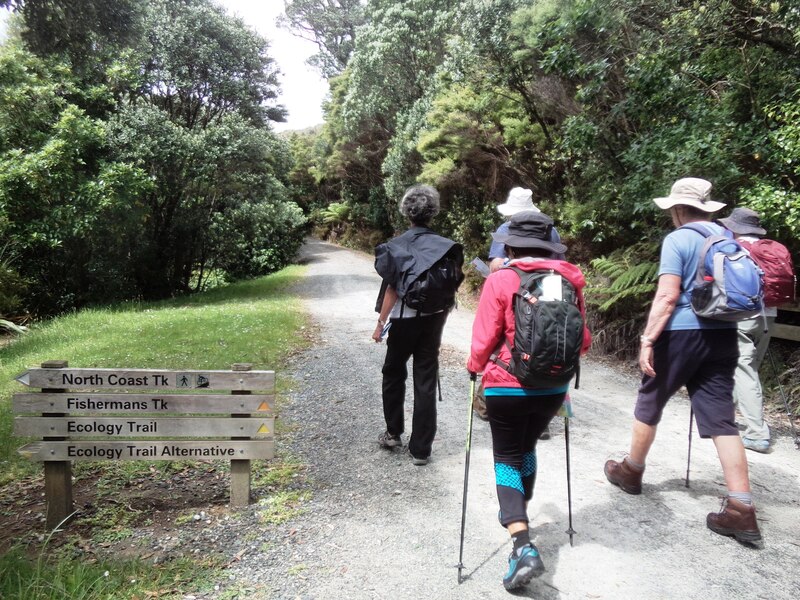 The track runs alongside a creek with a lush green canopy overhead and lots of nikau, other ferns, and palms.  There were also some cool puriri and plenty of birdsong.
​
On arrival at the cliff above Maori Bay, we were rewarded with the song of the saddleback, and eventually we spotted two of them close by.  The saddleback (or tieke) belongs to New Zealand’s unique wattlebird family, an ancient group which includes the endangered kokako and the extinct huia.  The saddleback’s current conservation status is – recovering. 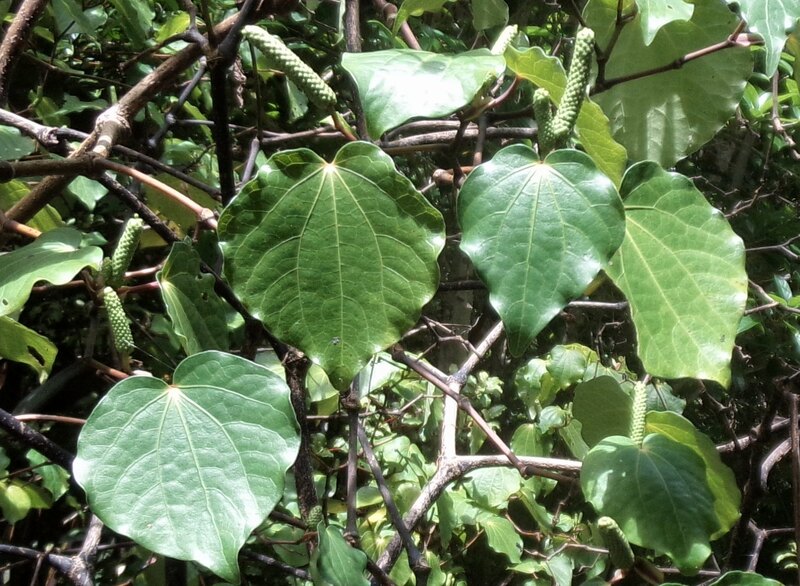 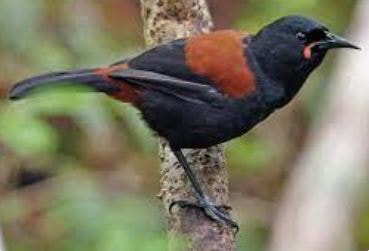 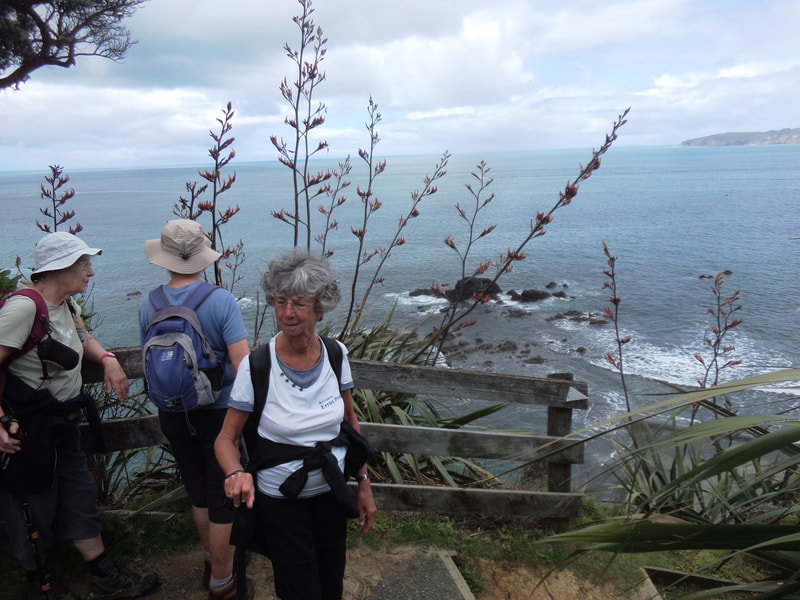 Most of the group opted to head down the 90 uneven and somewhat tricky steps to the foreshore.  In 1864, two Maori leaders, using whale boats, rescued Waikato Maori prisoners from Kawau Island and they ferried them across to Tokatu Peninsula (Maori Bay).

At this point we split into two groups.  21 headed off on the A trail and just 6 of us headed back on the B trail.
A Walkers
After leaving Maori Bay, we headed across pastureland on the South Coast Track until we reached the track that took us out to the Tokatu Point Lookout. 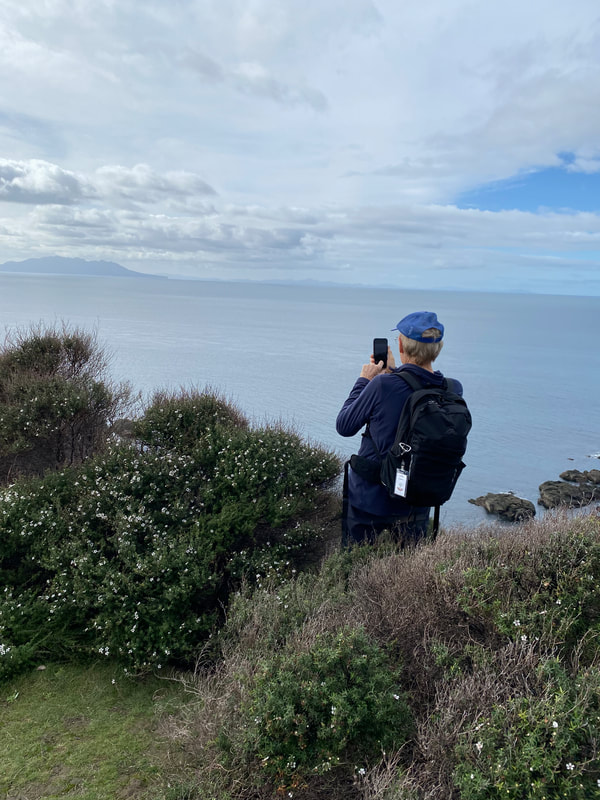 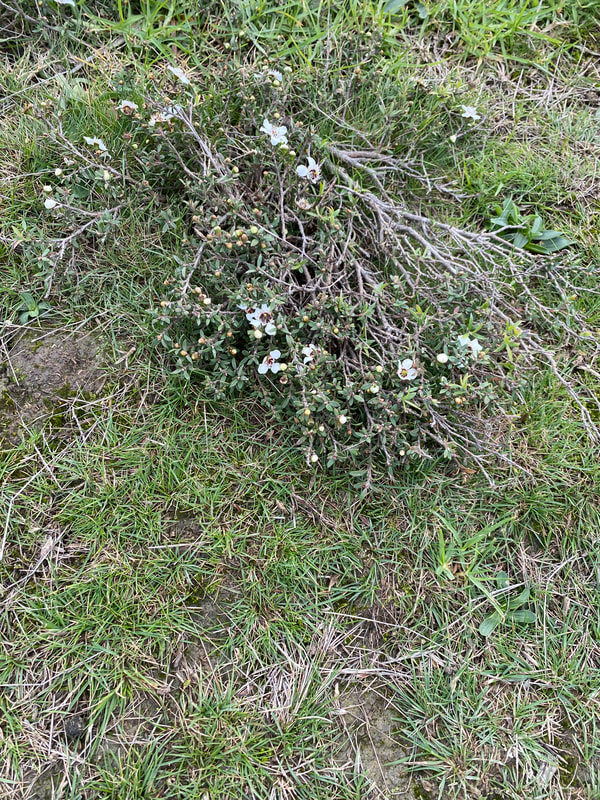 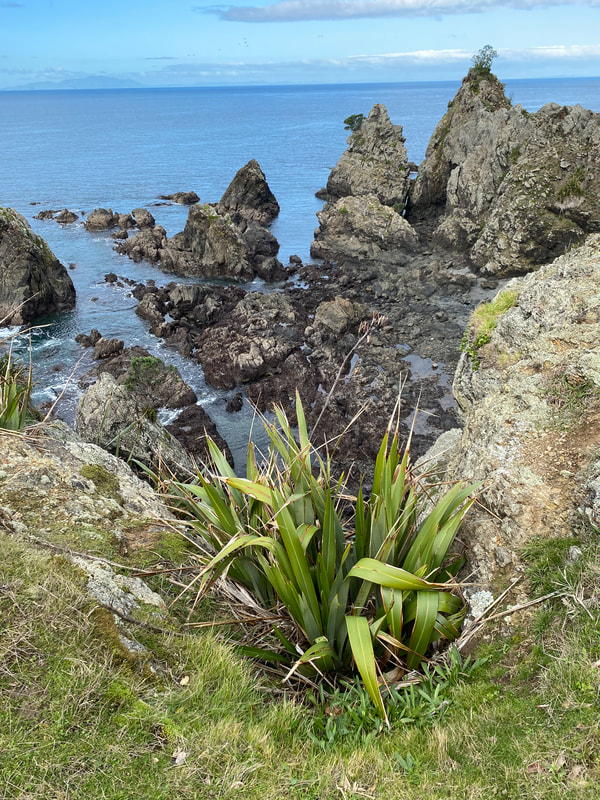 ​We made our way back to the junction with the North/South Coast Track and this time took the North Coast Track.  We were very exposed out in the pastureland (by now it was very hot), so when we came upon the sign leading into the Ecology Trail, we opted for shade and headed that way.  We were now walking downhill, in the opposite direction to the way the “B” walkers had come (their route detailed below). 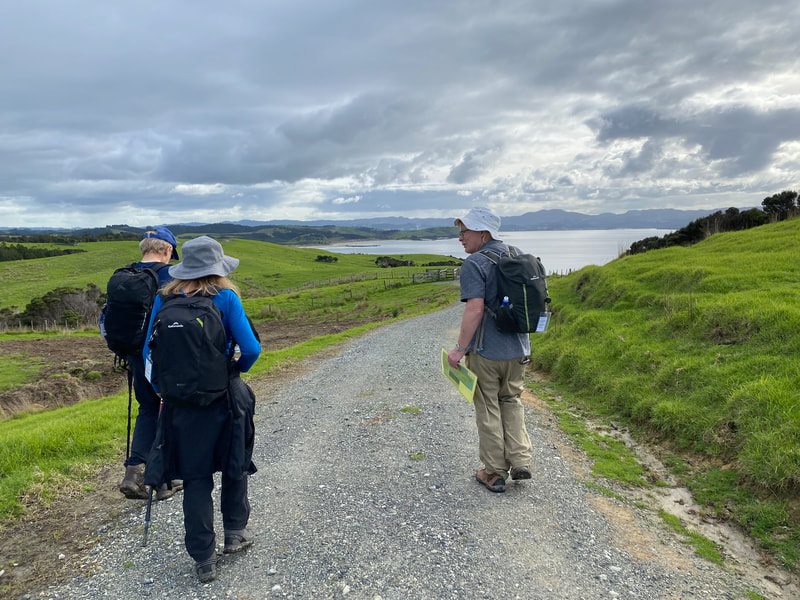 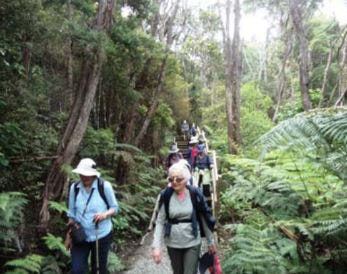 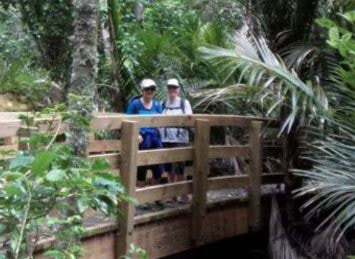 ​On reaching the junction with Fishermans Track, we turned right and made our way back to Anchor Bay where the “B” group were waiting for us.
B Walkers
After leaving Maori Bay, we headed back down Fishermans Track and at the junction for the Ecology Trail, we discovered a perfectly positioned, huge log – it was large enough for the six of us to sit on for our lunch stop! 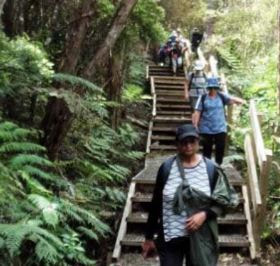 As we crossed the bridge over Waikokowai Stream, we entered an area full of lush broadleaf trees, puriri, karaka, tairie, pukatea and nikau palms.
​
We also discovered many, many flights of stairs!!  And, as we ascended, the trail took us into a forest of kauri, totara, rimu and tanekaha.

Eventually we came across the North Coast Track and turned left towards Anchor Bay.  We were now much more exposed to the elements, walking alongside rich green kikuyu grass with cows grazing in the distance and the odd pukekohe digging in the long grass for a snack. 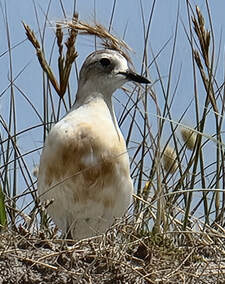 Dotterel
​​Arriving back at Anchor Bay with approximately an hour to spare before the “A’s” were due back, we set off along the beach – admiring the surfers, collecting shells, taking photos, watching dotterels and their young ones, and a highlight - we were fortunate to see a pair of oyster catchers with their two very young chicks!