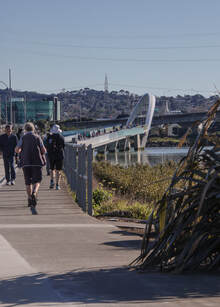 ​
​We were lucky enough to have a beautiful blue sky for our walk today.   Our first stop was at the walking and cycling bridge between Onehunga and Mangere, opened just the previous day.   A very fine- looking bridge wide enough for all the walkers, fisher people, bikes and dogs, it is a credit to its designers.

Oystercatchers and seagulls on the foreshore at Mangere.
​Then it was onto the Watercare Coastal Walkway.  We turned right from the gate to do the loop walk to the bird roost.    On the way we passed karo, ngaio, puriri, coprosma and kohekohe which we stopped to identify, using some basic characteristics of each.     At the bird roost there were lots of birds, including a black swan sitting on a nest made of sticks and grasses.   Hope she had lots of eggs under her.
​ 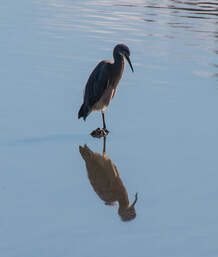 A heron waiting to find food.


​Then it was on past the treatment plant where we had a quick discussion about the lichen on the rocks we saw there.    Lichen is a combination of algae and fungi, living symbiotically.  The fungus anchors itself to the rock and absorbs whatever nutrients are available and the alga which contains chlorophyll manufactures food for both organisms. 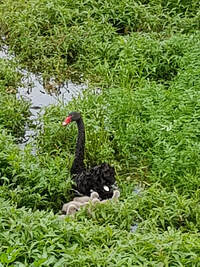 A mother with five cygnets.

​Puketutu Island was originally a volcanic cone which was quarried to build the airport runway and roads.    We walked up the causeway to the island and saw the release gates where the treated sewage is released into the Manukau Harbour.  Composition of the final effluent must meet Public Health, Local Environment and Auckland’s Coasts, Estuaries and Harbours Standards before being released.

Next to the holding pond we found a family of swans - with cygnets not yet ready to be shown to the outside world!

​Going further on, it is a pleasant walkway with beautiful views over the very calm water out to the Manukau Heads. 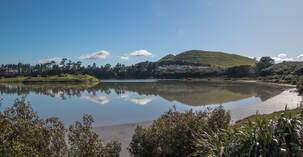 We had some superb view of the inlets- and who knew Mangere had more than one peak!
​Our final treat for the day was to view the petrified forest next to the airport.  To quote the information board we read before going down: “The expanse of the Manukau Harbour was once a vast lowland forest, with rivers running through it.  The fossilised tree stumps here are remnants of that forest.”
Leaders: Anne and Praemi, helped by Babeth and Philippe who did much local research.  A special thanks to Gilbert, who volunteered his bother's time and knowledge!
Photos: Barbara, Linda and Praemi

Today's leader, Jenny, opened our eyes to two “firsts” in New Lynn: the first (American-style) shopping mall in New Zealand and the very first concrete pillar in the world that was made using prestressed concrete.

We saw art works designed by New Zealand artists, from the "Rewarewa Bridge",  to murals surrounding the bus and train station.  There were also many items to remind us of New Lynn’s past as a centre for producing bricks for the building industry and pottery for both decorative and practical purposes.
We came across a whau tree (it has the lightest wood in the world) and the former clay pit where clay was dug out for the many potteries that thrived in New Lynn.
​
The latter has now been turned into a wetland where storm- water carrying pollutants (like heavy metals) flows from nearby roads into the ponds where sediments are trapped.  Cleaner water then flows into spillways constructed to take it back into a stream and eventually into the sea.
​After taking a look at the Crown Lynn Pottery display in the library, we went on to Olympic Park, where there were many sculptures relating to local activities (mainly fishing, but also pottery by Crown Lynn Potteries) and some beautiful ribbonwood and many kahikatea trees growing by the stream and, of course, prolifically growing, versatile flax.

A day with great variety!    Big thank you to first-time leader, Jenny, for a wonderful job.  We all learnt heaps.   Thanks also to co-leader Praemi for providing the web report, and Praemi, Linda & Sharleen for photos.

Our former president,  Derek, who grew up in Onehunga, offered to lead us on a walking tour of this historic area.  It was quite an eye-opener for some of us to find out what Onehunga had been like, over the past hundred years or more!
There were a number of old churches, parts of Onehunga Primary School and so many other public buildings, as well as private homes that Derek showed us, there are too many to name individually.
However, a few remarkable things we saw were unforgettable!  One was the house that had belonged to a sea captain who added a turret to his house (facing into the Manukau harbour) so that his wife could get his dinner ready when she saw his ship pulling into the harbour.  Another was the huge Norfolk Pine that used to be decorated with Christmas lights every year.
​We also saw the old Primary School buildings (now being restored) where girls and boys were taught separately, because the boys would learn skills like woodworking, while the girls would have been taught sewing and other domestic skills.  Children who went to the school were given an annual donation of £5 by a patroness, it seems for as long as she lived!

We also saw a mural of Elizabeth Yates, who became the first female to hold the post of Mayor anywhere in the world!  She was, of course, an advocate for the women’s suffrage movement.
A beautiful old building from 1886 that we came across used to be a gentlemen’s club, once known as “Scotlands.”  Before that it was the residence and surgery of a highly regarded doctor.  Caves at the end of the property, thought to go as far as One Tree Hill, were once used to grow mushrooms due to the perfect growing conditions, but are now closed, due to safety concerns.
​There were many sites where notable businesses had operated, most now gone, but two workers' cottages from 1870 had survived, well- maintained by successive owners.  We even saw a house that Derek’s grandfather had built on a large block of an acre.  But of course, the land has since been subdivided and two other homes built on either side of it now.  One business in the history books was the hardware store, the owner of which gained the nickname "Tin Tacks" from schoolchildren, who were often fed by this generous man.
​Within a stone’s throw of Onehunga Mall is the superb building which used to be the Onehunga Library, resplendent with Corinthian columns.  This was one of 18 public libraries in New Zealand built with money donated by the American philanthropist Andrew Carnegie. 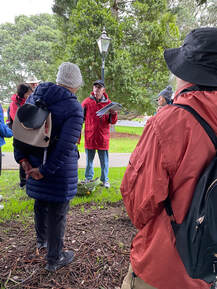 Derek in Jellicoe park. (Note the beautiful young kauri behind him!)
​
When we returned to Jellicoe Park, Derek told us about the "Fencibles" cottage nearby.  These were given to the soldiers brought out from England, named Fencibles, and used to help with building roads, etc. and often with peacekeeping too.

​The cottages were tiny, each one was also divided into two with a wall down the middle and there was only one room downstairs.  Upstairs there were bedrooms, reached by a very steep staircase; you had to come down backwards to be safe!

Later, fencibles were given a small piece of land on which to build their own home and a small amount of money.  Officer were given more land and more money!

All in all, it was a fascinating day in a part of Auckland that so few of us knew or had ever visited.

A big “Thank you” to Derek for putting this walk together, to Elane for the excellent notes she took along the way and to John for ensuring nobody got left behind.
Text: Praemi; Images: Linda and Praemi

​Our first time back on the bus in almost a year.   Three walks were planned for today and as it turned out they were all a bit different, although all in the Franklin area.    Our first walk was in Schlaepfer Park.   The land was donated by the late W. Schlaepher and H.N. Stevenson to the scouting fraternity and it consists of over 2 hectares, three quarters of which is in native bush.    Lovely old puriri and miro can be seen, with well- maintained paths leading down to quite a big waterfall.    We’ve had plenty of rain recently so that may account for the size of the waterfall.
We were a bit early to see the emergence of any puriri moths but Praemi gave us quite a bit of information on their life cycle.  The caterpillar digs a tunnel into the puriri trunk, digs further in a downward direction, then rests for a while before, as a grub, it uses the ridges across its body to wriggle up and out of the burrow. ​ 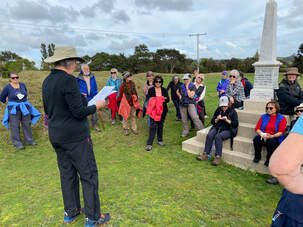 Philippa gave us the benefit of her historical knowledge.

​   Our second walk was at the amazing Alexandra Redoubt       (redoubt  comes from the Latin reducere meaning to withdraw) in       Tuakau.  This is one of the best preserved and most original of   the   Waikato redoubts built by the British forces during the New   Zealand   Land Wars.    At one stage there were 150 troops   stationed there, living in tents.   A monument and obelisk has been   erected to  commemorate those who served there, plus there are a   small number of gravestones from the late nineteenth and   twentieth centuries.
A mountain cabbage tree can be seen from the viewing platform too.   This is a very short, stout cabbage tree with wide leaves, quite different to the common species.
​The walk here is through lovely bush circling the Redoubt and high above the Waikato River on its way out to sea at Port Waikato.    This is quite a different view of the Waikato than the one seen driving along SH1.    Again the track is well formed and we had towering rimu and totara alongside the path.     There was plenty of fungi to spot and we even saw some basket fungi which some of our members hadn’t seen before.

​​Our third walk was Mt William off SH22.     This walk starts off through farmland and then into bush that has lots of nikau palms at the start and their berries are very popular with kereru.   Again the track is very well formed and although we couldn’t make it up to the top because of uprooted trees it was another lovely walk with plenty of native trees and shrubs worth seeing. 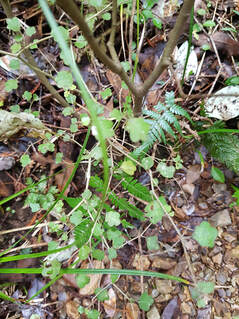 ​          For some the highlight may have been spotting kaikomako, a tree       that was once in the Guinness Book of Records as the rarest tree in the     world.   It wasn’t, of course: they just could not propagate it, as kaikomako   is monoecious and it takes two trees (male and female) to set seeds!   It is also called   ‘bellbird tree’ because bellbirds love to eat the fruit from it.  The specimen we saw was a   young plant with tangled stems; as the tree grows older, the branches become thicker and stiff and an erect trunk is formed.

The wood of the mature kaikomako is very hard and was once used for   making the handles for hand- held tools.  It can also be used for making   fire: due to its hardness, it can be rubbed against a softer wood and dead   branches make good kindling.

​
​We returned to Auckland a happy group, because even the weather had played ball and defied all the weather- forecasters' gloomy predictions.

​Thank you to Anne, Praemi, Philippa and John for organising an enjoyable outing for us on our first trip back on the bus!
​Credit for the above text goes to Anne, and for photographs to Linda, Robyn and Praemi.