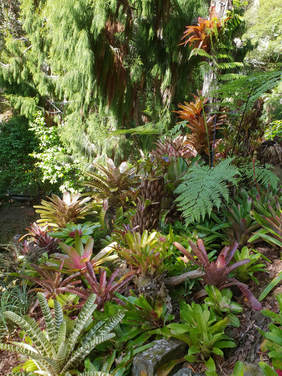 Bromeliads
​Our last trip for 2018 included two rather special places in Auckland:  Eden Gardens and Government House grounds, both in Epsom.

A quiet wander in the shady haven that is Eden Gardens is always good for the soul.

The garden had its beginning in the 1960's when it was an abandoned quarry on the slopes of Mt Eden.  Originally owned by Sir Frank Mappin as part of the now Government House estate, the quarry was gifted to the Government but rejected as an eyesore.

It was a farsighted horticulturalist, Jack Clark, who, together with a team of volunteers, took on the task of converting the quarry into the national showcase it is today -  five and a half acres of mature trees, the largest collection of camellias in the southern hemisphere and a maze of shady pathways, pools and rock gardens.

​In December perennials, vireya rhododendrons, daylilies and roses had burst into colour and we enjoyed a leisurely coffee at the excellent cafe in these lovely surroundings.

​
Government House grounds:  The opportunity to take a guided tour of the grounds of Government House is not to be missed and our group of 45 had been anticipating this visit for quite some time.    Outside the back entrance gates we met our guide, Lee, and were then ushered through.   The home of New Zealand's Governor General when she is in Auckland, and the venue for state visits, awards ceremonies and other official functions, it is built on a lava outcrop and the grounds feature many trees over 100 years old.
​
The estate was first built on in the 1880's or 90's and part of the original house still exists as the formal dining room.   Sir Frank and Lady Mappin bought the property in 1921 and set about establishing orchards and gardens, collecting rare plants and trees.    As part of the war effort, during WWII the lawn was dug up to plant vegetables to supply the families of servicemen, and the family Daimler was converted to an ambulance.   Later the former Auckland Fire Service headquarters building was purchased by Sir Frank and presented to the Order of St John.

Many other generous gifts followed but the most significant was the transfer of his house and grounds in 1963 to Her Majesty the Queen as a residence for the Governor General.
Our tour began through the woodlands area where 125 year old Moreton Bay and Port Jackson figs remain, then down onto the Governor's Lawn surrounded by ancient poutukawa and a magnificent blue atlas cedar planted by Lady Mappin.    This is the lawn where many of us remember the famous picture was taken of Princess Diana, Prince Charles and baby William with his buzzy bee.
​ 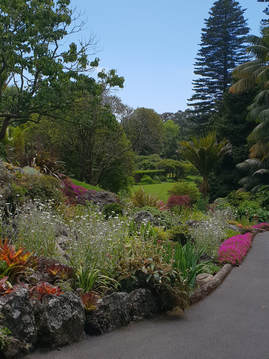 Later we encountered the lava field forest remnant and admired more ancient trees around the Mappin Lawn area - oaks, cedars, totara and a wonderful lime tree in bloom plus the fascinating dove tree.


We were so happy to see some healthy kauri and the interesting pennantia baylisiana, once listed as one of the rarest trees on earth, a conservation success story from the Three Kings Islands.

With "immaculate lawn envy" (these lawns can be mowed up to three times a week!)   we walked the impressive main entrance driveway back up to the house, past the colourful rock garden,  and prepared to leave.
Grateful for our guided tour, we also however couldn't help wishing we could have lingered longer with our provided  maps and tree notes to soak up more of nature in this beautiful place that is hard to leave.

Thank you to Lee, our guide, and to Government House Wellington staff for organising our visit.
All that remained to do was drive to nearby Melville Park  for a picnic lunch and yummy Christmas cake and treats provided by Derek, Gail and Wendy.     The Christmas cake was amazing!   Time to say Merry Christmas, Happy New Year and "see you on the track in 2019" to each other and hoping it's a safe and happy holiday period for us all.
​
​Thanks to Derek, Gail, Wendy & Sharleen for a lovely day.
Text: Sharleen
Photos:  Sue, Praemi, Molly and Sharleen 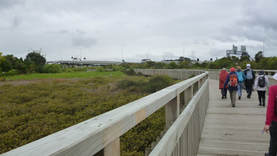 Setting out across the wetlands
​Our post-AGM walk was a gamble against the gloomy weather forecast with heavy rain and thunderstorms threatening.    However after our meeting, a lovely morning tea and wonderful talk by Dr Mels Barton about kauri dieback, the sky still looked blue enough so we chose to set off anyway.

To walk from Eric Armishaw Reserve in Pt Chevalier, across the wetlands,  through Waterview and Oakley Creek, up into the Unitec campus and return was the loop we had planned.
There was a lot to see – from the Waterview tunnel entrance, to the motorway network and above ground ventilation shafts  and control room for the tunnel.  Waiting for green lights to walk across busy highways with traffic thundering on overpasses crisscrossing above our heads was a quite an unusual experience.   So was spotting a small group of stinkhorn fungi bravely growing close by and looking a bit out of place.
​
​Des led us down to what is a very interesting historical site – the Waterview Heritage Area – where some of Auckland’s earliest industries began along Oakley Creek, once navigable to this point.

In the 1840s Edwin Oakley’s flax mill was here, later John Thomas’s flour mill, also brickworks, a tannery and a bark mill.  Extensive nformation panels with a timeline and historic photographs tell the story of these enterprises and the remains of an old Cornish boiler, foundations and stone walls have been preserved.   It is certainly worth a visit. 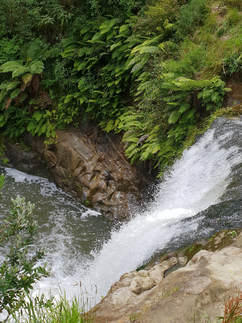 Beside one of the bridges is a plaque dedicated to Beverley Price who campaigned for the development of the walkway and was an accomplished mountaineer, tramper and teacher who ragically died on Mt Erebus.   While reading the plaque, we remembered our recent walk on the Beverley Price track near Puhoi, this track also named in her memory.

​Part of the walkway is undergoing repairs to boardwalk sections so we had to take a detour in order to see the waterfall (and shake our heads at the young guys jumping off into the creek below in spite of warnings signs not to). 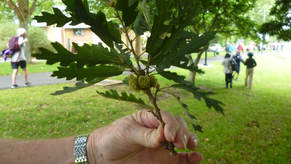 ​​Trees we did see before the rains came:  Turkey oak (Quercus cerris) with its unusual bristly acorns and Japanese tanbark oak (Lithocarpus edulis), an evergreen known for its tannin-rich bark and pungent smelling flowers.
With around 450 species of oak in the world, we have a little way to go to see them all!   We learnt that if it has acorns it's an oak, you can't tell from the leaves, there are so many different shapes and sizes of leaf.

There are many, many other interesting trees we couldn’t get to see due to the rain, they will wait for another time.
A big thank you to Des for putting this walk together and for his encyclopedic knowledge!

The original Wairere Track linked Matamata to the Bay of Plenty.  It was a traditional route for Maori, used occasionally by war parties and also to carry flax and pigs from the Waikato to Tauranga.  The true historic route is no longer sign posted as it was rarely used after the current stairwell was constructed on the main track.

Wairere Falls are tiered and drop 153 m off a steep escarpment formed by the Okauia fault line.  The challenge for the "A" group today was to walk to the top (rumoured to include more than 600 steps!).
​Twenty-two of us left Greenlane at 8am and headed south through Ngatea, Paeroa and Te Aroha to Wairere Falls (almost 2.5 hours).  We had a brief stop in Ngatea and just happened to park out front of the Ngatea Primary School - what a magnificient specimen of a tulip tree they have adjacent to their school gate. 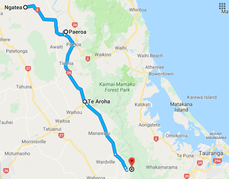 ​The last hour of the journey was a particularly pleasant ride, through lush green undulating countryside, with the Kaimai Ranges as a backdrop.  Nearly every paddock had stock quietly grazing - the sort of scenery tourists come to this country to see! 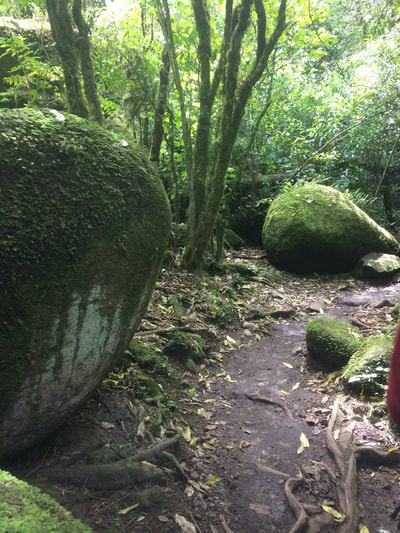 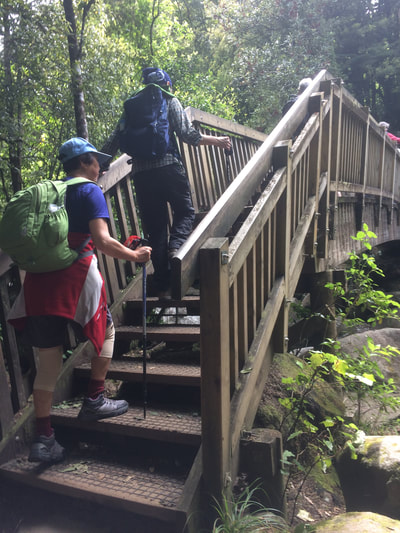 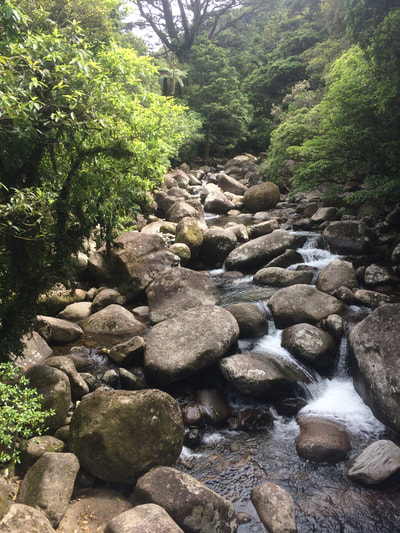 Fifteen minutes in, there was a one minute detour to Paddock 66, offering views west over farmland and back towards the Kaimai Ranges.  The local farmer is planning to open an ice cream shop here but is "still working things out" with Council.  ​
Back onto the track, we made our way up several steep sets of stairs into the upper gorge.  As we got closer to the viewing platform at the Lookout, we passed through a grove of nikau, puriri and kohekohe.  ​
​After taking time to admire the amazing view of the Falls, and to catch our breath, we commenced the climb to the Top Lookout.  The track climbed steadily and the path became more rugged although there were plenty of steps in the particularly steep sections.  Near the top of the hill the track winds through a rich mosaic of forest species with tawa. 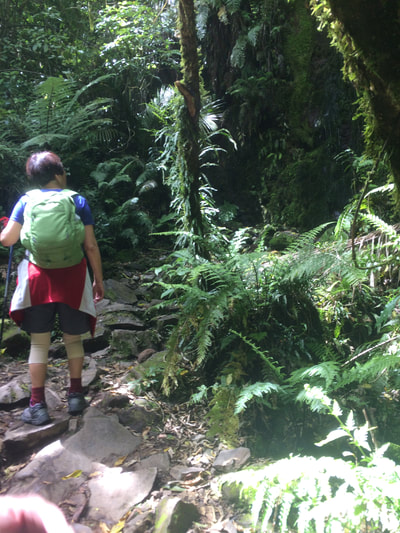 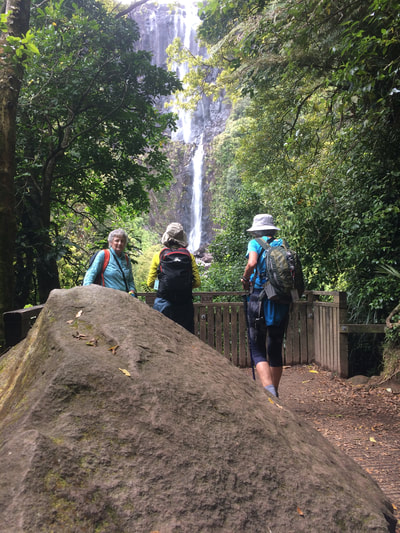 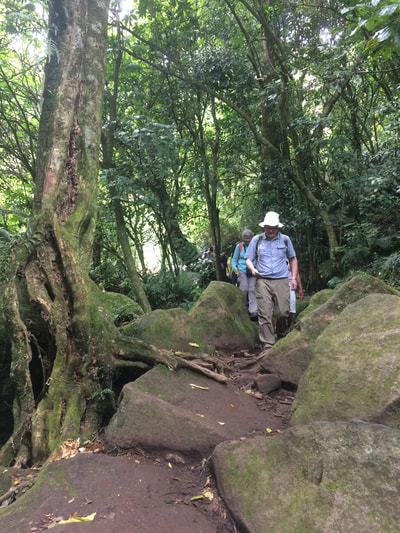 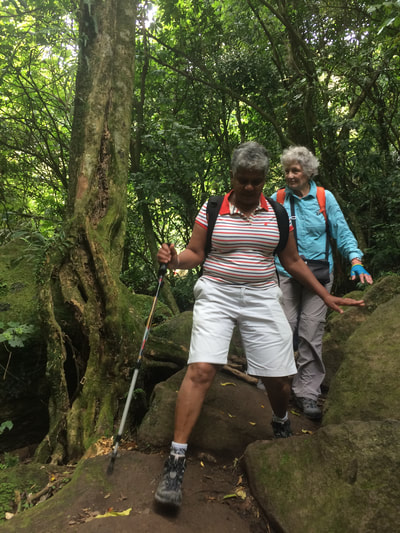 ​The gradient eventually flattened out before reaching the stream at the top and branching left to the Falls lookout.  And, what a lookout it is!  The views, looking back over the valley and the Waikato, are magnificent.
​We had mainly been under the canopy of the bush as we climbed so we took the opportunity to find a comfortable rock on the edge of the stream (in the sun!) to eat our lunch before tackling the descent.
It was great to see so many young people on the track, many with small children and dogs, out enjoying nature.  Several times we pulled to the side to let them pass.  A reminder that we aren't quite as nimble as we used to be in our 30's and 40's!!
​A special feature of this walk was the constant birdsong - incredibly beautiful.  Most prevalent were grey warblers and chaffinches.  We also saw, or heard, fantails, thrushes, shining  cuckoo, rosella, tui, skylarks and  cock pheasant.
A long but very satisfying day.  Wonderful scenery, great weather, plenty of birdlife and a real workout - a definite sense of achievement as we boarded the bus to head home.
Many thanks to:
Leaders:    Don & Derek
Text:          Linda and Bev
​Photos:     Linda