The date for our last walk of 2014 had arrived and a near-record number of 47 walkers enjoyed a sunny day at Clevedon Farmers Market and then a relatively easy walk at Duder Regional Park.   We all took advantage of the stop at the Farmers Market to  buy some treats (even whitebait fritters!) and wonderful coffee,  then continued on to the carpark at Duder Regional Park on the pohutukawa-fringed Whakakaiwhara Peninsula.    This is a 148 hectare coastal farm park with an interesting history.   It was the first landing place in the Waitemata Harbour of the Tainui canoe back in the 14th century. The archaeoloogical site of Whakakaiwhara Pa of the Ngai Tai people still remains on the tip of the Peninsula.    The land was bought by Thomas Duder in 1866 and his family farmed the land until 1995 when it was bought by the former Auckland Regional Council and it became a regional park.

We walked the farm park loop following the red markers through the farmland and up to the trig at the highest point.  From here the 360 degree views were outstanding and we could see many of the islands of the Hauraki Gulf.  Those who didn't want the walk up to the trig did a leisurely walk along the coastal track to a couple of pretty bays, Te Wharau and Waipokaia.  This route took us past the salt marsh which is a breeding ground for dotterel and where godwits, herons, kingfisher and spur winged plover are sometimes seen. Lastly there was a stroll down one of the farm roads to make the acquaintance of the famous resident herd of buffalo whose milk is used to make mozzarella and yoghurts.  It was the first time some of us had seen buffalo and the verdict was "rather impressive!"

Then it was time for our Christmas picnic lunch provided by the club and very capably organised by President, Derek and his wife, Gail.   As usual the food was delicious and tempting and some had second helpings of chocolate log!    It was lovely to relax in the sun on Umupuia Beach and have time to chat and catch up with old friends like Wendy on her first club outing since her illness.  Some  wandered up the beach to read the Duder family memorial plaques before our drive back to Auckland via the scenic coast road.


Thanks to Derek and Gail for an amazing lunch and to Molly and Sharleen for leading the walks. 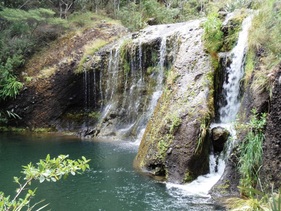 Waterfall on Lake Wainamu.
We had beautiful weather for our day in the northern Waitakere Ranges.

The morning walk was a loop around Lake Wainamu in the Bethell Te Henga Valley. It began by walking up a shallow stream bed beside the giant sand dune which has been formed over 4500 years. We ate morning tea beside the waterfall and the new Pou installed in April, 2014. We returned on the other side of the lake and over the sand dune - mostly compacted sand. There were lovely views looking down the valley.

We ate lunch at the upper entrance of the Auckland City Walk in the Cascades, while listening to John Stanilands talk about the Ark in the Park Project. It was initiated by Waitakere Forest and Bird members in 2002. John accompanied us around the track and and we were entertained and informed about aspects of trees and birds which the 31 walkers appreciated very much.

Did you know that very young Kauri create their own sun screen? Their brown appearance is due to a layer of carotene which protects them from UVA.  Also, a fascinating fact about stoats:  they can stop the fertilised eggs from growing inside the female for several months, until food becomes plentifull!!  And here's something for the coffee lovers amongst us - Early settlers used coprosma berries as coffee after roasting them!

Thanks to Margaret B and Praemi for this lovely walk. 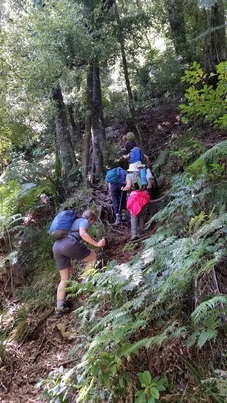 Some challenging climbing on the way up!
09 November  -  Mt Te Aroha


It was a lovely, sunny day as we headed off to Mt Te Aroha in our very comfortable bus.  Seated high up above the road we had a great view of the lush, green surrounding countryside.   After a quick stop at Ngatea for coffee and loos, we headed off again towards our destination.  Our walk started off quite gently through the bush on a metal pathway although climbing all the time.  The first lookout platform showed off the flat Waikato farmland in all its glory.   Then the track started to get slightly muddier and more challenging with half round steps set into the steep slopes of the mountain.   Fortunately there were lots of thick tree roots to help haul ourselves up.  Naturally we stopped (very briefly) to discuss names of trees and ferns and the odd bird whistle which were all identified by our knowledgeable companions.  We could tell we were getting high up as the track became covered in fallen beech leaves from all the beech trees on the higher slope, but it wasn't straight up all the time so on the flat bits we were able to stretch out our muscles with long strides.  About 3.5 hours later and some serious climbing behind us, we reached the trig station.    We had ascended almost 1km!


Having enjoyed the views of the Waikato plains through the trees on the way up, we had our lunch facing the bush covered hills on the other side where we could see the sea and Mt Maunganui.  Apparently on a clear day you can see Ruapehu, Ngauruhoe and Taranaki,  but not today.   Much refreshed from our lunch break we headed off down.  Climbing down the steep slopes was as hard as climbing up.  Some of the slopes were slippery and we had to take care. Again the tree roots were very useful!  The tramp down made us appreciate how high we had climbed and it was a long way down, but what a great day!

A few members who decided not to tackle the mountain spent a very enjoyable few hours exploring some of the many tracks on the lower slopes.  It was great to have time to soak up the sunshine, smell the honeysuckle and enjoy a grove of exotic trees we came across - the Community of World Trees.


Thanks to Derek, Gail, John and Janet for a great day.


History of the area
At 952m Mt Te Aroha is the highest point in the Kaimai Mamaku Forest Park and is part of an ancient volcano chain from millions of years ago. Back in February 1985, Te Aroha experienced a severe flash flood that washed boulders, mud and trees through the town.  Most of the shops and more than 50 homes were damaged and three people were lost. 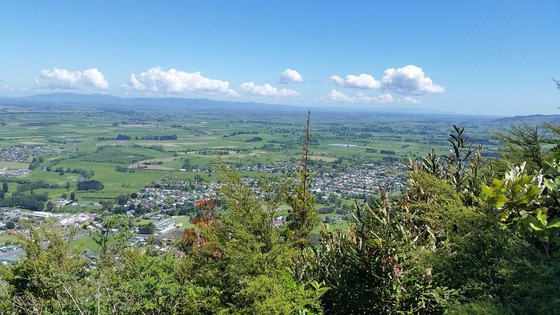 Breathtaking views on the way up