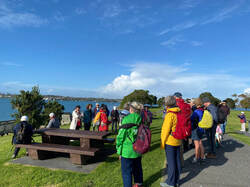 Praemi - giving a mangrove talk
​
​30 of us alighted from the bus on a crisp sunny morning and proceeded across the Mount Wellington War Memorial Reserve, past the Panmure Rowing Club adjacent to the Panmure Wharf, and along the riverside walkway leading to Point England. Along the way we observed boats on the water and views across the estuary to Bucklands Beach. 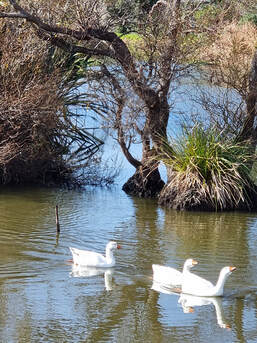 ​We continued into the Tahuna Torea Nature Reserve, which means “the gathering place of the oyster catchers”. We walked through the wetland area to a viewing platform on the estuary, passing a pond with black and white swans, white geese, pukekos, stilts, ducks and moorhens.

​The track continued through manuka and kanuka to a sandspit lookout, which provided views along the sandspit, the estuary mouth and across to Musick Point. The tide was too high to walk along the sandspit. We returned to the bush walk and passed numerous named trees including a small pohutukawa grove and young karaka, rata, kahikatea, rimu, totara, nikau palms and cabbage trees. 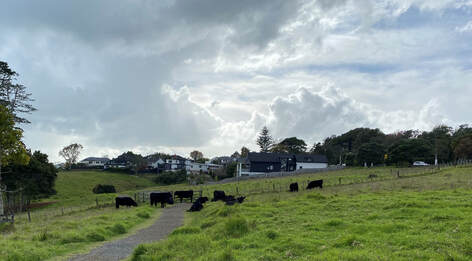 Cattle - Churchill Park
​
​​Following lunch at Roberta Reserve we walked up Churchill Street to enter a narrow coastal pathway through to Clouston Street, then through Churchill Park to Peacock Street and down the steep descent to Karaka Bay.

​We passed some karaka trees, after which the bay is named, saw baches dating from the 1920s, and heard about some of the colourful characters who have lived there over the years. 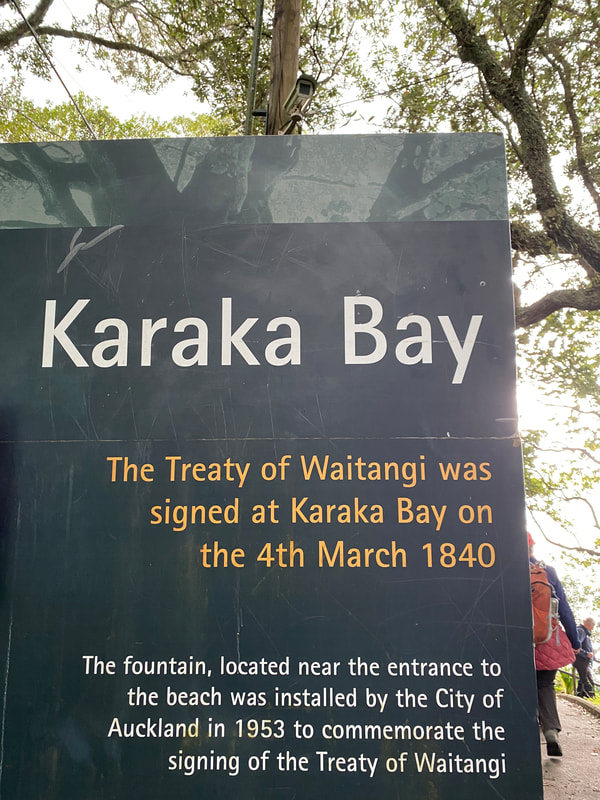 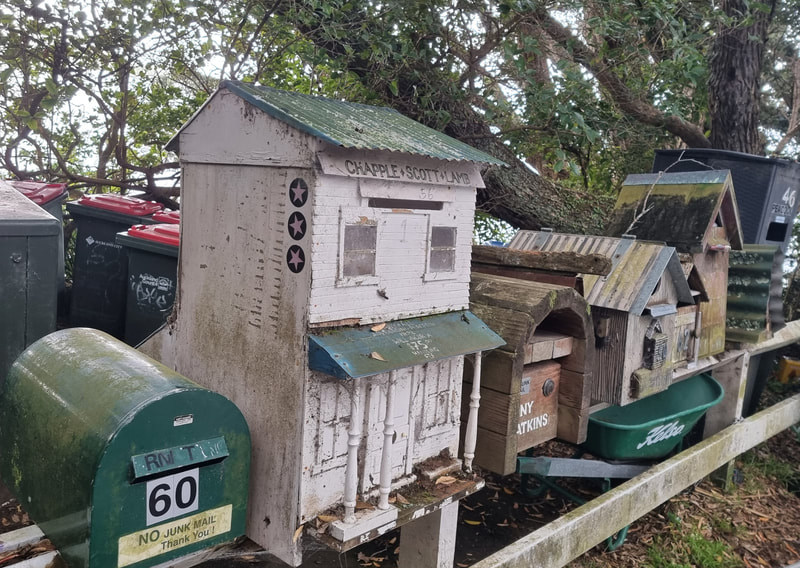 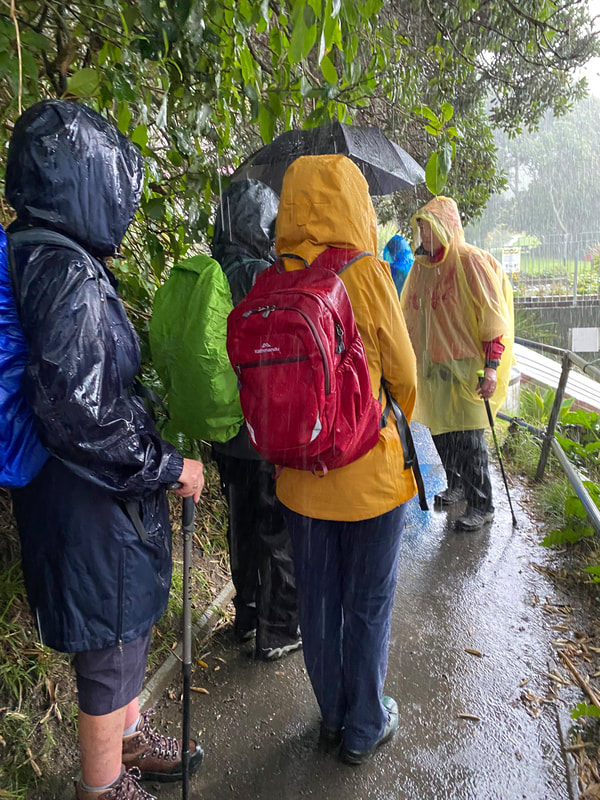 ​Unfortunately our time there was curtailed by heavy rain, hail and thunder. A very wet group returned to the bus for the homeward trip.
​Thanks to our leaders, Lawrie and Viv for a day full of variety (including the weather!).
​Special thanks to Praemi for her interesting talk on mangroves, and Gilbert for counting the herons.
Text:      Viv
Photos:  Cheryl, Frankie and Linda
​

16 May - Awhitu Lighthouse and Regional Park

​We felt so lucky – a perfect Autumn day that had not been promised by the weather forecast.   It had been five years since the club had been out to Awhitu, and the first visit for some of our members. 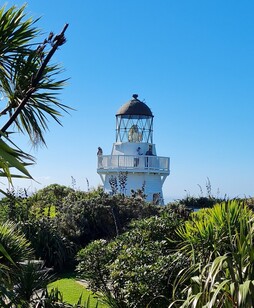 ​After enjoying the drive south through Waiuku and out to the tip of the peninsula, we held our breath as the bus negotiated the  potholes in the lighthouse access road.   Good work and thanks to our driver Joe!

The very picturesque Awhitu Lighthouse is a faithful replica of the original lighthouse built using some of the original parts, including the dome and lens and is managed by the Manukau Heads Lighthouse Trust.  The first lighthouse was built back in 1874 as a result of the wrecking of HMS Orpheus on the infamous Manukau Bar.   manukauheadslighthouse.org.nz/

There is a lot of information to absorb about the history of the lighthouse, signal station, Orpheus wreck and life at Manukau Heads in the early days, all well presented  around the site.    It was great to be able to climb the stairs inside the lighthouse to fully appreciate the 360 degree views  and look down on the extensive native planting done by volunteers.   We just could have done without the noisy drone that was being flown around us at the time! 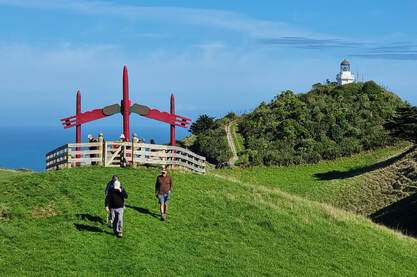 ​​As well as savouring the wonderful views out over the harbour to Whatipu and beyond, we walked a new, short trail over farmland to an area where the story of the early Maori in the area was illustrated on storyboards and  several pou, with a dramatic carved entrance.
​Our next stop was Awhitu Regional Park where we began by walking along Kauritutahi Beach to Brook Homestead.    The route we would usually take is through the restored wetlands where wet feet was pretty much always the case.  This path is currently being upgraded and timber, wooden posts and a couple of diggers were on site – good news, it will be a great improvement.
​ 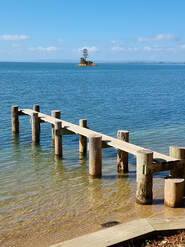 Brook Homestead, built by Sarah and John Brook back in 1878, is beautifully maintained and brought to life with stories and photographs depicting pioneer life displayed outside.

​ We spared a thought for Sarah bringing up five children here on the farm with no electricity and with the jetty they built as their lifeline for supplies.
​
Most of us walked the Settlers Valley Walk through bush, over farmland then up to a platform lookout before descending through native plantings which commemorate the 150th anniversary of European settlement in the area, before completing the loop.
A lovely Autumn day and a visit described as “enriching” by one of our members.  It was great to be joined by old friends Derek and Gail.   (Thank you Derek for your help with the planning).
And thanks to leaders Anne and Sharleen for organising the day.
Text: Sharleen
Photos:  Praemi, Cheryl and Lyn.
​


​
2 May - Lake Serpentine and Kakepuku Mountain
​This proved to be a popular walk having been cancelled previously due to Covid. 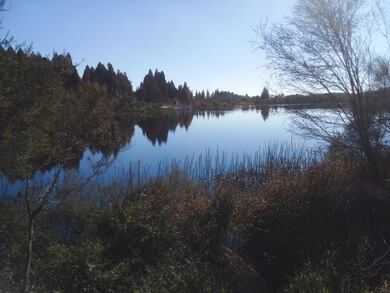 ​
On a glorious day 37 of us set off firstly to the Serpentine lakes in the Waikato. These lakes are remnants of a larger peat lake (Lake Rotopiko) which was in turn part of a chain of more than 30 lakes sited along the course of the Waikato river.

​
Drainage of these lakes for farming in the early days lowered the water levels. We were treated to a beautiful view of the East Serpentine lake prior to walking around it in the sunshine. 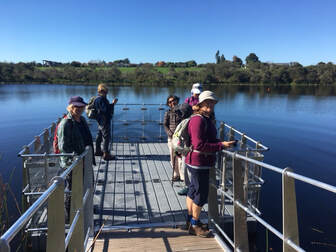 There was evidence of lots of native planting which is taking place to replace exotics planted in earlier years, as the whole of the peat lakes are restored to their former state, including a mammal exclusion fence around all three lakes.

​Rushes which we saw on our walk were responsible for forming the peat layers as they break down, and the peat is now known to be even more efficient as a carbon sink than forest.

Passing through Te Awamutu, we arrived at the base of the track to the summit of Mt Kakepuku. 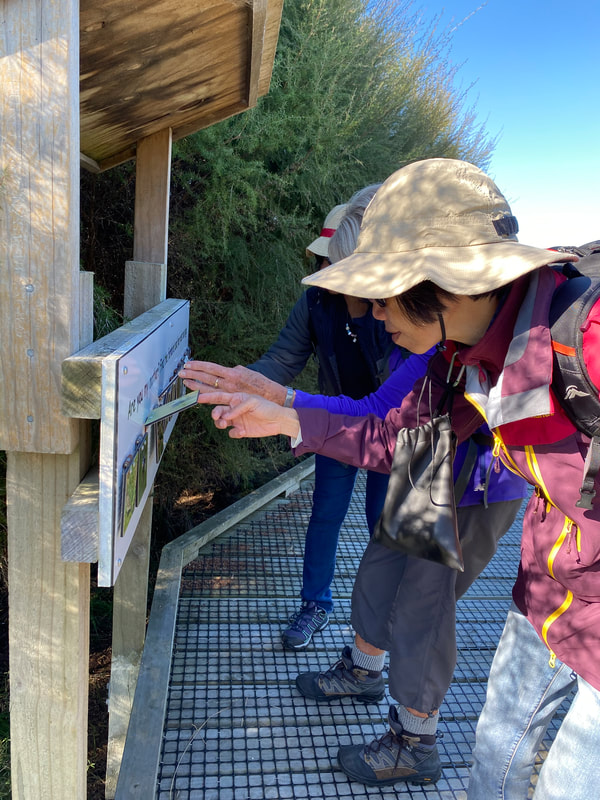 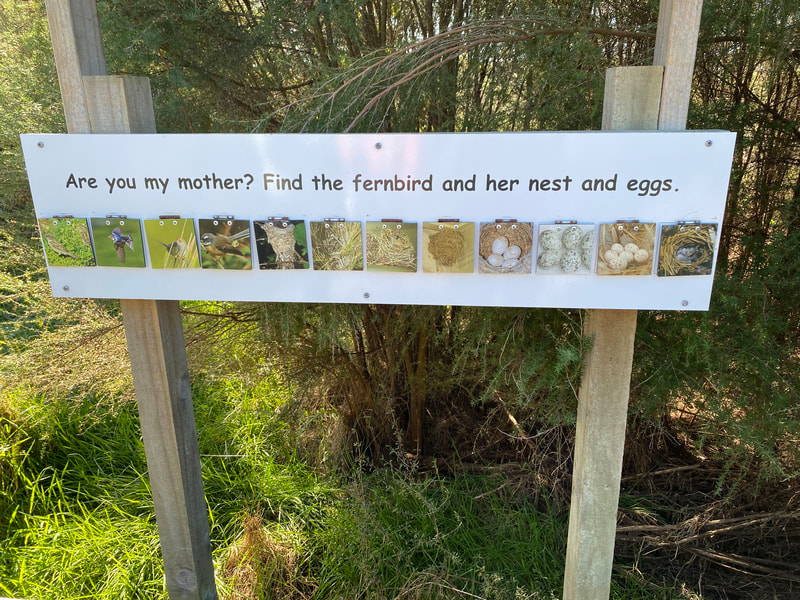 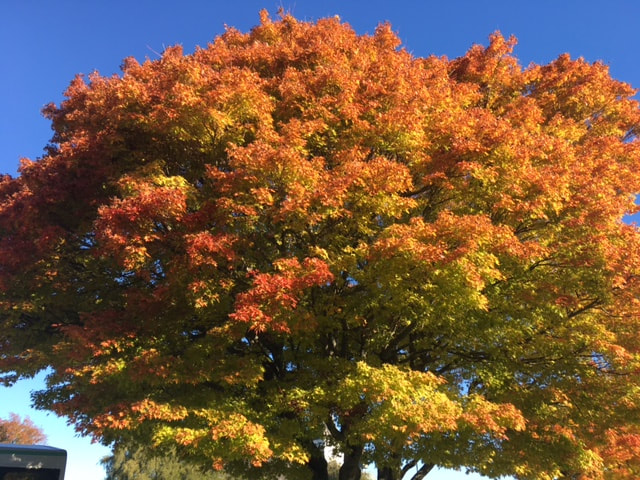 ​As the 'A's got higher the track became a bit narrower with many steps in the final climb to the top. A carved archway welcomes walkers to the original pa site which leads up to a lookout tower and a trig station.

The ascent was worth it for the great views of Mt Ruapehu to the east and Mt Pirongia to the west. 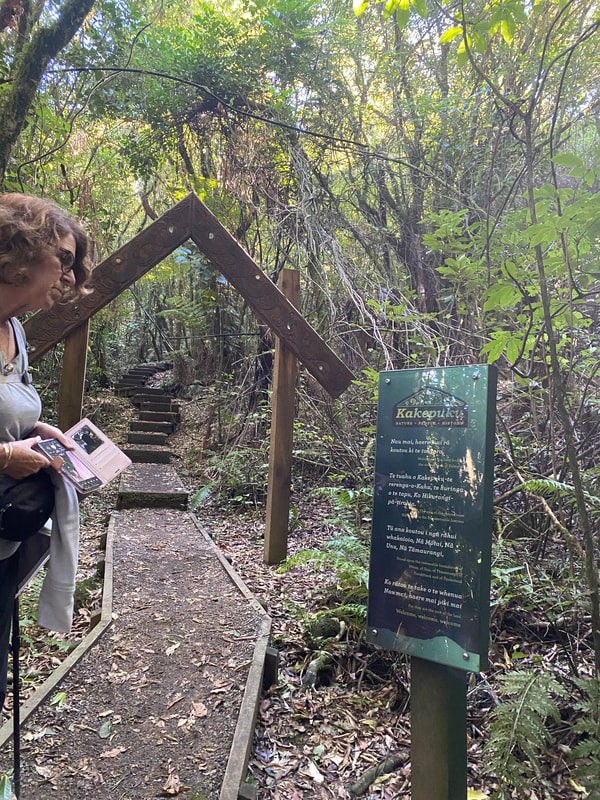 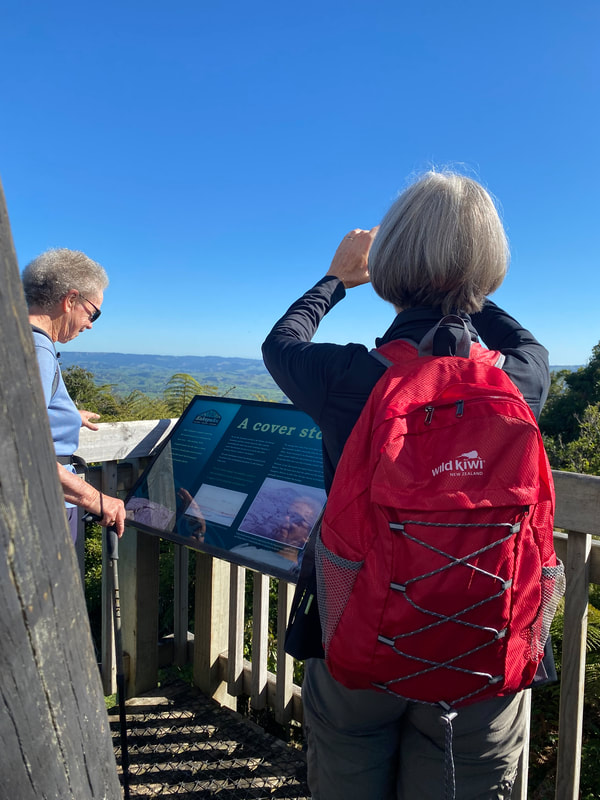 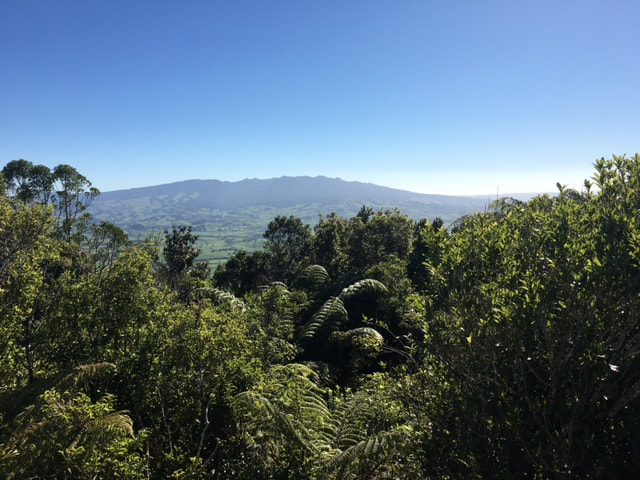 ​On the way down the mountain we saw/heard greenfinches, tui, rosellas and grey warblers. Rumour also has it that a grunting pig was heard close by!

This trip had something for everyone and although the journey was longer than usual it was well worth the time.
​
Thanks to our leaders, Fiona, Anne and Christine for introducing us to these great new destinations.
Text:      Christine
Photos:  Fiona and Linda 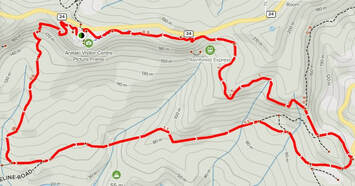 Despite the torrential weather of the previous day, 27 cheerful walkers piled on to the bus with the prospect of enjoying the gradual reopening of the Waitakeres. It was a challenging effort for our driver to navigate the large bus up to Arataki.
20 walkers opted for the A walk which included the Slip Track. This part of the track reopened in July 2019 after a major makeover.

From Arataki we walked through the boot cleaning station and up to a lookout platform.

The platform afforded a superb view over the Waitakeres, Lower Nihotupu dam and the Manukau Harbour. ​
We proceeded down the Slip Track which descends steeply down some 60-70 steps.  The sculpture on the lookout platform depicts the gradient rather well!  We were glad to be descending rather than ascending this part of the track.

The track crosses the Waitakere tramline which is a narrow gauge rail line for 2.5kms length, used for maintaining the dam and water pipeline. Until 2014 it was also used for tourist excursions.​
It took a half hour to reach the bottom of the track where we joined the Pipeline Track.
​

We stopped for a brief morning tea break and view the large pipeline stretching out along the Pipeline Rd.

​We continued our walk along the Pipeline Road, through mature bush including ponga, nikau, five finger, and some rimu, the road rising gradually with a good surface.

​Further along on the right there was a large area of a black substance that looked a bit like bitumen. We discovered this is biosolids waste from the waste water treatment plant. These organic solids have been treated to comply with land application guidelines. Watercare produces some 140,000 tonnes of biosolids per year in Auckland amounting to 1600 tonnes of total nitrogen production. The nutrients in biosolids therefore provide an opportunity to help enriching land naturally as opposed to the use of chemical fertilizer.


After 1hr 45 minutes we reached Mackies Rest at the end of Exhibition Drive, where we stopped for our lunchbreak.
From there we continued up the popular Beveridge Track, arriving back at Arataki around 50 minutes later.
​From Arataki we crossed the Scenic Drive to explore the Nature Trail and Upper Loop walks for the next hour. Both  A and B walkers did these trails - an opportunity to refresh our knowledge of plant identification.
We then returned to the Visitors Center to enjoy the displays, the views and the video.

Many thanks to Molly and Jennifer for a most interesting day out in the Waitakeres!
Text: Jennifer
​Photos: Jennifer and Sharleen