Trip Reports:  June - July 2021 and 95th ANNIVERSARY LUNCHEON
​
18 July - Rangitoto Island - Cancelled due to weather conditions
11 July - 95th Anniversary Mid-Winter Christmas Luncheon
​2020 was to have been the year when the club celebrated its 95th anniversary (founded 1925), but alas the worldwide virus Covid 19 arrived and curtailed all social gatherings. 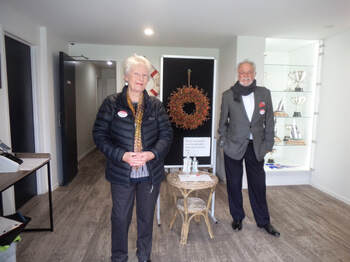 However, a year later, 78 people accepted the invitation and here we were coming together and celebrating the “belated” 95th with a mid-winter Christmas luncheon at the Milford Cruising Club on the North Shore.


​The venue was the perfect size for our group of current and retired members. 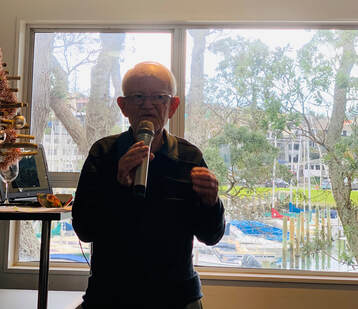 Des - relaying old adventures!
​The caterers did a marvellous job with the Christmas buffet – lamb and ham with all the trimmings as well as a vegetarian option.  There was much positive feedback.

At the end of the main course, three speakers were introduced by Janet, our MC for the day – Chris Rabey, Derek Nelson and Brenda Berryman.

They hadn’t been provided with a brief but they all entertained the group with very diverse stories of their years with the club.

Time for dessert – mini pavlovas and apple crumble with raspberries!

Up next, our final three speakers – Des Mitchell, Shirley Glendinning and Janet Lowe.  Enjoyed by all, but newer members were especially intrigued with their pre Health & Safety stories.  What adventures they had!
​
​Our guests were asked to bring just one thing to the luncheon – a special memory of their time with the club to include in the 95th Memory Book, destined for the club’s archives. 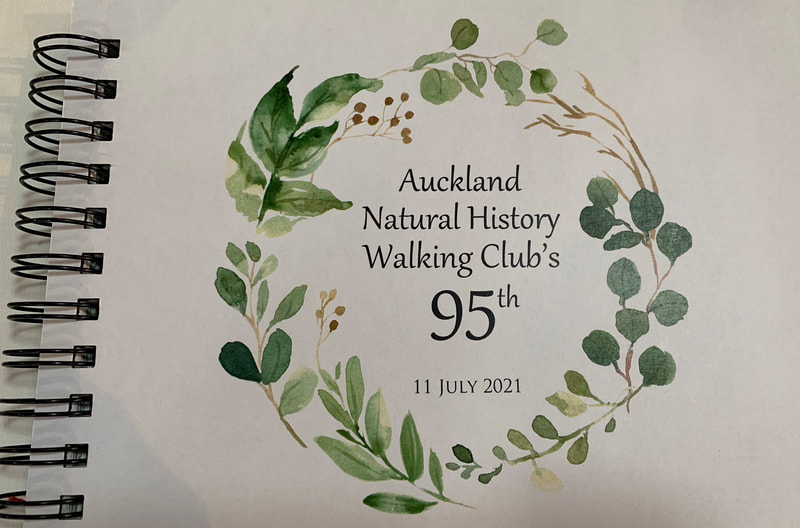 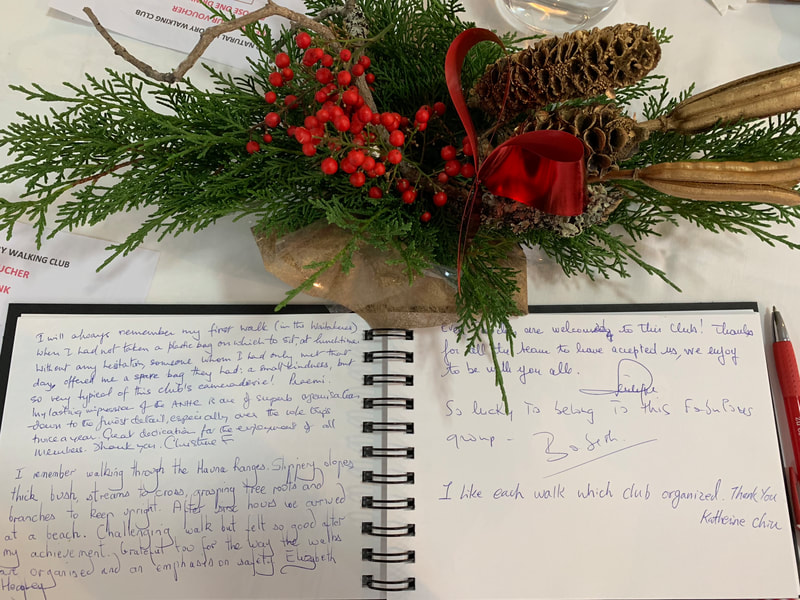 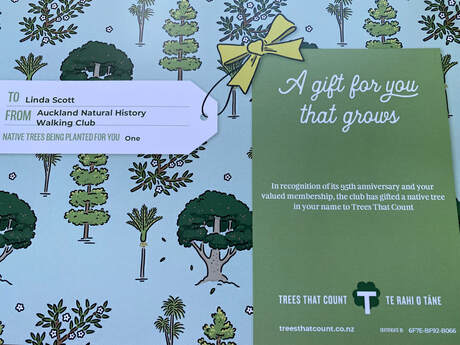 ​To commemorate the 95th anniversary, the club gifted everyone present with a native tree.

No – they didn’t have to carry a tree home!  They were each presented with a certificate thanking them for their individual donation to an organisation called “Trees that Count”.

Trees that Count aim to make it easy for Kiwis to make a difference and plant millions more native trees.  They do that through their community marketplace which matches funded and gifted trees with worthwhile planting groups throughout the country.

Trees that Count, managed by Project Crimson, will give the 78 trees (gifted in each member’s name) to a community based planting group - hopefully close to Auckland so that we can visit on one of our Sunday walks. 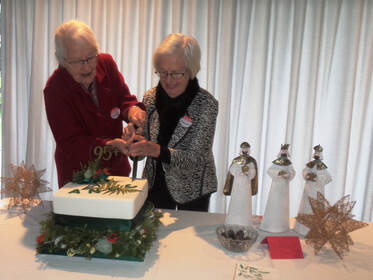 Barbara and Hannah doing the honours!
The afternoon was nicely concluded with tea, coffee and the cutting of the cake by two of our "special" members.


Thank you to the committee members for their contributions to the day, especially Marilyn for organising the cake and for creating all the table decorations.   And to Linda, our president, for her event planning skills.


Photos by Katherine and Sue - many thanks!
​And, a group photo, kindly taken by Hannah’s daughter, Suzy. 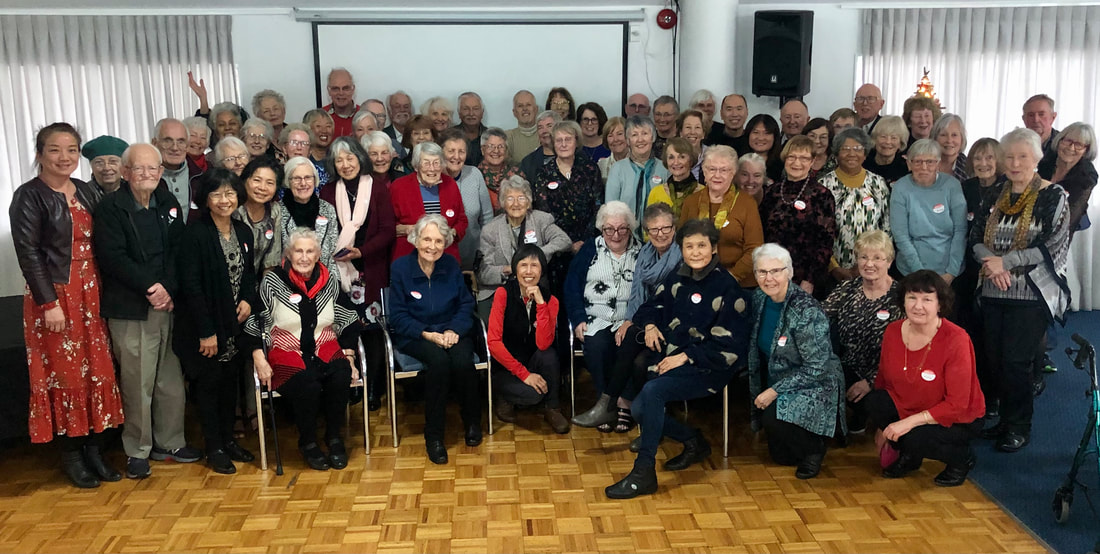 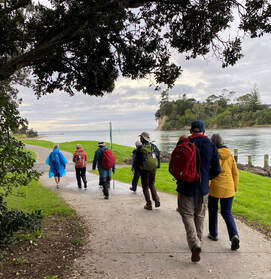 ​On arrival at the Estuary Arts Centre all twenty three of us prepared ourselves for the walk of the day.

As it was high tide, we started at the end of Orewa Beach and walked part of the walkway and also some of the beach. 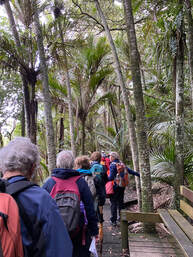 We had morning tea near the township end and then continued, leaving
the beach and crossing under the road to Alice Eaves Bush.
​

This bush is described as a mini rainforest of the North Shore. It consists
of 40 acres of magnificent kauri and many other native trees.   It was gifted
​in 1956 to the County by Alice Eaves, a former owner of Orewa House.
On leaving the bush we found Orewa House just down the road.  Here Shirley gave us a short talk on the history going back to the pioneer days of the 1800’s.

On our way again across suburbia, Victor Eaves Park and through to the serene Maygrove Lake where we had lunch. We then crossed over to the Estuary Walkway and Cycle Track, where we made our way back to the Arts Centre, a well-earned coffee and time to peruse the exhibition for the month which was Pastels,  and then we headed home.

It had been five years since we had done a historic ramble around Otahuhu and Mt Richmond, exploring some of the significant parts of the area.

Mt Richmond
A number of the magnificent trees on Mt Richmond date back to the 1890s and tower over the two volcanic craters, kumara pits and the terraced remains of the pa.  Of special interest to us were the large number of ancient Moreton Bay fig trees (Ficus macrophylla) and we learnt how to tell these apart from the Port Jackson figs (Ficus rubiginosa).    (Thank you to Praemi).    We will look more knowledgeably now at the size and shape of the leaves,  the length of the stalks and the buttress roots.
​
Portage Route
Now named Portage Road, this is the narrowest part of New Zealand  (from coast to coast) and was the historic route used by Maori to haul their waka overland.  Nowadays this is remembered by waka ama competitors recreating the journey with their outrigger canoes.     It was great to discover that a plaque commemorating the Portage Route has been reinstated on the corner of Atkinson Ave and the Great South Road.
​
We heard about the Canal Zone and the historic plan for a waterway between the Waitemata and Manukau Harbours. 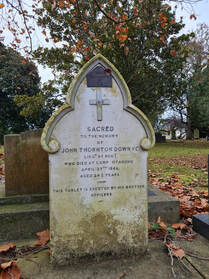 ​Fencibles
At the old Anglican cemetery on Church Street, we found the headstone of John Thornton Down, who died in 1866 and is thought to be New Zealand’s first recipient of the Victoria Cross, and also William Murphy, a fencible who came on the first ship in 1847.   Fiona gave some interesting background on the fencibles who settled in the area in the 1840s.

After walking through the public cemetery opposite, we emerged onto  Atkinson Avenue and then to the Great South Road and Mason Avenue. 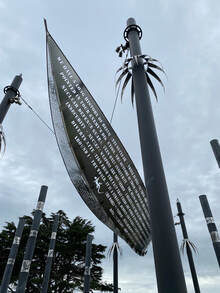 Our next significant stop was at the sculpture which commemorates the life of David Lange, New Zealands youngest Prime Minister at the time, from 1984 - 1989.

This stunning piece of sculpture is by Virginia King and we spent time admiring the symbolism and artistry of this work so well situated in its beautifully landscaped location on Mason Avenue.    We were reminded of the nuclear-free legacy that David Lange has left New Zealand.

For details of the memorial design and iconography, see issuu.com/aucklandartsandculture/docs/david-lange-memorial-booklet

Frank Andrew Mural
Otahuhu streets boast many colourful murals depicting the history of the area.  One of these illustrates the seed,  grain and transport business of Frank Andrew (generations later John Andrew Ford of today).  We thought about how far transport has come since those days of horses and coaches  taking two hour trips between Auckland and Otahuhu? 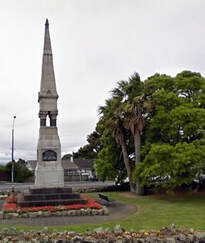 Monument Reserve
Next on our trail was the famous triangle of land on the corner of the Great South Road and Mangere Rd where three war memorial monuments are sited - the Nixon Monument, the Mounted Soldier and the Railway Workshops sundial memorial.
It was noted that the Nixon Monument has become controversial in recent times (as have many others around the world) as it commemorates an uncomfortable episode in our history.  Colonel George Marmaduke Nixon led the militia during the Waikato Land Wars and his troops were responsible for the deaths of many Maori women and children. 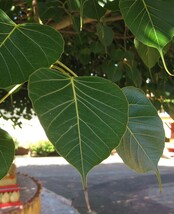 Bodhi Tree (Ficus religiosa)
Close by, and our final stop, was the Lao Buddhist temple in Nixon Avenue.   Attracting our interest here was a very unusual tree - the Bodhi tree, or sacred fig (Ficus religiosa).   These trees are said to be descended from the original tree under which Buddha received enlightenment and have great significance to Buddhists.  The leaves are a striking heart shape.

Thanks to Fiona and Sharleen for leading this walk and to Praemi for her research.