Thirty-four keen walkers with an age spread of 20 to 80 years started at Karangahake Gorge, crossing the Ohinemuri River bridge 10 at a time.  We walked up the Crown Tramway Track, on the left side of the Waitawheta River Gorge, enjoying spectacular views of the rugged cliffs with the river below.  Further on we crossed the river and ascended to the end of the original tramway.  Informative signs on the far bank gave us details of the Crown Mine.

Des explained how the original route went through the cliffs via the Crown Stope (hair-raising!), but our track carried on against the cliff and we had morning tea by the old tunnel that had carried the Paeroa water pipes.  Using our torches, we negotiated the tunnel and re-crossed the Waitawheta River.  A steady climb on the Dubbo Track then took us through bush with the cicadas singing and after a short descent we stopped for lunch.

We carried on climbing through the beautiful native bush with tawa and rewarewa covering the track, when we spotted white rate flowering.  Reaching the Country Road, we descended towards our waiting bus along a metalled surface, passing several old mine shafts on the way.  Finally, the Scotsman’s Gully Track was a welcome shortcut as we were in the cool bush again.

For both variety and interest this was one of our best walks yet!

Thank you John, Brian and Donald. 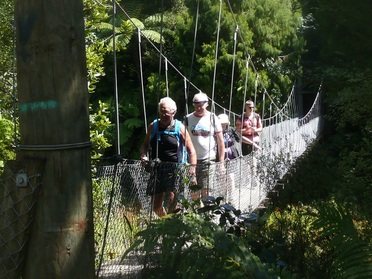 Our first walk this year was a ramble through Central Auckland.  We saw many houses in well-to-do Remuera and Epsom that had been built by important historical figures.

The Morrin brothers (after whom Morrinsville is named) built a large house near St. Kentigern’s; another is “The Pines” in Owens Road  (named after Owen who bought a good deal of land in this exclusive area).  The multi-storey development known as “The Towers” was the owned by the Graham brothers and was the first development of its kind in Auckland.  Florence Court built by the famous Hellaby family was in Mountain Road and well worth looking at.

We had a look around some of the large school gardens in the area and learned something of their history.  St Kentigerns boasted some exotic trees:  a holm oak with its small leaves, male and female Australian podocarps, a macadamia tree (also an Australian native), an Algerian Oak with quite large leaves and a huge Timbo tree, a member of the mimosa family found in some parts of South America.  We also visited Baradene and Kings’ Schools in Remuera.

Finally we visited Epsom/ Mt. Eden where three areas of the Auckland lava Forest remained:  Eden Gardens near Government House, some bush near Almorah Road and Withiel Thomas Reserve behind Mercy Hospital.  The section near Almorah Road had been under threat of development in the early 2000s, but a joint effort between Forest & Bird and the Auckland Natural History Club succeeded in stopping the area being disturbed.

We walked through the Withiel Thomas Reserve: what a surprise to many of us!  How many cities can boast a lava forest right in the heart of it?  We picked our way carefully over the rocks and observed titoki and pukatea.  Some native broom was also evident.

Thank you Des for another informative tour through the heart of Auckland.