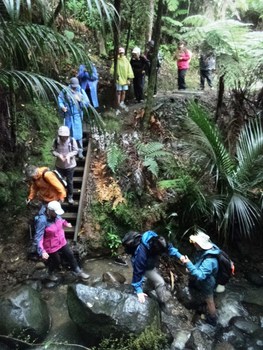 John gives a helping hand over the rocks
From here our group of 34 split into two groups, an enthusiastic majority choosing the A walk.  After the all important cleaning and spraying of boots (done a few times) to protect against kauri dieback, the A group continued along the Pipeline Track.  It was very much up and down, a very rocky surface (made like that for vehicle access) at one part, then tree roots to be wary of.    This track led to the Lower Nihotupu Dam Road and then onto the Hamilton Track where we encountered waterfalls and negotiated a tricky stream holding onto a hand chain.

Board walks were welcome and we could look down at the plant life and a kauri knoll.   We were treated to the expert informative knowledge of plants and trees by John and Brian which was very interesting for us all.

At the Hamilton Saddle we followed the Crusher Pipe Track then onto Smiths Road.  Our lunch stop was at this junction, the cloud had cleared, the sun was shining and there was "provided concrete seating" at our disposal!   A bridge took us over the upper reaches of the Lower Huia Reservoir and then onto Huia Dam Road.  We were all very impressed by the Lower Huia dam face, the newest water supply dam in the Waitakeres,  and were fascinated by the funnel spillway.  From here it was on to the short Parau Track - Farley Track - Dam Road and the welcome sight of our bus at Huia Bay.   Every walker in this group did extremely well keeping together at a pace suitable for all.  Well done. 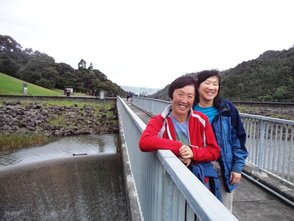 Janet and Rebecca at Lower Huia Dam
Meanwhile the B group  followed  a different gentler route up the grassy undulating Pipeline Road leading to the surge building.  An inconspicuous slippery bank led up to a secluded track through the bush. This was muddy after all the rain, but peaceful and a complete contrast from the previous better formed trails.
This path emerged into Exhibition Drive, which led uphill to the replica of the 1913 seat at Mackie’s rest, with its expansive view over the city, and commemorative plaque. We took the Beveridge Trail, stopping to look at the entry to Monkey Drive Tunnel, which is reportedly full of wetas. There were glimpses through the trees of views over the native bush to the Manukau.
The trail continued through an area of labelled trees and the Heritage Park at the Arataki Visitor Centre. This time we could enjoy the extensive views from the Centre, and following lunch, we had a quick look at the displays inside the Centre. A chart showing the fruit and seeds tui eat over 12 months of the year was particularly interesting. It showed that puriri trees provide tui with food for the full 12 months.

The bus then took us to the Huia foreshore. We walked along Dam Road, and over the suspension bridge onto the Parau Track which had numerous tree ferns in the relatively sparse vegetation. This led to the Farley Track, which passed between numerous young kauri trees, then opened onto a grassy bank overlooking the Lower Huia Dam and circular spillways. The volume of water spiralling down after the recent rain was impressive.
We returned to the bus along Dam Road, beside the water from the spillways flowing down to the sea.
Thanks to leaders John and Don,  and to helpers Anne, Viv and Rita for a great trip.
Text: Rita and Viv.     Photos: Sue and Steve

This walk was “A Desmond Classic.”  We started in Smith’s Bush which is not a natural bush area at all but a planted forest.  Des explained how forest trees grow by seeking light and trying to maximise the water they absorb from the soil.  This leads to competition between trees (even trees of the same species). The picture he painted of the “warfare” going on in the bush was not a pretty one – but more in keeping with the idea of nature being “red in tooth and claw.”

In Smith’s bush we saw large numbers of puriris and kahikateas that had been planted and by now have formed the top canopy of trees.  Coming up under them were plenty of karaka seedlings spread by kereru that love eating the fruit: when they excrete the seeds, which they can’t digest,seedlings grow from the still viable seeds.  We saw buttress roots on the kahikateas: they are needed to prop the trees up, as they grow to be the tallest tree in New Zealand.  Many puriri trees showed holes made by puriri moths.  A matai (with its “hammered bark trunk”) was another notable tree here.  (For photographs of the kahikatea buttress roots and the many fungi we saw, please go to our Photo Gallery.)
​We then walked on through the Awataha Marae to look at the North American totem pole gifted to Auckland by Canada during the 1990 Commonwealth Games.  Unlike a Maori Pou the totem pole includes animal heads as well as birds – something never found on a Pou, because there are no corresponding native New Zealand mammals.
​To get to the Tuff Crater we had to walk along a few streets, but in a short time we were on another bush track around it, pleased to see koromiko in full bloom and some poroporo and the occasional ngaio.  Des explained how the tuff ring is formed in different layers laid down through various geological periods. Along the track through the mangroves, we walked through native bush that many don’t even realise is there!
At Onepoto Basin, we had an early lunch before carrying on to Kauri Glen Reserve.  This is another gem that is little known, on the North Shore.  Des told us that except for Smith’s Bush, most of the other North Shore reserves go through gullies and the vegetation in them has developed accordingly.  This type of bush has the tall trees that form the canopy as well as smaller trees, bushes and undergrowth (with many ferns and fungi). 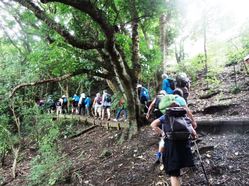 Walking into Kauri Glen Reserve
​After dutifully cleaning and spraying our boots, we entered Kauri Glen Reserve to see not only kauri, but some podocarps like totara and miro and other common trees and bushes:  mahoe, mingeminge, hangehange.  Eventually we came to an unusual sight: a whole grove of kohekohe!  This distinctive tree, with its flowers and fruit coming directly off the main trunk was perhaps the highlight of the day.  Such trees exhibit a phenomenon known as cauliflory (caul = trunk) and are usually found only in the tropics, so this tree is a very uncommon one for New Zealand.  (For images of kohekohe flowers, fruit and leaves please go to our Photo Gallery.)
We finally headed to the bus, parked near Little Shoal Bay, well content with our day’s walking and botanising.

A big Thank You to Des for a great walk and to those who helped to keep the group together on the day.
Photos: Sue and Praemi 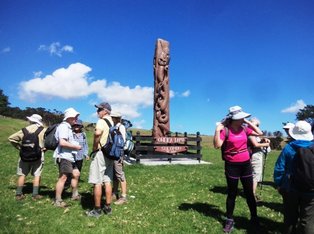 Pou overlooking Solomon's Bay
Atiu Creek Regional Park, gifted to Auckland by Pierre and Jackie Chatelanat back in 2006, is a farm park fronting the Oruawharo River and the north-eastern reaches of the Kaipara Harbour.     There are a number of walking, cycling and horse riding trails in the park, many giving outstanding views of the harbour.

From the carpark our walk began westward with the important cleaning and spraying of boots to prevent kauri dieback, and passing through the two impressive Pou Kaitiaki on the Oruawharo River Trail.  Continuing along a ridge line, we passed below Heretoka Pa.  Many of the farm paddocks were named and we read the story of Rua, the huntaway sheep dog who is buried in "Rua's Paddock".   The views from here were magnificent on a beautiful clear day as we descended to Solomons Bay and the giant Oweka Tapu pou overlooking the bay.
​
By midday as temperatures kept rising, a cool, shady area under some trees became a welcome lunch stop.   The return journey and completion of the loop walk took us past the woolshed where poplar trees lining the uphill route were turning gold reminding us that Autumn is just around the corner.

Thank you to Elane and Anne for a very enjoyable day.
Photos:  Sue.

Thirty-eight hardy souls dragged themselves out of bed to be at bus pickup points between 7 and 7.30 a.m. for our trip to the Karangahake and Waitakauri area of the Waikato.  Leaving Auckland’s grey skies and drizzle we found the weatherman didn’t lie and the promised sunshine welcomed us into Paeroa.  Traveling first to the Karangahake Gorge Reserve car park, eighteen of our less adventurous walkers were dropped off to do their own thing.

Our more adventurous group continued on the bus to the Golden Cross Mine site.  It reopened in 1991 using open cast and underground mining methods, ceasing production in 1998.  New Zealand’s modern day closure requirements are stringent and the area has been rehabilitated.  The open pit has been capped, recontoured and 100,000 native trees have been planted to enhance wildlife habitat and protect the stream banks. ​ 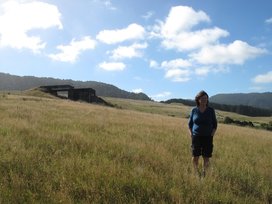 Our leader for the day, Molly.
The group did a short walk to look at some of the concrete structures left from the processing plant in a paddock close by and admired the views toward the Kaimai Ranges.  Returning to the car park we set off over the stile and up the farm track to the start of the Maratoto Track.  The contrast from exposed farm track into the coolness and darkness of the Maratoto track was startling.  The native plants thriving, perfect specimens of nikau palms, coprosma, punga ferns, umbrella moss, parataniwha, filmy fern and many more welcomed us.
The track although well marked thanks to Doc, might be described by some as more of an obstacle course than a walk.  Walkers needed to take care as we encountered fallen trees, low branches, narrow and eroding track, and seven stream crossing.  We stopped along the way to look at a mine entrance, possibly the St Hippo mine, the area known as Dancing Flat (a social area in early mining times) and a rusted mine ore hopper which made quite a picture high above us and against the background of lush bush.
​
​Our lunch stop was at the sixth stream crossing, many climbing onto the large rocks in the middle of the stream to eat lunch.  Tiny waterfalls and walls of bush enclosed us.  Sadly, we couldn’t while away the day here and continued on to the final stream crossing, along a ridge and a gradual descent down to the wooden bridge at the Maratoto Road end of the walk.

Meanwhile, the slower walkers set off from the Karangehake car park, towards an old rail tunnel to do the Karangahake Historic Walkway which follows the Ohinemuri River towards Waikino.  Most walked through the tunnel and back as well.  Making a short detour along the way to admire the Owharoa Falls, they walked through the Victoria Battery to a welcome lunch stop at the Waikino Train Station to be picked up by the bus which then went on to pick up the other walkers at Maratoto.​ 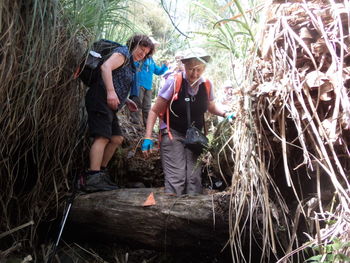 A tricky spot , negotiating a way over a fallen tree.
​After the two groups met up we set off back to Paeroa for a well-deserved rest and refreshment at The Refinery Café.  The building this café occupies was built in 1912 by the National Bank of NZ to refine bullion from local mines. Back on the bus at 3.30 p.m. we headed back to Auckland, well satisfied with a great day's walking and the opportunity to appreciate both New Zealand History and its natural beauty too..
A huge Thank You to Molly and to helpers John, Janet and Wendy.
​Text:  Molly and Wendy; photos Dhammika.