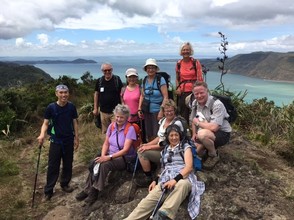 The view made the climb worth it!
This trip in the words of some of our club members:
“I felt I have experienced many challenges in this one walk.  Balancing my body to cross the four streams, climbing rocks, and how to use the chain to climb the mountain and down the hill.  There were many good experiences in this walk”

“Mentally and physically challenging”
​
“The accessibility of the Waitakeres to we Aucklanders is priceless.  To me there is nowhere like it in the world”
​ 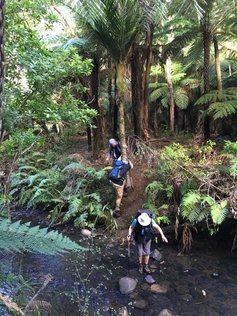 Crossing the Whatipu Stream
We were a group of just 21 because only a small bus can negotiate the narrow, windy road down to Whatipu.   Half of us chose to do the full-on walk taking in the Kura Track uphill from the Whatipu carpark,  then returning via the arduous  three hour Omanawanui Track with its serious hills.  There were a few interesting finds - a rare treat was seeing a giant kauri snail shell, also the vibrant purple berries of Dianella Nigra and the velvety wood ear fungi growing on dead branches.
The rest of us started out by climbing up to the Donald McLean lookout to soak in the 360 degree views.   Heading back down from here we took the Puriri Ridge Track then the Kura Track through lovely bush to Whatipu.   This was pretty much all downhill although still several challenging rough patches to negotiate, lots of tree roots and the odd rocky slope.   We all enjoyed picking our way across the Whatipu Stream several times, finding the cool water refreshing and a chance to wash the mud off our boots.  There’s something satisfying about water sloshing about in your boots on a hot day!
​It was great to see several enthusiatic groups of college students working towards the Duke of Edinburgh Award, dwarfed by heavy packs and powering along the tracks on legs younger and fitter than ours!!  They must have learnt that on these tracks you need to keep moving faster than the pesky mosquitos.
At the end there was just enough time for some to wander along the beach and admire the rocky cliffs of Paratutai Island and the remains of the old wooden wharf there.     It was a quiet drive back to Auckland, everyone tired but happy, and ready for the next walk in two weeks time.

Many thanks to Don and Anne, leaders today, for a great, challenging walk.
Photos: Katherine, Kevin, Bev.  Text: Sharleen 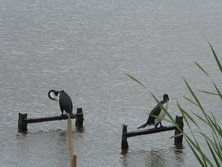 ​It was a warm day already when we set off early for Huntly, to walk the 4.6 km around Lake Hakanoa.
A hidden gem in Waikato, the lake is home to several pied shags, ducks and Canada geese.  Unfortunately the geese have not trained  themselves to avoid using the path around the lake as a toilet!
​​​ 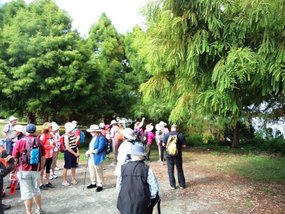 We stopped to look at the Swamp Cypresses, some full of cones.
In spite of that, it was a most enjoyable walk around the perimeter of the lake, where we saw oak trees and European beeches, as well as kahikateas and Griselinia littoralis.
​The area with plants from different countries was fascinating and we came across the Japanese Yew for the first (but not the last!) time that day.  The New Zealand section has an impressive array of Pseudopanaxes!  However, it was the Swamp Cypress (Taxodium distichum) that was "Tree of the Day."   We won’t easily forget what their cones, or indeed their “knobbly knees” look like, either.  The "knees" are pneumaophores, or breathing roots that help the tree absorb enough oxygen, which is in short supply in these boggy soils.

​Our main destination for the day was the award-winning Hamilton Gardens. Reclaimed from a wasteland in the last forty years, there are Productive Gardens, Fantasy Gardens and many more here.   After a quick (and early) lunch we did a short loop walk on the Bussaco Track and were glad of the shade afforded by the bush.  Alas, it was all too short lived and we were soon back in the open area by the information centre.  We then dispersed in small groups to wander through the themed gardens.
​
These have been recently developed and some are not yet ready to be exhibited to the public.  There were English Flower Gardens, Japanese, Indian and Chinese Gardens, as well as a Tudor garden full of symbolism and Italian Renaissance Gardens, all capturing the essence of each culture.  In addition, there was a Kitchen Garden, Herb garden and a Sustainable Backyard Garden.
By the time we had covered all this we were hot and thirsty, so ice creams from the excellent café were an imperative, not that the heat stopped some of us from having our coffee fix either!  Finally, most of us had a brisk walk around the lake (more Swamp Cypress there!) before hopping back on the bus.  Forty eight people (including many guests) who were booked on this trip had a thoroughly enjoyable day!
Thanks to Sharleen and Praemi who were leaders for the day and to Sue for sharing her photos with us all.
​(See the Photo Gallery for Sue's photograph of the Italian Renaissance Gardens) 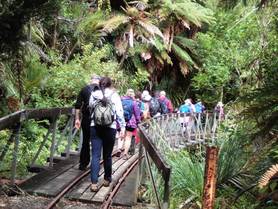 On the Tramline Track
A cheery bus load of intrepid walkers set out last Sunday bound for the Waitakeres despite the daunting weather conditions. Questions started to arise as to whether we would be able to proceed as intended as the rain bucketed down. Remarkably, as we neared our destination the weather improved and spirits lifted.

Our bus parked on Scenic Drive and we took the short climb from there up to  Pukematekeo Lookout 336m. Despite the strong wind and cloudy conditions we could still admire the fabulous view over the city and behind us the Waitakere Reservoir and water fall. Then it was back to Scenic Drive again to  set out for the Anderson Track. Once on this route we noted the site of  the  Anderson homestead and then stopped further along for morning tea.

From this point we divided into two groups. The A walkers headed for the Waitakere Dam by continuing on the Anderson Track and then taking the West Tunnel Mouth Track and the Tramline Walk.  Of interest while crossing the dam was the attractive Dracophyllum latifolium, commonly known as the Grass Tree. The suggestion that we have lunch just before the start of the next track was well received. Later, much revived we tackled the left fork of the Fence Line Track which  led us to Simla and the well sign posted  Montana  Track.  Despite mutters about tree roots and mud and the “is it far now” refrain, we finally linked up with the Auckland City Walk, satisfied to have completed a more challenging walk than usual. Unfortunately this was when a downpour hit us and suddenly those heavy feet were picked up smartly and a dash for the bus parked just down the road was made.

The B group’s route included returning to Scenic Drive from the Anderson Track and then taking in the Waitakere Dam Walk, some of the Tramline Track and then the right fork of the Fenceline Track which led back the the Auckland City Walk and the bus.

The wonderful Waitakere Ranges offer much for walkers to see. We especially enjoyed seeing matai, kauri, ferns and wild orchids. Another great day out walking.

Thank you to Fiona and Marilyn for leading this walk, our first and a good start to the year!