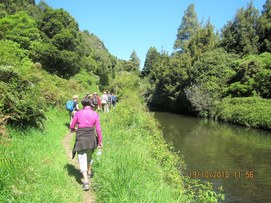 ​Friday
Thirty five of us became  tourists in our own country for a weekend exploring some of the amazing underground wonders of Waitomo.    And we found it's not just about the glowworms!

But first we had to get there,  and everyone enjoyed the drive south through the fertile, green farmland of the Waikato before arriving
​ at the small town of Te Kuiti for our first walk.   Lunch at the Mangaokewa Reserve fuelled us up to walk part of the Te Araroa Trail, over the suspension bridge and alongside the Mangaokewa Stream.

​A very pretty walk through virgin bush, predominantly tawa, but also matai, rimu and kahikatea.  Track improvements and predator control has been done by volunteers through Project Manu and North Island robins have been released into the area.   A side trip to the Cascade Falls was worth the climb and what a great spot for selfies!

​
​​Heading back north again, we made a short stop in Te Kuiti to enjoy some of this little town’s interesting attractions.  The home of the late Sir Colin Meads, All Black great, and David Fagan, world champion shearer, Te Kuiti was once a railway town but now promotes itself as the “Shearing Capital” of the world.   Hard to miss the giant shearer statue at the end of the main street!  Seven metres high and weighing 7.5 tonnes.

​
Likewise the bronze statue of  "Pinetree" Meads and his story told on a series of display boards in the main street.

Being a natural history club we had to find the endangered giant weta and the long-tailed bat sculptures as well.   Both creatures are found in the local area.

Some of us also spent a few quiet moments in the serene, contemplative Tatsumo Japanese garden featuring both Japanese and New Zealand natives.
A fleeting visit to a small town with a lot to offer. 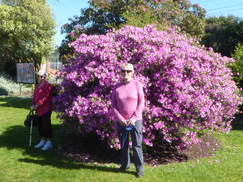 Fiona blending in at the lovely garden at Roselands

​​Twenty minutes later we were settling into our Otorohanga motel and looking forward to a buffet BBQ dinner at Roselands Restaurant in nearby Waitomo village.  What a beautiful rural garden setting, rhododendrons and cherry trees bursting with colour and some delicious food awaited us. 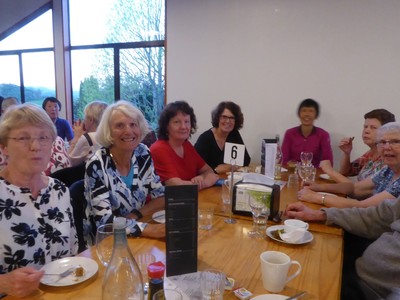 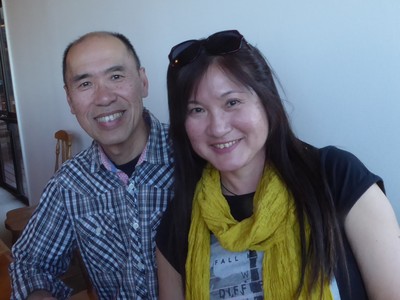 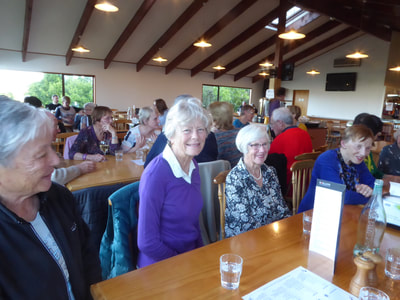 10 out of 10 to our driver, Peter, for managing to back his 50 seater bus into the motel carpark on a busy highway at 4.30 on a Friday afternoon.   Especially as over half the parking/turnaround area had been swallowed up by construction work since we were last there!    Good work Derek “flagman” also for stopping the traffic to help Peter manoeuvre.
Saturday
Our early morning visit to Waitomo Glowworm Caves and the smaller Aranui Cave (before the hordes of real tourists arrived) was all we expected and more. 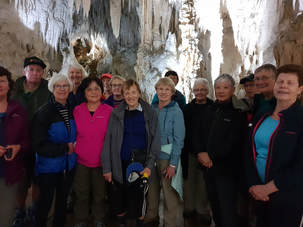 A few of us underground in Aranui Cave
Our friendly and welcoming guides impressed us with their knowledge and obvious love and respect for this fragile underground environment.   The memory of Marlon, our guide, singing in Maori, his voice rising in the darkness to the roof of the “cathedral”,  will stay with many of us a long time, as will the silent boat ride through the inky waters.

Twinkling down at us were the lights of thousands of glowworms (they are actually gnat larvae but that doesn’t sound half as magical!)     We learnt the lifecycle of the glowworm, marvelled at the stalagmites and stalagtites and eventually emerged into daylight again delighted by it all.   ​
​ 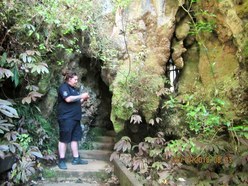 Aranui Cave entrance is well hidden
No time to dawdle about in the inevitable gift shop, we needed to be back on our bus to drive a short way for our visit to the second cave, Aranui.  Split into two groups due to the smaller size of this cave, we were again escorted into another subterranean world.

Aranui Cave is about getting really close to the formations and the variety of colours.   It’s a more intimate experience but no glowworms.  Who will forget the guide switching off the already subtle lighting so we could truly “feel” the total darkness.

Bonus – photos are allowed in Aranui and although you might see a cave weta, we didn’t!

Back at Waitomo Village for lunch, welcome coffee and a quick look through the excellent museum in the i-site building.  Well worth spending longer had we known it was so good.    ​

​   Marokopa Falls was next on our list of places to explore.

​
​At 43m high, and often described as the most beautiful in New Zealand, the falls are a short 10 minute walk down a gravel path fringed by lush parataniwha and nikau.  From the viewing platform the cooling mist from the waterfall reached our faces, this is a rewarding stop and so worth the gentle ascent back up to the road.

Another “can this rather large bus park here?” moment at our next stop –            Piripiri Cave.  No  torch – no walk for this one. It was a good climb up to the cave entrance then a steep descent into it.  No helpful lighting but a very helpful handrail!   A great little cave to know about, fascinating limestone rock formations and native bush, just a 20 minute walk – and free! 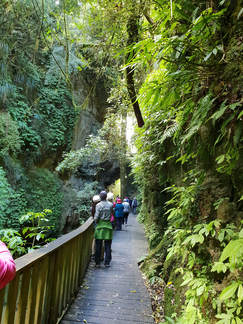 ​​Last walk for the day was at the Mangapohue Natural Bridge, and another WOW moment here.

The path follows the Mangapohue Stream through a limestone gorge to the 17 metre arch,  the last remains of another ancient cave.    Easy walking with boardwalks and finally a climb up a wooden staircase to a lookout.  The route emerges onto farmland studded with limestone outcrops and we spent some time just “being there” in the warm sunshine before retracing our steps.
​Back at our motel late afternoon, there was time for informal happy hour time before dinner at the Otorohanga Club/RSA. 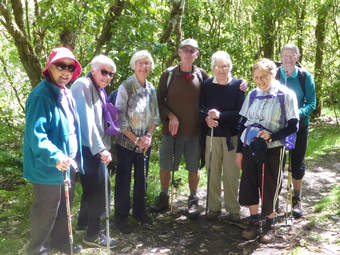 ​An 8.30 start this morning after careful loading of the bus with our assorted luggage.   We’d left the best till last with the Ruakuri bush walk which begins and ends at the Ruakuri Reserve near Aranui cave.

Such a thrill that our small group of B walkers took on the challenge of this amazing walk and did it at a leisurely pace with time to spot orchids, ferns and lichen amongst the variety of rock formations, tunnels and caves.
​ Lots of steps to manage as well and they did it with the help of Janet and Derek.  A figure eight loop walk with paths going off here and there confusingly, we worked out if we turned left everywhere, we wouldn’t go around in circles!
​ 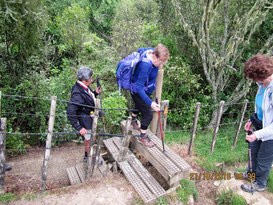 State-of-the-art stiles were appreciated
Meanwhile the A group set off on the Waitomo Walkway.

​This was a pleasant route through bush and farmland with many karst formations.  It was a relief to find the ground dry underfoot, a far cry from the mud we’d traipsed through during our recce back in July -  and the bulls just watched us from a nearby hillside and the cows politely ambled out of our way!

This walkway adjoins the Ruakuri bush loop so we completed this one as well, finishing it just as a group of black water rafters came dripping from the underground river at the end of their adventure. 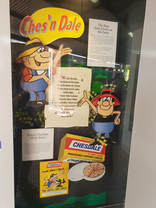 Leaving Waitomo we drove back to Otorohanga for lunch, coffee and a wander down memory lane in the Ed Hillary walkway in the main street.

This is an architecturally designed kiwiana arcade lined with display boxes and poster panels featuring NZs  popular culture, heroes, icons and heritage.  Audio buttons went into action and we had the haka competing with the chesdale cheese song www.kiwianatown.co.nz        A fun way for those of us not born in NZ to learn a lot in a short time.

Standing opposite are the twin Maori carved pou, a tribute to the ancestors of the local Maniapoto people and very impressive. 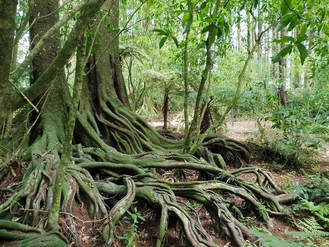 Incredible kahikatea roots
The journey back to Auckland was broken just past Te Awamutu where we turned off the highway to walk in Yarndleys Bush – an “island” of kahikatea dominant remnant swamp forest.    A boardwalk winds through the forest protecting the monstrous buttress roots and from the top of the viewing tower we had a bird’s eye view of the forest.

​ Interpretative signs along the way informed about the trees, both kahikatea (NZs tallest tree) and pukatea, and the history of the land.  A gem of a place to visit, so accessible, ideal to take the grandchildren!
We squeezed in an icecream stop at Mercer for those of us addicted and were back at Greenlane by 4.30pm,  having happily avoided the holiday traffic jams.

Big thanks to organisers, Derek and Sharleen, and helpers Gail and Janet.   Thanks also to driver, Peter, for his helpfulness.
Someone said “these weekends just get better and better”