24 April 2022 - Cornwall Park
In 1853, John Logan Campbell was a land speculator and he purchased a superb 1000 acre suburban farm which he renamed One Tree Hill.  In 1901, now aged 83, he was persuaded to serve as honorary mayor of Auckland to welcome the Duke and Duchess of Cornwall and of York to New Zealand.  He took the opportunity of the heir apparent's tour to gift 230 acres of One Tree Hill to New Zealand, renaming it Cornwall Park.

​It is one of Auckland's loveliest parks and certainly one of its biggest - now over 425 acres in total.

Our group met outside the Observatory on an overcast and windy morning to explore as much of the area as we could.

​First stop was the park’s Olive Grove containing the remnants of 5,000 European olive trees planted by Sir John in the 1870’s in the hope of producing a viable olive oil crop.  Unfortunately the trees were unproductive but a number of gnarly old trees still remain.

Beyond the Olive Grove is the Cornwall Park Cricket Club and this area was a highly productive market garden in the 1890’s run by Fong Ming Quong who supplied green vegetables to Auckland.

Huia Lodge and Acacia Cottage
​We walked past the Queen Anne revival style Huia Lodge built in 1903 and Acacia Cottage, Auckland’s oldest surviving kauri building moved to the Park in 1921 from Auckland’s CBD, to the Memorial Steps constructed in 1956 from local volcanic basalt rock where we had morning tea.
​Revived by snacks and drinks Linda gave us our next task to locate and identify 9 different trees.  Pohutukawa and puriri were relatively easy but titoki and horse chestnut needed a bit more searching.    Great fun though and beautiful old trees with wonderful canopies and trunks.   A statue of Sir John Logan Campbell sculpted by Shona Lyon is in this area too. 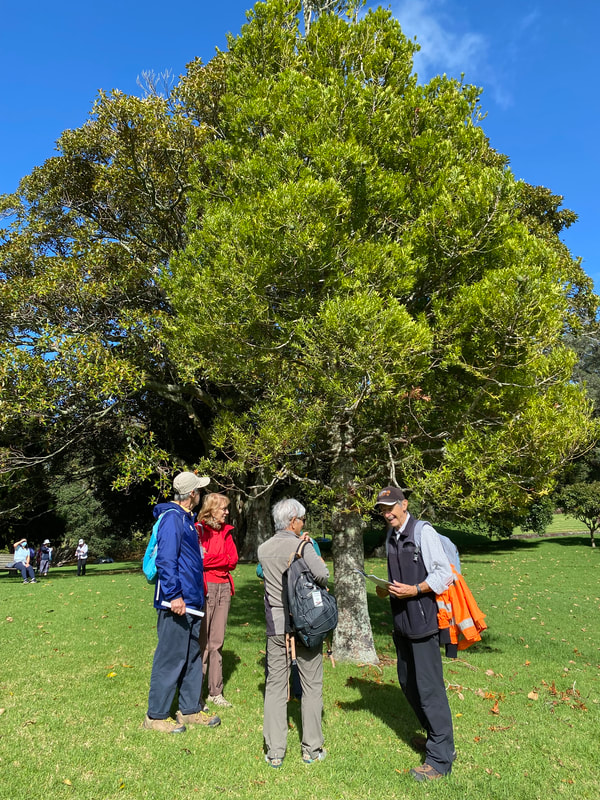 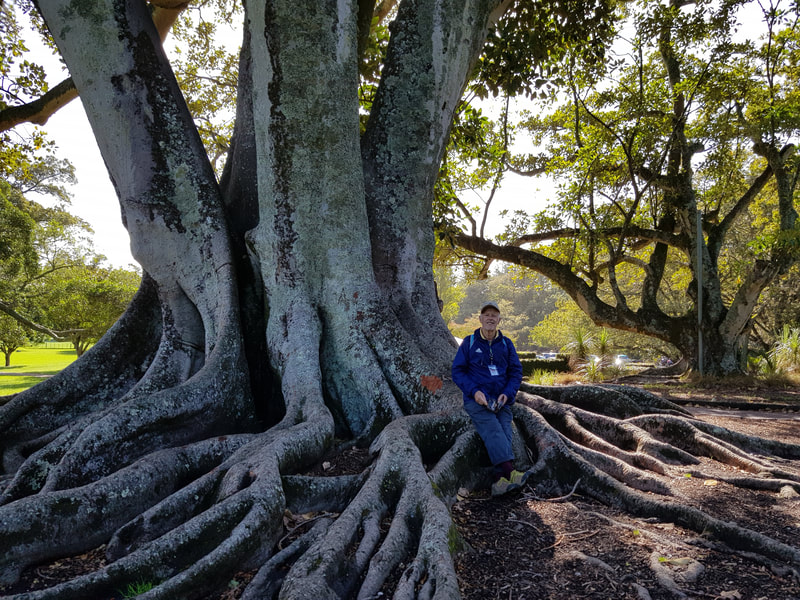 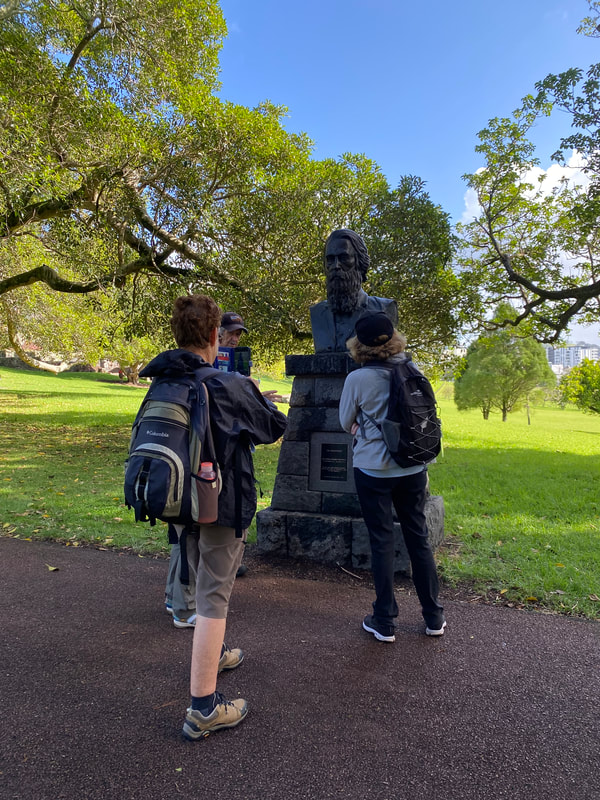 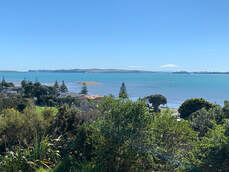 As we drove downhill to our meeting point at Mellons Bay beach we were greeted by a magnificent view across the water to Rangitoto.

Twenty of us assembled on a beautiful autumn morning for today’s adventure. 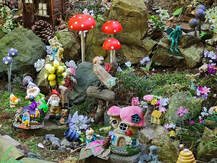 MacDonald Walkway and McLeay Reserve
Our walk started on the MacDonald Walkway, which runs beside a stream, through regenerating bush. The bush includes an impressive stand of young kauri and numerous native plants, with glimpses of a variety of houses and gardens, including an enchanting fairy garden.

​We passed duck ponds which had been excavated to catch sediment before it reaches the beach. The path continued into McLeay Reserve, which borders the stream gully. Along the path were numerous native trees, including cabbage trees, kawakawa, karaka, kowhai, mahoe, nikau palms, puriri, sedges, and tree ferns.  The walk rose steeply through bush.
​Murvale Reserve
We proceeded to Murvale Reserve, and followed a path through native and exotic trees. These were generally more mature trees, with some very tall specimens. Trees included a large stand of oak, and a particularly tall and wide macracarpa. We paused at a large grass clearing for morning tea.
​
McLeans Reserve
Next to McLeans Reserve, with its impressive sea views. First we headed to the flying fox, which was tested by several enthusiastic members.
We then walked through regenerating bush and across fields to a lookout, which provides magnificent coastal and estuary views. From here we descended to Eastern Beach, and walked to the reserve at the southern end of the beach, where we stopped for lunch. Most of us appreciated the shade provided by the overhanging pohutukawa trees.
​
Return to Mellons Bay
Then it was onwards and upwards, with a brief stop at Bleakhouse Road Promontory Reserve, and a historic house, then down a steep incline to Mellons Bay.
​
Thanks to our leaders, Lawrie and Viv, also to helpers Gilbert and Jenny.
Text: Viv
Photos: Linda, Viv 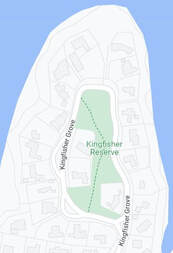 Thoughtful Developers!
​
​A perfect day for walking with a slight touch of Autumn in the air as 35 of us set off in two groups from the car park at Wainoni South Park, Greenhithe.  A cricket match was on as we crossed the path towards the children’s playground and over Churchouse Road and down a gravel driveway to a small pumping station.  From there it was up a flight of stairs to climb a path through a field, watched by curious sheep and chickens in the neighbouring property.

When we reached Roland Road we carried on down Kingfisher Grove, a very pleasant residential area, round a loop and through a small reserve with mature totaras and various exotic trees. 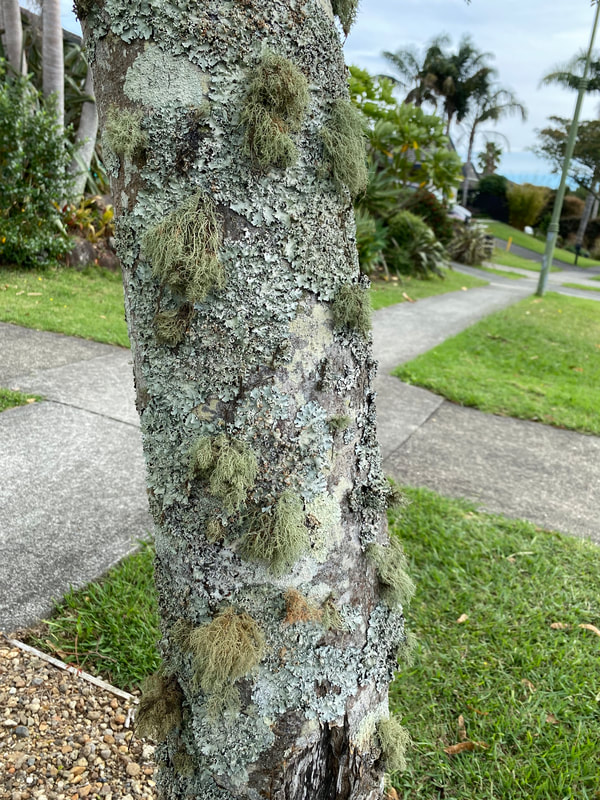 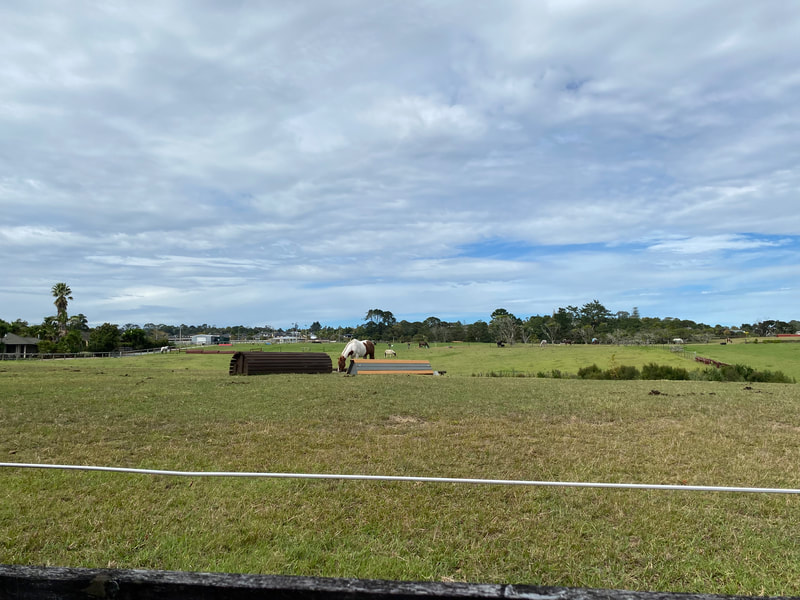 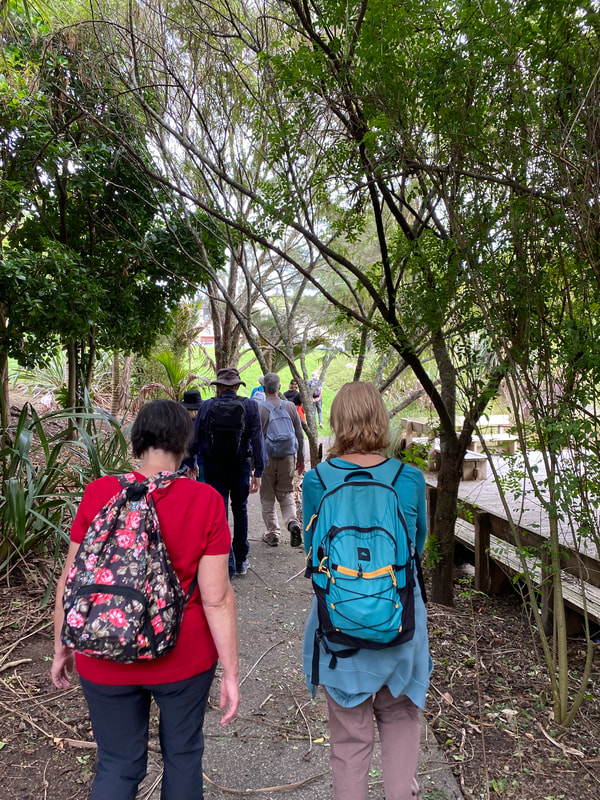 Continuing on we came to another walkway in secondary bush which led to a very old grove of lichen-covered orchard trees.  We exited to Rame Rd and into a reserve and followed the track back to exit to Greenhithe Rd.

We crossed the road into Collins Park for morning tea by another children’s playground.  Some walkers went down to the local café for their morning coffee.  It was then a steady pull up Greenhithe Road and along a gravel path between horse paddocks back to the car park.