​
We began the day with a visit to the Crown Lynn Museum, Te Toi Uku, located beside the historic downdraft Gardner kiln.
Many of us took a trip down memory lane when we viewed the displays of Crown Lynn china.
The highlight of our visit was the talk by the Curator, Finn McCahon –Jones,  who kept us enthralled
with information on the origins and history of the brickmaking industry and the development of Crown Lynn Potteries.
​
During our stroll through several historic areas we had a special mid winter morning tea to celebrate another successful six months of programmed walks. We walked through New Lynn, admiring the many public art works, crossing the striking Rewarewa Bridge and continuing around the Whau Walkway to Riversdale Park, Avondale.

Te Atatu Peninsula -  what a fabulous walk.   For a start it is flat which will appeal to a lot of people but also it is a lovely gravel track interspersed with boardwalks, bridges, beach and pavement past lovely looking homes.    The views  across the Waitemata Harbour are terrific throughout most of the walk,  firstly out to West Harbour, Birkdale, Birkenhead, Chelsea and finally the city,  which is quite a different view to one we normally have.  It looked gorgeous.    We saw the remains of petrified forest and spotted basket fungi growing under the trees and finally we passed through the regenerated wetland area which was interesting too.
Text: Margaret and Anne

​A big thank you to Margaret and Anne for an excellent walk. 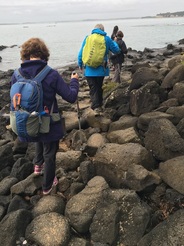 Picking our way over the rocks

​It was a fine and sunny day for 29 members to enjoy an interesting and "learning experience"  loop walk on Auckland's North Shore.   Following the rocky coastline from Milford to Takapuna we took in the 100,000 year old fossil forest that can be seen from the waterline at low tide.  This is New Zealand's only example of a fossil forest.    Algies Castle with its walls over-hanging the sea and the Giant's Chair add a quirky touch to the route.    The castle was built in 1926 by the eccentric Scotsman, John Algie.   A walk along Takapuna beach  took us out to the main road where we looked round Frank Sargeson's house where he wrote and entertained many well-known New Zealand authors.
Just down the road is The Lake House which originally lived on Takapuna Beach and now serves as an arts centre.  This was a good place to have a relaxing lunch, buy coffee and look at the art works on display.  From here we visited St Josephs School which dates back to 1849. It was the first school on the North Shore and was later used to house orphaned and destitute boys.  We then went up to Lake Pupuke,  a fresh water lake occupying an ancient volcanic crater;  it was used as a water supply for the North Shore from 1894 when a pump house was built -  now used as a theatre.  After a stroll by the lake we finished our walk along Hurstmere Road with its many historic houses of interest built by the affluent early settlers, and some of the impressive trees they planted.
Thank you to Shirley and Fiona for putting together this interesting walk.

Brooding skies over the Kaipara Harbour. View from the top!
​
With the outlook of unpleasant weather conditions for the rest of the day, 22 keen walkers travelled by bus to the start of the Mt Auckland walkway near Kaipara Harbour.

On the way, as the weather was still favourable, a brief stop was made at Omeru Reserve which was once a pa site for local iwi. It is now a lovely picnic spot surrounded by native trees including a tall kauri. There are three waterfalls providing swimming holes to cool off in the summer time.

After a short ride in the bus we were dropped off at the beginning of the track to the top of Mt Auckland. Our bus would pick us up at the other side of the walk.  We walked up the road to the site of the old airfield which had been used by top dressing planes.  A heavy shower of rain arrived and braving the conditions our group began the steady climb to the top. The shower cleared by the time we walked down the length of the old airfield. We took advantage of the clear skies and carried on upward sometimes feeling like mountain goats until we reached the beginning of the bush track.  After a well-deserved break we entered the lush bush where we saw giant puriri, kauri, nikau and rata.  Even though it was not the sunniest of days it did not alter the beauty of the bush around us.  After scrambling up steep slippery steps it was a great feeling to arrive at the lookout and see the size of the Kaipara harbour in the distance.

​Our group then followed the track going down on the steeper side of Mt Auckland.  There were a couple of difficult spots which were rather slippery and we had to watch our footwork!  Finally we all arrived safely at the end of the bush walk and then walked over farmland to the waiting bus. Everyone managed to board the bus just in time before a heavy shower of rain arrived.

We had a wonderful bunch of walkers on Sunday with everyone assisting each other through the difficult sections. One walker mentioned how they appreciated ‘the team atmosphere’ on the day. Despite the weather everyone had a great day.

Many thanks to leaders Don and Elane for a great day.

The weather gods smiled on us today and we relished the warm sun on our backs and a light refreshing breeze in our faces.  We began by following the Settlers Valley Track in Awhitu Regional Park through wetlands, along the beach and up to historic Brook Homestead.  Standing guard near the homestead for the past 100 years or so is what is thought to be the largest macrocarpa in New Zealand, a magnificent tree.  We took time to peer into the windows of the homestead and imagine what pioneer life would have been like for the Brooks back in the 1870s when they arrived on this land, building their home and the jetty where all their goods came in by boat.  ​ 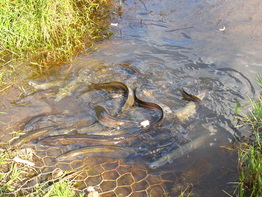 Eels, hungry and happy to smell bacon!
​​Walking further on through more wetlands and up through a lovely stand of bush, we emerged onto farmland and the lookout with panoramic views over the calm waters of the Manukau Harbour, Glenbrook's steel mill belching smoke into the air and the Sky Tower glistening in the distance.  On the final part of this loop we passed through an area where many young natives have been planted, including some very robust kauri rickers.   Native eels in the water beside the roadside put on a show for us, thrashing about in a frenzy when our leader, Derek, produced their favourite snack (bacon!).  A great opportunity to see them at close quarters.

After lunch we moved on from the regional park, stopping briefly on Brook Road to see a derelict 1952 Bristol freighter on the roadside (not an everyday sight!).  Apparently it has some original paintwork and fittings in the interior so is very useful as a reference for another Bristol freighter which is being restored at Motat.

A short visit to Matakawau Scenic Reserve revealed the sad sight of a dead kauri beside the track but many other species which are fortunately doing well.  Some who didn't want to tackle the steep steps in this reserve, walked just a short way in and then returned the same way, pausing to pull out the odd pesky asparagus fern and wandering jew trying to make a home there. 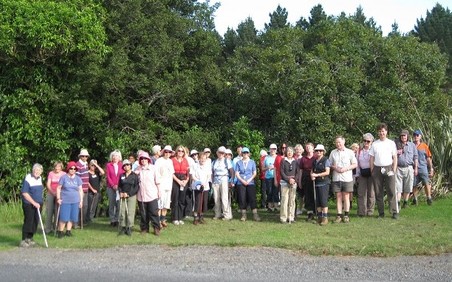 The group about to enter Matakawau Scenic Reserve
Our last stop was Waiuku and some free time to explore the Tamakae Reserve with its heritage buildings (including the old lock-up), a walk alongside the estuary and admire the very attractive River Lane redevelopment and landscaping.  Coffee and ice creams also featured!    Many spotted a stunning tree** with intricately patterned cones and gold Autumn foliage beside the river and wondered if it was a swamp cypress.   But we couldn't see the "knees" or pneumatophores these trees have, and after some research back home, discovered that it was probably a dawn redwood (an interesting tree which was thought to be extinct but was rediscovered in China back in 1941).

**Footnote:  08.06.16  - This tree has now been positively identified by staff at the Auckland Botanic Gardens as a swamp cypress (from its cones). When not growing very close to water they will not produce the pneumatophores we were looking for.  These two trees are often confused for each other (this makes us feel better!).

Thanks to Derek and Sharleen, our leaders for this walk.

Twenty two "A" walkers were dropped off on Scenic Drive to enjoy their day, starting off on the Cutty Grass Track.  It was obvious that anyone could become an unwitting plaything for the 1000s of darling cave wetas covering the ceiling of an old manganese mine entrance, adjacent to Cutty Grass Track.  So, the more intrepid of our 22 "A" walkers ventured inside; and others of us didn't!
Next, the Ian Wells Track tempted us with numerous opportunities for a 'free facial' but our superb mud hopping skills resulted only in lots of laughs, some lucky escapes and just one or two very muddy boots. We enjoyed the graceful stature of bright young rimu trees rising from amongst the bronze carpet of wind-strewn fern fronds.
Whilst lunching on grass aside the derelict Auxillary Nihotupu Dam, we were enchanted by a group of about a dozen Kereru that thankfully soared to safety after being flushed out of the bush by a marauding hawk.  Two, maybe older, more experienced Kereru, then swooped into action from different directions sending the hawk packing.

​After lunch we toured down into the cavernous remains of the Auxillary Nihotupu Dam It was built 1919/1921 because of concerns about delays in the construction of the Upper Nihotupu Dam.
​
​After the “A” walkers started off, the bus took the “B” group up to Spraggs Bush on Scenic Drive, a fairly short walk but with very pretty bush.  The little cemetery that you pass adds more interest too. On this loop track we saw large kauri trees,  rimu, kahikatea and miro, that often indicates a healthy bird life.  Many birds love to feed on miro berries and they excrete the seed after digesting the fruit.  This ensures that miro spreads through the bush in areas like the Waitakeres where pest control is successful.
Next, a short drive took us to the Upper Nihotupu Dam car park.  Walking up a short way along Piha Road, we headed for the auxiliary dam, which was built almost 100 years ago, but decommissioned when the main dam was built.  Walking back, we headed for the Upper Nihotupu dam and enjoyed another easy, but interesting walk, looking at ferns, a few orchids (sadly not in flower) and of course the rewarewa (Knightia excelsa) standing guard over the bush.
​When a deluge came down “out of the blue” the shelter at the top of the dam provided fortuitous cover while we had lunch.  Some went back from here (meeting the “A” group coming down to the dam) but others walked across to get a really good idea of the engineering that has withstood the test of time.  It was quite amazing and very impressive.
Thanks to John, who worked out a route on tracks that we had not tried for at least the past twenty years.
​A big thanks to the leaders Don and Anne and to Patrick who helped on the difficult recce.