​Our cunning plan to “move” Labour Weekend forward by a day and leave Auckland on Friday morning ahead of the hordes once again worked well for us.    With our considerable amount of luggage safely stowed in the lovely new 35 seater bus, and with Joe at the wheel, we were on our way to Dargaville. 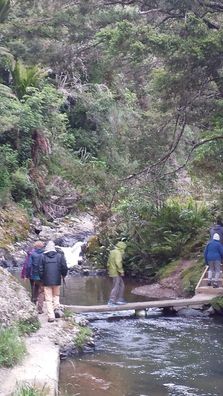 ​ A hidden gem on Gorge Road near Maungaturoto, these falls are in the Waipu Gorge Scenic Reserve.   Developed by Rotary and DOC and recently upgraded, the track descends steeply from the road on good steps, then across a stream until the falls come into view.  A very pretty picnic area and swimming spot  greeted us at the base of the falls -  the cameras were clicking and no-one was in a hurry to leave.


​Once back on the bus after this scenic break, we headed for SH12, where we made a short lunch stop at the Matakohe Kauri Museum before travelling further north to Maungaraho Rock. 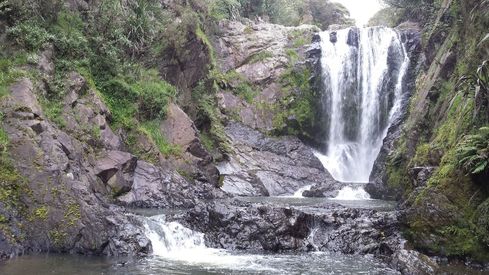 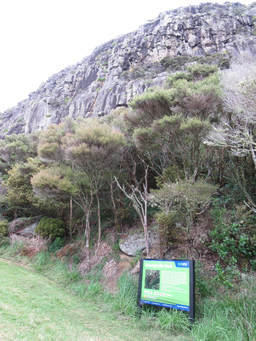 This rock in the Maungaraho Scenic Reserve dominates the landscape for miles and is the remains of a volcanic cone considered nationally significant.   Bushclad at its base with an exposed rock ridge and summit, it is a pretty dramatic sight.  The climb to the summit is not for the faint-hearted and a sign warns that it is a ropes and ladders business for experienced climbers only – needless to say we settled for the “round-the-base” track which was still a bit of a scramble in places.   Knowing that this reserve is home to several endangered/ critical/at risk plants, we were on the lookout for these.   Most of these eluded us but we did see the native carrot growing (Daucus glochidiatus).   Hebe saxicola,  which is only found in this area, and has only recently been identified, was not showing itself, possibly because it is higher up on the rocky bluff than we ventured.     The other plant we were looking for was the dwarf mistletoe, Korthalsella salicornioides which grows on manuka and kanuka.    Thanks Praemi for printing off pictures and information about these plants to give us the best chance of spotting them.

When we recced this walk several months ago, there was a rock fall over the track which made life difficult.  A quick email to the Kaipara District Council letting them know about it  (thanks Molly), and their very positive response resulted in a clear track for us.  As well we noticed that the signage along the track had been replaced.   (Walkers LOVE good signs!!)    Well done Kaipara District Council.

​The bus rolled up to our motel in Dargaville at 4.30pm, leaving us plenty of time to check ourselves in, enjoy our first Happy Hour of the weekend and be ready for dinner at 6.30pm.   The local RSA was our dinner destination and we were impressed with the imaginative variety of hot dishes and attractive salads prepared by Kim.  ​

​A busy day was planned and even though our 8 a.m. early start had met with a collective moan from the group when advised the day before, everyone made it to the bus on time and eager for the day’s adventures. 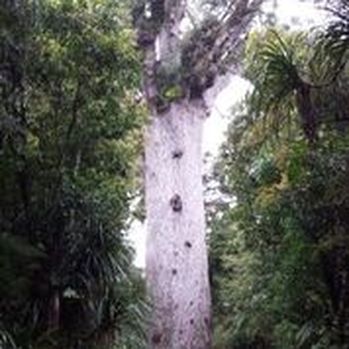 We were insignificant dots compared to the "Lord of the Forest."


​Heading north from Dargaville our first stop was at Waipoua Forest to see the mighty kauri tree  “Tane Mahuta” (Lord of the Forest).  The incredible size of this tree never fails to impress, it’s age is estimated to be between 1,250 and 2,500 years old.  Kauri die-back is a problem even in Waipoua Forest, as we saw, driving along the main road.  The state of the art boot/ shoe spraying station at the approach to Tane Mahuta signifies the importance of this tree to any New Zealander who has ever seen its majesty.
​Back on the bus we continued north to the  town of Opononi for our morning tea stop.  Situated on the edge of the Hokianga Harbour, we were afforded stunning views across the water to the sand dunes at North Head, and while sipping our coffee we took time to admire a wall of murals painted by local artist Bev Cox.  Titled “A Taste of History” these murals depict the history of the Hokianga, spanning the arrival of the early Maori, through to the present day.
​
​​Heading inland our next stop was the Wairere Boulders, also our lunch stop and the highlight of the day.  The park created by Rita and Felix Schaad between 1999 and 2003 is one of the best examples of lapiez weathered surfaces (karstose) on basalt.
​the scenery is unique and well worth the drive to see it. Felix (an engineer by trade) and Rita have created a two hour walk up, over, under and between these enormous boulders which fill the valley.  Care was needed on the walks as our tallest walker found out when head and rock connected, and the rock won.  Those of us carrying club first aid kit put the contents to good use.

​
Arriving back in Dargaville, and after some difficulty finding the correct door for medical help at the hospital we delivered our wounded friend for a professional check-up and care.  Cleaned up and rebandaged he was sent on his way with a clean bill of health.

​Our return to the Parkview Motel was later than usual so a vote was taken whether to have happy hour or just take our drinks along with us to the   BYO dinner location.  The latter option won the vote which gave us all time to relax with a cuppa or a beverage of choice in our units, put our feet up and watch the news.

​Back on the bus at 7.15 p.m. we drove to the New Asian, Chinese Restaurant.  Greeted by the friendly staff our hungry group enjoyed a delicious buffet dinner.
After the long day especially for Joe our very patient and reliable driver, we were all happy to return to the motel for a good night’s sleep.
​

After Joe packed our luggage into the bus in his usual methodical way, with help from John, we headed for the Baylys Beach Clifftop Walkway, well known to the locals.

While most of us climbed up to the walkway with its great views, others walked on the beach to meet the main group.  Returning together to the bus along the beach we saw what seemed to be an injured or abandoned young seal stranded on the sand.  Further on we could clearly see examples of petrification in progress:  there were a number of tree roots and stumps already turned into lignite, embedded in the rocks. 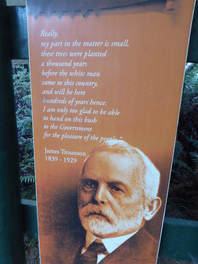 Noble sentiment expressed by the founder of the Park.

There are many native trees here in addition to kauri: miro, kohekohe,
taraire, kahikatea and even a large white Maire (Nestegis lanceolata)
​           among others.
It was encouraging to see much new growth occurring, many young miro plants and some juvenile seven finger (Schleflera digitate) even though we did not recognise the latter straightaway.  This is yet another species with the trick common to so many New Zealand plants:  the juvenile form shows a different morphology to the adult, fooling us poor humans and many animals too, no doubt.
​The sad part of this walk was seeing a number of large kauri trees affected by kauri dieback disease.  Some had large parts of their bark stripped off, others showed signs that all was not well, some even with bracket fungi growing along the trunk.  We also found “a weta hotel” which cheered some and horrified others! 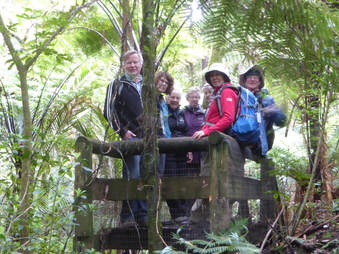 Beside the bole of a fallen kauri.
​Going on to Maungaturoto, we were glad to be able to have lunch under cover when we gravitated towards the cafes for cups of coffee.  Fortified with food and drink we ambled through the small but interesting Nikau grove nearby, where we also found Puriri, Kohekohe, and Karaka.  It was good to stretch our legs before the ride back to Auckland, knowing there could be traffic holdups on the way down.

Our driver Joe had other ideas:  no sooner did he spot traffic as we approached Warkworth, than he was off on side roads to get past the queues.  Apparently this was a short cut known only to the locals and Joe claimed he would have to shoot us all now that we had learnt their secret!  But we did all get home safely – and in good time too.

A big thank you to Sharleen and Molly who organised the entire weekend!
Thank you also to all the others who helped our "injured soldier,"did head counts and performed all those myriad tasks that meant we all had a safe and enjoyable weekend.