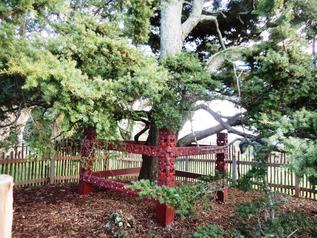 Totara planted by Princess Te Puea Herangi and restored carvings
It is always a treat to have our history buff and botanical expert, Des, lead a walk so we were looking forward to this walk very much.   (And of course we were keen to sample Wendy’s homemade date scones for a special morning tea to mark the end of our Summer-Autumn walking programme).
After meeting on the steps of Auckland Museum in the Domain, the group started out through the Domain stopping at several interesting sites en route.   There was the group of American holly trees planted by  United States Vice-President Richard Nixon during his 1953 visit to Auckland, the silk floss tree (Ceiba speciosa, or monkey-no-climb because of its thorny trunk),  and the ornamental pond located near the entrance to  the two glasshouses which was built for the Industrial Exhibition of 1913.  Profit from the exhibition was used to build both the temperate and tropical houses.   We stopped to note the Auckland Regiment memorial cairn constructed of stones from Anzac Cove in Gallipoli.   Then it was uphill to the sacred tōtara tree planted on the first centenary of the Treaty of Waitangi signing in 1940 by Kingitanga leader Princess Te Puea Herangi, the great granddaughter of Pōtatau Te Wherowhero – the first Māori King.  Carved ancestral guardians have just been restored to the site and we just missed the ceremony to celebrate this by one day! 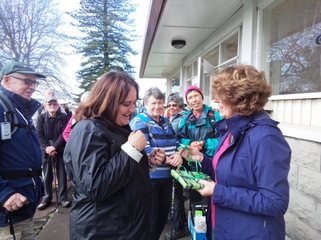 A little something to help Meredith remember her walks with us
​


​At the Domain gates Des pointed out the nude sculpture of 1930 Olympian Allen Elliott for us to admire!   Next stop was Outhwaite Park where we enjoyed some good coffee and scones and also took the opportunity to say good bye to Meredith who is heading back to Australia to live after joining us on lots of walks over the past couple of years. 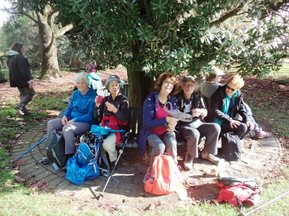 Lunch stop
It was a pleasant route from Outhwaite Park , over Grafton Bridge and into Symonds Street Cemetery.   Many of us had never been here before and had little idea of the history of the cemetery and Grafton Bridge above it, nor what a fascinating and picturesque place it is to wander in.  Well maintained pathways and trails wind through mossy, crumbling graves, and beautiful bush,  in what is now an historic places site.   Established back in 1841, the cemetery  has several quarters including Anglican, Catholic, Jewish and other denominations.  In 1966 around four thousand graves were dug up to make way for the new motorway.   There is a moving wall of remembrance with the names of those whose graves were removed.  The cemetery’s most famous resident is Governor William Hobson, the first Governor of New Zealand and signatory to the Treaty of Waitangi.    We followed the Hobson Walk and paused by several notable graves while Des told us the stories of people like Edward Costley, Sir Logan Campbell’s young daughter and the teenager Emily Keeling who was shot on her way to Bible study back in 1886 by a jealous  ex-boyfriend.  We also found the grave of Elizabeth and John Goldsworthy, whose story is a saga of early colonial life in New Zealand.  Elizabeth is reported as having challenged the Maori war party as they stole the thatched roof of her cottage to make a whare,  clothes from her clothes line and all her geese while her husband was away! 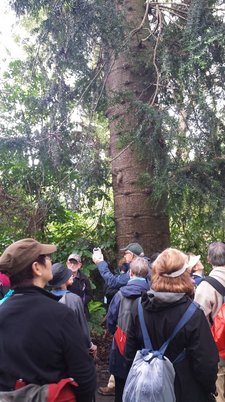 Cameras out to capture the dramatic bunya pine


​The park on the corner of Karangahape Road and Symonds Street was perfect for lunch – surprisingly, enough seats for everyone.  Before moving off we had a quick look at the small Jewish cemetery and the Nathan family grave in particular.   On our way back to the Domain we detoured down Whitaker Place to see the Cintra apartments which were ground breaking architecturally back in the 1930s and featured in the first issue of the magazine which is now House and Garden.  Again Des filled in all the details for us.   How many interesting places there are in Auckland that we didn’t know about!!   Another “first” for many of us was to walk part of the “pink cycleway” and enjoy the landscaping.   We also had a good view of the ropeworks sculpture suspended from the Wellesley Street bridge.  By artist Caroline Robinson, it is a tribute to some of the early colonial industry from the Grafton area.   Something else some of us had never noticed before.

Wending our way back up the lovely paths in the Domain we could admire some of the more unusual trees, the Bunya pine in particular capturing our imagination.    Just as the rain set in we emerged from the trees back at our starting place.

Many thanks to Des for leading this walk and Wendy for organising a lovely morning tea.
Text: Sharleen  Photos: Sue, Dhammika and Sharleen 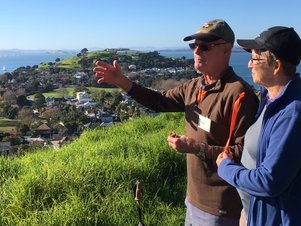 Leaders Derek and Gail
With clear blue skies and the Waitemata Harbour sparkling in the sun, we couldn't have asked for a better day for this walk around historic Devonport.  Twenty five of us set off from near the ferry building, our route taking us past several significent memorials and features.  First the flagstaff in Windsor Reserve which was moved from Mt Victoria, then the arch which commemorates the coronation of Edward VII and the end of the Boer War.  Next we stopped at the memorial outside the library which honours those killed in battle from WWI through to the Vietnam war.

A quick look into the architectural award-winning Devonport Library to see Barry Brickell's well known series of tiles depicting Auckland Harbour ferries through the years, then it was on up the road to St Francis church.  The original church was the mortuary chapel for Symonds Street cemetery and was moved by barge and horses back in 1893.  The present church was built around the old wooden chapel.

Time to stretch our legs - up Mt Victoria, named after Queen Victoria, and home of Auckland's signal station back in 1841,  then Mt Cumbria.  These two scoria cones were formed around 20,000 years ago.  At Mt Cumbria we paused to acknowledge the memorial plaque for Judy Addnell, who was a committee member of our club from 1990-1991.  From here our route took us past Devonport Museum and on to Torpedo Bay. 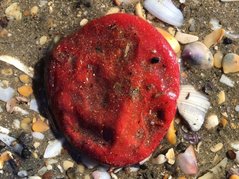 This had us scratching our heads.
At North Head, which is the most significant historical defence site in New Zealand, we learnt a lot about the threats New Zealand faced over the years, first from the Russians in the 1850s, then from the Germans in the Pacific during WWI, then the Germans and Japanese during WWII.   Derek gave us a lot of information about the various defensive weapons, including the fascinating disappearing guns, the minefield and submarine beam in the harbour.  Some of us watched an informative video as we ate  lunch and later we explored the tunnels and took a close look at one of the huge disappearing guns underground.

From North Head our route took us to Cheltenham Beach where we saw some very puzzling "blobs" on the sand which were identified by staff at the Leigh Marine Laboratory (thanks for enquiring Bev).  They appear to be sea squirts (ascidians) or sponges which have rolled about on the seabed.  See photo.  Our wanderings ended at Narrow Neck Beach.
​
Many thanks to Derek and Gail for a great walk and lots of research.
​Text: Gail and Sharleen    Photos: Praemi, Bev and Sharleen

Getting organised at the beginning of our walk

​Today 37 of us walked the original route of the Waitawheta Tramline, built in the 1920s to bring out kauri logs. This route follows the Waitawheta River as it winds its way down through the Kaimai/Mamaku Forest Park.   We followed a beautiful native bush track with a large variety of trees and ferns beside the fast flowing river, listening to the roar of the water as it pounded over the boulders.  It was obvious from the river banks that the water level had been very high in recent days due to heavy rain in the area.   The track surface was also still pretty ​muddy in parts. 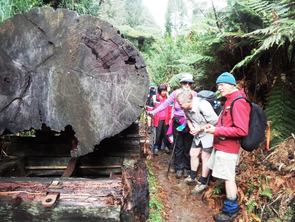 Those logs were not small!
​ The route features several interesting illustrated notice boards explaining the history of each section. On each one in the bottom right-hand corner is a short paragraph about the experiences of a young girl called Ruth  when she spent time in the bush helping her mother with meals for the bush men.​


Many walkers stopped frequently to take photos of the spectacular scenery,  a lovely vista around every corner it seemed.  Further along the track we admired the umbrella ferns covering the tall cliffs on the other side of the river before crossing the first swing bridge while the river roared on beneath our feet.    A short distance later we had the chance to examine a piece of reconstructed tramway with a large kauri log perched on two bogies allowing it to more easily negotiate tight corners, such as the Devil’s Elbow.  It was a little further on to our lunch break beside the river and the challenge of finding a comfortable rock to sit on while keeping our feet, packs and everything else out of the water.
​
After lunch everyone returned via the same track to the waiting bus with some members stopping once again to take more photos. Despite the very muddy track conditions it was an enjoyable outing for club members.

Thank you to John and Elane for a very good walk.
Text: Elane    Photos : Sue (with thanks) 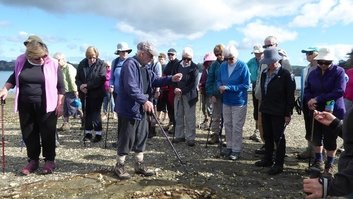 Des explaining the geology of the area
We had a beautiful day for this walk with a  bit of excitement when the bus met an oncoming car on the very narrow road down to Scotts Point.
​
We assembled outside the lovely  Scott House and Des told us a bit about the history of the area.
We then walked on to Casnell Island which is only accessible at low tide. We took in the rock formations and learned how they had formed.

Some of the group walked around the island while Des led the rest up to the top via a well hidden track.
There are some very large old trees on the island including taraire with a well fed looking kereru, also pohutakawa and kowhai.

We then drove on to Scandrett Regional Park where we had lunch and a wander on the beach and around the old farm buildings, all of which have been restored.
Next we headed on foot uphill to Mullet Point. The Maori name for this area is Purahurawai (expansive sparkling waters) and on such a beautiful day we could see why.
At the top we had a lovely view to Kawau and beyond, then it was back off downhill on the loop track to the bus and home.
Thanks to Des, Shirley and Wendy for a most enjoyable day with glorious weather!