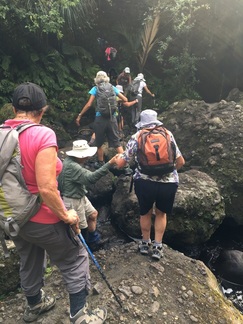 Crossing the Karamatura Stream
Another day promising to be very warm when we headed west towards the Waitakere Ranges for walks in the Huia area.  The B group were to complete the Karamatura Loop, while the A walkers were to start on this track and cross the Karamatura Stream and climb the Tom Thumb Track to view the very large kauri.  Due to track closure we were unable to complete a loop back to Huia and would need to return by re-crossing the stream.
A rope was securely attached at the top of the stream bank to make it safer and easier for everyone to descend.  This was left in place for the return journey and much appreciated coming and going.
Crossing the stream was accomplished using the large boulders and helping hands and without getting feet wet.  There was then a steady climb up a real bush track covered with tree roots.  We all found the going extremely hot and were very pleased to stop for morning tea when we reached the magnificent kauri.  This has an extremely large diameter as the trunk separates a short way from the base.  Photographs were taken from various angles but it did seem difficult to capture the full splendour of this ancient tree.
Somewhat refreshed by our rest we then climbed further up the Goat Hill Track for a promised view.  I am sure goats would have found the going easier than two-legged walkers as the track was steep and rough.  However, the view from the top was worth the climb, although, as in many cases in the bush, foliage was starting to obscure the sight lines.
Another reward for our efforts was the sight of quite a few Heketara  (Tree Daisy) shrubs, with a prolific show of the clusters of white flowers.  These were late-flowering which may be due to the later spring we have experienced, but we did appreciate seeing this and smelling the perfume.
As we headed down many of us felt the effects of the climb as legs started to tire and we looked forward to a lunch break, which our leader had suggested we have on the rocks in the stream bed.  We were very happy to stop there and enjoy our food and watch a young family spend time in the adjacent waterhole.  Some of us did wish we had brought bathing suits and could join them.
The walk back along the upper part of the Karamatura Loop seemed quite easy in comparison with the morning efforts and we stopped at the lookout to view the bush on the opposite cliffside with the various shades of green looking so attractive in the afternoon sunlight.
At the Huia Museum we met up with the B walkers who had been on an enjoyable walk and spent time in the museum.  A walkers then had an opportunity to look though this interesting space which had items relating to the timber industry in the area and the Orpheus shipwreck.
The A walkers definitely had a feeling of accomplishment for their day’s outing  and, although anticipating some aching legs to come, really appreciated experiencing a wonderful day  in this less-frequented bush area.

Thanks to Don and John for leading the walks today. 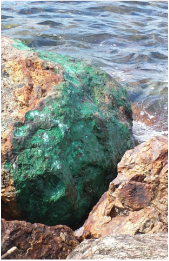 Rocks at Coppermine Bay
Twenty four keen walkers met at Sandspit wharf before a short ferry ride to Kawau Island.  The 'A' walkers were dropped off at Schoolhouse Bay and proceeded to walk up the hill to the miners' cemetery and examined the remaining headstones.   We returned to the main track and followed the uphill path that led to Miners Bay.   It was the perfect stop for morning tea and a quick swim.   Next we all returned up the hill and down again to the coppermine ruins.   This was an interesting area to explore and learn about the mining that was carried out in the 1840s.  The vivid green and blue colours on the exposed rocks was testament to the earlier copper riches.

It was a steep climb back up to the main track and then on down and up a 'goat track'  until we arrived at the lookout for lunch.  We enjoyed beautiful sea views and blue skies while we had our well-deserved break.   Keeping us company was a number of local weka pecking about in the grass.   After lunch we walked past Lady's Bay and towards Momona Point before heading down to Mansion House and its lovely grounds.   We noticed a lot of storm damage in this area.

For the rest of the afternoon we had free time to explore Mansion House and look at the magnificent trees that had been planted by Governor Grey during the time he lived on Kawau Island.   There were specimens of the evergreen holm oak, hoop pine, Chilean wine palm, Chinese windmill palm, Guadalupe palm,  bunya pine, Moreton Bay fig, queen palm, cinnamomum camphora or camphor tree, medlar,  black bamboo, ginko,  cabbage trees, Norfolk pine, bay laurel, flame tree and desert bloodwood.

The 'B' group were taken directly to Mansion House Bay wharf.  They walked by the shoreline and then followed the Coach Road to the lookout point, discussing trees along the way.   The lookout gave them a wonderful view of the coppermine chimney and surrounding bay.   After lunch in the Mansion House grounds, the group wandered through the inside of the house, admiring examples of furniture and old paintings of Governor Grey's era.  Grey was appointed Governor of New Zealand in 1845 until 1853.  In 1860 he was reappointed through until 1968.

Late afternoon the water taxi returned us safely to Sandspit wharf.  Everyone had enjoyed the day on the island.

Many thanks to Molly and Elane, our leaders and organisers for this great trip.

It was already 26 degrees when we started out on our Clevedon walks, so we knew we were in for some hard work!!  We divided into two groups:  A group who would walk the Totara Track, Puriri Track loop, a 90 min to 2 hr walk, and B group who had a different plan.    As we set off across the bridge over the Waitaia stream, we were farewelled by two kereru perched on the lower branches of a tree beside the path.     Not far up the track we paused to admire a small grove of kauri rickers, then further on a rather majestic mature kauri.     ​
​ 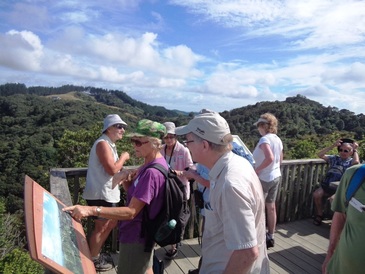 Wonderful views rewarded the 'A' walkers at the trig.
We lost count of the steps climbing up towards the trig, but it was through lovely shady bush and the reward was expansive views out across Clevedon Valley.    Coming back down was a breeze, lots of steps again, but easy walking.
Back at the beginning of both tracks, we took a short detour along the Thorps Quarry wetlands boardwalk.   The waterfall at the end of this walk was just a musical trickle of water at this time of year but cooling and soothing just the same, and a lovely secluded place with picnic tables.

​Meanwhile the B group took our time to go over the bridge, brushing and spraying our boots (against Phytophthera) as the A group had done.  We headed first for the “waterfall” but were rewarded with seeing an uncommon botanical specimen there.
Putaputaweta is normally found as a small bush growing beside bush tracks, but we found a large tree of it close to the waterfall.  We also came across a number of young matai plants, in their “untidy” intermediate state of growth: not very young any more (almost a meter high), but not having achieved the tree-shape yet either.
We then walked some way up the track the A group had taken, to see a stand of young kauri (rickers).  Further up were more mature trees.  The answer to the question “Do we want to see yet another stand of kauri trees?” was a resounding “Yes!”  So not withstanding painful knees, we went up some way before turning back and returning to Clevedon.  Waiting at the Clevedon Food Market for the A group’s return was no hardship! 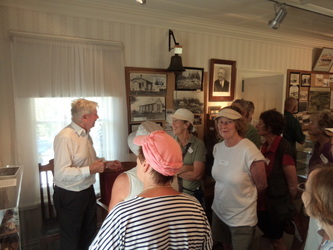 Inside the McNicol Homestead Museum
The whole group then went on to the McNicol Homestead Museum and were shown around by some of the volunteers who work there.  The curators had done a first class job with the huge number of exhibits they had and the building itself has been extremely well renovated; even the wallpaper was special: it was sourced from Wellington.  What a wonderful way to end the day!
Thank you to Sharleen and Wendy for a wonderful day out in difficult conditions. 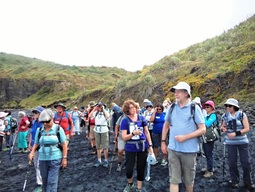 Carrying the bulky speaker to ensure we all heard what Alwyn was telling us.
It was a good start to the year, when 43 members and guests headed for Muriwai to learn about seaweed.  Dr. Alwyn Rees who joined us is an expert in Marine Biology and he started by comparing seaweed (which are algae) to land plants: they need to hold on to a substrate, have similar forms (eg cylindrical shapes: tree trunks and many algal fronds) and need nutrients, light and oxygen for photosynthesis.
​Seaweed attaches itself to rocks by means of a structure called a “holdfast:” don’t you love the descriptive names in biology? 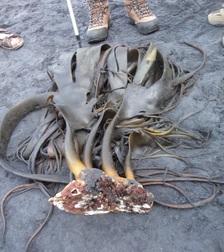 This holdfast eventually came off! Note the ribbon-like branches of this seaweed.
There are plenty of nutrients in seawater and, even though in our waters light only reaches to a depth of 50 – 60 meters, it is sufficient for photosynthesis. Algae absorb nutrients through their surface and not through the holdfast (different from land based plants, which absorb most of their nutrients through roots).  Thus seaweed is the first organism in the marine food-chain, along with phytoplankton.
Another similarity between marine and terrestrial plants is that both are affected by wind.  Just as trees trunks are divided into branches and can resist all but the strongest winds, so algae are branched to withstand the powerful waves which would otherwise tear them to shreds or pull them off the rocks.
​

Down on Maori Bay we saw many examples of different seaweed, including some large kelp which, when split open, showed the cellular structure that enables it to store air.  This makes it more buoyant and reduces the effort needed to withstand strong currents.
We also saw plenty of green algae, some algae that looked like green algae, but ware actually red algae (seaweed is complicated!) and a type of seaweed called “dead man’s fingers,” where much of the structure was buried under the sand, showing a few “fingers” sticking up out of it.  Starfish and many molluscs attached to small rocks and, of course, plenty of white- fronted terns with chicks were also evident.
​ 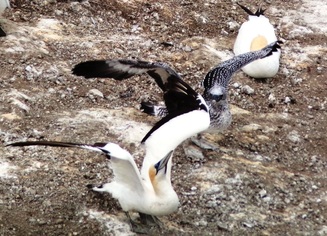 Mother gannet showing youngster how to operate its wings, to get airborne. Youngster watches keenly!
​Next, we spent time watching the gannets - a long time - and they had large plump chicks still being fed by hard-working parents, and had time to read the informative notices along the way up the track.
​Please see our Gallery for more pictures of the gannets, to see (a)how the family stays close together and (b)fighting behaviour in adults.
Working our way down to Muriwai beach, we had lunch under the welcome shade of some Norfolk Pines, then set off on a short but lovely bush track. Going further uphill through more bush, we reached a lookout.  We walked further up the track, then returned the same way to complete a good day out west.
Thank you for a good team effort to Margaret and Praemi (leaders), all those who helped on the day by looking after new members and visitors, counting heads, carrying the loudhailer and of course to our guest expert, Alwyn.