Two very interesting walks in two reserves in the Waimauku/Huapai area.   Our first walk was in the Huapai Kauri Reserve, 15ha of bush owned by the University of Auckland and used for research projects.  Before we set out into the bush we listened to part of a recorded presentation by a research climatologist which gave us an idea of what work was being done using kauri tree-ring dating and climate change data.   Negotiating some seriously muddy patches we made our way through the bush on a fairly rugged track to finally come upon the plot of land where we could see the growth measuring equipment attached to the trees and leaf litter recording apparatus.  Apparently this reserve has also been used for research into invertebrates, ants, possums, beetles and nikau palms.

It was quite a challenge to scrub our boots clean again on leaving this reserve (as already said it was seriously muddy!) but scrub we did,  the spectre of kauri dieback always in our minds. 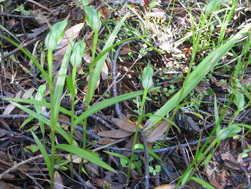 Green-hooded orchids, Kerr-Taylor Memorial Reserve
Our second walk was in the Colin Kerr-Taylor Memorial Reserve at Waimauku.  This reserve was gifted to the Forest and Bird Society back in 1993 and named in memory of Colin Kerr-Taylor who, together with his father and grandfather, fought for the preservation of this piece of native bush.  A lovely area, it contains kauri, kahikatea, totara, rimu, taraire, puriri and tanekaha; the tracks are well maintained and well signposted.  Seats here and there dedicated to members of the Kerr-Taylor family, and a family gravesite,  reminded us of the history of the land and the family who owned it for many years.  We lunched by a giant kauri before continuing on the Murray Jones track to pass possibly the largest kahikatea in the Auckland area. Two more treats - a group of green-hooded orchids were flowering profusely, always a delight to spot, as was a small family of cheeky birdsnest fungi.

Thanks to John for leading these two lovely walks and helping us all scrub our boots, as usual! 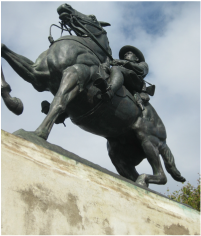 War Memorial monument Otahuhu
"For ten months in the mid-1860s, the once peaceful hills and plains of Waikato rang with battle cries and the boom of warships."  So our day was advertised and 34 walkers interested in things historical boarded the bus for this trip.

This day was about exploring some of the significant sites in New Zealand's early military history.  Des led us on a trail that meandered from Onehunga to Otahuhu and Howick then South to Pukekohe and Tuakau, Pokeno, Mercer and Rangiriri.

Our first stops were the Onehunga Blockhouse, 1860, St  James Anglican Church in Mangere Bidge, New Zealand's oldest stone church (1859) still in perfect condition and in constant use, and then the Nixon Monument in Otahuhu.  Here we had time to investigate the three memorials on this well-known and beautifully-tended corner on the Great South Road.

The next stop was Stockade Hill overlooking Howick.  History tells us that New Zealand's first Christmas tree was erected here in 1863 by some Bavarian soldiers from Puhoi!  Des related the story of Sergeant Reginald Judson, one of WWI's outstanding soldiers who was decorated with NZs highest gallantry awards. On Stockade Hill the Judson memorial oak tree, which was grown from an acorn from Windsor Castle, reminds us of the war hero.    As we left Howick we passed Auckland's oldest church and the second oldest wooden church in N.Z.,  the beautiful  All Saints Church with its war memorial lych gate

On to Pukekohe and the Pukekohe East Presbyterian Church, stockaded in 1863 and still bearing bullet holes in its walls, testament to the fierce battle bravely fought here defending the church from Maori attack.   A wander around the graveyard proved both interesting and sobering.    The rain stopped as we arrived at Alexandra Redoubt in Tuakau so we took the chance to explore the trenches, admire the bright pink blooms of the South African Oxalis (how can such a pest be so pretty?)  and follow a bush track down to a lookout over the Waikato River.

Our last port of call, and another chance to stretch our legs, was the Rangiriri Pa Historic Reserve, site of another important battle.  This reserve is well worth visiting and its story is brought to life by a number of interesting information boards.

So it was a day of lively stories from Des and a couple of short walks enjoyed by all, with an icecream stop at Pokeno on the way home.

Thank you,Des, for sharing your phenomenal knowledge with us and for organising this trip.  Research, 10 out of 10! 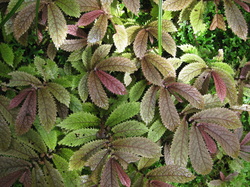 Parataniwha's lovely colours
Everyone was well bundled up in warm and waterproof gear under brooding skies as we set off up north, but we were lucky (as so often happens) and by noon the sun was shining down.

Our walk started after a quick chat with the fascinating fancy chickens that roam the carpark at the Pohuehue Reserve.  Not forgetting to thoroughly scrub and spray our boots (thanks John), we headed off to join the Beverley Price Track.  This track was named in honour of a local hiker and mountaineer who died on Mt Erebus and there is a plaque on the waterfall platform remembering her.  This part of the track is particularly attractive at this time of year with the green-hooded orchids blooming prolifically.  As the track climbed towards the logging road at the top of the loop, thoughts turned away from the pretty orchids to just trying to stay upright in the muddy and slippery conditions!  Rather muddy clothes would have been a challenge for some who were without electricity on Sunday and Monday after the substation fire at Penrose.    We returned back down through pine forest and it seemed strange to be walking on a carpet of pine needles, with dead needles overhead hanging from the branches making for an almost ghostly scene.   Towards the end of the track we admired the vibrant red, green and purple of the ground cover, Parataniwha, Elatostema rugosum  and the startling orange fungi, Pycnoporus cinnabarinus growing on some fallen wood.

Back on the bus and much boot scrubbing and changing into clean shoes and we were off over the Puhoi River to lunch in the sunshine at the Domain.  All fed and watered, we set off uphill again on the Puhoi Loop Track, a one hour walk up to a lookout over the Puhoi Valley.  The white Manuka was flowering and at the end of the track we found a Judas Tree, Cercis siliquastrum, identifiable by its heart-shaped leaves and bright pink flowers.  It is said that Judas hanged himself from one of these trees, hence the name.

Before leaving there was some free time to explore Puhoi - some headed straight for the iconic pub and a cold beer, others needed a good coffee and some visited the excellent little museum and historic church.

Thanks again to John for organising another great day. 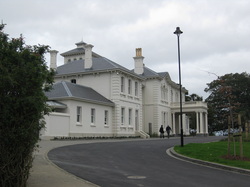 Pah Homestead, Hillsborough
This walk saw 29 of us exploring some of the beautiful coastline of the Manukau Harbour in the Hillsborough area.   Starting at Hillsborough Bay, our route took us to the Belfast Reserve then through beautiful bush up to Goodhall Street.  We wandered through the historic Hillsborough Cemetery with its fabulous views over the Manukau Harbour and the very real sense of history that old cemeteries have.  Of special interest  was the area where many catholic nuns were buried.   Next was Granny's Bay and Wesley Bay, named after the Wesleyan Mission in the area back in the 1940s.  The tide was out enough for us to be able to walk along the coast to Waikowhai Bay and enjoy the stunning views.

Our day concluded with a visit to Pah Homestead in Monte Cecilia Park.  This grand building built in the 1870s was one of Auckland's largest and finest homes at the time. Interestingly it was based on Osborne House on the Isle of Wight, the home of Queen Victoria and Prince Albert.   It now houses the James Wallace Art Trust's collection of New Zealand art.   We spend a relaxed hour enjoying wonderful coffee and cake (some of us!) from the café there, wandering through the galleries and taking in the outdoor sculpture in the sunshine.

Thanks to Janet for planning this new walk.