SATURDAY
​
Thirty-two of us headed off on this cool, clear Saturday morning for four days of adventure.

The changing seasons became very apparent as we headed south with many large deciduous trees starting to display their yellow and red leaves.  As well as a coffee break, we had two scheduled stops on the way to our base for the weekend – Te Aroha.
Taitua Arboretum

The first walk of our trip was in the 22 hectare Taitua Arboretum, which is a five minute drive from Hamilton.

We rambled along in sunny weather through the peaceful surrounds admiring the mature trees, shrubs and pasture.  One of the shelters provided on the way beckoned as a suitable lunch stop and a place from which we could admire the pin oaks nearby.
​Our ninety minute loop track wound around ponds and took us through areas of diverse greenery:  a bamboo collection and tunnel, a cryptomeria walk, a collection of ancient trees, a NZ native tree collection, oaks and redwoods. The giant eucalyptus gum trees which had shed long pieces of bark exposing the white trunk and the many exotic trees displaying their autumn colours, tempted many of the group to stop and take photographs. 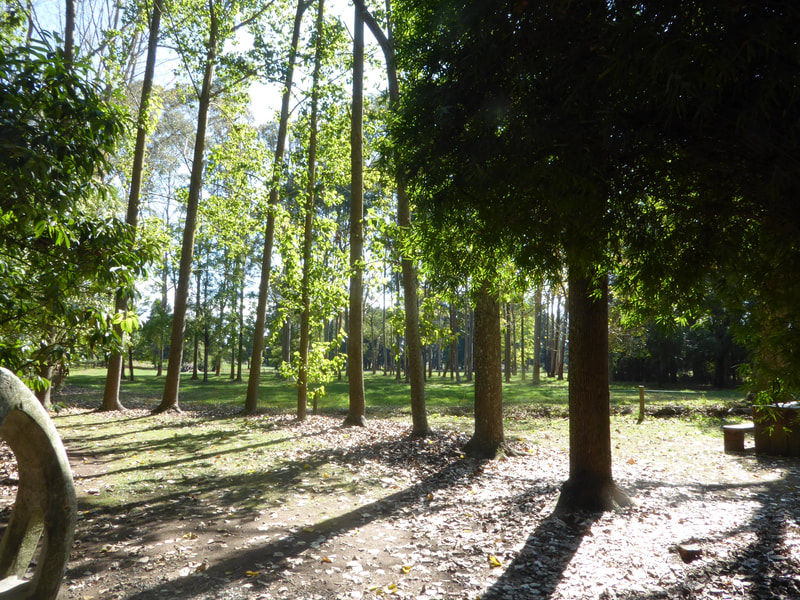 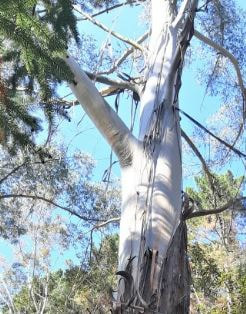 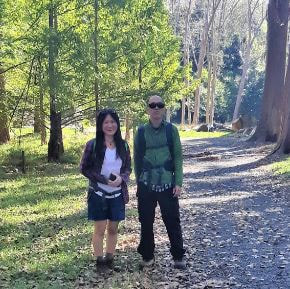 ​Firth Tower Museum
​
Amy (the Manager of the Museum) gave us a very warm welcome.  She outlined the history of the area and the Museum, and told us about the pioneering families who had made their lives there.  After touring the McCaw homestead and The Tower, we enjoyed wandering through the historical buildings that have been gathered from the surrounding area and placed to replicate a small village – a church, Post Office, school, jail, settler’s cottage, sheds (displaying the history of farm equipment), barn, woolshed and stables. 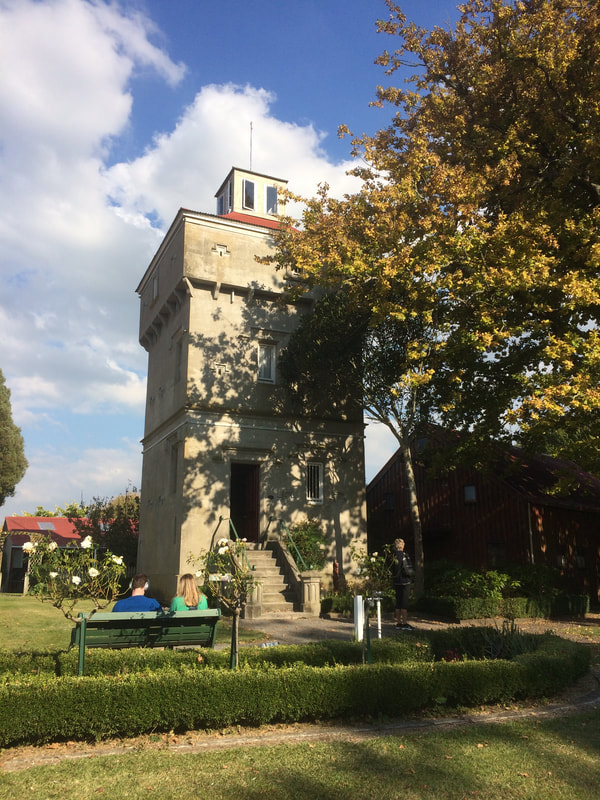 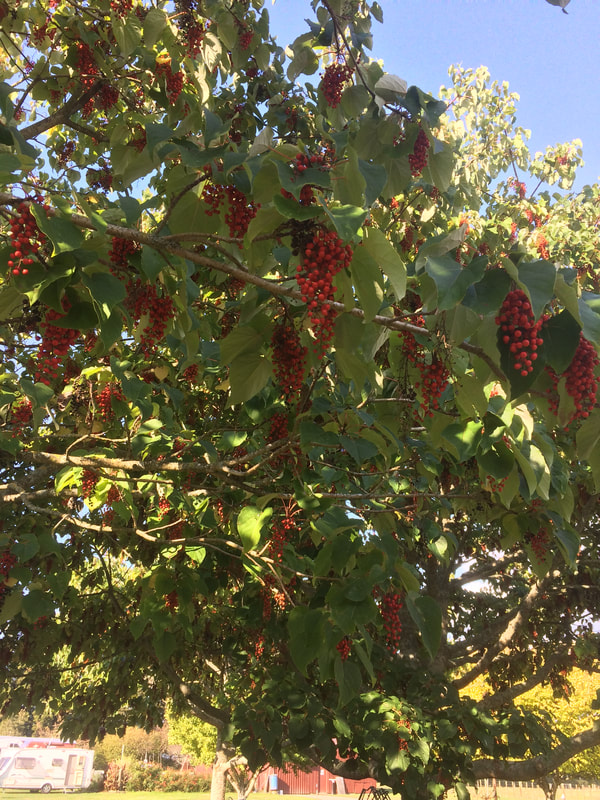 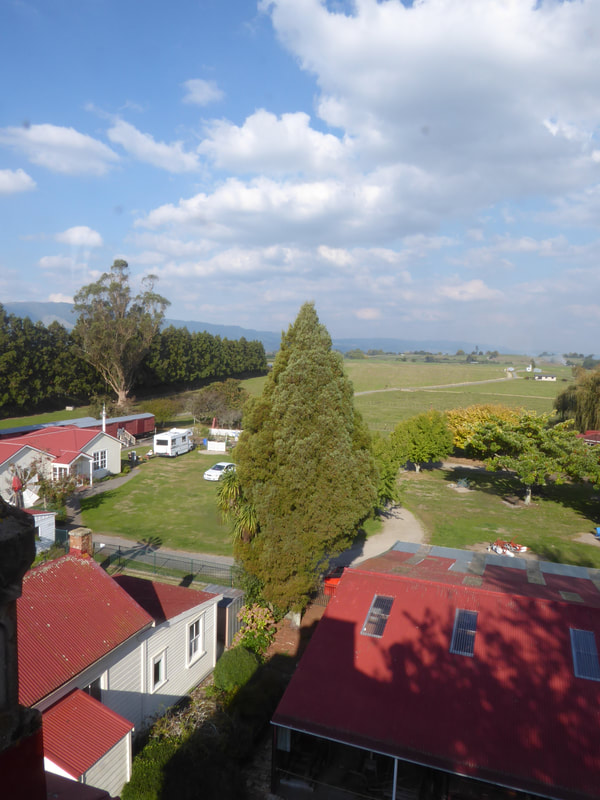 ​The property is surrounded by substantial lawns, a Potager garden (complete with scarecrow) and many well established trees, including three beautiful Chinese wonder trees (Idesia polycarpa) - center photo above.
​ 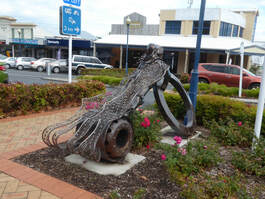 After a very long day, we were delighted to find the owners of Te Aroha Motel (Glenys and Robin) were extremely well prepared for our arrival – all rooms were ready and even a brazier was lit in their newly developed BBQ area for our happy hour.  This was the beginning of an amazing weekend of service from these welcoming hosts.

​A short walk then had us all dining at Ironique Café.

One of Adrian Worsley's scrap metal sculptures to admire as you wander along the main road of Te Aroha.
SUNDAY

Aongatete - Boots on today – we’re off for a "serious" walk! 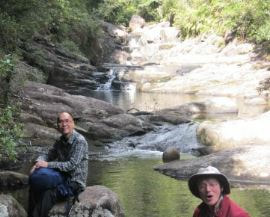 John and Kevin
First stop, the Aongatete walking tracks in the Kaimai Mamaku Forest Park.  Our focus was on the Swimming Hole Track.  Although there were no viewing points along this track, it was a pleasant walk through the forest with forest canopy covering almost the entire length. ​

​However, as we approached the drop down to the river, the track became steep and slippery.  Several of the group chose to remain on firm ground.  The remainder, some with the help of a rope, made their way down to the water’s edge where they stopped for morning tea.

​​We retraced our steps until we connected with one end of the short Nature Trail.  It is a loop with numerous panels with detailed information about the trees and plants and it led us back to our waiting bus.  ​ 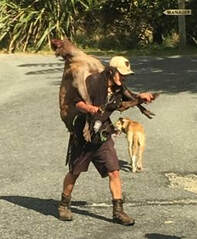 As we were preparing to depart, two young men exited the forest with deer slung on their backs.  This explained the shots that we had heard whilst on the Nature Trail.  It was more than a little disconcerting to discover just how close the hunters had been to our group.

Athenree
​
​Next stop, lunch in the grounds of Athenree Homestead.  We broke into small groups to tour the historic homestead, and the possibility of high tea in the original Athenree Railway Station was an option taken up by some of the group too.
​Bowentown
​
In contrast to our previous day’s walk when the walking conditions were ideal, we struck the predicted heavy rain when we reached the Bowentown Domain. Unfortunately, this meant we could not walk the Headland Track so missed seeing the terraced pa site Te Kura a Maia, one of the best examples of a traditional Maori coastal fortification. The keener members of the club, despite the wet conditions, took the opportunity to test out their wet weather gear and made a dash for the trig point on the headland. On another day we will return to take in the extensive views from this vantage point. Shrouded in cloud we could just make out Matakana and Mayor Islands but had to miss our intended visit to the caves and Anzac Bay.

Margaret & Bev made it to the Trig despite the weather!!
​Restaurant options are very limited in Te Aroha so it was off to Ironique for dinner again tonight.
MONDAY

Unfortunately, a SEVERE WEATHER WARNING made this walk impossible today.  Otanewainuku is a beautiful piece of bush with abundant birdlife - hopefully the Club will have the opportunity to walk it on another occasion.
​10 PIN Bowling

What do 32 people do, away from home, when the weather is so bad?  GO 10 PIN BOWLING!!
​Off to Tauranga for an 11am booking.  A fun experience with lots of laughter - and many different bowling styles!  I’m pleased to announce that the highest score of 92 was bowled by Kanako.  Well done Kanako!!
​McLaren Falls Park

Although the weather warning was still in place when we returned to the bus, the skies were looking clearer so we headed to McLaren Falls Park – known as Tauranga’s hidden jewel.

​It is one of the best botanical collections of trees in the North Island. Situated 10 minutes out from Tauranga this extensive park of 190 hectares was a delightful place to walk around.​ 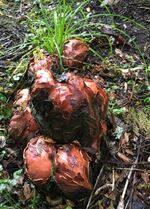 ​
​We meandered along the Lakeside Walk admiring the exotic trees showing off their autumn colours and stature. With views over the lake of these trees in the soft autumn light we felt we could have been in a grand park in Europe. Swans with their cygnets and ducks with their ducklings attracted many photographers.

An example of tree's "knees" - pneumatophores, which are "breathing roots," produced when a tree grows in boggy ground and can't get enough oxygen from the soil into the root system.

On another well-formed path we also walked the picturesque Waterfall Track.
​From the park the bus took us back down the winding road to a stopping place so we could read about the power station and the history of the park on the information boards.
​
Unfortunately, the weather was still very unsettled as we approached happy hour and dinner.  We were unable to have the BBQ, scheduled to be provided by a local caterer, in the area that the motel owners had created.  Instead, they had arranged for us to have access to the Community Centre directly behind the motel.  Party time! 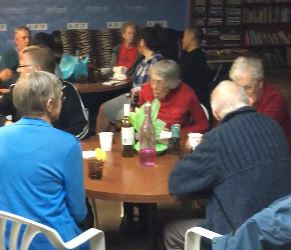 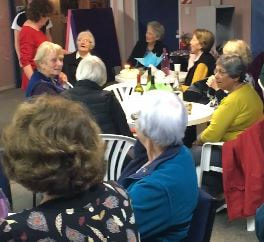 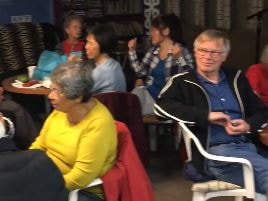 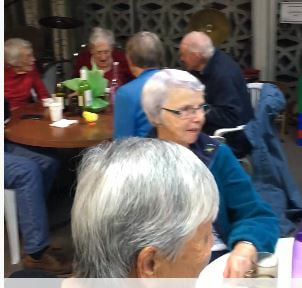 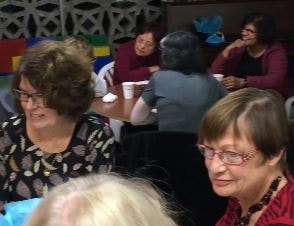 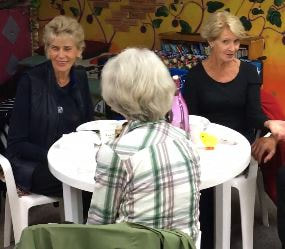 ​What a great night it was.  We were all super impressed with the caterers, The Old Forge Kitchen.  They were shining examples of small town hospitality.  They arrived with a very large bag of feijoas and invited us to help ourselves and then went on to provide amazing food and great service.

Barbara's birthday celebration
​Tomorrow, we were splitting up to take part in a variety of activities, so we also took this opportunity to recognise the fact that somebody was going to be having a special birthday tomorrow - Barbara was going to be celebrating her 89th birthday!  Speeches and cake rounded off an extremely pleasant evening.  Three candles - one for the past, one for the present and one for the future!
​TUESDAY

We started the day by all walking to Te Aroha Adventure and dropping off our two kayakers – Anne and Fiona. 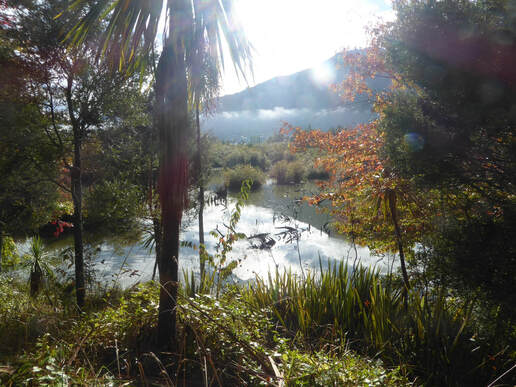 The rest of us continued on to the old railway bridge and entered the Howarth Memorial Wetlands.  Originally Te Aroha’s rubbish dump, it was turned into a wetlands area in 1948.  A pond was dug and planting followed to beautify and provide habitat for wildfowl.
​Unfortunately, there was little birdlife when we were there but the number and variety of plants impressed the group.
​Hobbiton Movie Set​

The drive approaching Hobbiton was an experience in itself – beautiful countryside with well maintained paddocks of sheep and cattle.  All the overseas tourists who visit Hobbiton must be mightily impressed before they even get there. 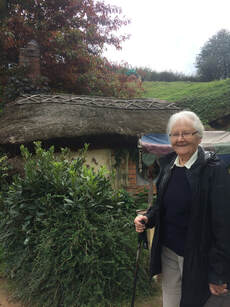 ​There were 41 in our group which made it rather challenging for the guide – keeping us all close – and the walk covered approximately 40 Hobbit holes.  The attention to detail everywhere is simply amazing, but keep in mind this was an “external” movie set.  The interior scenes of the Hobbit holes were filmed in Wellington.

​​The end of the tour brought us to the Green Dragon Inn (a very quaint Hobbit hotel), where our entry fee entitled us to a drink – one of their specially brewed beverages - beer, cider or ginger beer.  A good excuse to toast Barbara on her official birthday!
​Kayak Adventure

On this day a couple of us (Fiona and Anne) decided to take the option of the Te Waihou Journey which was a   guided tour of the town and surrounding area followed by a self-guided kayak trip down the Waihou River.
​After an hour and a half we arrived at the point where Kelvin was waiting to direct us to the bank. Here we glided in to the landing and with a combined heave ho pulled up the kayaks and helped with the loading onto the boat trailer for the short drive back to the Adventure Te Aroha office.
​ 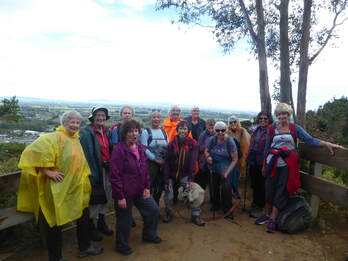 The 15 members of the group not going to Hobbiton, explored part of the Tui Domain Walk.

​We started in the Te Aroha Domain, close to the Mokena Geyser (which sadly wasn’t active at the time).
We noticed early into the walk that a large number of trees had been ring barked for removal.  Most of these were tree privet (Ligustrum lucidum) - a listed pest plant in New Zealand.  It is an evergreen tree which produces thousands of black fruits which are spread by birds, grows rapidly and displaces native plants and trees.
After about twenty minutes we came to a sign directing us up to the Crusher Falls, Noel’s Lookout and Colin’s Lookout.  Taking care, as due to the wet weather the steps were slippery, with a few clay areas mixed in, we proceeded up several flights of steps.

We came upon the remains of a rock crushing plant used in past gold mining processes.  The process took the acid-bearing rock and pulverised it into talcum powder consistency.  This increased the surface area and created a hazard as, if water gets into it, acid is formed immediately.  In the past this has resulted in contamination of streams in Te Aroha.
​Up a few more steps to the Colin’s Lookout to a view of the Tutumangaeo Falls which supplies the town’s water supply.  A few more steps and we arrive at Noel’s lookout where we enjoy a view over the Te Aroha water treatment plant, the township and the Waikato plains, as well as a background of cotoneaster plants laden with berries.  Cotoneaster is native to Asia, Europe and north Africa and is a larval food for moths, the berries are eaten by birds. 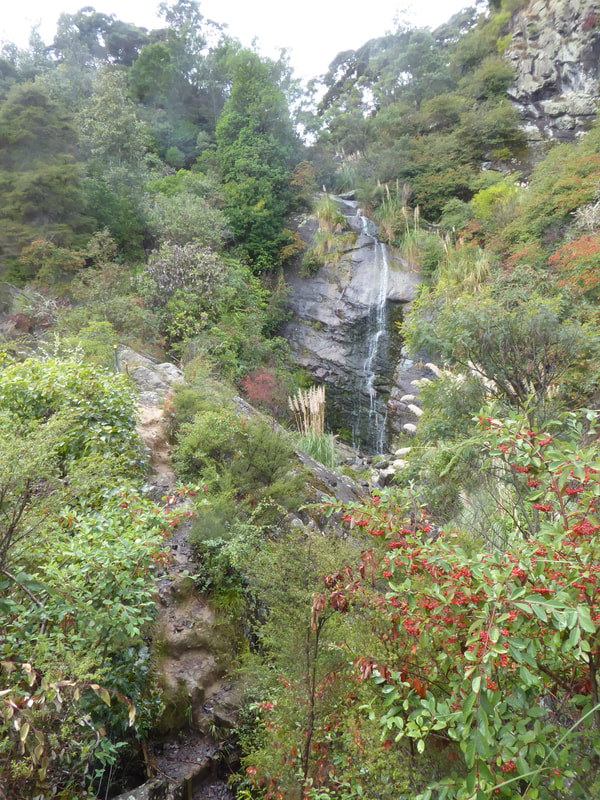 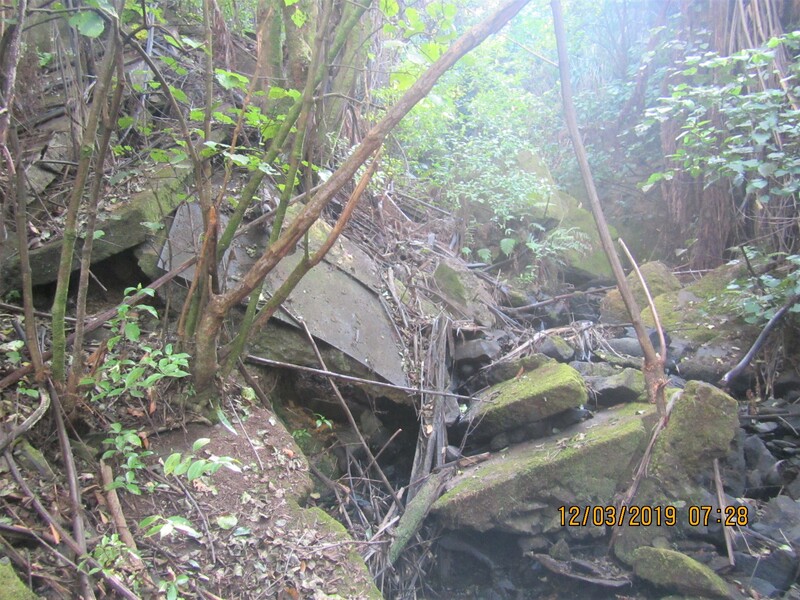 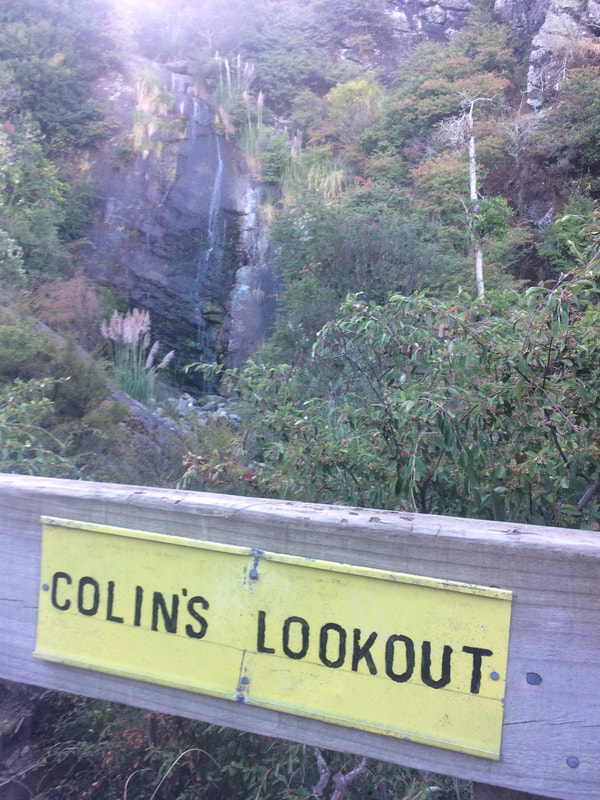 Descending down the steps we take a short walk to look at the No.22 or ‘honeymoon’ or ‘lovers’ spring where newly married couples would dip their wedding ring into the spring to ensure a long and happy marriage.  https://www.nzgeo.com/stories/in-hot-water/ 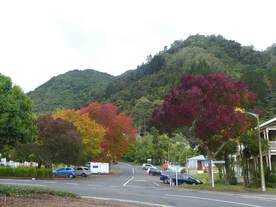 ​Finally, perched on the side of the hill by the town’s water treatment plant, we had a relaxing lunch before walking back to the town via the roads admiring the historic houses and cottages along the way.
​
With time to spare before the bus pick-up some had a well-earned rest while others took the opportunity to explore the domain, museum and cafes.
​A huge thanks to Molly and her helpers - Fiona, Vanessa and Linda.
Text:        Molly, Fiona, Linda
Photos:   Molly, Jennifer, Fiona, Praemi, Katherine