Destination
Our destination this year was the eastern side of the Coromandel Peninsula, stretching from Whitianga (in the north) to Sapphire Springs (just south of Katikati).   A stunning part of New Zealand!​
​ 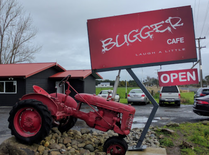 ​DAY 1 – Auckland / Broken Hills / Onemana
​
The weather forecast, when 32 of us set off on Saturday morning, was ideal for the four days that lay ahead.
First stop – Bugger Café!  A fun choice for our coffees with lots of artwork and humourous expressions to read. 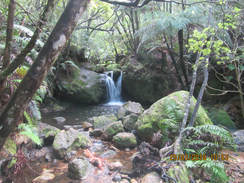 What's not to love about moss-covered rocks and waterfalls?
​After refuelling we made our way to the site of our first walks - Broken Hills an area of ​interesting mining history, natural beauty including the Tairua river, waterfalls, tunnels and some lovely ferns.
​
A group – Main Range, Water Race, Collins Drive, Third Branch  and Puketui Tracks loop.
This route was definitely a tramping experience to remember.     A bit of scrambling, climbing and lots of steps, the walk took us around 3 hrs.
​ 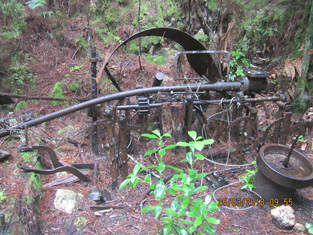 Rusting relics abandoned in the bush

​
​There were constant reminders of the history of the area as we encountered rusty relics of mining equipment abandoned in the undergrowth, boarded up mine shafts, the old aerial ore hopper site on a hillside and at the end of the walk, the site of the Government battery beside the river and a beautiful waterfall. 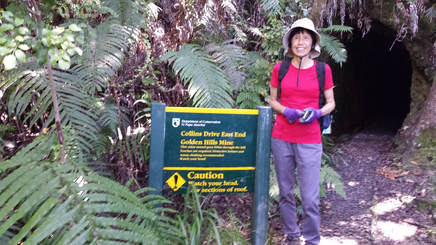 Spring happy to see daylight again outside the tunnel entrance
,

At the highest point we had the chance to enter the Collins Drive tunnel -  500m of underground mine system which was cut through the hills in the vain search for a quartz reef.

It was cold, spooky and dripping with water inside,  and clutching our torches,  we ducked to avoid the low roof and made our way slowly through to the other end.  It was magic to get so close to glow worms that we could see not just the light but also the whole worm and silky threads hanging down. 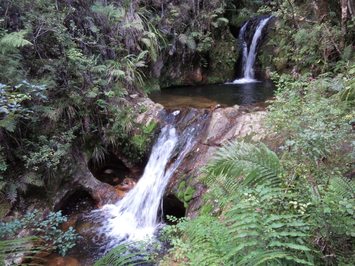 B group – Golden Hills Battery, Broken Hills Battery and Gem of the Boom walk
A more leisurely walk for the B group but also very scenic and interesting to see the remains of the mines and settlement of days gone by. 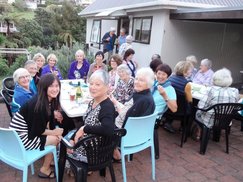 ​Club dinner
After settling into our excellent accommodation for the weekend, (Onemana Beach Chalets), Wendy produced a wonderful meal for us all which we enjoyed el fresco.  We made short work of chicken, beef, interesting salads, hot potatoes and garlic bread followed by apple pie!  Big thank you Wendy. 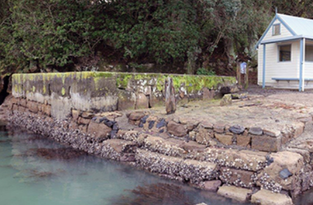 Historic Ferry Landing wharf
​
DAY 2 – Ferry Landing / Whitianga / Shakespeare Cliff / Cathedral Cove
​
We headed off at 8am in the direction of Ferry Landing (oldest stone wharf in Australasia – built 1837).  A two to three minute ferry ride then had us across to Whitianga in time for a quick look around and a cup of coffee prior to visiting the Mercury Bay Museum, formerly a dairy factory.
​
​​A small museum, with an extensive collection of exhibits highlighting the history of the area – Maori artifacts, fishing, kauri, gold, and of course, the arrival of Captain James Cook on the Endeavour. 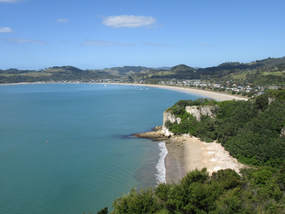 Cooks Beach
​Back across the water, onto the bus, and off to Cooks Beach for lunch under a cluster of large shady trees.  The A group then made their way up to the Shakespeare Cliff Scenic and Historic Reserve (viewing the memorial to Queen Elizabeth II’s visit on the 200 year anniversary of Cook’s arrival), as well as seeing the acknowledgement to Helen Clarke who planted the 10,000th kauri there in 2001.
​
The B Group opted to take the more gentle gradient and on arrival into Flaxmill Bay had time to view the amazing sculpted rock formations.  It should also be mentioned here that at least one person found time to take her boots off and paddle the length of the beach – go Wendy!! 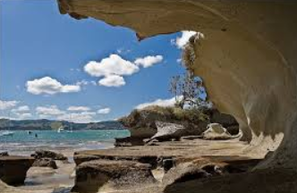 Amazing rock formations
​Next stop – Cathedral Cove.  Popular at the best of times, but during a long weekend with beautiful weather, the crowds were hard to believe - even though it could only be accessed by water or foot.  The water taxis were doing a roaring trade and those of us who walked up and down to the cove were amazed by the number of different languages we heard along the way.  Cathedral Cove - a definite highlight for us and our foreign visitors.
The decision was made to drive directly to the RSA in Whangamata for dinner, rather than return to Onemana to freshen-up and have “happy hour”.  We needed to be at the RSA early because of the size of our group – a wise decision, the place was extremely busy.  The meals were large and good value.  At this point, it should be mentioned that at least two ladies succumbed to ordering ice cream sundaes – they probably didn’t know what was coming – 5 scoops of ice cream plus 2 large mounds of cream!!

Lunch stop – Sapphire Springs Holiday Park (just south of Katikati).  Also on offer, natural thermal swimming pools and short bush walks, so some had a  soak and some took a wander.  What a lovely place to be on a sunny Autumn day. 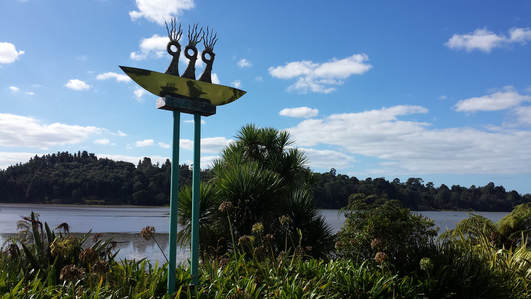 Near the beginning of the bird walk, Katikati

​After a short drive back up to Katikati, the bus dropped us at the northern end of the bird walk and we followed the river into town whilst admiring the bird life and the art.  From here we followed the interesting haiku walkway.


Katikati gives the impression that this is a community that cares – beautifully tended hanging baskets adorned the main road and there are more than 66 murals depicting the history of the township as well as numerous sculptures, carvings, mosaics, etc.

​
We all seemed a little weary by now but we had one final short stop to make for the hardiest in the group – the Whiritoa blowhole.  The blowhole, at the southern end of the beach was formed by continual blasting of air along the cracks in the cave roof until it collapsed.  It also has two features of interest – a double entrance to the sea and a short exit tunnel leading to a shallow lagoon.

Unfortunately the tide was very low so we weren’t able to see the blowhole in full operation, but it did give us the opportunity to really see and appreciate the erosion and clefts that were clearly visible. We also found a puffer fish washed up on the beach.  Apparently these poisonous fish are turning up on our beaches in numbers now. 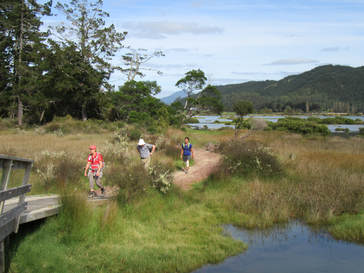 Pauanui-Tairua walkway through the wetlands area
The original plan was to walk to the Luck at Last mine.  However, we were advised that the access road through the forest was closed because of harvesting and the number of logging trucks on the road.

​We reverted to Plan B and had the bus drop us at the Pauanui Lakes Resort entrance.  The community is constructing a track that will eventually link the towns of Pauanui and Tairua.

We walked back into the township of Pauanui  on the part of the track that has now been completed – metaled paths through pine forests, onto expansive views of the estuary and across the boardwalk over the mangroves.

Many thoughtfully positioned benches along the track, with acknowledgement to those who had helped fund the project. With masses of toetoe around, we also learnt the difference between these plants and the pampas grass.  ​ 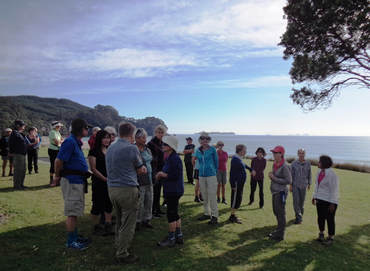 Hard to get a group photo but here are some of us!

​
​The bus then took us down to the beach where we found a shady spot for lunch.  A couple of keen swimmers donned their bathers and had a swim, others rolled up their trousers for a paddle and at least one person was spotted napping on a bench!  Time to head home.....
​

​Finally - no trip that is being organised by Molly would be complete without an ice cream stop!!  A detour off the motorway had us at Pokeno, the town renowned for its large inexpensive ice creams.  A significant number of ice creams were certainly purchased although nobody was seen losing their willpower and buying a 7 scoop!

Huge thanks to Molly and her helpers, Wendy, Anne, Linda and Marilyn for all the hard work in putting a marvellous weekend away together.   Thanks also to Auban our driver.