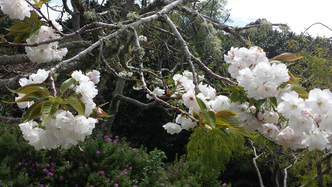 Spring blossom at the Botanic Gardens
​
This walk seemed to have a life of it's own, it was changed so many times for different reasons.  We had planned to visit Awaawaroa Alpacas in the morning but visits to the farm were cancelled due to drainage work being done.  (We have rebooked this visit for next year!!)

With just a small number of walkers booked we decided to forgo the bus and carpool.   Then when the heavens opened on Saturday night and it was still bucketing down early Sunday morning, we wondered if the day was doomed!   However  by 9am when we met at Auckland Botanic Gardens Visitor Centre the rain had eased.

Taking a meandering route through the gardens starting at the herb garden and taking in the Suffragettes Garden, Potters Childrens garden and the Spring Blossom Valley, we noted some interesting trees and features: the aromatic Lemon Myrtle ( Backhousia citriodora), curiously named Chaste Tree (Vitex agnus-castus) or Monk's Pepper, the Australian tea-tree (Melaleuca) with its strange bark and learnt how some of these trees are used medicinally today.
A quick look at a living roof as a way of managing stormwater, then on through the flowering cherry trees, magnolia garden and the experimental pasture area and we were on the path that leads to Totara Park.
Totara Park covers an area of 216 hectares, both native bush and farmland, and has walking and biking tracks as well as bridle trails, playgrounds, swimming pool and tennis courts.   The Puhinui Stream forest trail is 4km long and passes through beautiful native bush with mature rimu, totara, puriri and nikau.   The paths are well maintained with steps where needed.    Entering the trail beside the tennis courts, we walked the eastern end of the trail, finishing back at the original homestead, now Beaufords  Reception Lounge.

Then it was back to the Gardens via the Gondwana Arboretum and its wonderful "dinosaur" trees to the cafe for a coffee-to-go and lunch in comfort outside the botanical reference library (a welcome chance for the damp bedraggled troops to dry out before heading to Pukekohe.)
Hickey's Spring Reserve on Paerata Rd is the site of a former dam  (1882) which powered a flour mill, and was once the source of Pukekohe's water supply. The short riverside walk is attractive and was even more so when the sun came out for us!   A few mature trees of note - a 100 year old swamp cypress planted by Benjamin Hickey and two very old magnolia trees caught our eye. ​ 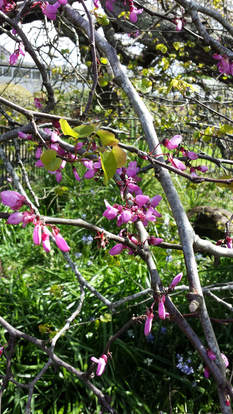 The Judas tree
​Last stop was a bit further down the road at Seddon Reserve with its famous historic Judas tree.
This Judas Tree was grown from seed collected by Sam Allen, when he was wounded in Sangro Valley, Italy, during WW II.  His mother planted the seed in a container in Parnell.  In 1948, his brother Dr. W.B. (Bill) Allen and his wife Sheila brought this tree to Wellington Street, Pukekohe, and later to this site in 1952.  (ie, 65 years ago!)
Protected by an iron fence and with some of its elderly branches propped up, the tree is a magnificent sight, even though it won't be in full bloom for a couple of weeks more.
Historic lights, a memorial to Richard Seddon, heritage information boards relating to nearby buildings, and manicured gardens add to the charm of this small South Auckland reserve.

Thanks to several people who contributed to parts of this walk in all its versions!  -   Elane, Praemi, Sharleen and Derek, and thanks to our drivers - Anne, Elane, John and Praemi.
Text - Sharleen, Photos - Praemi,Sharleen 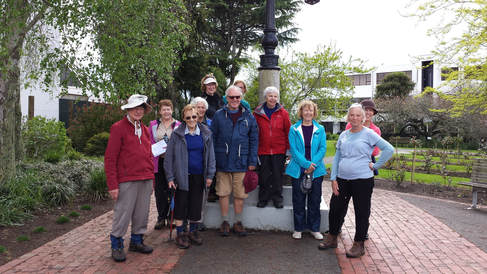 Some of us at the memorial lights in Seddon Reserve, Pukekohe

Today we had two walks, one short, the other long.  The first was in Sanders Reserve at Paremoremo.  Originally a farm, it was bought by the Council and developed into a park with cycle tracks, bridle trails and a walking tracks.  (For anyone who wants to keep grandchildren entertained, there is also a lovely kiddies’ playground by the car park!)

There are lovely views here and safe beaches too.  We had been promised a nice surprise on this walk and we certainly got one: the Faraway Tree, a sculpture by Phil Bonham and well worth seeing.  Every part of the tree was carved with animal heads or human figures in various postures!  This was where we stopped for morning tea.

​Further on, the track continued down to a beach and coming back up we carried on along a ridge that was a bit nerve-wracking to walk on, being covered in old tree- roots.  This afforded another view over the water.  We then took another route back to the bus, getting our boots very muddy and, using Dot’s method of keeping the bus clean, we tied plastic bags over them to get in the bus and head for the head for the second walk of the day.
​ 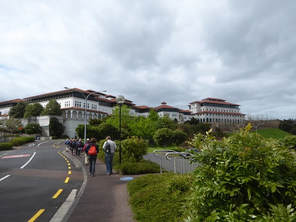 Walking through the university grounds.
​In Albany, we walked a short distance on a well- made track and found ourselves in the Albany Campus of Massey University.  Admiring the architecture of the old and new buildings (both in the Spanish Missionary style), we went through and past one of the science buildings with a quotation from Sir Isaac Newton: "If I have seen further, it is by standing on the shoulders of giants."
We then came out from the grounds and crossed the busy road (carefully!) to find the well-hidden entrance to the Fernhill Escarpment, formerly called the Totara Walkway.
​The latter name is more appropriate, as we found out:  this area of mature bush was full of totara.  There was also  miro:  the evidence could be seen on the ground, small twigs that had broken off were strewn along the track, but the trees themselves were so tall that we could not see that far up to recognise the foliage and anyway, we could spot no trees with the smooth bark found on miro. 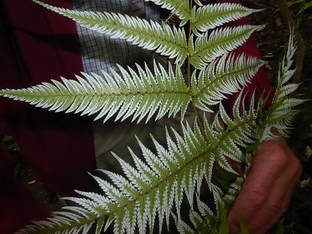 Underside of a Silver Fern leaf.
​

​How often do we see the silver fern and take it for granted?  John showed us how the silver hue develops: on the underside of the leaf,  the silver colour begins at the margin of the leaflets and works its way in!
​Another discovery was an odd-shaped mushroom growing along a tree trunk, later identified as Auricularia auricular, which grows mainly on dead wood but can also grow on living tree trunks and can withstand very cold temperatures.  Hence its flourishing presence even at the end of winter. ​ 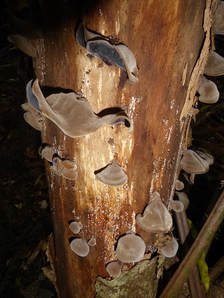 The ear-shaped Auricularia auriculata
​Emerging from the track we headed for Kells Park where we had lunch.  After lunch we followed the grassy  Lucas Creek riparian area and one group returned to the bus while others went on to the site of the “Lucas Creek” wharf, (renamed “Albany” in 1890), noting where the high pressure gas main tunnels under the creek on its way to the prison at Paremoremo. Then finally back via the Marine Research area of the Albany Campus and the bus.

Thanks to Marilyn and Wendy who did the initial recce and to John who stepped in to lead the walk when Marilyn had to pull out due to illness.

​ An ominous weather forecast for rain, cold temperatures and strong winds saw twenty-eight nervous walkers climb onto the bus that morning.  However, we had been warned we could also expect mud and wet feet, so were well prepared with plastic bags to put over our muddy boots when travelling on the bus between walks (Thanks Janet for reminding us of Dot’s handy tip).

​In the bus along the way we enjoyed views of lush, gently rolling countryside with turkeys, lambs and elk in the pastures.  On arriving at Te Rau Puriri Regional Park we headed down farmland towards Omokoiti Bay.  A squall of wind and hail hit a few minutes into the walk, however we were soon in the Patauoa Creek Valley which provided shelter from the wind, the squall passed and the sun came out.  An easy track from here apart from negotiating areas of water and mud, passing stands of Puriri and Gum trees and gave us views to hectares of regenerating native bush.
​Golden sands and calm rippling water greeted us on Omokoiti Beach and we took a few minutes to admire the view across the harbour towards Glorit and the native plants framing the beach and enjoy some morning tea.

​​The weather started to change and as we were returning the same way some headed off in the hope of beating the weather, unfortunately track markers were missed, the rest of the group followed like the sheep on the surrounding hills and we found ourselves on a track well above where we should have been.  A careful descent along a fence line and through some manuka took us back on track to the bus.

​Shelley Beach, our next stop, provided toilets and a café for coffee to enjoy with our lunch.  After lunch, a group of keen walkers headed up 130 steps for a short bush walk behind the beach, some getting caught in a very heavy shower of rain.  Once all were back on the bus it was decided to skip the planned third walk and head back towards Auckland.
​
​​On the way, we had a short stop at the yellow Clarks Lane pedestrian bridge which crosses the motorway at Hobsonville.  We took a short walk over the bridge and admired the tiles and carpet of clay art decorating the bridge created by potters Matt and Kate McLean and commemorating Rice Owen Clarke, a pioneer of the clay industry.  Also at this site an artwork call “Sinton Windows” by John Radford, incorporating original windows from Sinton homestead, a heritage building that was unable to be relocated and demolished when the motorway was built.
A good day was had by all despite the weather!!

A big thank you to Derek and Gail who did several reccies for this walk!

Thank you also to Molly for the written report and Dhammika and Ernest for photographs.