We had ordered the bus and the sunshine and we had thirty-one people booked for the trip. By taking a diversion from the main road we saw a new suburb of Hamilton.  Who knew that the Mormons had a large presence there, with a big tract of land on which to build houses and a church?

​​On reaching Horseshoe Lake we were ready for morning tea. Sheltering from the hot sun in a barn, we found of loads of information about the flora and fauna to be seen in the planted area.  We could also see how the lake had acquired its name, being in the shape of a horseshoe.  There were many young kahikateas growing by the lakeside and the area was also full of beautiful flaxes in flower.

Waiwhakareke Natural Heritage Park is made up of several adjacent areas planted on either side of the northern and southern tracks that make up a loop.  Native trees have been planted along one side in odd numbered years and on the other side in even numbered years.

Local volunteers ranging from teenagers to people over eighty years visit the new plantings one Saturday morning a month and remove grass and other weeds from around the newly planted saplings, until they are well- established.  The track is quite short and was completed in less than an hour by our fit group. 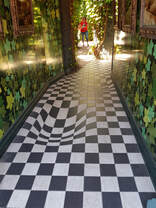 Surrealist Garden entrance
​Next we went on to Hamilton Gardens, always popular for an end-of-year easy walk and socialising.

After lunch, when Linda’s beautifully packaged, delightful sweet treats had been appreciated, we set off to look at the three garden areas the Club had not visited before – and wow, were they a wonderful surprise!

​The first of these was the Surrealist Garden, opened earlier this year, where giants seemed to be standing and waving their many arms up and down, with larger than life garden implements placed around the lawn.  Ivy covered the “giants” but had not yet grown to cover the full length of all the “arms.”   It was like a Dali painting come to life! 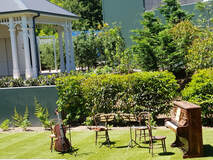 ​The garden has been planted in the style of an English country cottage.  Moving into the next area was like walking into her short story “The Garden Party”. A   picnic table was loaded with food and drinks, musical instruments (including a piano) ready in one corner of the garden waiting for the players to walk in and start playing.  Alas, it was a mock-up, with plastic cakes and wooden musical instruments! 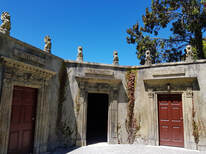 We took the door leading to Wisdom!
​The Mansfield Garden leads into the “Picturesque Garden”  -  a plaque at the entrance explained these were “intended to appeal not only to the eyes but to the heart and mind” in the 18th century.  A ritual journey (real or fantasy) was often depicted.  Cue “The Magic Flute,” Mozart’s fantasy story and last popular opera.  There was Papageno the bird-catcher as we went in, the Magic Flute given to Prince Tamino lay on a pedestal, we saw the Three Spirits (in the form of cherubs) who showed Tamino the way.

Finally there were the three doorways he had to choose from, “Nature, Truth and Wisdom” in order to be admitted to the Hallowed Halls of Wisdom.  The Masonic references in the opera are well represented in the Picturesque Garden.