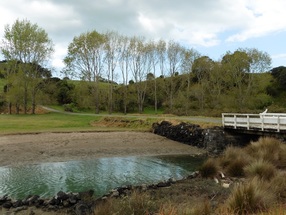 The causeway between Rangitoto and Motutapu.
Just a thirty minute boat trip from Auckland is Motutapu, one of the oldest islands in the Hauraki Gulf and one which boasts fantastic views, a fascinating history and a network of walking tracks through forest and farmland.  This Jurassic age island was the escape from Auckland and city life for twenty five of our members at Labour Weekend this year.

As Motutapu is a pest-free island and thus a haven for native wildlife, extra care had to be taken to transport our food and belongings in well-sealed bins and bags, boots and packs needed to be scrupulously clean to comply with biosecurity requirements.    So with a small mountain of bins containing food supplies and all our gear, we boarded our chartered SeaLink vessel for the short journey to the island.   It did rain on our parade but didn't spoil our enjoyment of our first day and the walk up the island from Islington Bay via the coastal route and West Point Beach to our camp - the Motutapu Outdoor Education Camp at Administration Bay.  In a previous life the camp was an important part of WWII history, being the army barracks for service people stationed on the island.  With a newly renovated kitchen and bathrooms and a woodburner to warm our toes in the communal area, we were comfortable and well fed by our caterers Carol and Jim (remembering the bacon and scrambled eggs for breakfast!).

On Saturday evening John and Maggie from the Motutapu Restoration Trust joined us for dinner, a talk about the history, flora, fauna and future plans for the island, plus as a bonus they screened a couple of short DVDs in the camp theatrette for us.  After this we were able to wander around the small adjoining museum. 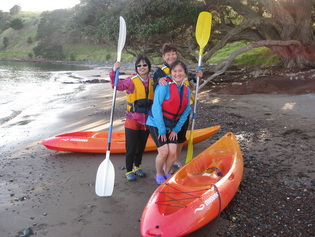 Armed with all the information from this evening, we set off on Sunday morning to walk the Centennial Loop Track down to Home Bay and the historic Reid Homestead (1901), former home of settlers James and Eliza Reid and their two daughters.   High above the homestead on Monument Hill, the gravesite of James and Eliza looks down over Home Bay and the magnificent exotic trees planted so many years ago.  Reid Homestead is open for visitors, continuing the tradition of hospitality shown by the Reids when thousands of Aucklanders would be invited to Home Bay for lavish organised picnics.

The Rotary Centennial Track back up to Northern Junction is a gem and a testament to the dedication of volunteer labour, with a forest of thousands of flourishing native trees now alive with birdsong and home to kiwi, tui, saddleback and bellbirds.     There couldn't have been a more spectacular site for lunch than where we sat overlooking Sandy Bay with Billy Goat Point far away to the right, the sun shining and sea sparkling.  Once fed and watered, we wandered around the  military installations, gun emplacements, bunkers and tunnels which played a big role in Auckland's defence during WWII.   The whole island is riddled with underground bunkers, observation posts and storage facilities, all preserved and made safe but many still accessible to explore.

There was more walking to be done, a leisurely stroll to Sandy Bay and the final walk back to Islington Bay on Monday.   We took the road route and made a detour to the nursery where all the plants are raised from seed,  and grown until they are big enough for volunteer planting in the revegetation programme.   We also spent a relaxing lunch break at the causeway where we spotted a pair of dotterels trying to keep track of their over-active chicks racing about on the shelly shoreline.

There were lots of highlights to remember - seeing Roz, Kitty and Kanako expertly manoeuvring their kayaks around one of the small offshore islands before breakfast (!), an hour long chilly vigil on Sunday night to see the little blue penguins marching up from the beach to their party place under our lodge (and don't they party noisily!).   Also pretty special - kiwi footprints spotted on the beach at Sandy Bay, takahe, Mum and Dad paradise duck marshalling their brood of ducklings about the island, quail scuttling round our lodge.    Definitely not so special was our close encounter with a particularly angry old bull as we followed the track through the bull paddock on our way to camp.  Some chose to climb the hill behind him and take the long way round, others decided to clamber through a couple of fences and sidle past, walking poles at the ready.   Funny the sign warning "Danger - Bulls - No access" was only on the gate at the  end of the track!

This will not be our last visit to Motutapu, the Sacred Island, as we plan to do some planting, weeding or nursery work next year to contribute to the island's restoration for future generations.

Special thanks to Molly who organised the weekend brilliantly, with help from Wendy, Janet and Sharleen.
See http://www.motutapu.org.nz/

The walk we had planned for today had to be cancelled, because several trees had fallen across the track, only a short way from the start of the track, as Derek found out when he did another recce a few days before the walk!
So instead, we headed for Mt. William and the Harker Reserve, also in the same general direction.
The climb up to Mt. William is gradual, with views over the Hauraki Plains and over South Waikato, going past a Manuka forest.   We climbed up fairly quickly, the strong wind did not encourage dawdling!  Stopping for morning tea at the trig was not an option today!
Going into the Reserve beyond the trig, we found a small area of bush with a variety of native trees, including nikau in profusion, rewarewa, kahikatea and taraire.  Beyond the reserve we stopped for a well-earned rest and a quick morning tea before returning to our waiting bus.
Driving to the Harker Reserve we  sat on the grass and had our lunch in case the rain came down on us later on!
This walk starts with a climb along a rough roadway, then goes into native bush, where we did a loop walk and still returned to the bus with only a few drops of rain to meet us.  We saw some ground orchids in the Reserve, but were unable to identify them, our orchid expert Barbara was not with us on the day.
​
A good day’s walk, thanks to Derek and Gail, in spite of the last-minute change of plan. 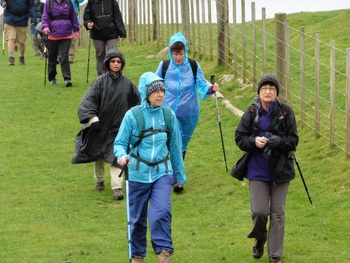 Elane and Marilyn leading the way, going up Mt. William 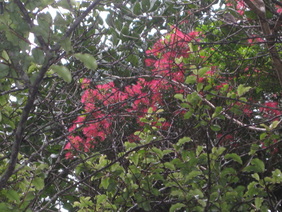 Carmine rata blooming at Wenderholm
Our walking began at Wenderholm, Auckland's oldest regional park.  Stately historic home, Couldrey House, stands in the grounds graced by lovely gardens and several significant trees, one of these being a majestic cork oak with its fascinating bark.  Passing by the carved pou at the entrance to the walking tracks, we set off to do part of the Perimeter Track where we knew the greenhood orchids would be flowering and where we hoped to catch glimpses of the native carmine rata and clematis blooming amongst the trees.  We weren't disappointed and were also treated to the sight of several kereru sunning themselves on branches and to the sound of abundant tui enjoying kowhai nectar.

The second walk of the day was in Dunn's Bush off Ahuroa Rd near Puhoi.   This bush was gifted to the QEII Trust by Arthur Dunn and is preserved for all to enjoy.   Our leader, Des, shared the story of how he helped Arthur Dunn mark the tracks many years ago.     Under a delightful taraire canopy, we travelled the Valley Track then on to the Big Tree Track, well-named after the giant rimu and kahikatea  standing guard there.   One of the latter is thought to be over 900 years old and another is a magnificent example of the northern rata almost rivalling its host tree in size.   We also saw swamp maire, totara, enormous puriri, nikau and young kauri.   At the entrance of the track a number of specimen natives have been planted, one of them a lemonwood perfuming the air with its lovely dainty blooms.

Although the track doesn't appear to be well-used and was a bit overgrown and muddy after rain, all had an enjoyable day and felt refreshed by the time spent in this beautiful piece of bush.

Thanks to Des and helpers for organising the day. 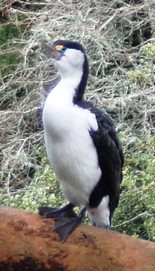 Pied shag posing for the camera
The weather forecast was a shocker and the rain was bucketing down at 6.30 on the morning of this walk.   It didn't look good!  However, as so often happens, by the time our bus picked up the 18 hardy walkers, there was a dramatic change in the sky and we walked happily until around 3pm without getting wet at all.

Our route began on the Cascades Walkway in Highland Park, took us through to Howick Historical Village in Lloyd Elsmore Park, then headed west along the Rotary Walkway which meanders along the shore of the Tamaki River.   Finally we crossed the Panmure Bridge and went on to walk around the Panmure basin.

This was an easy day on good pathways and offered a lot of variety.   There was historic Hattaway Bridge, named after one of the pioneer families, part of the old cobblestone coach road of the 1860s, Cascade waterfall on Botany Creek, a welcome café stop and a game at the marble park!    We were able to get up close and personal with a colony of pied shags nesting in two trees and also learn a bit of the history of the area and the three Panmure bridges.   The workings of one of the old bridges which used to open to allow boats upriver remain under the present bridge.

Some had to be dragged away from the temptation of a ride on the miniature railway and the delights of the Mr Whippy van at the basin so that we could get back to our bus before the rain descended again.

Thanks to Wendy and Sharleen for an interesting day.

Seventeen braved the adverse conditions with heavy showers at the start, but were rewarded with the diversity of vegetation we saw on these walks.    Our leader, Des Mitchell, with his immense knowledge of the bush and local history, plus our member, Brian Cumber,  made this a very interesting day.

Kauri Point is one of our gems of suburbia nestled on the coast and has lovely views of the Waitemata Harbour with the gentle sloping sandy beach of Kendall Bay.   Along the track we saw tanekaka celery pine flowering, earth star fungi, wild mushrooms and dracophyllum species, mingimingi with berries and flowers and smelled the beautiful perfume of flowering alseuosmia.   Mapou trees were plentiful in the area.

On the cliff walk to Chelsea, we saw the lovely hebe stricta.  Once at Chelsea Estate Park, we visited one of the three water supply lakes and brick dams constructed in 1884, saw pied shags nesting in the trees and noted the abundance of bird life throughout the area.  Ferns were plentiful - hen and chicken, kidney and crown ferns, also native orchids in bloom.    On the last leg homeward we passed through a magestic kauri grove standing untouched on the flanks of the stream valley along with kanuka, tanekaha, kamahi and hard beech.

A lovely day had by all - thanks to Des and Shirley.