10 December - Sailing on the Jane Gifford 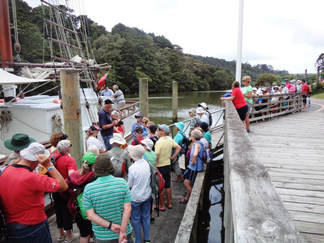 Boarding the Jane Gifford in Warkworth

​Twenty four years ago the Auckland Natural History Club sailed on the historic scow Jane Gifford  from Onehunga Wharf down the Manukau Harbour to Waiuku.    This December we boarded once more  but this time we were sailing down the Mahurangi River, nibbling on Christmas goodies with a glass of something cool in hand.  Over half of the club's membership squeezed into the biggest bus available and a few drove themselves up to Warkworth for our last trip for 2017.
​ 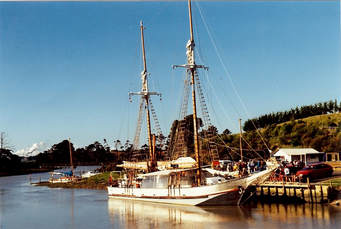 1994 - our club's previous trip on the Jane Gifford - arriving in Waiuku.
​
The Jane Gifford is New Zealand's last remaining rigged sailing scow.  Built in 1908 she has had a varied career - first carting granite from Coromandel to Auckland, then shell from Miranda in the Firth of Thames to the cement works on the Mahurangi River, and stock to and from Great Barrier Island.  She spent time in Waiuku  where she was restored and currently is moored at Warkworth and is operated by the Jane Gifford Trust. 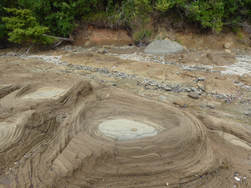 What we've called "cowpat" rock formations?
Of course we had to earn our afternoon cruise down the river by doing some exercise in the morning and this was in the form of a walk along the beach at Sandspit then up through some lovely bush on tracks developed by local enthusiasts, ending at the Sandspit Holiday Park.   Setting off along the beach towards Horseshoe Bay at low tide, we passed a row of imaginatively named baches, every name ended in "box", hence Winebox, Dogbox, Toybox, Starting box etc.  And underfoot we couldn't help noticing the unusual flat rock formations, best but not tastefully described as rock cowpats! 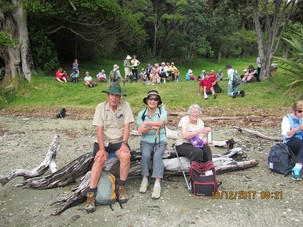 ​Horseshoe Bay was the perfect grassy spot for a quick morning tea before heading off into the bush and Frankie couldn't resist trying out the rope swing!


There were some surprises on the track back through the bush.   A moving and very appropriate memorial to Leicester Trewin had been installed on the track he developed and which is named after him.   (see below) 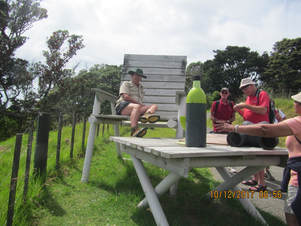 Nothing is as it seems - the giant's chair. Maurice is not a tiny person
​As we reached the high point of the walk the view out over Sandspit came into view and another surprise - the giant's chair complete with bottle, glasses and binoculars.     Sadly the resident donkeys at the end of the track - Xena, Hercules, Zeus and Zac - were in another paddock so we missed saying hello.    A final descent to the holiday park on the beach saw us back at our starting point.  Willpower was needed not to linger and explore the interesting collection of old buildings and museum items on display as we passed through the camp.
Having stretched our legs we were now eager to get to Warkworth and our Christmas cruise.     It was lovely to have time to relax and chat and we were very happy to have the company of several of our older long-standing members who are seldom able to join us these days.

After coffee and some yummy biscuits made by Wendy for morning tea, we left the premises where we had held our AGM and headed for Waikumete Cemetery in several cars.
Now in use for over 130 years, this is New Zealand's largest cemetery, at present covering 108 hectares.  Different areas are designated in the traditional manner, according to religion, with other sections designated as Maori and Pacific Island areas.  Large sections, however, are also designated for service personnel, including the NZ Police.
​ 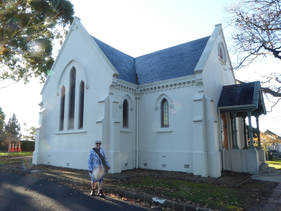 Margaret by the lovely Chapel of Faith in the oaks.
​​We walked in through the "back" gate, to stand under the oak trees and admire the lovely Chapel of Faith in the oaks and the sexton's house.  Waikumete grew over five years, as land was bought piecemeal by the Crown.  The Symonds Street Cemetery has been closed since  1908 and when the motorway was being built through Grafton Gully, some of the graves were moved from there to Waikumete.  Meanwhile, the cemetery actually lost some land when Great North Road was widened and other roads were built around the cemetery.  Later, houses were built adjoining the north- western boundary and the adjoining strip of land was turned into a nature reserve, so the houses were not directly behind burial land.
​We then walked down to the ANZAC memorial past some impressive gum trees on one side and soldiers graves on the other and were impressed by this unique memorial: it is the only one in New Zealand which had the Silver Fern motif on one of its faces.  From there it was a short way to the Erebus memorial where we heard the tragic tale of how Flight TE901 that left Auckland on 28th November 1979 ended. 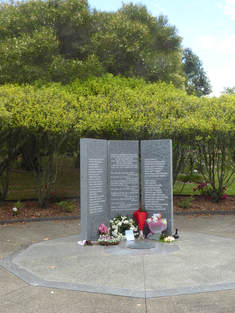 The Erebus Memorial, inscribed with the names of the unidentified people.
Erebus is a volcanic mountain in Antarctica and at almost 3800
meters (about 11,700 ft) is it well over a third of the height of Everest.
TE901 was a sightseeing flight that carried both New Zealanders
and tourists and when it crashed into Erebus in white-out conditions,               everyone on board was killed.  The wreckage was strewn so far that
not all of it was found even though many dozens worked to recover
the human remains.  Although “only” 213 victims were identified, this
was in the days when DNA analysis was very rare and the
investigating team of medical scientists who worked on the identifications
were awarded the Mt. Erebus Special Service Medal, albeit many
years later.

After a pause for reflection, remembering that the following day was
the anniversary of the Erebus Disaster, we had a short break for lunch.
Next we climbed a short way to go past the area with the children’s graves, a sad but colourful section with many flowers, toys and other mementos placed by the memorials.  From there we made our way to the Jewish Prayer House, with its unusual shape.  Walking back down again, we approached the “Quartermaster’s Quadrant,” another area with the graves of service personnel.  Here we mused on whether mankind will ever learn that war is no way to settle a nation's  religious differences.
A somewhat undulating walk then brought us to the section where the victims who died in hospital during the flu epidemic of 1918 had been buried.  Mass graves must have been used here, for the area could not possibly contain the number of individual graves that would have been required.
After all that, it was it was not quite so gloomy to walk through the mausoleum area, where we could recognise some of the family names well known in West Auckland and many connected with the wine trade.  The best view of Auckland City was also to be seen from this area.
​
​Finally, we approached the wildflowers, which by now were growing in great profusion in the areas designated for the purpose.  Here we found a few species such as ixias and watsonias as well as the "native carrot" Daucus glochidiatus, sometimes called Queen Anne's lace and Centranthus ruber (valerian), the latter growing profusely only in one small area.  Both ox-eye daisies and smaller daisies also grew everywhere in between.  By now the heat was increasing, so it was lucky that we had completed the circle back to our cars.
Thanks to Molly for organising the AGM, Wendy for supplying morning tea and
Margaret and Praemi for leading the walk.
Text: Praemi   Photos:  Katherine and Don.
​ 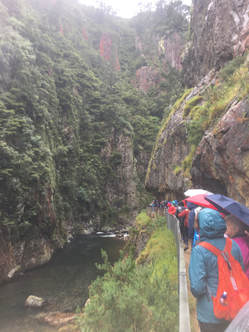 Dramatic views beside the river
​


​Another very enjoyable Sunday with the club.   This time we went to the Karangahake Gorge between Paeroa and Waihi.

Our walk took us over a couple of suspension bridges and alongside the Waitawheta River on a track probably carved out of the rock gorge during the gold mining era of the 1880's.

The Talisman Mine entrance can be seen from the track plus remnants of the train track and other paraphernalia left over from that time. 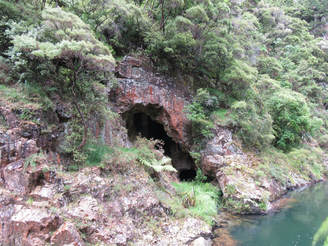 Another mine entrance seen clearly from across the river
​We then followed the Crown Track through the bush until we reached the Waterworks Tunnel where the plan for the B group was to soak our feet in the river for a bit before heading back,  but the weather wasn't conducive to that. However  we had an enjoyable lunch watching the water raging past before heading back to start on our walk on the Rail Tunnel Loop.

This time we walked beside the Ohinemuri River until we reached the rail tunnel which is 1.3km long and made up of over 1 million handmade bricks.     The inside of the tunnel is beautiful to see and the engineers of that time (1903) were indeed very talented.

Another suspension bridge to cross then down past more remnants of the mining era and back to the bus. 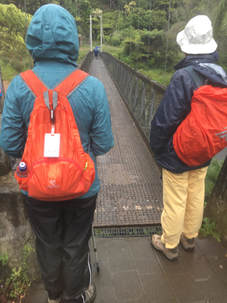 Only a few people at a time allowed on these bridges. Waiting our turn.
Meantime the A group  continued on through the waterworks tunnel with dripping water and a starry twinkling of glow worms overhead.  Torches a must!!

​Onwards to the Dubbo Track, we soon found it was actually onwards and upwards - a good workout with some steep bits, rock-hopping stream crossings,  a good measure of mud and some beautiful bush.   Again several mine entrances and relics to be seen.

It was sobering to see the entrance to the new mining operation, the New Talisman mine with stark Danger No Access signs blocking the road.   We followed the County Road track then Scotsman's Gully track back to the bus.


​
​
​Thanks to John and Anne, our leaders for the day and to Don as well.     Also to those who helped so much at the stream crossings. ​
Text:  Anne,  Sharleen       Photos: Katherine, Sharleen 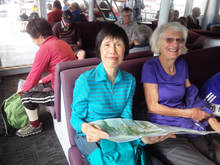 Spring and Vivien on the ferry
​
This was a wonderful day out which everyone enjoyed.
The Te Ara Hura walkway  covers a variety of walks in four areas of Waiheke Island. The Forest Heart part goes from Rocky Bay through the Whakanewha Regional Park to Onetangi and is known as the coast to coast.

​A group of thirty travelled by ferry and bus to Rocky Bay where the walk commenced at the Omiha Bay end. We walked up Omiha Rd then via the Upland Road track to Dotties Lane which led to a dotterel breeding ground on the shore of Rocky Bay. Besides dotterels, we spotted pied stilts, oyster catchers, banded rail and paradise ducks. 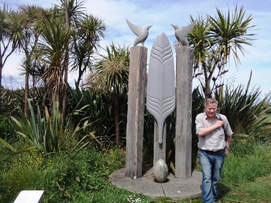 Don and the striking sculpture near the dotterel breeding ground
Next was a walk along the Nikau track where there was wonderful bush, especially majestic groves of nikau. Then it was on to the Tarata track and finally the Mamaku track where we had four small streams to cross.  As usual there were plenty of helping hands so we could rock-hop across safely!   Early afternoon we reached a road which we needed to cross to continue the track walk.  An interesting distraction at this point however was a side trip of about ten minutes to a winery to admire the view over Waiheke and parts of the Hauraki Gulf.   No wine was consumed ! 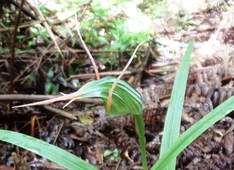 We found a few greenhood orchids
The final part of the track was another example of the superb bush that Waiheke Island has. We came out just before the Eco Zip flying adventure and had more wonderful views across from a reserve nearby,  with the sky tower and Rangitoto in the distance.    The sun was shining, there was no wind and it was warm.  So good.
​
A noticeable feature of the bush was the variety of bird song – grey warblers, tui, kingfisher and sky lark were some that were heard, also kereru, NZ wood pigeon,  were spotted.

We completed the walk with a meander down through suburbia to Onetangi where we caught the bus back to the ferry.
Thanks to Janet and Joan for this very enjoyable walk, not an easy one to organise.
Text:  Joan
Photos:  Sue