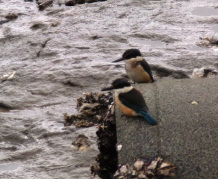 Kingfishers - just sitting about!!
A group of thirty-one left from the Pakuranga Town Centre to walk along the Tamaki River Walkway to Musick Point.   There was a very interesting stop to view the ignimbrite deposits, now thought to be over a million years old and to have come from the great Taupo eruption.  It was onwards and upwards to the top of Pigeon Mountain for a great view then down to Half Moon Bay and Bucklands Beach Yacht Club for morning tea - scones, muffins and coffee as our mid-winter treat courtesy of the club.    A bit further on at Little Bucklands some boarded the bus and the majority walked on to Musick Point where we had lunch.   Then it was back on the bus, on to Shelly Beach and the start of
the Mangemangeroa Track, a lovely example of coastal forest.  Some chose to bus to the end of the track and meet us at the barn, enjoying the views while they waited in the sunshine.
Hannah and Elane led this walk and Hannah reports that organising this walk made her realise what hard work the wonderful leaders of previous walks have done and how much forward planning goes into these trips - especially finding sufficient toilet stops!
Everyone enjoyed the day - a big thank you to Hannah and Elane.

Gifted to the ARC by Pierre and Jackie Chatelanat, Atiu Creek Regional Park was officially opened in 2008 and at 843 hectares, it is one of  Auckland's largest parks.

We were blessed with the most amazing weather - clear blue skies with an autumn crispness which, in turn, gave us breathtaking views of the Kaipara Harbour at its best, surrounding farmland with animals, mangroves, native bush, pockets of various tree plantings, and this was from the carpark.

After being greeted by the two resident roosters, both 'A' walkers (Oruawharo River Trail) and 'B' walkers (Reservoir Walk) set off along one of the farm roadways which made for very easy walking for the whole day.   Splitting at the first junction the 'A' walkers continued across farmland, dodging cow patties and sheep pebbles, to reach an elevated area of the farm where there was evidence of a couple of pa sites.   Next stop, Rua's gravesite, Atiu's famous Huntaway sheep dog's grave, and behold one of the most amazing views of the harbour's Oruawharo River estuaries, Solomons Bay and the carving Oweka Tapu Pou.

The 'B' walkers, after cutting across an uphill shortcut and climbng several rickety locked gates, stopped at Rua's resting spot for lunch, relaxing and appreciating the view.  We then met up with the 'A' walkers at their lunch stop.

Lunch at Solomons Bay gave us the chance to experience an artists view of the mangroves and surrounding farmland and birdlife via a view board at the shore edge, plus a glimpse of a fish nursery with juvenile fish flitting around at the shore edge.

Next stop, the reservoir, which is home to black swans, paradise shelducks, mallards, grey ducks and dabchicks.  All of the above birdlife managed to keep themselves at a distance on the other side of the reservoir, however with our modern cameras and the odd eagle-eye we managed to enjoy their antics.   From the reservoir, a steady climb to the carpark, bus and a feathery farewell from the resident roosters.

Thank you Lynne and Brenda for a lovely day. (This was Lynne's first time leading a walk - Congratulations on a job well done and we look forward to your next walk!)

Natural History Meeting 25 May 2014: The History of Huts

Jessica talked to us today not just about tramping huts, but all sorts of other huts as well.  The history of New Zealand is full of tales of enterprise and effort and often people (mainly men) worked in quite isolated areas.  So it was hardly possible to commute to work!  This meant that one man would often be living in isolation for months, so that he could perform some vital task that enabled a project to keep making relentless progress.

Sadly, many of these huts have succumbed to the ravages of time, having been built with whatever material was readily available at that particular location: wood and stone were the most common.  However, a few huts have been restored and are being maintained by groups of enthusiasts or by the Department of Conservation.


Thank you for a fascinating talk, Jessica.

This was a lovely walk beginning in Parnell and finishing at the Michael J. Savage Memorial, Bastion Point on Tamaki Drive. We wandered through  the grounds of St Stephens Chapel, a Selwyn church built in 1857, through Awatea Reserve and on to the Freda Kirkwood walkway by the shore.    The walk around Orakei Basin was especially enjoyable and we spotted oystercatchers and shags as well as the odd fish leaping from the water.   We climbed up and over Paratai Drive admiring the views and the impressive homes before continuing on along Tamaki Drive.  Disappointment that the ice cream shop near Kelly Tarltons was not open turned to delight when we found the Mr Whippy van up at the Michael Joseph Savage Memorial!  A lovely way to finish the day.

It was great to have several new walkers with us on this trip - a big thank you to John for stepping in to lead this walk in Janet's place.