​It sounds a bit of an odd plan to go walking in a business park, but when you realise that 40 hectares of Highbrook Business Park is devoted to recreational walking tracks, open green space and modern landscaping, it starts to make more sense.
​ 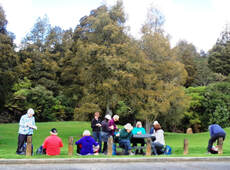 It was  peaceful except for several aircraft that flew over while we there, but the birdsong in the trees made up for that.

​​Morning tea was a leisurely affair in the sunshine before
we headed off to Highbrook Park and its enviable location
beside the Tamaki Estuary, the Pakuranga Creek and
the Otara Creek. 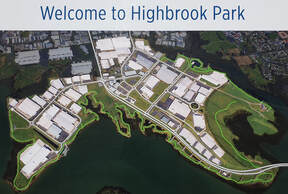 Highbrook Park
​
​Described as one of New Zealand’s largest and most advanced industrial and business parks, Highbrook was formerly the home of Sir Woolf Fisher’s Ra Ora horse stud and now houses 100 businesses and is the workplace for 5000 people.    Its design has won several prestigious international and New Zealand architectural and landscaping awards.
​Our walk began at the end of Waiouru Rd and we followed the gravel pathway around the end of the peninsula, detouring partway to take in The Crossing which is at the heart of the development.

Here we were delighted to see Marti Wong’s Red Bull sculpture created out of recycled scrap metal and ancient Chinese coins.    A sunny and sheltered spot with very upmarket restrooms conveniently open, it was the perfect lunch stop.

​Next we made a quick stop at Fisher House, the former family home of Sir Woolf Fisher and his wife, now a restaurant and bar.   We learnt a little about this great New Zealand industrialist and philanthropist.

We rejoined the walkway at Pukekiwiriki Rd,  passing by a pair of spur-winged plovers noisily protecting their family,  some ever so cute ducklings on the settling pond and a group of model plane enthusiasts at their club airstrip within the ancient Pukekiwiriki crater rim. 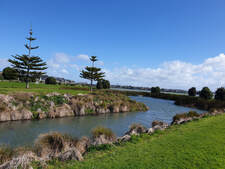 ​​The walk ended by winding alongside the Tamaki Estuary on one side and the dual carriageway of Highbrook Drive on the other, separated by the distinctive and minimalist landscape design of trees gravel, rocks and wetland ponds.

Thanks to Jennifer and Sharleen for putting this new walk together and arranging sunshine for us!

​
08 September - Duder Regional Park & McNicol Homestead
Unfortunately this trip had to be cancelled due to ground conditions and weather forecast. It will be rescheduled for next year. 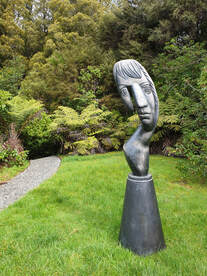 Terry Stringer/Benediction
​
​After enduring two weeks of foul wintery weather, 36 adventurous souls took a punt on the weather and walked the walk. They were not disappointed. The last Sunday of winter 2019 was bright and shiny with NO wind.   Spirits were high.


​Highfield Garden Reserve at Algies Bay is a special garden for a family of seven donkeys, gifted to the people of Auckland by Ted and Alison Roberts.  Firstly,  we had to walk along Snells Beach at low tide, climb Gerontius Steps up a cliff face onto the Reserve.  Here magnificent sea and island views welcomed us. 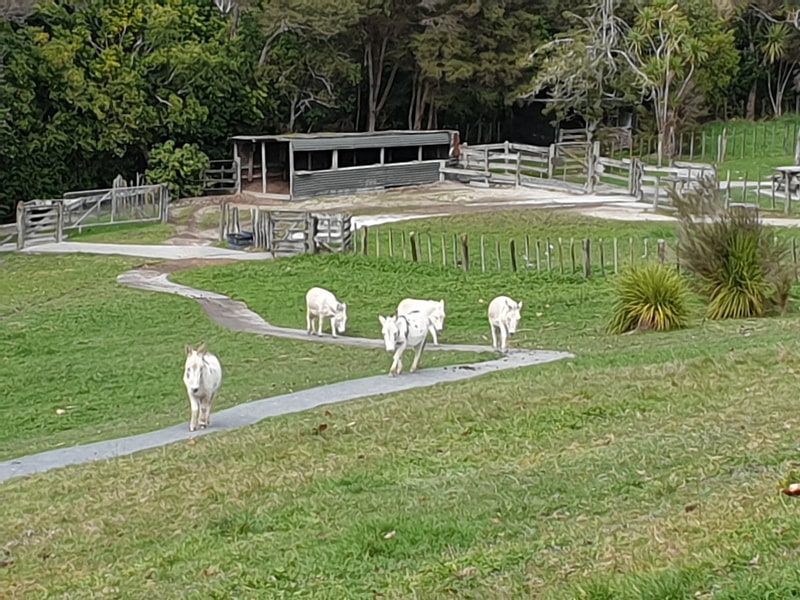 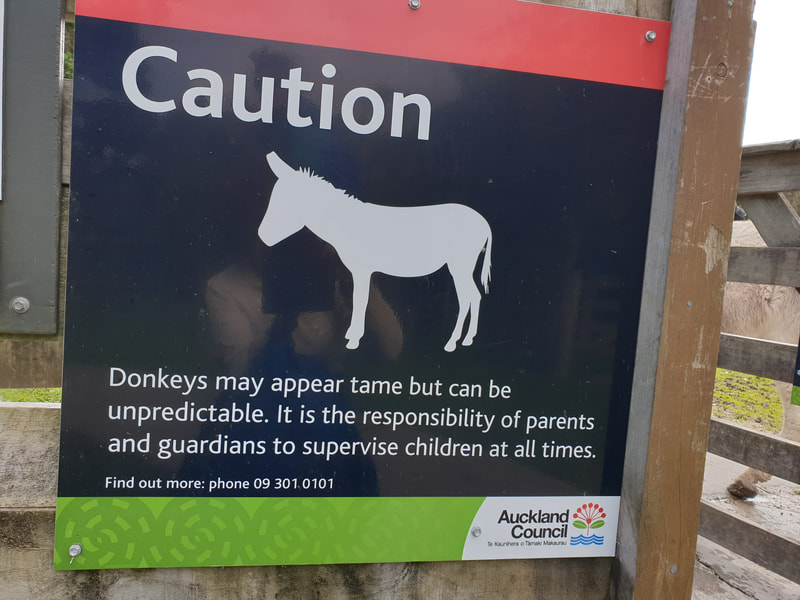 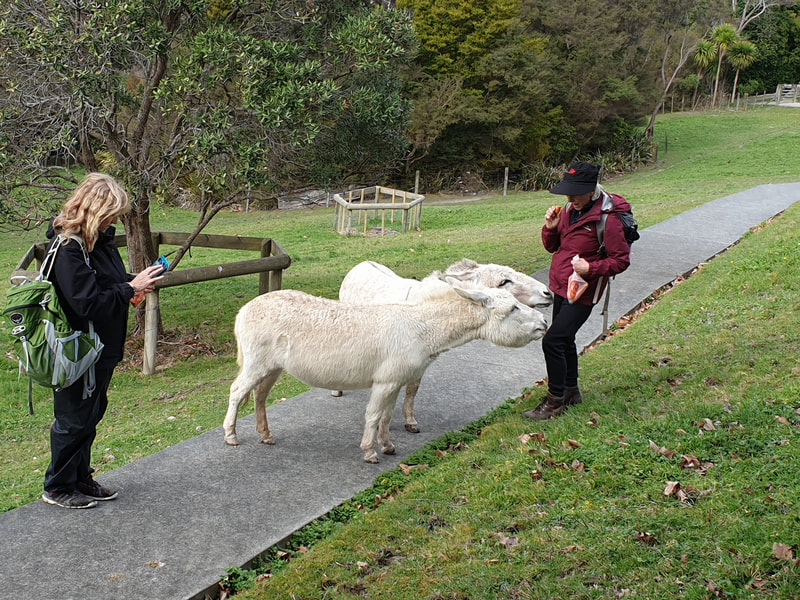 Donkeys are smart!    Noticing we were not going downhill to feed them their treats of chopped carrots, apples and silver beet,  the leader lead his team uphill to us.

It was a most delightful sight, not witnessed by many people - watching a row of donkeys, in single file, slowing walk up the concreted path towards us. 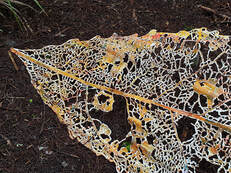 We took a bush track down to Algies Beach where lunch was taken in style.

​​Then, the vino - at Brick Bay Wines and Sculpture Trail. This is a 2km boardwalk outdoor gallery with over 50 contemporary sculptures  through a peaceful native landscape, including a wonderful grove of kauri. 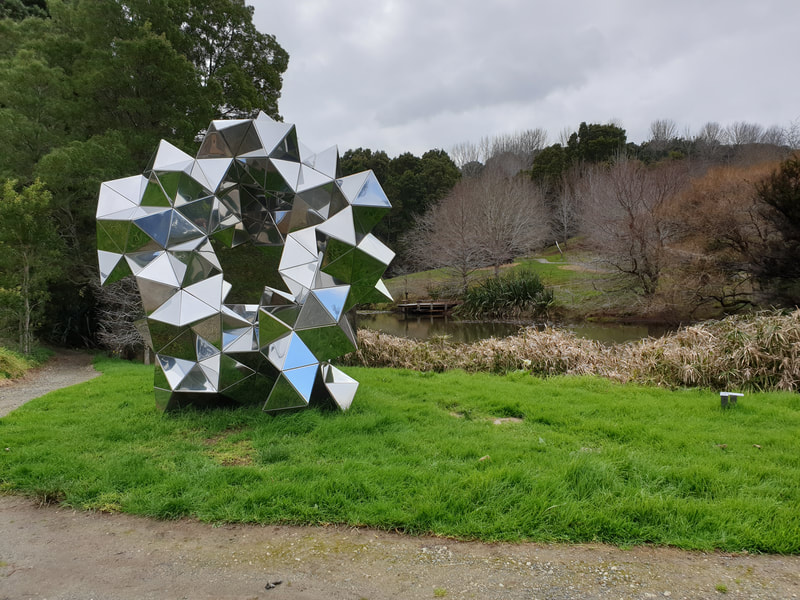 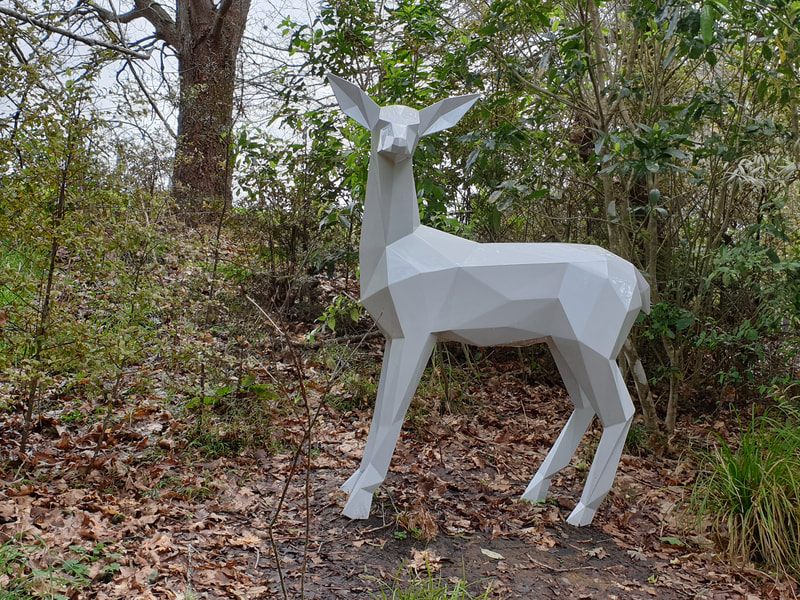 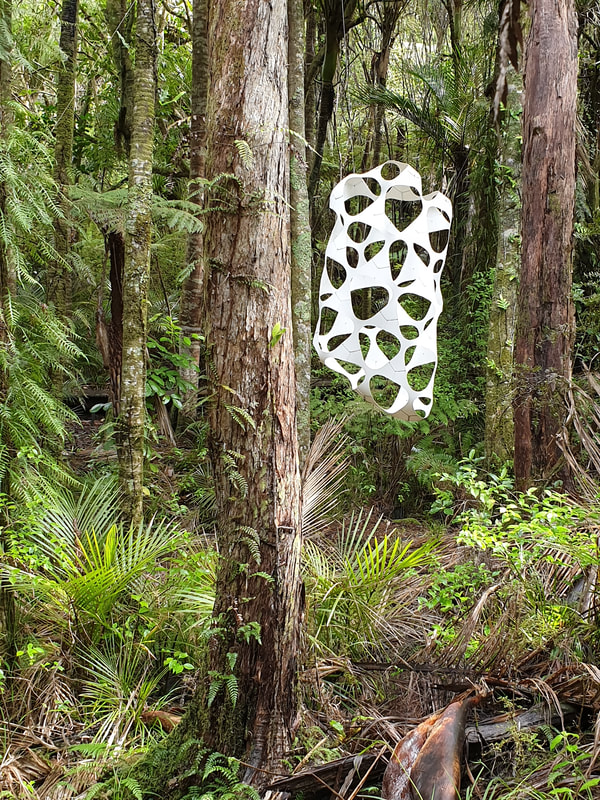 ​ A "Happy Hour" of coffee tasting and wine tasting was enjoyed by walkers, in the lounge floating above the lake.  A wonderful fun time.

Yes,  the day was a bit different, but a little reward and treat now and then is great for the soul.

11 August  -  Luck at Last Mine, Coromandel
​It was “luck at last” for us too!  We weren’t able to undertake the walk 18 months ago because of unexpected logging activities.  And, this trip was also looking very doubtful with severe weather predictions over the previous few days, and even on the morning of our departure.

​However, 22 hardy souls headed south on what turned out to be a dry, but mainly overcast day.  ​Our coffee stop today was at Cornerstone Cafe - and after another hour on the bus, we turned off Highway 25 into Taungatara Road – a metal logging road running through a section of the Tairua Forest.  Three kilometres down a rather bumpy, slippery road (well done, Oki!), we found the start of the track to the Luck at Last Mine.

​Hugging the side of the Wharekawa River, we headed into the mainly pine forest where we found an old carriage way, a floor of pine needles cushioning our feet.  Carter Holt Harvey took over management of the forest in 1989 and their emphasis was on harvesting and replanting Pinus radiata (radiata pine), still very apparent today.   High rainfall and mild winters make for luxuriant forest growth in this area.

We spotted several examples of putaputaweta (Carpodetus serratus) - other common names being marble leaf and bucket of water tree.   The Maori name "putaputaweta" means "many wetas" and refers to wetas living in the holes left by puriri moth larvae. The name "bucket of water tree" was used because the freshly cut timbers were so sappy it would not burn easily.

Cyathea dealbata, commonly known as the silver fern or silver tree-fern, or as ponga or punga, were also prevalent. Kahikatea seedlings (Dacrycarpus dacrydioides) were spotted in numerous situations along the edge of the track. 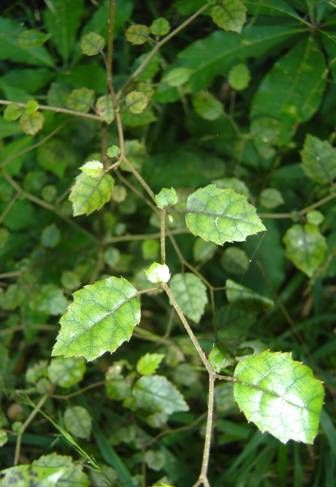 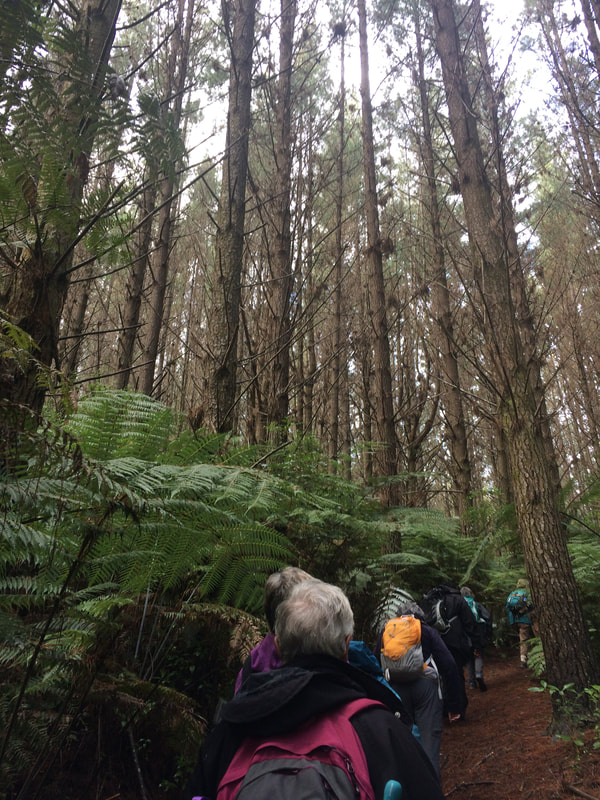 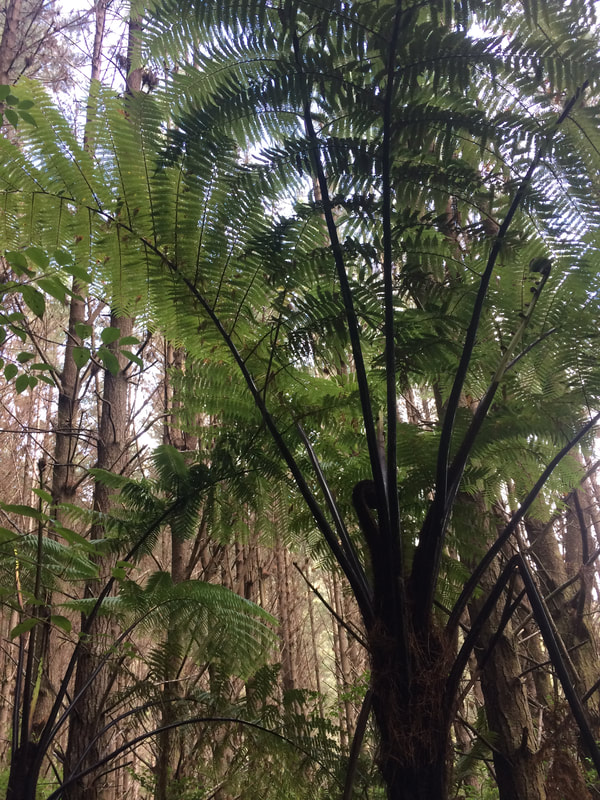 ​The terrain was undulating and provided good views of both the river and the valley.  Three rocky stream crossings, and a “wooden hurdle” were the only small challenges along the way. 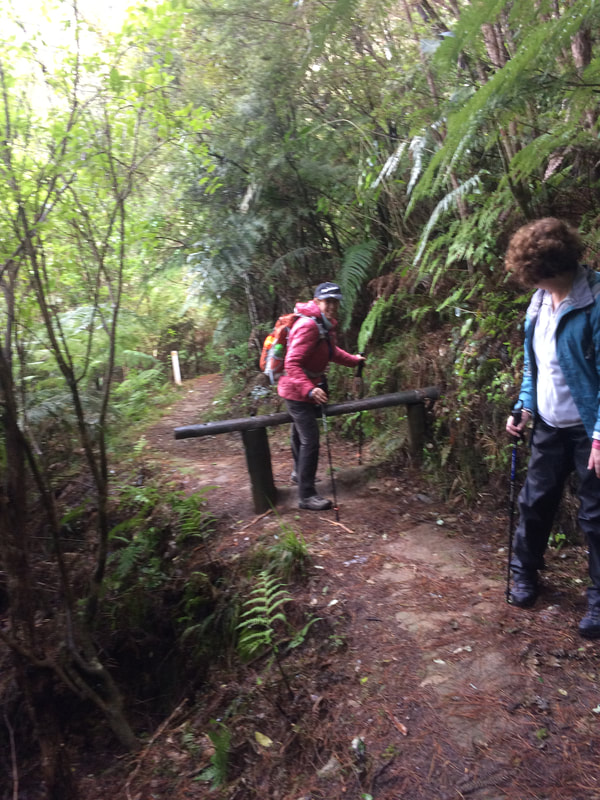 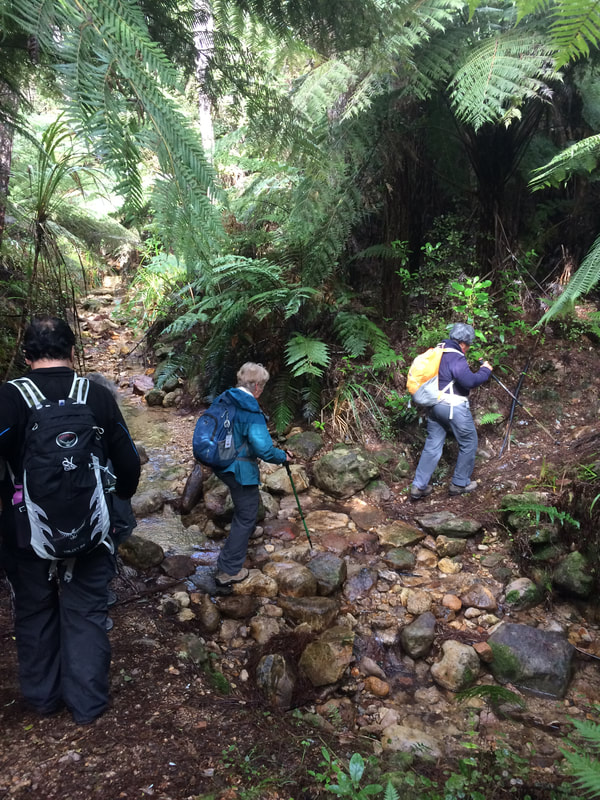 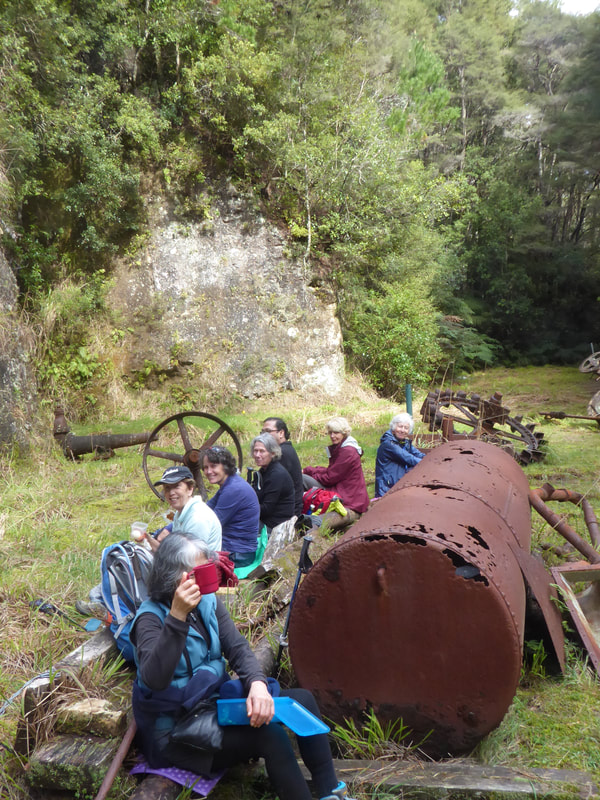 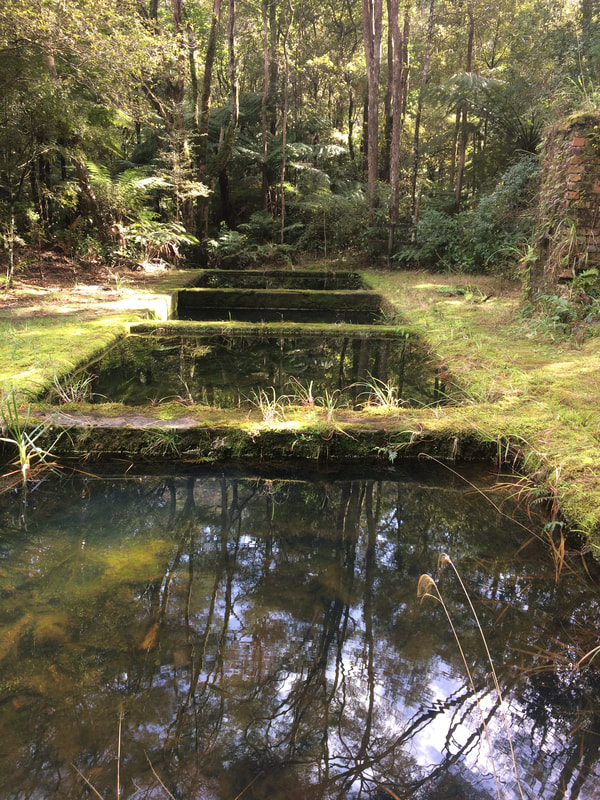 ​We retraced our steps and, just 2 minutes prior to arriving back at the bus, we felt the first small drops of rain.  However, our boots were off and we were all back onboard before the rain really set in.  A “lucky” end to a very pleasant and interesting walk!  After a brief stop at Bugger Café, we arrived back into Auckland around 5pm.
Thanks to our leaders, Molly and Linda, and our photographers, Molly, Praemi and Linda.  And, a special thanks to the 22 walkers who didn't let the weather get in the way of boarding the bus that morning!