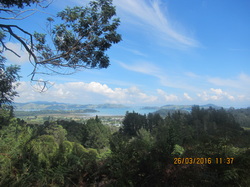 View from Whangapoua Lookout
Friday 25th
The Coromandel Peninsula is regarded as a top beauty spot  and holiday destination in New Zealand.    It was our turn to see for ourselves, to explore some of the forest areas, beaches and other attractions and to have some fun!

With our bus loaded to the gunnels and  a trailer crammed with luggage as well, 28 of us headed onto SH1 (along with half the population of Auckland it seemed).   It was a relief to break the journey at Thames where we were met by Dave Wilton who guided us around the William Hall Memorial Arboretum, which is cared for by local Forest and Bird members.  This, one of the first arboretums in New Zealand, contains many trees planted by William Hall including the Hall's totara (Podocarpus Hallii) named after him.  He was a pioneer conservationist and amateur botanist ahead of his time.

We journeyed on to Coromandel town, arriving a good two hours later than planned and, after unloading food and luggage, set off to do an orientation/historical trail of the township's lovely heritage buildings, some of us more successful than others at following the printed guide as house numbers seemed to vary wildly!

Following Happy Hour, smoked chicken and salads were hungrily devoured for dinner (thank you to Praemi and helpers). 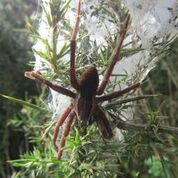 Rather scarey!
Saturday 26th
Cloud was drifting about the top of the Coromandel Ranges this morning before we began our drive to the Whangapoua Lookout for views out over the coastline and town.   Then it was down to business - the Kaipawa Track up into the hills and the Success Track back down, supposedly a 3 hour walk.  However the recent stormy weather in the area had left its mark and we were slowed down with debris on the track and slippery conditions on the descent, all this adding a lot of extra time to the walk.    A great variety of colourful fungi and menacing enormous nursery web spiders distracted us and were a good excuse to stop and take numerous photos.   We were thrilled to see immaculate new signage on these tracks as back in December when we did the recce, the signage was almost non-existent and at best misleading.  We had communicated this to the local information centre and wonder if our feedback (and that of others no doubt) may have sped up the installation of these great signs?

New Chums Beach on the east coast was our next destination and we timed it well for low tide. This beach was recently named one of the top 20 deserted beaches in the world and is highly rated by Lonely Planet and National Geographic.   However it was far from deserted on Easter Saturday, the "accessible only on foot" route being more like a main highway!  Many had made the trip first paddling across the stream at the end of Whangapoua Beach, then a rocky scramble for 10 minutes and a walk along a rough track, up and over a small headland, and finally emerging from a lovely nikau and pohutukawa grove onto the sandy beach.    We didn't quite get the anticipated deserted, pristine, sparkling water experience as there was a mysterious red algae on the sand and in the water.  However the romantics among us were delighted to witness preparations for a beach proposal - picnic hamper, flowers, and we were told - an engagement ring!

While most of us were at New Chums Beach, the B walkers went to the other end of Whangapoua Beach to Opera Point Reserve and wandered along the estuary side track and onto the beach, reaching the well-known hole-in-the-rock as well.   There are great views of the harbour and Castle Rock from this area.

We returned to Coromandel along the winding Whangapoua Road that threads its way across the peninsula and through dense native forest and pine plantations.   A welcome meal at the Admirals Arms Hotel awaited us
Sunday 27th
The tracks in the Waiau Kauri Grove on the infamous 309 Road are some of the most tranquil to walk - the smell of the damp forest floor, mighty kauri towering overhead and the continual sounds of the stream and waterfalls have a magical effect.  The stars of the reserve are the Siamese Twin kauri (actually two trees fused together) and the stunning grove seen from the platform a few minutes into the track.    We lingered longer than planned here, no-one seemed to want to leave, however The Waterworks theme park a little way down the road was beckoning.

Ninety minutes of fun, frolics and food - a chance to be kids again.  One of the quirkiest theme parks in New Zealand, 70% of all the "inventions" have been made from recycled materials  www.thewaterworks.co.nz
What a great place it would be to take the grandchildren to.

Long Bay and the Kauri Tree loop walk were next, a well-maintained track with species along the track named.  Just a short walk, extended a little by returning along a scenic coastal track from Tucks Bay.  And finally a short drive up the coast on the Colville Road to the tiny settlement of Papa Aroha (Beloved Land) where we found a hidden gem of a coastal forest walk.  Pohutukawa, kohekohe and puriri  were dominant here; wonderful ancient and gnarly specimens, the pohutukawa forming archways across the track and the puriri housing insects in the holes the puriri moths had vacated.  We even found an empty casing left behind by a puririmoth.

All feeling a tad weary by now, we were driven back down the coast, watched by numbers of shags doing what they do - sitting on rocks!    Another happy hour, another swim in the motel pool for some and then a wander across the road to our Sunday roast at the Coromandel Hotel - best ever roast pork and apple sauce followed by decadent and very generous servings of a chocolate confection!
​

Thank you Joe
​ Monday 28th
No energetic walks today but a fascinating visit to the famous Driving Creek Railway (DCR) and Potteries, the brainchild and life's work of Barry Brickell.  Barry, who sadly died earlier this year, has been described as a  "potter, kiln builder, practical visionary, engineer, steam buff, environmentalist, railway enthusiast, workaholic, amateur botanist and helper of hundreds". (poet Kevin Ireland).  DCR and its sanctuary is his legacy. www.drivingcreekrailway.co.nz
​
Our one hour journey on this amazing narrow-gauge railway took us over viaducts, through tunnels, around torturous curves and out onto nerve-wracking reversing platforms, delivering us at the top to marvel at views as far away as Auckland  from the Eyefull Tower (love the play on words).  Quirky clay sculptures, tiles and well-labelled native trees and plants line the route and an excellent commentary gave us just the right amount of information.  A tour of the conservation area (predator-proof fencing) and a quick look at the art gallery concluded our visit.

Unfortunately it was time to head for home and start planning for the next weekend away!
Many thanks to our ever-so-reliable and good guy driver, Joe, who took the narrow, winding Coromandel roads in his stride.  Thanks to everyone who helped in big and small ways to making an enjoyable weekend away and thanks to Praemi and Sharleen for organising and leading the weekend.

Mangawhai dunes - what a fabulous view.
A message from Brenda, one of our leaders on this trip:

"Before I write my report, I would like to acknowledge our hard working committee.  Without these members the club would not attract and retain new members. Thank you to all of you."

It was a very clear sunny day, we welcomed 42 people, some regular members, others were members who had not been out with us for a long time,  plus we had 10 people either on their first, second or third walk.

Our first walk was to be the Troubadour Trail along the estuary - cliff and sand.  Due to the fast incoming spring tide we quickly became A and B walkers. The A group took on the challenges of rocks, water and sand. The B group walked the roads, having fantastic views of the sand dunes, Hen & Chicken Island plus the Whangarei Heads.
Both groups met for lunch and for the lucky ones a swim at the boat ramp, where the bus came to take us up to the Heads Surf Club.

The A group took on  climbing the Goldschmidt Track, which had three short sharp hills. While catching their breath they were able to enjoy the spectacular views of Cape Rodney plus the Poor Knights to the north and to the Islands to the South.

Joe, our friend and trusted bus driver,  invited us back to his new abode for afternoon tea, dutifully prepared by his “team” Lynne, Karen and Yuki.    Many thanks to them for this wonderful treat.
Leaders for the day were Lynne Van Uden and Brenda Berryman - thank you.