For this trip, as we often do, we divided into two groups - the A group of "fit and fast" walkers, and the B group who still wanted a good walk, just not up a mountain!

Ten of us took the ‘A’ walk, anticlockwise around Mount Karangahake. We walked through Scotsmans Gully Track and climbed the Karangahahe Mountain Track to  the trig turnoff. From there it was a flat walk across to a point with views to the south and east. A few of us continued on to the trig and could see our bus far below. We walked down via the No. 7 Level track which had an easy grade but was cooler as it was on the south side of the mountain. We saw several examples of the world's tallest moss, Dawsonia Superba, at the bottom of the track.

The B group enjoyed a journey back to the 1890s, the days of goldmining in the area when there was a thriving community here - homes, a pub, school, shops, all based around the extensive network of goldmines inside Mt Karangahake.  We were able to explore the ruins of the Crown, Woodstock and Talisman batteries, hearing how the gold bearing quartz had to be crushed and treated to etract gold and silver.   Our own "mine of information", Des, detailed the revolutionary cyanide extraction process and the story of the success and eventual decline of the mines.  Our walk took us through the 1km old railway tunnel with its dim lighting, making way for the odd cyclist, and along part of the Karangahake Gorge Historic Walkway and crossing the Ohinemuri River we followed the route back to the site of the Talisman and Woodstock batteries.  A lot of clearing and construction of steps now reveals more of the ruins. After lunch we set off  on the well known Windows walk.  Later we walked alongside the river, white water crashing through the enormous boulders.  Back at our bus there was time for a relaxing coffee at the local café.

Thanks to Des and Don, Janet and Anne for a great day

Waitakeres: Montana Trail
06 August
It was a good day for “botanising” for the nineteen members who braved the cold to come on out to the Waitakeres.  We started our walk by spraying our footwear against kauri die-back disease, then went along the Auckland City Walk to reach the Pou at the start of the Montana Trail.  This is a well- marked loop track used by so many that it is better maintained than many others in the area.

The botanical high points were finding young kahikatea and young miro, a number of Kirk’s daisies, green hooded orchids, native broom and superb examples of dracophyllum along different sections of the track.  The first two were particularly welcome sights, as the presence of these young plants indicated the success of the poison traps used in “The Ark in the Park” over several years, by armies of dedicated volunteers.  Fewer predators equates to more birds available to eat and then spread seeds.  We saw kereru, fantails, silver-eyes and tui, but know that kokako, stichbirds, robins and tomtits abound in this area.

The first part of the track was a harder climb but after a stop for morning tea, it was easier and we soon reached the highest point “Simla,” the location of a farm in the past.  Then it was downhill, so we kept going as far as the Waitakere Dam before stopping for lunch.  Along the way we had seen three types of lycopodium.

Walking back over the dam after lunch we paused in the middle to admire the magnificent, untouched bush lying there in front of us: the rewarewa (Knightia excelsa) standing guard over the rest of the bush, the luscious green of the rimu glimmering in the sun, the conical tops of the kauri higher than most other mature trees.  At the end of the dam, we identified rewarewa, kauri, rimu, dracophyllum and pate among many others.

Our final stop was by the very impressive kauri at the far end of the Auckland City Walk and we identified another eight or ten native species there.

Before coming out from the bush we cleaned and sprayed our boots, as we had done at every spraying station provided along the way.  Who wouldn’t, after seeing the sorry sight (earlier that day) of a giant of the forest dying slowly, affected by phytophthera?

Thank you, Donald and Anne, our leaders on this very rewarding walk in the Waitakeres. 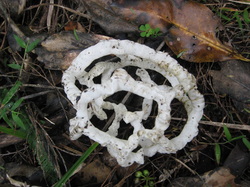 Basket fungi, Stinkhorn family
It was on an overcast morning that thirteen of us A walkers set out on the Okura Bush Walkway from the southern end of Haighs Road to Dacre Cottage.

The track, which was in good condition, took us through regenerating coastal kauri and areas of nikau palms along the Okura estuary and the edge of the Long Bay - Okura Marine Reserve.

After a stop for morning tea, we walked around the coast to Dacre Cottage via the low-tide route.   We had an early lunch at the cottage shortly after 11am.   A bonus was that one of the volunteers that looks after the cottage and surrounding area opened up the cottage for us to have a look inside.   One could only imagine the tough living conditions in the 19th century as the cottage is only one room with a fireplace, a bed and a table.  Dacre Cottage was built in the 1850s by Henry Dacre, son of the retired sea captain Ranulf Dacre who bought the Weiti block in 1848.

We were also told about the breeding habits of the oystercatchers and dotterels nearby.  These birds have areas closed off for them close to the shoreline.

After lunch we returned, this time walking the complete track to Haighs Road.  The terrain was undulating in parts and featured around 700 steps in total, all in very good condition.   We were really proud of managing these steps!!

A smaller group of B walkers also walked a good part of the track and spent time looking at plants.  They found native broom and plenty of basket fungi.  The birdsong heard included tui, kereru and fantails.

Just as we returned to the bus the rain started so we felt very lucky that we had no rain on the walk.

Thanks to Molly and Joan for organising this lovely walk. 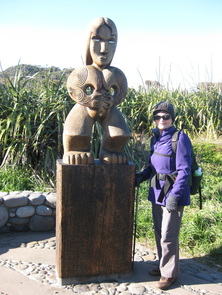 Marilyn with Hinerangi
It was a crisp, frosty morning outside but warm and toasty in our bus as thirty of us drove out to the west coast heading for Log Race Rd, off Piha Rd.  A quick look around the site of the WWII radar station and an inspection of an unusual variety of Pseudopanax which Praemi had spotted, and we started out on the coastal side of the Mercer Bay Loop track.   Our plan was to walk part of this track then join the AhuAhu track, lastly turning off onto the more rugged coastal Comans track taking us down to Karekare.  Our B group walkers stayed on the AhuAhu track all the way to Karekare, this being a much easier route (meaning it is minus the tree roots and rocky scramble of the Comans track).

The west coast can be wild and dramatic in rough weather (but exciting!), however today we walked under cloudless blue skies and there was no wind to whip the hardy flax bushes. The views were spectacular from the many clifftop lookout platforms along the route.  We admired the pou depicting Hinerangi and read the tragic story of her vigil for her husband lost at sea - many of us could see her profile on the rocky bluff above Mercer Bay.

Walking at times on the cliff edge and at times in native bush, we eventually emerged at Karekare in time for lunch.  There was a chance to explore the area, marvelling at the sharp cliffs of The Watchman and then  walking further along the beach made famous as the location of the NZ film "The Piano".  Here we found rusty iron spikes poking through the black sand, remnants of the Piha-Whatipu railway which transported kauri logs and timber from the valleys along the coast to Whatipu for export last century.
A reminder of the past of this area, as was the glimpse of historic Winchelsea House, built in 1889, and now restored to its former glory.

We finished off with a few minutes walk up Lone Kauri Rd to see the spectacular Karekare Falls, one of the more notable waterfalls in the Waitakeres.  Finally, back on the bus, we held our breath as our driver tackled the very narrow and winding Karekare Rd, then on home to Auckland.

Thanks to Sharleen and Anne for this walk, also to Praemi for leading the B group.