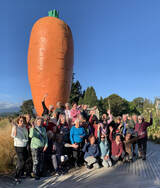 Thirty-three club members all had our fingers crossed for a couple of weeks before this trip - would we be in Covid Level 1 and able to get away, or would we have to cancel our plans?      We were in luck and gleefully escaped down the island to the mountains!

Here are some of the highlights of our four days away.

DAY ONE : Auckland to Ohakune
​​

​A lovely leafy 30 minute walk on an easy path around this lake in the centre of Cambridge.  It was a handy chance to stretch our legs and look for the black and white Australian coots that live here along with lots of ducks and pukeko.      We were not happy to learn that the coots can be very aggressive to their young.

“Stroll along the boardwalk through an acre of manicured grounds, past amazing glass flowers and a cascading glass waterfall”, the brochures said, so we did.  Lava Glass had a unique glass sculpture garden and gallery of glass art, all the work of award-winning master glass artist, Lynden Over.   The lovely café was open but sadly the glass blowing studio was not operating today.   The garden is landscaped with a mix of exotic and native trees and plants and the glass art is both beautiful and quirky to appeal to young and old.

​
Spectacular Taranaki Falls tumble 20 metres over the edge of a large lava flow but appear to come out of nowhere!   The track is a 6km loop which has its start and finish behind Chateau Tongariro and has an upper and lower route.  It is generally an easy walk apart from the 100 steep steps beside the waterfall. 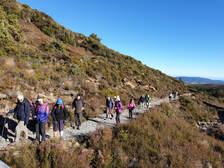 Expansive views of the countryside on this blue skies day were to be remembered, as was the sight of the Chateau, once New Zealand’s grandest hotel and a part of the history of this Dual World Heritage Park. 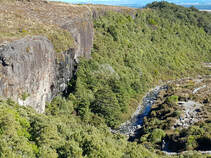 ​​It was late in the season for alpine flowers and many species were no longer in bloom.  The most prolific was the white gentian (Gentianella bellidifolia) with its reddish foliage.    Small patches of introduced heather were also in bloom.  Although pretty, they are a reminder of an ill-conceived plan to introduce grouse-shooting to the National Park over 100 years ago.  The grouse died but the imported heather survived to threaten our native plants.
​Trivia -  We loved the loo situated above Taranaki Falls  - the most picturesque ever (both location and wall murals!)    Photo to come. 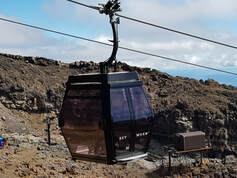 With luck on our side, the Sky Waka gondola re-opened after a maintenance shutdown just in time for us to enjoy this new experience on the mountain.    Only opened in July 2019, and New Zealand’s longest gondola and highest restaurant, few of us had visited here before.  What a logistical nightmare it must have been to construct.

We glided silently past numerous ski and tramping club lodges and snow machines, rocky bluff after rocky ridge, finally emerging from our glass capsule 2,020m above sea level.
From the top there are two walks, both poled routes and neither for the faint-hearted:  the Skyline Ridge and the Waterfall Descent.   Walking poles would be a must.   We opted to enjoy the delicious buffet lunch and soak in the dramatic views back down the mountain through the floor to ceiling glass windows and from the deck outside.

A great value and high quality experience, most interesting to see the bones of the mountain minus its winter snow and hectic skiing activities.

Named after William Read, a Ruapehu pioneering mountaineer, the rock wall was a crucial landmark for the route up and down Ruapehu for climbers in the early days.    It is now also used for rock-climbing (for the fearless!)

Sticks and a lot of care were needed to walk back down amongst the loose rocks and stones and it was a relief that we didn't need to make use of our first aid kits!
This walk is 30 minutes well spent, definitely a rewarding short journey and although at first glance it looks barren, it was surprising what alpine plants were living amongst the rocks in the harsh environment they have adapted to. 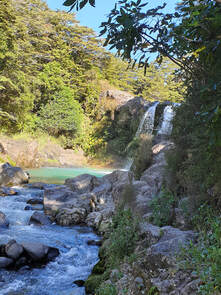 We viewed the falls from a lookout then continued down the track to the bottom, where we found “Gollum’s Pool”, another filming location of Lord of the Rings.   It is where Faramir and his archers watch Gollum fish.

The clear turquoise water in the pool was reminiscent of the glacial waters seen in our South Island rivers and lakes.
DAY THREE : The Old Coach Road
​A crisp, clear morning saw 25 members of the group board the bus well rugged up with layers of merino, scarves, gloves and hats ready for today’s adventure.
​This historic trail was used by horse-drawn coaches in the early 1900s to transport passengers between the two railheads of the unfinished North Island trunk line. The cobbled route became obsolete with the completion of the railway and was lost to the forest for almost 100 years.  Fortunately, it was recently restored.
​We began our day taking a quick peep through the fence at Smash Palace in Horopito before heading down a farm track to the official start of the Old Coach Road. 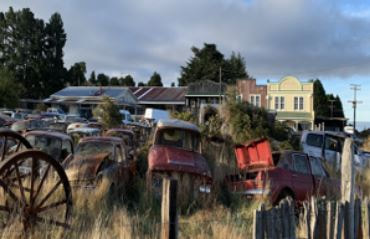 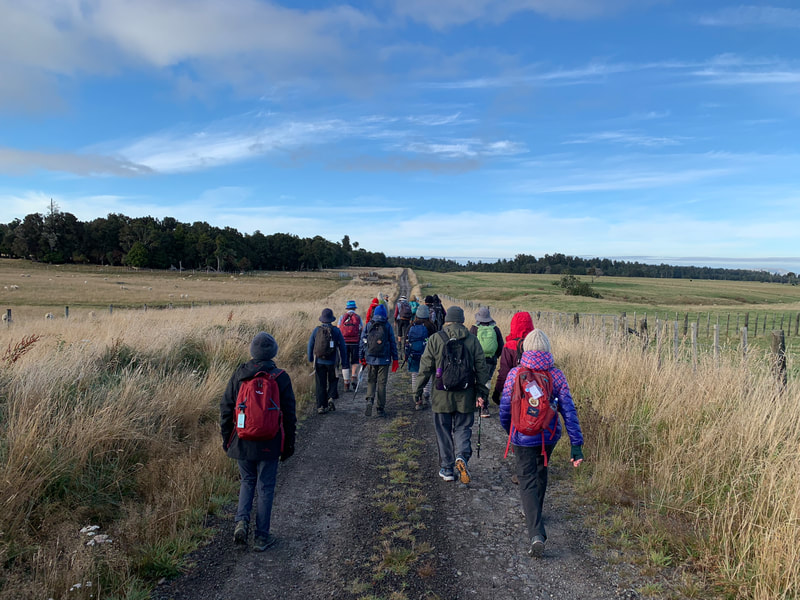 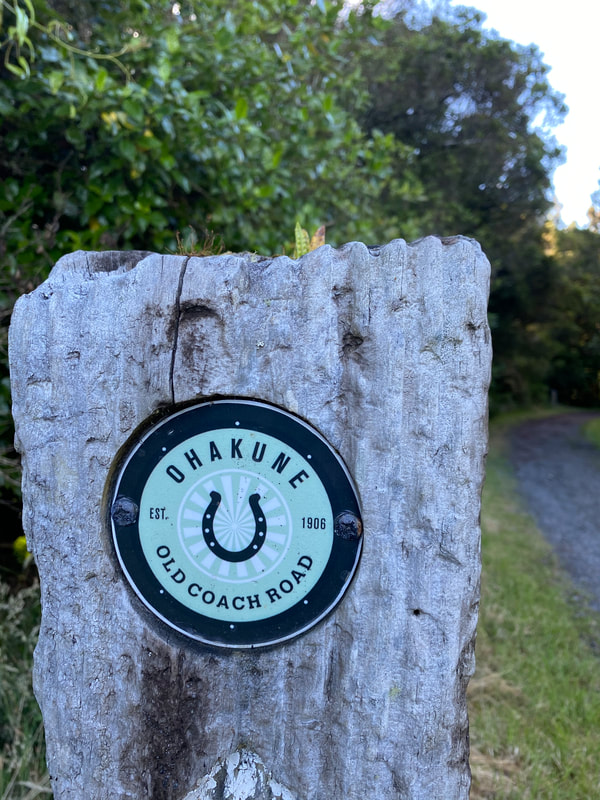 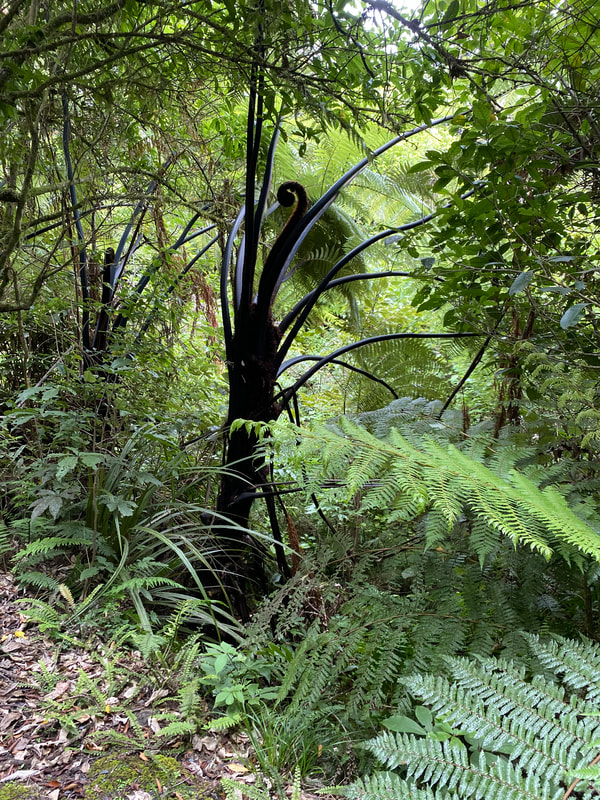 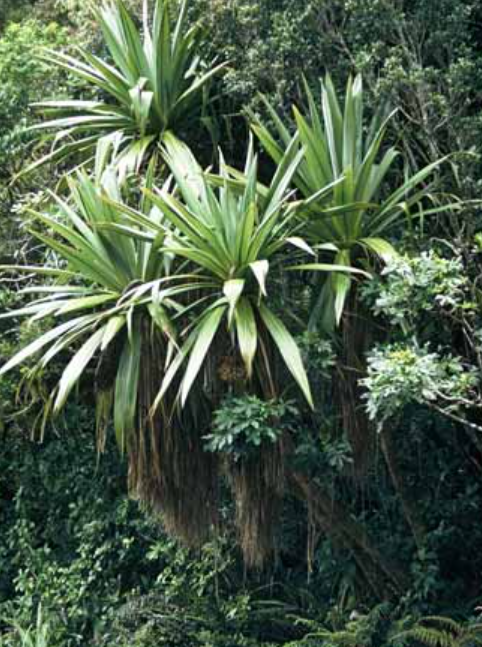 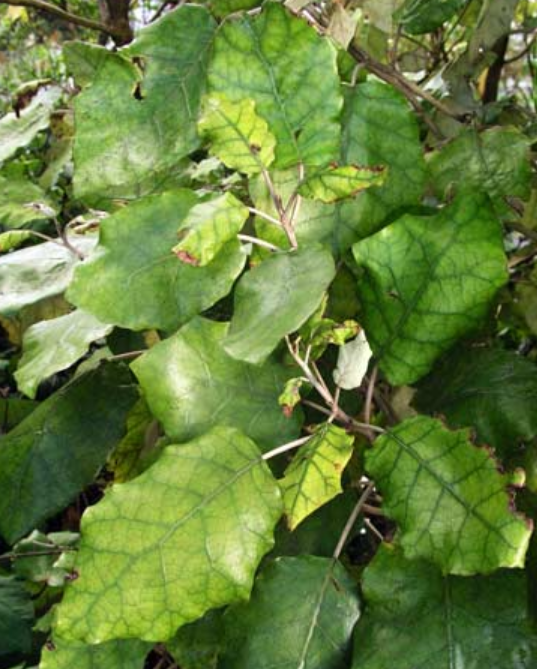 ​We took the short detour to the resting area at Taonui Railway Viaduct. A spectacular view across the stunning red-coloured Viaduct and down into the lush green valley, gave us a glimpse of what to expect when we proceeded on.  A definite group photo opportunity. 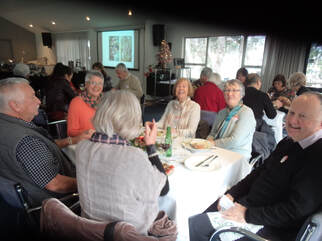 ​The route ambled along passing many historical features, all well signed – the workers’ camps, the tools they used, Te Rongokaupo village, the quarry that provided infill rock and the setts for the road, John Rochfort, the surveyor, and of course the ruins of the Taonui Railway Viaduct and the old curved Hapuawhenua Viaduct – the engineering highlight of the track being 284 meters long, 45 minutes high.  It would be impossible to complete this walk without recognising how busy and hard life was here in the early 1900’s. 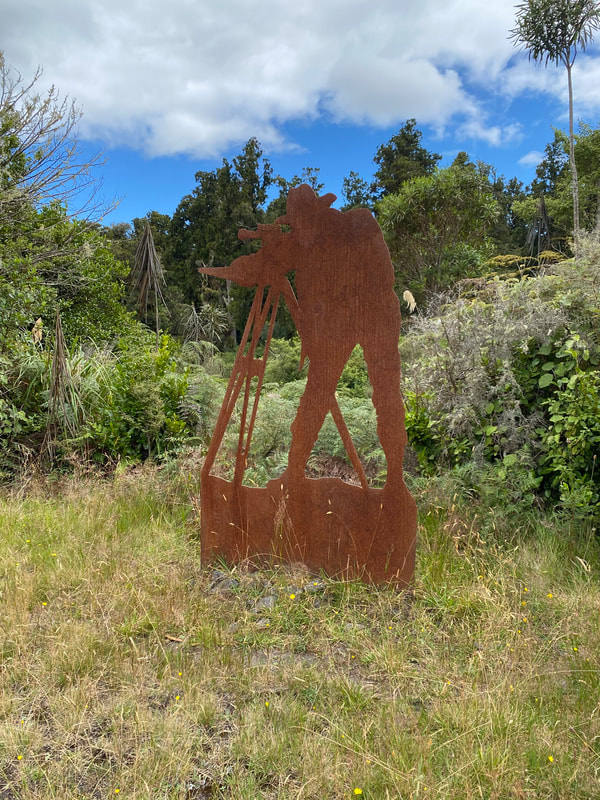 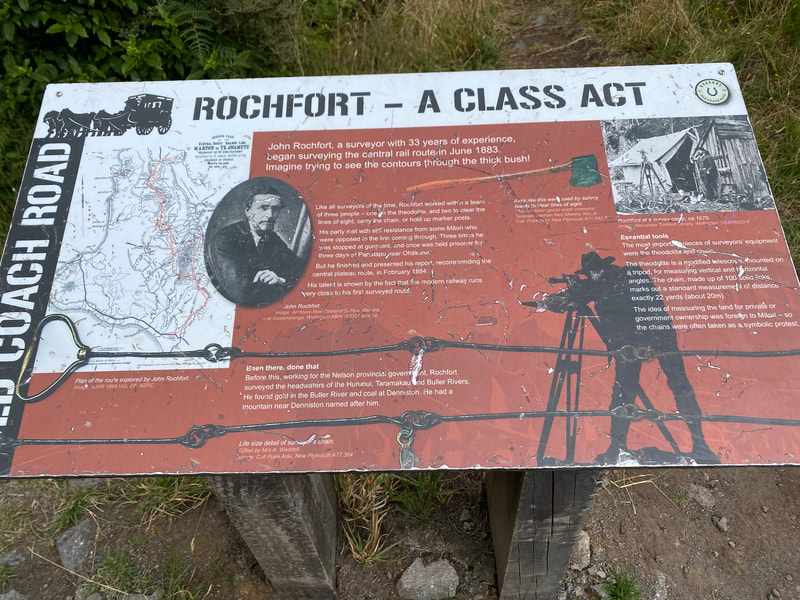 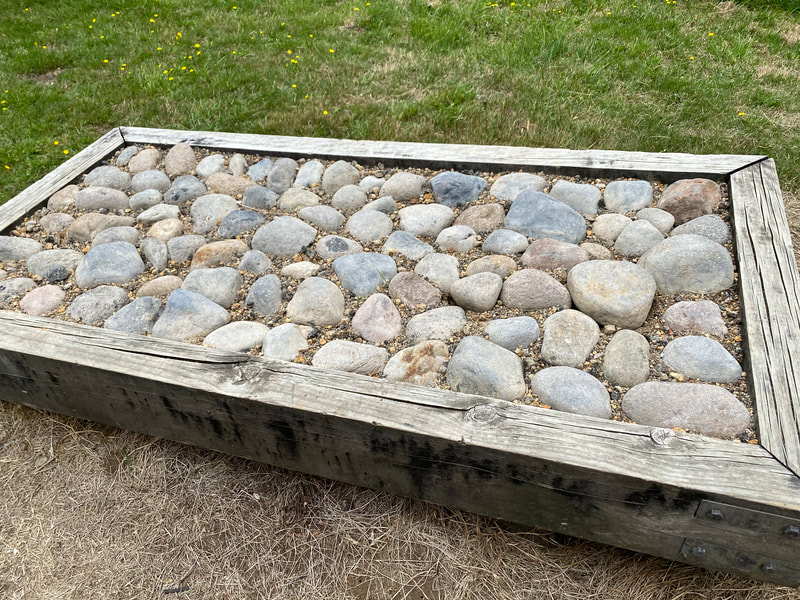 Eight of us who chose not to walk the Old Coach Road had a more leisurely time walking the Mangawhero Forest Track and making a quick visit to the Carrot Adventure Park.

This 3 km forest track begins at the bottom of the Ohakune Mountain Road and follows the Mangawhero River through beautiful forest – masses of crown ferns, astelia, mosses and tree ferns beneath giant rimu, matai and kahikatea.

We heard later that our native whio (blue duck) are sometimes seen in the fast flowing parts of the river, but we didn’t see them.   However we did have a magic moment when a pair of kereru swooped in and poked about a fallen log beside us while we were having a snacks break.    So close!
Adjacent to this walk was a memorial plaque, a sad reminder of the fate of Mollie, the circus elephant, who died here from eating poisonous tutu back in 1957. 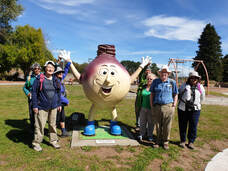 Dominated by the famous giant carrot and various other vegetable characters,  this park has grown over the years to become a “do not miss” place for the whole family.   It pays homage to Ohakune’s past –its forestry,  and the vegetable growing history of the Chinese settlers.

It is a wonderful community asset with gardens, BBQ and picnic areas,  play areas, outdoor exercise equipment, petanque and bike tracks.   A walkway alongside the Mangateitei Stream connects the park with the town centre.

DAY FOUR : Ohakune to Auckland
​Alas, the beginning of the end – time to head home, but we did have some interesting stops along the way.
​Tangiwai Memorial
​
We stopped at the memorial to the worst railway disaster in New Zealand's history.  It occurred on Christmas Eve 1953 when the Wellington-Auckland night express plunged into the flooded Whangaehu River, 8 km west of Waiouru.
The weather on Christmas Eve was fine and with little recent rain, no one suspected flooding in the Whangaehu River.

What transformed the situation was the sudden release of approximately 2 million cubic metres of water from the crater lake of nearby Mt Ruapehu. A 6-metre-high wave containing water, ice, mud and rocks surged, tsunami-like, down the Whangaehu River. Sometime between 10.10 and 10.15 p.m. this lahar struck the concrete pylons of the Tangiwai railway bridge. 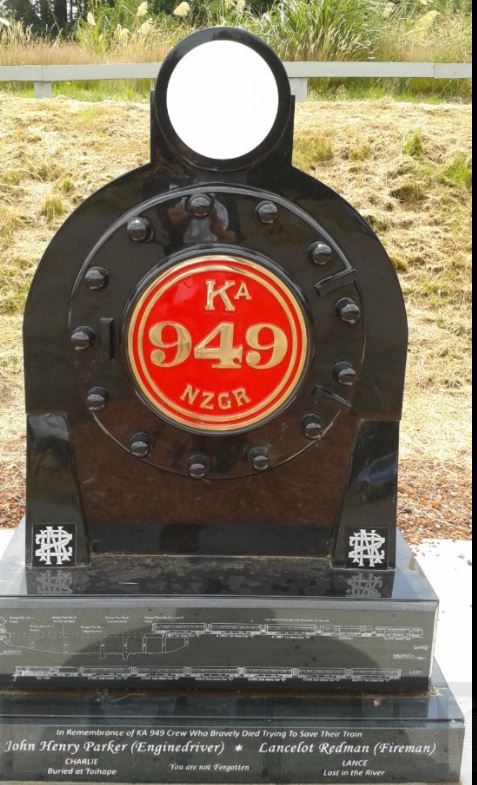 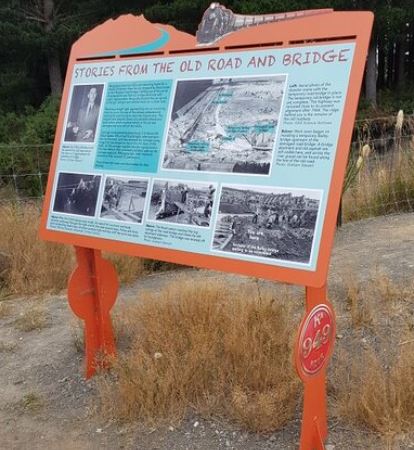 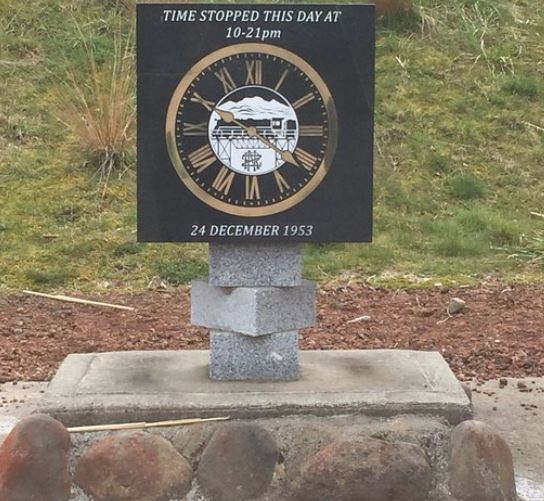 ​Of the 285 people on board, 151 were killed and the tragedy left the country in mourning.

A very sobering memorial and a time for reflection with many signs telling the story.

The sun was out and the view was great – a perfect spot for our lunch stop. 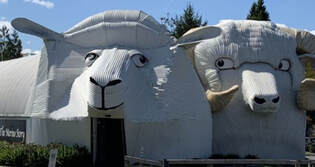 ​A brief stop in Tirau for ice creams and then it was full throttle back to Auckland - a bus full of weary but happy travellers!!