Sunday 27 February 2022:   ANHWC Walk on  WAIHEKE ISLAND - Te Ara Hura walkway
Te Ara Hura  is a 100km walking trail all around Waiheke Island linking a network of tracks. Today a group of 13 club members and several guests walked the“beaches ‘N’ baches section, taking 4 hours.
We started at Little Oneroa Beach  -  Sandy Bay   -  Enclosure Bay  -  McKenzie Reserve - and our destination Palm Beach.   This was generally a single file walk, starting by walking up 120 well formed steps above sea level to commence.   Views on our left already entranced us looking back to Oneroa Beach and the Matiatia northern headland.
This section was through bush, with crickets chirping and birds singing. ​ 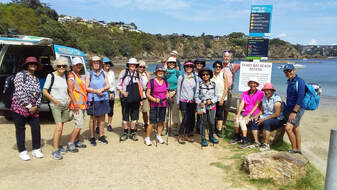 Having reached the highest point of the track, we walked single file along the ‘spine’ of Hekerua Rd, Hauraki Rd, and Karaka Road where inhabitants of Palm beach enjoy magnificent views, up high above the road, or 2-3 houses down off the road in bush clad gullies. Some houses were magnificent, some were quirky baches of yesterday.
Some letterboxes were quirkier. Along this 2km stretch, we enjoyed magnificent views out over to Great Barrier, Little Barrier, Coromandel Peninsula. The sea was a magical still  blue, the air a calm warm 26 degrees.
​The third section was downhill to Sandy Bay and Enclosure Bay. At Sandy Bay, scuba divers were learning their trade, youngsters learning to paddle board, kayak  and sail.

The fourth section was back into the bush up to MacKenzie Reserve sitting on a north facing hillside. Here, Friends of MacKenzie Reserve (a group of enthusiastic locals) are transforming a former pine forest into a special trees and wetlands environment for future generations to enjoy.
​ 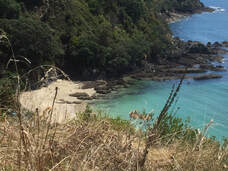 The final section was a steep narrow track (requiring sticks) down to our destination.
Palm Beach is frequented by the locals and out of towners alike, with its calm sea safe for children.  This was a fabulous day enjoyed by all, a walk  with multiple facets of enjoyment.

With thanks to leaders Janet Lowe and Joan King
Text: Janet      Photos: Janet and Frankie 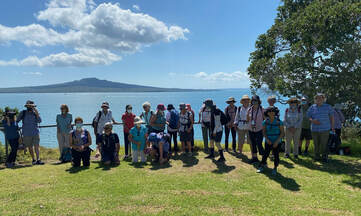 ​It had been a long time since our last walk in August.   Twenty-six of us met outside the ferry terminal at Devonport, and were pleased to finally be together again, and welcome some new walkers. 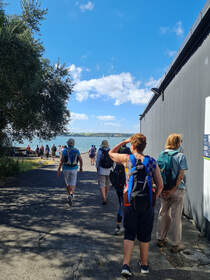 Devonport Waterfront
​
We walked along King Edward Parade, passing the historic flagpole, marking the birthplace of the New Zealand Navy, the Commemorative Sea Wall, a number of impressive buildings in a variety of architectural styles, lava flows and black rocks from the eruption of Mount Victoria, Devonport Yacht Club, and the memorial commemorating the arrival of the Taunui canoe, on the way to Torpedo Bay.

​ Stopping here for morning tea, we had the opportunity to visit the Navy Museum before going to see the salt water rehabilitation pool built in the 1880s. 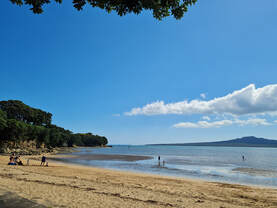 We proceeded along Cheltenham Road, passing historic homesteads, then along Cheltenham Beach, and on to a walkway beside the old naval barracks to the former defence area on Fort Takapuna Historic Reserve. We descended to Narrow Neck Beach, where we stopped for lunch under the pohutukawa trees, looking out to Rangitoto and other small islands.   What a lovely surprise to meet long-time member, Wendy, waiting at the beach to see us for an overdue catchup.
​Devonport was originally almost an island, connected to the North Shore by a causeway, leading to the name Narrow Neck. On the eastern side was the beach, with mangroves on the western side. 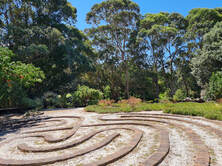 ​
Woodall and Ngataringa Parks, Mount Victoria and Return to Devonport
​
We followed a path inland, with extensive mangroves on one side, on reclaimed land through some welcome regenerating bush, and behind the Waitemata Golf Course. This also is on reclaimed land which was originally used as a horse racing course, and was later converted to a golf course.
From here the road descended past The Vic, the oldest surviving purpose built cinema in the Southern Hemisphere.

​ Our route passed many heritage buildings, many of which are now boutique shops, cafes, and art galleries.

Prior to the descent, seven of us took the option to climb Mount Victoria. We were rewarded by magnificent views across the Waitemata, and also saw the remains of one of the world’s last remaining disappearing guns, which was part of the fortifications at the end of the nineteenth century.

Thanks to our leaders, Lawrie, Viv & Linda for our first walk of 2022!
Text: Viv
Photos: Linda & Sharleen