There were a good number of members interested in this, a new walk for  the Club.  We were met at the main
gate by our hosts for the day, Sean and Jill and we drove around to the start of the walk, where we had a short talk about the history of this property. From there, we went past the clay pits where excavations had taken place to extract silica for use in glass making and fibre board manufacture.

Following an easy track we went downhill a good way before a quick stop for morning tea in thick kanuka forest right beside the thriving mangrove.  There we heard the two- note calls of a pair of fernbirds, rarely seen and rarely heard.  Other birds also added to the melody from time to time, fantails and warblers being prominent among them.

We walked close to the mangrove areas most of the time then, sometimes through bogs, sometimes climbing steeply for short distances, within sight of the Kaipara Harbour all the way. After that, the track went through some very muddy areas, with some steep climbs in places, then followed the coast line for a while, with marvellous views of the Kaipara Harbour.  There we could appreciate the extent of the mangroves around the harbour - vast swathes of it could be seen around every inlet covered in Avicenia marina, the commonest mangrove plant of New Zealand.

Arriving at the beach, we had lunch sitting near comfortable “cushions” of Salicornia, a less common inhabitant of
our mangrove swamps, very well adapted to living in tidal conditions.  From there we could also see the neighbouring property, Gibbs Farm, with its large outdoor sculptures.
After lunch we had a steep climb (isn’t that always the way?) and an undulating track took us to the best part of the day, a bush walk.  Here we saw plenty of young kauri, tanekaha and other natives thriving in a patch of land where pest control was taken seriously!

Finally, going through some paddocks warily watched by steers, we arrived at the Homestead to be treated to a Devonshire tea!

A great day, well organised and thoroughly enjoyed by everyone!
Thank you, Brenda.

Twenty-eight members set off for Port Waikato in high spirits on Saturday morning.  Along the way we did two walks, one going up Mt. William and through the Reserve, then Harker Reserve.  The first was particularly good:  approaching the trig, we passed a thriving kanuka forest, just coming into flower.  In the reserve we saw taraire, kahikatea, nikau and rewarewa in profusion.  Lunch just outside the reserve had the added attraction of our seeing a shining cuckoo, perched on a young kahikatea, and hearing its distinctive call.  Later we saw many forest cabbage trees (Cordyline banksii), some profusely flowering.

Again, kanuka and flowering manuka accompanied us on the way and the tree daisy (Olearia arborescens) was seen in several places.  When we reached Port Waikato, we were tired but happy to have had such a marvellous walk: members helped each other over rough ground: fit walkers accompanied those who were less fit and encouraged them; others stayed back at track junctions to guide those who followed; the true spirit of the club was very much in evidence!

That night, we were treated to a slide show on Seabirds by one of our well-travelled members, Nancy.  Few of us had been to the Galapagos Islands, so seeing the “blue-footed booby” for the first time, even on film, was quite hilarious!  Later we heard a morepork and the first to get up the next morning also saw it!

Finally, we went on to Henrys Scenic Reserve near Patumahoe on our way back to Auckland.  This is a small but beautiful bit of bush that is a testament to what a community working together can achieve!  Many different groups were involved at different stages of the project, but perhaps worth special mention are the local school children, who dragged down all the rocks that surround the bubbling spring.

A wonderful weekend: good weather, good company and good walks, with plenty of natural history to keep us interested.  Many individuals can take the credit for this: Derek, Gail, John and Molly for doing the reccies, John for organising the weekend, Joe our driver and many others who helped in so many ways!  Thank you, all. 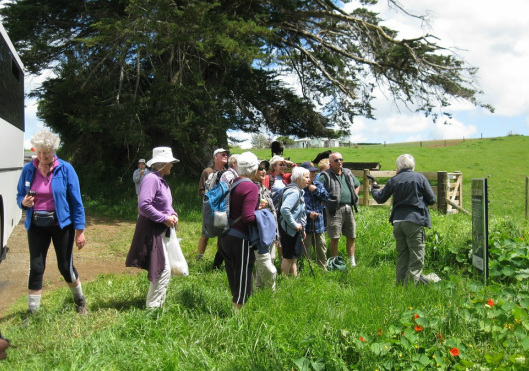 Happy trampers outside Henrys Reserve, not yet ready to get back on the bus for the journey home!

It was a smaller than usual group, we started our walk at Greenwoods Corner to go up the Grangemore Track to the Kauri Knoll.  It was very satisfying to see young miro seedlings scattered about at the knoll, yet again evidence that pest control was having a real effect in this very special part of Auckland.
We saw many, many varieties of mosses, lichens and fungi, we came across lots of hooded orchids and even saw Thelymistra (with unopened flowers), that we had only learnt about during Labour Weekend – a very satisfactory day from the natural history point of view.

Thanks for another enjoyable walk in “our Waitakeres,” John.

The 32 members who set off (with two visitors) were really looking forward to doing this easy – moderate walk on such a lovely day and we were not disappointed.  We first went along the shore to see where scuba divers went into the sea and climbed up to the rocky outcrop there to get some stunning views of Little Barrier Island.

Retracing our steps a little, we then set off uphill on a well formed track, between lines of flaxes.  When we had a short stop for morning tea, we were in the company of several birds, including a green finch, fantails and other small birds.  Many “undulations” later, we arrived at a small pond with marsh vegetation all around it.  Going along a forest road a short way, we turned into another bush track; it was a welcome relief from the heat and we made good time to arrive back at the beach in time for a leisurely lunch. 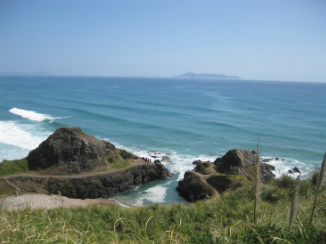 View over rocks at the start of our walk.
The second walk of the day was in Logues Bush, a marvellous walk for the natural historian or for those who want to learn more about our native trees:  name labels placed by trees are very helpful.  There were some kauri, lots of rimu, kahikatea, kanuka, nikau etc. There was also an area of taraire, hard to miss due to loads of its dried, leathery leaves lying on the ground.   Young seedlings of miro and matai were evident too.  Although well past their best, we saw plenty of evidence of green hooded orchids and even a kaikomako with its juvenile leaves shaped like “ducks feet.”